What Is THC Sauce and How Can It Be Smoked? [We’ll Explain]

If you’ve been hearing about THC sauce and you’ve been curious about what it is, look no further! THC sauce is the newest trend to hit the scene and involves a mixture of THC crystals imbued with 15% more natural terpenes.

With this addition, the mixture has a potent THC content and boasts 800 milligrams of pure THC at its base from the crystals and 150 milligrams of the terpenes for a boost that can create a powerful experience. The result is something that isn’t quite crystallized but is instead a “sauce,” hence the name.

It’s not just THC that gives cannabis its punch. In fact, there are hundreds of known cannabinoids that affect how cannabis works for users. When terpenes, THC and many other compounds including flavonoids and phytochemicals interact, they may be more than a little beneficial.

What’s in a Name?: Cannabis Concentrates vs. Extracts

Extracts are created using a solvent such as alcohol or carbon dioxide. This eliminates the trichomes from the plant and what is left can be used as an extract. Concentrates are made much in the same way, except solvents are not used.

Examples of solvent extractions include butane hash oil, Rick Simpson Oil (RSO) and CO2. Each solvent can be further broken down according to texture. These textures include shatter, badder, budder and crumble. Examples of concentrates include rosin, dry sift and kief. 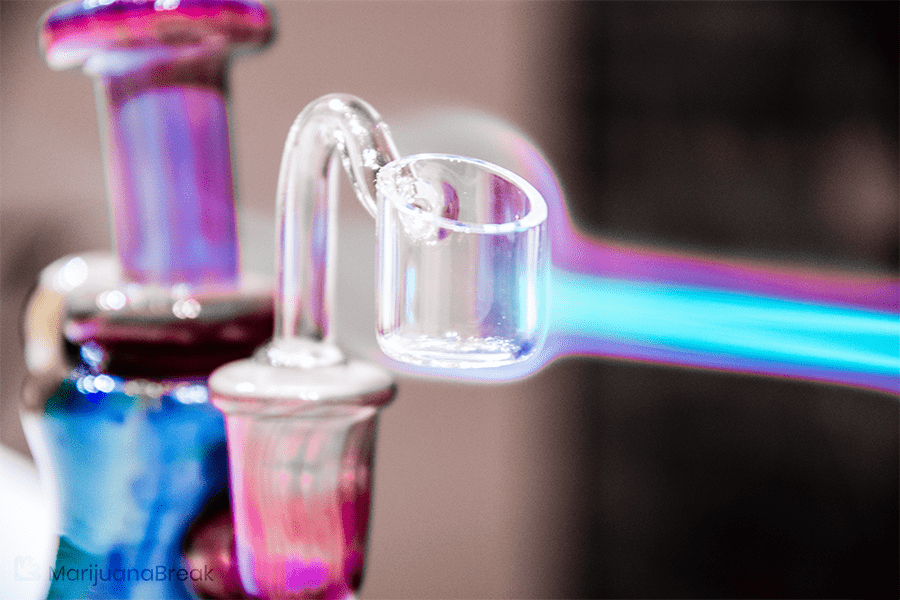 For users not in the know, dabbing can be a great way to get a strong hit of THC. It is often the way that most users get the most from their extracts. These extracts are placed on a hot surface (called a “nail”), heated thoroughly and then inhaled through a dab rig mouthpiece.

A dab rig (also known as an “oil rig”) is a set-up that can be made of a number of materials, including glass. It is a type of bong that allows users to inhale the vapor that comes from the heated extracts. Many users consider this to be a much safer practice than smoking, and they also feel they get a more powerful hit. Most extracts utilize THC to deliver a high that’s not only powerful but long-lasting. Unlike CBD, THC contains most of the psychoactive compounds that marijuana is known for.

THC sauce can often be more than 50% terpenes, though the sauce contains many other contributing phytochemicals and cannabinoids. THC sauce can provide an incredible hit, but and it is considered a full-spectrum experience.

This is because full-spectrum describes cannabis that is whole, including the trichomes. However, THC sauce, even though the trichomes have been stripped away, still contains many of the potent cannabinoids, phytochemicals, and THC.

Terpenes often give foods and plants their aromatic uniqueness. Pine trees often have their smell due to terpenes and so do many citrus fruits. Terpenes often work synergistically with the major components of cannabis to enhance any benefits.

Those who are used to conventional methods of smoking may not be familiar with the kinds of dab rigs on the market. Dab rigs are another way that users can get a hit. Rather than using traditional herbs and nuggets that are the distinction of most cannabis strains like Blue Haze or Hawaiian Punch, many users feel they get more from cannabis by utilizing extracts.

A dab rig is a specialized piece that includes several different parts. Don’t mistake a bong for dab rig, even though they do look very similar. However, dab rigs are often a bit smaller than bongs. Dab rigs are connected to a nail for heating and a “bowl” that holds the extract or concentrate. The biggest difference between bongs and dab rigs is that dab rigs are the best tool to use for concentrates and extracts.

Dab rigs are typically made smaller as the small size makes for less drag and the steam given off can travel to the lungs more efficiently. Dab rigs are also typified by “joints.” These joints are usually labeled “male” or “female”. Other parts include:

Stem: This is the part that moves the vapor from the extract that has been heated from the nail through the water chamber and into the mouthpiece for a hit. Some dab rigs include an “ice pinch” so that users can add ice and cool the vapor.

Water Chamber: The water chamber is where users add water. The stem is usually smaller than the chamber and many water chambers contain a percolator as well. The percolator contains holes that produce a series of bubbles when vapor moves across the chamber. This exposes the vapor to more surface area.

Torch: The torch is a small torch that is typically fueled by propane. It is used to heat the nail on a dab rig.

Nail: The nail is the area that is heated that will turn the extract or concentrate into vapor for consumption. It typically features a flat surface and walls that have a hole. Many nails on the market contain any number of materials, including quartz or ceramic.

There are many kinds of rigs on the market, and there is no one size fits all. Finding the rig that works for you requires users to think about their unique needs, goals, and budget. Users must also think about how they will use their rigs.

Will you be home when you dab; could you use an extensive set-up? Or do you travel frequently and need something more portable? Whatever a user’s situation, these things must be thought out before purchasing.

Why Terpenes in THC Sauce are Great for Dabbing

Terpenes are unsaturated hydrocarbons that are found in the essential oils of all kinds of plants that we eat and use every day. In fact, if you love the smell of oranges or have tried to clean with something pine scented, you’ve been introduced to the power of terpenes. Cannabis also contains terpenes and these compounds give strains their distinctive smells.

Terpenes may be responsible for alleviating pain, helping to boost immune systems, and also may have antimicrobial and antifungal effects. Studies are beginning to demonstrate how they may support bodily systems and day-to-day functions.

The FDA has recognized the benefits and safety of terpenes and they appear in many of the foods we cook and eat. Terpenes are a naturally occurring compound that is often added to many other products we use daily, including perfumes and cleaners.

If you’re curious to know what hydrocarbons are, they are organic compounds that contain both hydrogen and carbon. They are produced in the waxy resin of trichomes of the cannabis plant (usually female) and include several different types of terpenes.

Terpenes enhance and support THC through a process called the “Entourage Effect.” The entourage effect was first discovered by researchers S. Ben-Shabat and Raphael Mechoulam in 1998. They studied the ways the endocannabinoid system or ECS worked alongside a plethora of molecules and compounds including terpenes.

The ECS is responsible for regulating our day-to-day biological functions, including memory, movement, and pain. The ECS functions primarily in the nervous system and the brain. Particular phytochemicals, along with terpenes, may provide many different benefits, including improving the absorption of THC and other materials across the blood-brain barrier.

Users state that THC sauce is the best thing to have happened to dabbing. Anecdotal reports suggest that dabbing THC sauce gives a quick and explosive high. This is quite different from a high that slowly builds in intensity. Instead, THC sauce kicks it up a notch and has a heady, nearly immediate effect.

Many users state that THC sauce (sometimes termed “terp sauce”) is potent as it is not a nucleated shatter. Nucleated shatters tend to be what happens as the elements seek to get to where it was in its first state and many of the compounds separate instead of there being a nice, smooth consistency.

Users describe the sauce as having a great flavor and having an explosion of power behind it. Terpenes enhance many of the chemicals found in cannabis, and THC is no exception. Terpenes work to engage many of the brain’s receptors and help to support THC’s psychoactive effects. Therefore, users get a pure and intense high without sacrificing many of the elements known to provide support.

THC sauce is more than just a quick hit of THC. It contains a host of other powerful chemicals and compounds, including flavonoids and terpenes. Terpenes are responsible for how our foods and cannabis smell.

Terpenes are found in the essential oils of plants and are produced in the resinous trichomes of cannabis. They may have an impact on bodily systems and may help relieve pain, as well as having antifungal and antimicrobial properties.

Terpenes work in conjunction with many of the elements of cannabis, including THC. Although there are several hundred chemicals and cannabinoids in cannabis, it is suggested that there are several kinds that have incredible benefits and properties. These compounds include the terpenes myrcene, humulene, caryophyllene, linalool, limonene, alpha-pinene, and beta-pinene.

The way that terpenes work is through a process that supports the actions of many of the components of cannabis. This process has been termed the “entourage effect.” The terpenes in THC sauce work hand-in-hand with THC to help alleviate depression, aches, and pains and other symptoms.

However, be aware that this sauce may not work for everyone. Each individual will be working from their own experiences, physical and psychological status. There may be side effects, including dizziness, paranoia and dry mouth. Each hit of THC sauce may be slightly different and the positive effects may vary according to how much has been dabbed and individual preferences.

Overall, if you’re looking for a new way to get an effective and powerful hit of THC, “the sauce” may be the answer. It is filled to the brim with more natural terpenes along with THC and essential cannabinoids.

Though you may be used to a more crystallized form of extract, this particular substance has a distinctive sauciness that many are beginning to recognize. It is a good option to look into if you’d like to try something different.

Related Articles
Does CBD Help with Stretchmarks? [The HONEST Answer]

0
5 min read
CBD and Cannabis Laws in Idaho: All You Need to Know

0
6 min read
Does Cannabis Cause Bronchitis? [Revealing the Truth]

0
5 min read
The Rise of the Pot-Bots: Things to Know

12
3 min read
How Many States Is Recreational Marijuana Legal In?

4
5 min read
Is It Illegal to Grow CBD Plants?

5
8 min read
The Difference Between a Joint, a Blunt, and a Spliff