Written by Tiannah Pedler, M.A.
5 min read
0 comments
Read Later
Overview
Spaghetti Bolognese is one of the best comfort foods around. It’s warm and inviting, so the only way to make it better is to add cannabis. Pair it with an indica strain while you snuggle up on the couch and settle in for the evening. 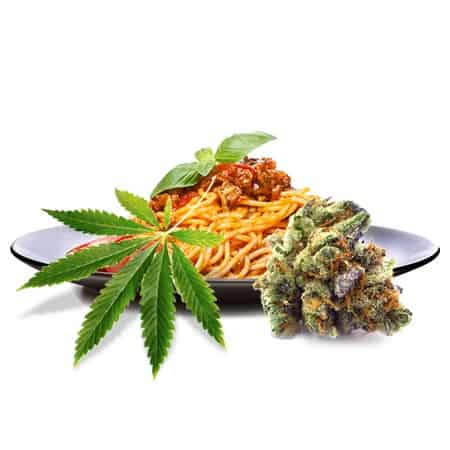 When you’re feeling low and need a culinary hug, a spaghetti Bolognese is the perfect meal. It’s very quick and easy to prepare, with no cooking skills really required, adding to that comforting feel. Plus, it’s probably a recipe your mom used to make, so it feels familiar and pleasant.

There’s only one thing that could take this classic dish to the next level: Weed. If you’re feeling low, a cannabis edible might help you to feel just that little bit better. After all, many MMJ users use marijuana to combat anxiety. While there is no guarantee that it would work for you, some pot might take the edge off that low mood.

So, on those Friday evenings after a long week at work with deadlines weighing you down, try this spaghetti Bolognese recipe infused with your favorite cannabis strain. It’s ready in less than 40 minutes, so it won’t be long before you can settle down and unwind.

Canna-oil is the primary ingredient that you need to transform this meal into an elevating edible. It’s also, unfortunately, the most time-consuming and challenging thing to prepare. If you plan on cooking marijuana edibles often, it’s advisable to prepare canna-oil in advance. Set aside three hours or so to do this.

To make canna-oil, you’ll need to grab your favorite cannabis strain for this – we cover the best strains to use for this recipe below. That said, remember that you can use any strain you like!

How to Make Canna-Oil for This Recipe

Before you make this cannabis spaghetti Bolognese, you’ll need at least a tablespoon of canna-oil. Making canna-oil is a pretty simple process, but it is time-consuming. You’ll need to grab a crockpot or slow cooker, some cooking oil, and your favorite cannabis strain.

First, decarboxylate your weed. You need to grind it up coarsely, using a hand grinder. Scatter the ground buds on a baking sheet and place it in the center of a pre-heated oven at about 220˚F and cook it for 30-45 minutes. This process of heating converts the cannabinoids into their active form, turning THCA into THC and so on.

After decarboxylating, heat your oil of choice in a large crockpot or slow cooker. You can use any oil of your choice. Olive oil will always taste better, but it can be more expensive; if it’s unaffordable, use vegetable oil.

Heat the oil over medium heat, simmering it but never allowing it to boil. Once it’s hot, add the decarboxylated cannabis buds. Then, allow the oil mixture to cook for about 2 hours, stirring occasionally. Be careful never to let the oil boil, so check on it regularly.

After about 2 hours, the cannabinoids will be suspended within the oil mixture. Strain it through a cheesecloth into a jar to remove the plant matter. Then, you’re left with delicious canna-oil!

Canna-oil will keep like regular cooking oil, so it’s always best to prepare it in advance. That way, your cannabis spaghetti Bolognese will be ready in a flash!

There is no best strain to make edibles with; it depends on your preference and the effects that you desire. For this recipe, we recommend using a tasty indica. As you snuggle up in the evening, ready to unwind, an indica will help you to relax completely. Eventually, it will put you to sleep as you doze off right where you are.

Some of the best indica strains (in our opinion) include:

There are plenty of sweet-tasting indicas out there, but these are not ones you want to use in savory edible recipes. Instead, stick to options like the strains above.

Northern Lights, for example, is a really classic marijuana strain renowned for its typical indica effects. With THC levels of around 20% and a pungent aroma, users enjoy Northern Lights because it leaves them feeling contented and mellow shortly after using. It’s also popular for those who often suffer sleepless nights. As for its flavor, it is earthy and piney with just a tiny hint of sweetness, making it perfect for a savory edible recipe.

Try to select a strain that has notes of pine, herb, and even lavender.

Those with just a hint of spice or sweetness play on the tomato flavors of a bolognese sauce and blend seamlessly with the taste of your food.

If you get it just right, you won’t even know you’re eating pot!

The two components that form a spaghetti Bolognese are, obviously, the spaghetti and the Bolognese. A Bolognese is a meaty tomato sauce, but you can also make it vegan-friendly by using a vegetarian mince substitute.

To go along with your spaghetti Bolognese, you can serve some delicious garlic bread. For culinary experts who want to go one step further, you can make canna garlic bread by melting cannabutter and garlic together and smearing it on a crispy baguette.

Also, top your spaghetti Bolognese with a few sprigs of basil and a generous helping of Parmesan cheese. Trust us; it will taste amazing!

This marijuana spaghetti Bolognese recipe is super easy to make and requires very few ingredients. Prepare your canna-oil in advance and get ready to make a delicious meal that you’ll eat time and time again. You can also make this recipe vegetarian-friendly by swapping out the mince for a vegan-friendly alternative. 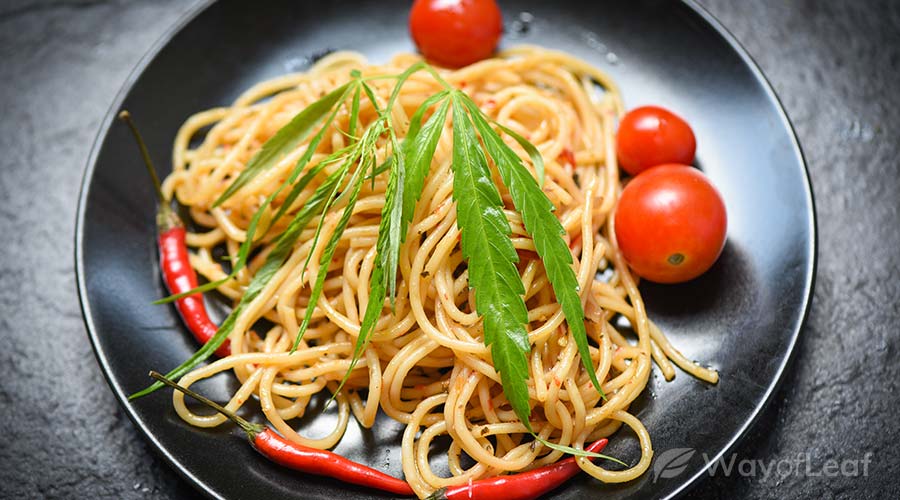 Cannabis-infused spaghetti Bolognese is a mouth-watering way to get a dose of marijuana into your day. It’s the perfect comfort food, featuring indica cannabis as a way to settle down and drift soundly off to sleep.

Remember to only include as much THC as you can handle. Since cannabis edibles take a while to kick in, you also need to be careful about how much you consume. And, as always, don’t forget to tell any guests you’re serving that they’re about to dig into some cannabis.

Baked Canna Banana Bread | How to Make It

How to Make CBD Gummies

Tasty AND therapeutic? It can't be so...

How to Make Weed Infused Chocolate

Why not give it a try?

5 THC Recipes that Will Definitely Get You Crazy High