Where to Buy Medical Cannabis in Florida

Florida finally legalized medical marijuana in November 2016. An incredible 71% of residents voted in favor of Amendment 2. It came two years after the same vote failed. The initiative initially legalized MMJ for patients with ALS, PTSD, AIDS, glaucoma, and a few other conditions.

After protests against the new legislation in certain quarters, Governor Rick Scott signed the bill into law in June 2017. However, it took a considerable period for Florida to allow qualified patients to use MMJ finally. Indeed, up until March 2019, it was illegal to smoke cannabis in the state.

Today, the program is relatively well-established. Moreover, there are over 645,000 MMJ patients in Florida, making it America’s largest medical marijuana market.

It costs $75 to apply for a card and you can only purchase cannabis products from a licensed Medical Marijuana Treatment Center (MMTC). This guide looks at the different locations where MMJ is available. We also look at the top-performing brands

We hope this article proves useful to some of you!

Vertical Integration – Does It Hurt the Market?

At present, there are over 410 licensed dispensaries in Florida. Few states, even those that offer recreational marijuana, earn more marijuana tax revenue than The Sunshine State. 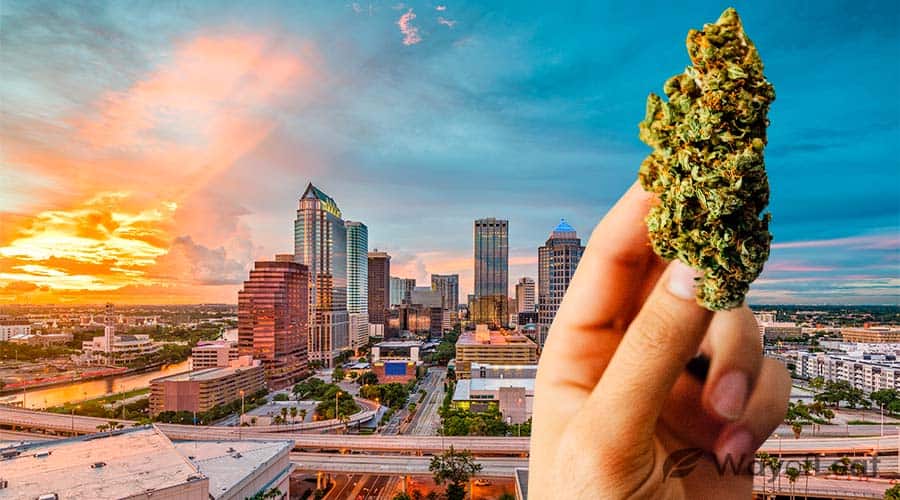 However, its vertical integration model has effectively created a monopoly. It requires cannabis companies to be responsible for every aspect of the business. This includes growing, transporting, and selling. There is no allowance for cooperation or subcontracting, barring a handful of exceptional circumstances.

Consequently, it is practically impossible for anyone outside a major brand to get involved due to the expense involved.

It seems as if the current vertical integration system is creating a cartel of companies with deep pockets.

According to an MMJ company called Florigrown, the Florida legislature’s decision to pass SB8A, requiring vertical integration, violated Amendment 2. After all, Amendment 2 allowed companies to have different licenses for cultivating, processing, and selling.

However, the Florida Supreme Court overturned lower court rulings that SB8A was unconstitutional in May 2021. Therefore, vertical integration remains in Florida.

Thanks to this model, a handful of brands control the market. As a result, there are only 15 active retailers of note despite the fact there are 400+ dispensaries. Most states with significantly smaller MMJ programs have far more businesses in operation. Furthermore, the top three brands account for about 50% of operating dispensaries and over 65% of sales.

In Florida, some companies have purchased licenses for over $65 million! Small, independent organizations have no chance of getting involved in the industry.

The vertically integrated system means that, in theory, the cannabis you get in one dispensary should vary significantly from others. One would hope this would result in high-quality marijuana across the board. However, as the MMJ industry is such a closed shop, there is a danger of the standard falling.

What Can an MMJ Cardholder Buy in Florida?

At present, the law states that a physician can’t certify more than six 35-day supplies of smokable marijuana for a single patient. In rare cases, a patient can ask for an exception from the Florida Department of Health. Incidentally, a 35-day supply is capped at 2.5 ounces.

Also, MMTCs cannot sell more than a 70-day supply of marijuana in all forms at one time. Cardholders are allowed to possess a maximum of four ounces of smokable cannabis at one time. The MMJ law does not permit cannabis cultivation, so you have no option but to visit an MMTC.

Dispensaries in Florida are not the same as those in locations such as Colorado. You will not see the product in glass jars for inspection. Instead, the cannabis is packed tightly in containers, meaning you can’t see the standard of the product. Also, it is sold by strain and weight, so patients don’t have the option of browsing through jars to see the best-looking cannabis. 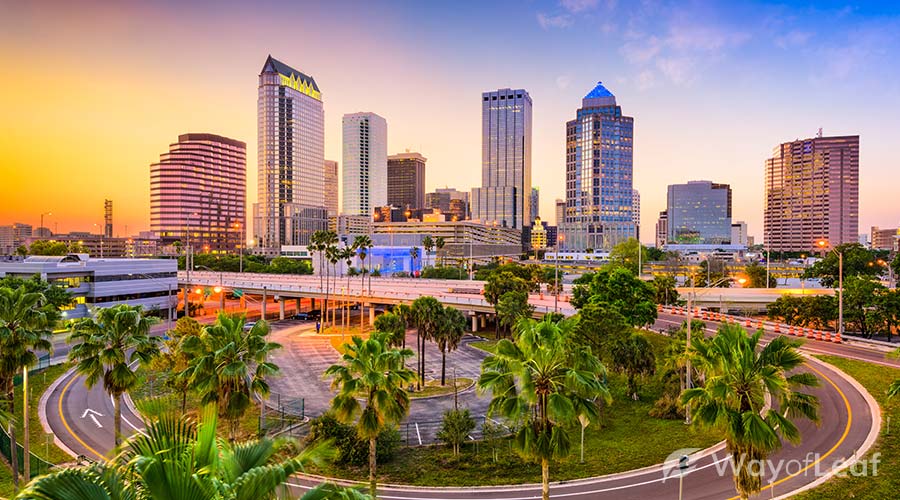 Dispensaries are dotted around the state, but you may still face a lengthy drive depending on where you live. The law also entitles MMJ patients to purchase “delivery devices” for their smokable marijuana. This means you can buy bongs and pipes in MMTCs.

Aside from smokable flower, you can purchase extracts, oils, and tinctures. Furthermore, the state government eventually released guidelines regarding edibles in Florida. MMTCs can only sell edibles with a maximum of 10mg of THC per serving and 200mg in total. Patients under 21 can’t purchase edibles with a THC of over 10%. Also, you can’t purchase edibles until your MMJ doctor specifically adds them to your recommendation.

Where Can I Purchase MMJ in Florida?

Here are the brands with licenses to actively grow, process, and sell cannabis in Florida. The number of dispensaries is approximate.

As you might expect, Miami residents have access to many dispensaries. Eleven of the brands mentioned above have at least one MMTC in Miami-Dade. Ten organizations have a presence in Tallahassee, while eight have MMTCs in Lakeland.

There are 27 dispensaries in the Miami-Dade area. You should find 18 in Jacksonville, 11 in Tallahassee, and 10 in the Bonita Springs region.

Who Leads the Florida MMJ Market?

The Florida MMJ market is worth around $1.3 billion per annum. As you can see from the above chart, Trulieve dominates the market and currently has almost 50% of the market share in Florida. Initially, companies were only able to have 28 locations. However, the law changed, and Trulieve has pounced. It has surged ahead of its chief rivals regarding dispensary numbers and quickly exceeded the 100 MMTC mark.

Top-ranked dispensaries in Florida, like Trulieve, are watching the dollars flow in what is becoming a booming market.

Trulieve has over one-quarter of the state’s active dispensaries but accounts for half the sales. It is also a clear market leader regarding THC concentrate and smokable flower sales. Trulieve’s dominance only became apparent in early 2020. It posted four of its strongest five weeks in Florida in February and March 2020 and has only grown since.

In October 2021, the brand confirmed its acquisition of one-time rival, Harvest, making Trulieve the world’s largest and most profitable marijuana company.

What Is the Best Dispensary in Florida?

Although Trulieve is the clear #1 in size, it doesn’t necessarily offer the best customer experience or best products. Indeed, most Floridian publications generally classify the brand as mid-tier. The majority of lists featuring the top dispensaries in Florida seldom have more than three Trulieve dispensaries and perhaps two in the top five.

In terms of brands, here is the consensus top five in Florida:

Medical Marijuana Dispensaries in Florida: Which Store Is #1?

This is subjective, of course, but according to numerous reviews, here are the top five dispensaries in Florida by brand and location:

Florida has finally allowed its medical marijuana market to grow. However, the existing vertical integration system is bad news for competition. It ensures that only huge corporations with seemingly limitless funds can even enter the market, let alone thrive. There is no way for a small entrepreneur to get involved, with licenses alone likely costing $30 million+. Newcomers must also control growing, processing, testing, labeling, and selling.

If Florida were to legalize recreational cannabis, things might change, though full legalization seems unlikely in the short to medium term. At least, if you’re an MMJ patient in Florida, it is now easy to purchase what you need.

Don’t have an MMJ card yet? Find out how below.

Related article
How to Get a Medical Marijuana Card in Florida

Is it worth a visit?

Veriheal Online Medical Marijuana Recommendations Veriheal is a top-rated online source for people seeking a medical marijuana card (MMJ card). They work in collaboration with state-licensed physicians across the U.S., as well as numerous legal medical marijuana dispensaries. Simply put, they help to eliminate a lot of the hassle and headaches that come along with doing […]

Medical marijuana was legalized in Nevada in November 2000. When Question 2 was asked in November 2016, 54% of voters said ‘yes’ and weed became legal for recreational use in the state. You are also allowed to grow cannabis, but only if you live more than 25 miles from a dispensary. With cannabis now legal […]

About NuggMD New York We’ve known NuggMD for quite a while and are constantly gloating about the level of professionalism and of service they provide to their clients. When we heard the news that they were opening in New York, we simply had to see if their new service lived up to their similar San Fransisco […]

Trulieve [Reviewing This Florida Based Dispensary]

All about the FL dispensary

This mountain covered state is known for good weed!