How to Get an MMJ Card for ADHD

For the last several decades, marijuana has only ever been seen as something inherently evil, worthy of campaigning and legislating against. However, thanks to recent shifts in public awareness, marijuana is now being used to treat all sorts of different medical conditions; all you need is a handy medical marijuana card.

The problem is that many people find themselves unsure of how exactly to go about getting their own medical marijuana card, especially for specific conditions.

How Could Cannabis Help with ADHD?

ADHD, or Attention Deficit Hyperactivity Disorder, is one of those conditions that is frequently over-diagnosed in school children, a kind of catch-all diagnosis that means that a child can be medicated against acting out.

However, it is actually a very real and significant condition that causes a massive reduction in attention, focus, and organization. People with ADHD struggle with any tasks that utilize executive functions and require any kind of physical or mental organization.

Scientists primarily believe that it is caused by the dopamine and norepinephrine receptors in the brain being unable to properly accept stimulation, resulting in a mal-adjusted reaction to external stimuli, whereas still others think it is simply genetic. Regardless of its cause, it is a severe mental disorder that plagues hundreds of thousands of people across the world.

Usually, ADHD is treated using medication like Ritalin, but these have severe ramifications for users, such as intense addiction and even the possibility of serious side effects. This is primarily why many users with ADHD have begun using marijuana to treat their condition.

Many studies, such as this qualitative analysis of ADHD and cannabis use, have pointed towards marijuana being effective at helping suppress ADHD symptoms and allowing sufferers to assimilate into normal life. By encouraging the release of dopamine and other helpful neurochemicals, marijuana users are able to combat their ADHD and treat their symptoms.

So how exactly do you get yourself some marijuana? Though it is legal in ten states to buy it from retailers, in the majority of the USA you need a medical marijuana card.

A Medical Marijuana Card: What Is It?

The exact amount of marijuana you are allowed to buy is determined by your doctor and by your condition, as well as the laws of the state you are in.

Let’s take a look at how you can get yourself a medical marijuana card in the USA for the purpose of treating ADHD.

How to Get a Medical Card for ADHD

The big problem with getting legal marijuana is the issue of state legislation; as each and every state has its own specific set of criteria that determines whether or not you can get a medical marijuana card, a lot of people find it very confusing how to actually get started with the process.

There are two fundamental ways to get a medical marijuana card in any of the 33 states that have legalized medicinal marijuana: Either by visiting your doctor or going online.

Getting a Medical Marijuana Card for ADHD Online

The option to get a medical marijuana card online is limited to only a few states with the laxest laws on medical marijuana, as it allows you to quite literally fill out a form and get the card mailed to you.

California is famous for its complete disregard of security measures in their resident’s cannabis use. Although they have recently completely legalized recreational marijuana, back when they only had approved medicinal marijuana it was incredibly easy to get a medical card at literally any point. 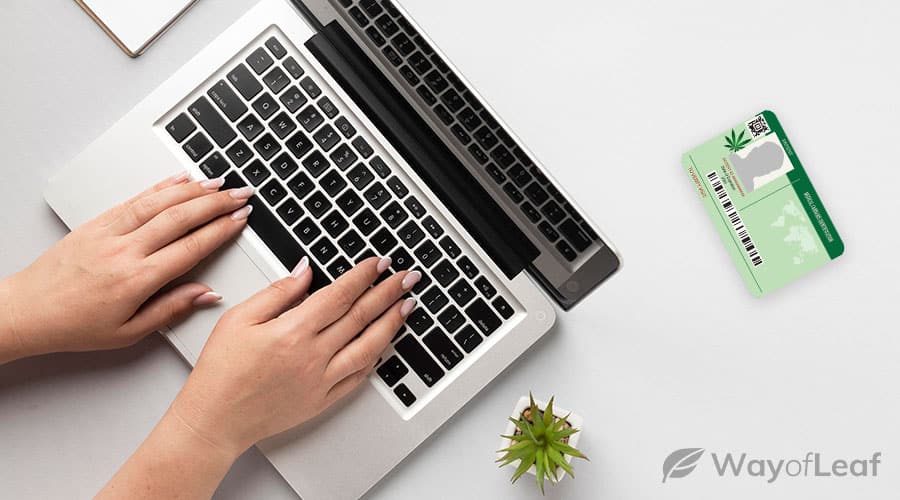 If your state allows you to get your card online, simply go to your state government’s website and find the relevant section for applying for a medical marijuana card. It will ask you all of your information, as well as checking your state identification; as is often the case, it will require you to prove that you actually reside in the state in question.

When it asks you what condition you are hoping to treat with a medical marijuana card, you merely need to input “ADHD” and provide a short description of your symptoms – this will usually be all you need.

However, this online system is limited to only a few select states, so if you live in a state that doesn’t allow you to this, the process is a bit different.

Getting a Medical Marijuana Card for ADHD in Person

If you are looking to get one to treat your ADHD, you are going to need two things: Your state identification, and proof that you have ADHD. This means prescription medication that you have previously been taking, as well as any written evidence of your condition.

This is vital because, even though your medical records will obviously demonstrate that you have ADHD, it is ultimately up to your doctor as to whether or not he gives you a medical marijuana card.

Despite the fact that your state has medical marijuana, it is entirely possible that your doctor will not agree with the use of marijuana to treat your condition. Even though this might sound unfair, it is ultimately your physician that gets the final say on whether or not you have access to medical marijuana.

You might get lucky and find yourself with an understanding, socially aware doctor who understands the usefulness of marijuana in treating a myriad of different conditions. Or, if you are unlucky, you might find yourself with a much older doctor who still believes that marijuana is somehow related to the devil or is, in general, an evil substance.

The more evidence you can bring to back up your condition, the better – if you are particularly worried about what your doctor might say, you might even consider printing off some studies to try and prove to your physician why marijuana is useful to you (such as this one, or this one), but just be warned that there aren’t nearly as many studies that have been published concerning marijuana and ADHD as there has been for other mental disorders like anxiety and depression.

However, one of the great benefits of the medical system in the USA is that you can shop around; if you find that the physician assigned to you isn’t being helpful, you can simply get a second opinion and have another doctor prescribe the marijuana for you. This happened a lot in the states of California and Colorado before they legalized marijuana completely – you could find all manner of different tiny physician offices in popular city hotspots, all advertising that they would give you a medical marijuana card no matter what was wrong with you.

This means you can also get a medical marijuana card without a condition if you are willing to be a little creative with what kind of symptoms you are having. Using the example of California again, there was a sharp rise in reported incidences of “severe headaches” once medical marijuana card dispensaries started springing up along the Venice Beach boardwalk.

Ultimately, as long you go into your physician’s appointment with plenty of conviction for getting a medical marijuana card, as well as evidence of your condition, then you likely won’t find it too difficult to convince your GP to give you a card.

Getting a medical marijuana card can, in some ways, feel like you are doing something inherently wrong. Thanks to the reluctance of many doctors to fly in the face of normalcy, it can sometimes seem like very few doctors actually want to give marijuana to their patients.

This can leave you feeling like you are doing something dirty or wrong in trying to get hold of some medical marijuana.

However, it is incredibly important that you ignore this feeling – you are doing nothing wrong in trying to get yourself some medical marijuana; you are only trying to help yourself.

Even though many people remain suspicious of marijuana, it is imperative for you to try whatever you can to treat yourself and improve your mental health, even if it means getting a medical marijuana card and treating yourself with marijuana.

What’s more, it isn’t anywhere as difficult as it used to be; as long as you follow these tips and come prepared with the right information, you’ll be buying medical marijuana in no time.

Can a Minor Apply for a Medical Marijuana Card [And Is It Safe?]

Know this before you apply

How to get medical weed for free

Want a Medical Marijuana License While Pregnant? What to Know

How to Ace Medical Marijuana Evaluations

Come prepared to your evaluation