Hemp was one of the first crops cultivated by humankind. Archaeologists found evidence of hemp growing in modern-day China and Taiwan dating back 10,000 years! For the next 9,900 years or thereabouts, there were minimal issues associated with cultivating the crop.

However, in the 20th century, the American Government decided to ban hemp and marijuana cultivation. Both plants come from the same genus (Cannabis) and species. As a consequence, they are taxonomically speaking, the same plant. However, hemp contains little of the THC cannabinoid that causes an intoxicating high. Its primary cannabinoid is CBD, which offers many potential benefits without intoxication.

For the likes of Harry Anslinger and the Federal Bureau of Narcotics, none of this mattered. The anti-marijuana propaganda war reached its height in the 1930s. Both hemp and cannabis were poorly understood. The level of hysteria against these plants was such that prohibition was inevitable. The Marijuana Tax Act of 1937 made hemp and cannabis illegal throughout the United States.

Then, America used its international influence to ensure almost complete global prohibition. This was the state of play for another 80 years. Finally, there was a breakthrough in 2018. However, does this mean you can grow hemp at home in any American state? Read on to find out the answer.

The Lead-Up to Legalization

Despite the ban, the U.S. grew the crop during World War II as part of its Hemp for Victory program. In 1957, farmers in Wisconsin planted the last commercial hemp fields of the 20th century. The 1970 Controlled Substances Act classified hemp and marijuana as Schedule I drugs. This led to strict regulations on the cultivation of both crops, and severe penalties for anyone caught growing it.

The ban led to a shortage of hemp products, which led to the United States importing food-grade hemp seed and oil in 1998.

The 2004 Hemp Industries Association vs. DEA case led to a critical, yet seldom mentioned development. The Ninth Circuit Court ruled in favor of the hemp industry. Its decision permanently protected the sales of hemp foods and body care products in the country.

In 2007, a pair of North Dakota farmers received hemp licenses, the first granted to anyone in half a century. The appetite for legal hemp grew. In 2014, President Obama signed a Farm Bill. It permitted research institutions to begin growing hemp in ‘pilot programs.’ However, it did not legalize commercial cultivation.

In 2015, the Industrial Hemp Farm Act was introduced in the House and Senate. It was the first of numerous attempts to legalize hemp fully. The following year, the United States Department of Agriculture (USDA) awarded a Colorado farm an Organic certification for hemp. All roads were leading to legal hemp, and the big day finally arrived.

Does the Farm Bill of 2018 End Prohibition?

The answer is ‘yes’ in a federal sense. President Trump signed the Farm Bill (Agricultural Improvement of 2018) into law on December 20, 2018. It removed the hemp plant, along with its seeds and derivatives, from the Controlled Substances Act.

Although it allowed hemp growth throughout the United States, there was no obligation for every location to acquiesce. To implement the process, each state has to submit its hemp program plan to the USDA for approval. Once the USDA approves it, the state can proceed. At present, only Mississippi and Idaho are holding out. The other 48 states have all completed the process, and farmers can plant hemp crops.

There are a few caveats. First of all, farmers must apply for an exclusive hemp growing license. Without it, they are breaking the law if they try to cultivate the crop. Also, all industrial hemp must contain a maximum of 0.3% THC. Unfortunately, hemp that exceeds this amount is destroyed.

This is devastating news whenever it happens. Apart from the cost of a license, hemp production is extremely labor-intensive. Newcomers to the industry must spend tens of thousands of dollars on new equipment and retrofits.

It is potentially extremely lucrative as at least 80% of hemp grown in America is for the CBD industry. Curiously, the Farm Bill of 2018 did not legalize CBD or any other cannabinoids. Nonetheless, it is sold in the vast majority of states.

The Farm Bill relates specifically to commercial hemp growing. Therefore, it begs the question: Are you allowed to grow hemp at home?

Is It Legal to Cultivate Hemp for Personal Use?

Logically, the answer is ‘yes,’ right? After all, it is federally legal to grow hemp on huge farms as long as the crop contains less than 0.3% THC. Ever since December 2018, people around the U.S. have become excited at the prospect of growing hemp at home. 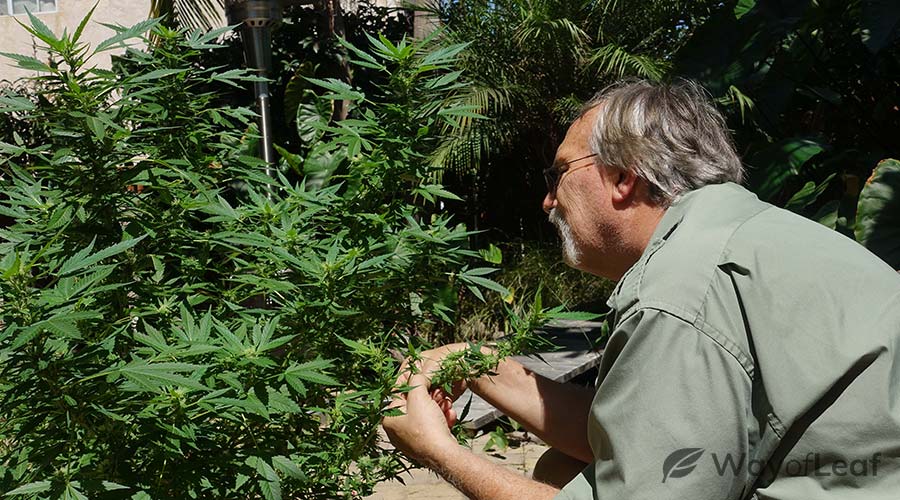 There were even ‘hemp meetings’ in different states. In these get-togethers, the hosts told attendees that they had the freedom to cultivate hemp outside in the same manner as they could grow tomatoes. This led to more than a few people pledging to spend thousands of dollars, creating a grow room indoors for hemp.

Unfortunately, the Farm Bill of 2018 did not address the issue of residential growth. The law was passed specifically to award the agriculture sector a new cash crop. The hope was that it would stimulate local economies and give struggling farmers a much-needed break.

As things stand, you are not permitted to grow hemp at home in states where cannabis cultivation is illegal. If you are caught cultivating hemp in these places, you are treated as if you have grown marijuana! Therefore, residents of states such as Alabama, Connecticut, and Georgia can’t grow hemp in their private residences.

Related article
How to Grow Industrial Hemp: Is It Legal?

If you live in a state such as Colorado or California, where it IS legal to grow cannabis, you are also allowed to grow hemp. However, it counts towards your overall cultivation limit. In Colorado, for example, you can cultivate a maximum of six cannabis plants. This means you can only grow six hemp plants at home and no weed. Alternatively, you can grow three hemp plants and three cannabis plants.

All of the above is only applicable for home growing. If you want to grow hemp outdoors, you need to apply for the commercial license issued by your state’s department of agriculture. Remember, even in states where cannabis cultivation is legal; the plants must remain out of public sight.

By the way, the approval process can take months. Apart from paying your fee, you also have to submit to a background check. There are also minimum requirements for square footage and acreage. You can’t grow ten hemp plants in a field and expect to get away with it! You even have to submit the GPS coordinates of your growing area to the federal government!

Ultimately, the Farm Bill of 2018 only applied to commercial hemp farming. Otherwise, you can only cultivate it in states where marijuana growing is legal. Even then, you have to adhere to the state’s maximum cannabis plant limit.

While it is unlikely that the police will raid a house in Colorado because you are growing eight hemp plants, you could technically get into legal trouble.

In reality, those who can grow a handful of hemp plants at home are likely better off sticking with high-CBD marijuana strains. Options such as Charlotte’s Web and ACDC will probably provide you with a far higher cannabidiol level.

If you are intent on growing hemp, your only option is to send a commercial hemp cultivation application to your state’s department of agriculture. In this scenario, you are free to grow a significant amount. The trouble is, there are minimum limits that are likely too high for someone who only wants a dozen or so hemp plants.