Most people believe that marijuana has a distinctive scent. How often have you enjoyed a joint, only to become paranoid due to the strong smell? In states where weed remains illegal, the stench of herb could get you into trouble with the cops.

However, when they arrive, there is a good chance that the person who made the call is mistaken. Although we perceive weed as having a peculiar smell, there are several things with a similar scent. Here are five wacky items that that share an eerie (but gloriously similar) smell to pot.

Better known as cleome, spider flower not only smells like weed but has a similar appearance! It is a large flower capable of growing up to six inches in height. However, you shouldn’t mistake cleome for marijuana when it is in full bloom, as it has three different shades of pink at full maturity (you won’t find many pink hues in even the most vibrant marijuana strains in the world).

If you get close enough to the spider flower, you get a smell akin to mint-flavored cannabis. Also, it is the leaves of the cleome that look like what you’ll see on a marijuana plant. So much so that you must be wary when growing it in a state where weed is illegal, as there’s a possibility a nosy neighbor will report you to the authorities. At this point, you can almost guarantee a long and awkward encounter as you try to explain.

This attractive-looking plant doesn’t resemble marijuana in the same way as cleome, but it certainly smells like it!

Over in England, an elderly couple endured a terrifying ordeal when a group of masked men smashed down their door in the small village of Winford. The thugs believed there was marijuana growing in the property due to the odd smell.

As it happened, the couple were growing Caucasian crosswort in their front garden! Unfortunately, the criminals ended up stealing money from the couple and ran away once they realized their mistake.

When the police arrived, they initially found it difficult to determine the source of the smell. They only learned about the plant after contacting a local horticulturalist named Alan Down, who explained that Caucasian crosswort is easy to grow and makes for excellent ground cover. Usually, though, it thrives in hot and dry climates, which is why its existence in a UK garden was so unusual.

After an excellent smoking session in your bedroom, it is time to destroy the evidence. One of the most popular ways to mask getting high is to blow the smoke out of a window through a sploof, which is a homemade tube. Other common tactics include spraying Febreze, blowing the smoke out of the window after each toke, or relying on an exhaust vent.

However, when you haven’t adequately prepared for the mission, the quick and easy method is to spray the room with a pungent deodorant. Incredibly, one of the most popular deodorant brands, Lynx Axe, not only fails to get rid of the weed smell, but it adds to it!

It seems as if the entire ‘Touch’ line of deodorants from Lynx has a marijuana-like scent. We have no idea if this is deliberate by the company or if it is just an unfortunate coincidence. Whatever the case, there are hundreds of message boards dedicated to this phenomenon so if you’ve ever thought to yourself “damn, does this deodorant smell like weed?”, you are not alone!

Have you ever been overwhelmed by the scent of weed in your immediate vicinity, only to look down and realize that it’s coming from you? It turns out that there is a scientific reason!

Dr. Matam Shelomi of the Max Planck Institute for Chemical Ecology provided a potential answer. He compared a group of studies that broke down weed and human sweat into individual chemicals to determine if they shared any compounds. Of the almost 100 in human sweat and over 230 in pot, there were 11 matches! Bizarrely, several cannabis compounds are also akin to the stench of gym socks!

Also, did you know that there are different kinds of human sweat? Apocrine sweat is clumped around the genitals and armpits and is most active during stressful periods (and sex). Eccrine sweat is the clear and watery kind you’re familiar with after exposure to heat. It helps cool the body down but generally has a mild scent. In any case, it appears as if the weed scent comes from apocrine sweat.

Another theory suggests that terpenes are present in sweat. As terpenes are fat-soluble and work with compounds such as THC, they could be stored in our fat cells and released during exercise. Therefore, if you are a heavy smoker and also like to exercise, the sweat you produce could have a strong marijuana smell. Crazy, right?!

Furthermore, strains such as Orange Bud and Blueberry Cheesecake are the most likely to cause your sweat to smell like pot.

It’s worth mentioning, though, that this doesn’t happen to everyone. Only those genetically predisposed to oozing out weed-scented sweat will do so. Body odor is caused by bacteria that dwell in the skin and break down molecules into volatile compounds, which eventually evaporate into smells. 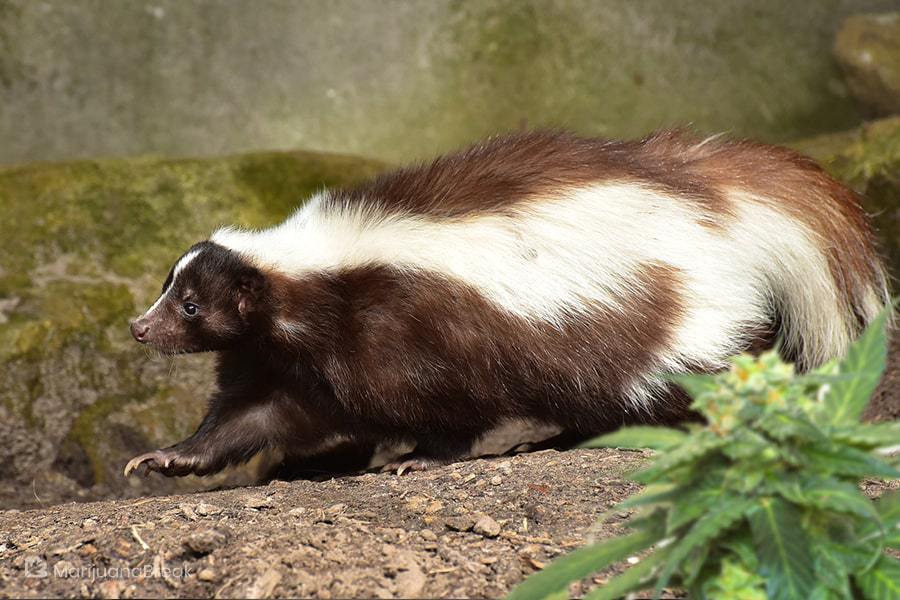 There’s a reason why one of cannabis’ many nicknames is ‘skunk’! Once again, the answer lies in terpenes which are responsible for the variety of odors that come from weed.

As you know, skunks are famous for producing a foul-smelling odor from their backsides as a means of warding off predators. Their scent glands produce the appalling spray, which is a mixture of chemicals that contain sulfur and a class of organic compounds called thiols.

Ultimately, it is a bit of a coincidence that some of the 120+ terpenes found in marijuana also smell like thiols. Therefore, you’ll only get that ‘skunk’ smell from Mary Jane if it contains a large number of terpenes that are chemically similar to thiols.

Hopefully, this article has shown you that when it comes to marijuana’s smell, things aren’t always what they seem. If you walk past someone’s garden and get a potent whiff of cannabis, it is probably a cleome or Caucasian crosswort plant, and not a grow house. Therefore, we ask you not to commit a robbery!

Also, if you have a substantial “moonshot” session, don’t use Lynx Axe body spray to hide the scent, as you’ll probably only supplement it! Moreover, be wary when exercising soon after a session, lest you smell like Howard Marks. And finally, the scent of certain strains genuinely smells like the pungent odor produced by a skunk, so don’t assume your weed has ‘gone off’ to keep predators at bay!