Cannabis is now legal in the majority of states, in one way or another. At present, medical marijuana programs are more common than legal recreational use, but polls show that American citizens are slowly changing their opinions.

Now that the tide is turning, we expect to see more and more states getting involved with cannabis legalization. Whether cannabis will be legalized on a federal level remains to be seen. Still, examples of decriminalization in Portugal and legalization in Canada show that the world doesn’t descend into chaos as a result of legal pot.

But while people’s access to cannabis is blocked, there will always be an illegal market. In some legal states, citizens feel priced out of the cannabis sector, and so black-market dealers are still thriving. We never encourage our readers to engage in illicit activities, so this guide to asking your friends for weed will primarily be for those in states with marijuana regulations.

If you’re wondering how to broach the awkward conversation of asking your buddy for weed, then read on.

Why Do You Need to Ask a Friend for Weed?

First off, we encourage you to consider why you’re asking a friend for weed. If you live in a US state with legal recreational marijuana, then you don’t really need to ask someone else for pot. There are still some circumstances in which you might want to ask someone else, however.

For example, some minors may be tempted to ask their older peers to visit a dispensary for them. However, the laws are in place for a reason, and you shouldn’t really be using recreational marijuana if you’re underage.

If you have a friend who’s knowledgeable about cannabis, you might as well ask them to help out.

But some people just feel a little anxious about going themselves. We get it – it can be scary! If you have a friend who’s knowledgeable about cannabis, you might as well ask them to help out. This way, you get to enjoy your first marijuana experience without the knee-trembling thought of going into a dispensary with no clue what to do.

And if you’re feeling anxious about a dispensary, then you might also be nervous about asking your pal for pot. After all, you don’t want to come across totally green! That’s why you’re here, reading this article. Below, we cover some of the basic terminologies so that you can confidently ask your friend for weed without turning red in the face.

Your friend might ask you what kind of weed you want. There are different types, including sativa and indica strains. As a general rule of thumb, sativas make you feel euphoric and spacy, whereas indicas relax your body and put you to sleep eventually. You can read the strain reviews here at WayofLeaf to get an indication of some of the most popular strains. However, if you’re completely lost, don’t be afraid to get your friend’s recommendation.

Aside from this, there’s plenty more terminology to familiarize yourself with. For starters, there are weights. Your friend (or dealer) will need to know the amount of cannabis you’re wanting. Here’s a quick rundown:

You may also hear the term ‘dub.’ This refers to a bag of cannabis costing twenty dollars. It’s usually roughly a gram, and it tends to be low-quality. The same applies to a ‘dime’ of weed, which is a ten-dollar bag

Speaking of quality, you may also come across terms like ‘dank,’ ‘mids,’ and ‘regs.’ These are basically tiers of cannabis. Dank weed is the highest quality and is the most expensive, while regs (or schwag) are of poor quality. Most people opt for mids, which remain affordable while supplying a decent high.

How Much Does Weed Cost?

If the person you’re asking for weed really is a friend, then you shouldn’t need to know too much about the cost. However, there’s always a chance that you’ll get ripped off.

Marijuana prices vary between states and even cities. It’s a matter of doing some research before you buy. Sadly, legal dispensaries tend to offer more expensive products than street dealers. Supposedly, you’re paying for a safety and quality assurance that your cannabis is potent and won’t make you sick.

For the sake of argument, California dispensaries sell an ounce of marijuana for $257 on average or $5.97 for a joint. By the way, Oregon’s weed is the cheapest, retailing for an average of $211 per ounce.

How to Ask a Friend for Weed

Now, onto the good stuff. The time has come to reach out to your buddy and make your request. But how do you go about it? Here are some suggestions. 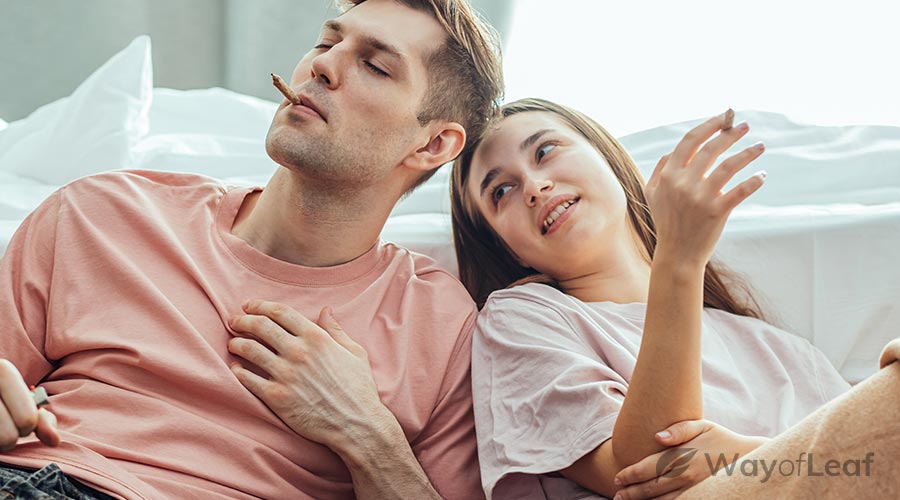 Nowadays, most people are chatting via text or social media messaging apps. If you’re getting in touch with friends, it’s likely via a texting service. In fact, many street dealers operate this way nowadays.

However, you’ve got to be careful. Law enforcement can be picky about texts regarding marijuana, even if you live in a legal state. So, if you’re texting your friend and asking them to pick up some quality bud, try to be discreet.

Marijuana aficionados will know that the thousands of words for weed have grown out of a long history of subtlety. Pot, grass, Mary Jane… whatever the newest name is, you’ll sound more comfortable and confident if you use it.

If you’re messaging a friend that’s a dealer, discreteness is even more vital. Try a message like, “Hey, can we meet later?” rather than straight-up asking for weed.

Give Them a Call

A phone call is a little safer, but it can still be awkward phoning and asking your friend for cannabis. We recommend making it clear that you’re willing to foot some of the bill, rather than forcing your friend to pay for the entire ounce that you’ll both be using.

Again, it’s best to try and be subtle in case anyone overhears. Although cannabis is being legalized in numerous states, there are still plenty of disapproving ears that might get in the way of your good time.

Get Together in Person

Probably the best way to ask your friend for weed is in person. First of all, it’s less awkward. If you’re lazing around with your pals looking for something to do, making the suggestion to get high is likely to be welcomed. Once an individual has been nominated to pick up, the rest of the group can relax and enjoy the vibes together.

If you’ve never smoked weed before, this is the best time to do it. Being around people in a comfortable environment is the safest and most enjoyable way to toke up. Plus, your buddies will be there for you if you overdo it and green out.

By the way, broaching the subject in person is also more straightforward than the other methods we have mentioned. All you have to do is ask!

Final Thoughts on Asking a Friend for Weed

As long as you’re willing to pay your share, asking a friend for cannabis is easy.

Please note that we would never encourage our readers to do something illegal. Always make sure you check the cannabis laws in your state, as regulations surrounding weed are constantly changing.

6
8 min read
Join the discussion
TOC
Premium
Your subscription has ended
If you love cannabis and want to support our site, join WayofLeaf Premium today and unlock
Best of all, part of your membership fee will go towards supporting the fight to legalize cannabis.
Sign Up for WoL Premium
Not now
I already have an account
×
Log in to Your Premium Account