Singing and cannabis have one undeniable thing in common; they both have the ability to make you feel fantastic! However, the connection between the two runs even deeper than that.

In this article, we explore the complex relationship between cannabis and singing. We will also explain the impact of smoking cannabis on your singing voice. Here’s all you need to know.

The Relationship Between Cannabis and Singing

Using cannabis and singing can both bring about a state of euphoria. As it turns out, this isn’t a coincidence since both activities influence the body’s endocannabinoid system (ECS).

The ECS is a combination of cell receptors and chemical compounds called endocannabinoids. The system has a regulatory function within the body and controls mood, memory, appetite, and the reward response. 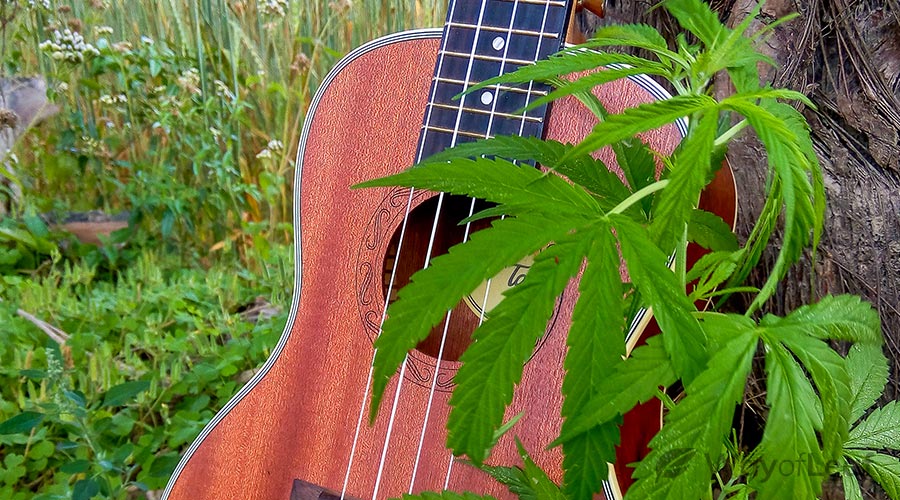 The cannabinoids in marijuana act on this system since many of them have a similar molecular structure to our endocannabinoids. This allows them to bind with the same receptors and trigger many of the same functions.

For example, THC (the intoxicating component of cannabis) has a similar shape to an endocannabinoid called anandamide. One of anandamide’s functions is improving mood, and it is sometimes nicknamed ‘the bliss molecule.’ THC binds with the same receptors as anandamide, imparting a state of calm or happiness, the typical marijuana high.

The non-intoxicating cannabinoid CBD also affects the ECS, although it does so indirectly. Rather than binding with cannabinoid receptors, CBD appears to increase our levels of natural endocannabinoids. Interestingly, a recent study suggests that singing may work comparably.

Researcher Nicole Stone led the study for Frontiers in Behavioral Neuroscience in 2018. It involved nine healthy female volunteers who were members of a choir. The research team tested the volunteers’ endocannabinoid levels before and after singing, dancing, cycling, and reading. They also assessed changes in mood, hunger, heart rate, and blood pressure.

After singing, the participants experienced an average 42% increase in anandamide levels. They also had higher levels of two other endocannabinoids, palmitoylethanolamine (PEA) and oleoylethanolamine (OEA). The women also reported improved mood and emotions after singing.

In comparison, cycling and reading increased only OEA levels. Meanwhile, dancing improved the volunteers’ mood but did not affect endocannabinoid release.

The Benefits of Cannabis and Singing

In recent years, research has highlighted the medicinal properties of cannabis. This has led many states to introduce medical marijuana programs allowing legal access to the herb. Some of the most common uses of medical cannabis include:

Meanwhile, singing may have some significant benefits of its own. Researchers have investigated its efficacy for a variety of conditions, including:

More evidence is necessary before we make any firm conclusions about the benefits of singing for health. However, it seems likely that it will have some positive effects, not least thanks to its interaction with the ECS.

Is Cannabis Good or Bad for Your Singing Voice?

Although both singing and cannabis have some potential benefits for physical and mental health, there are some drawbacks to consider. The most evident is the fact that many people use marijuana by smoking, a process that could damage the voice.

Smoking anything, either cannabis or tobacco, will harm the throat and lungs. Some sources suggest that smoking marijuana is even more damaging than tobacco since it burns at a higher temperature. Furthermore, people tend to smoke cannabis without a filter, inhale more deeply, and hold the smoke for longer than with cigarettes.

A study by Meehan-Atash and colleagues appeared in JAMA Otolaryngology-Head & Neck Surgery in 2019. It found that cannabis smokers had dark vocal folds, as shown by laryngoscopy. It also suggested that marijuana can cause lung and throat injury due to the by-products of smoking.

Some other adverse effects on the voice that cannabis smokers may experience include:

So, are these effects permanent, or is it possible to reverse them by quitting smoking? Let’s take a look.

If I Quit Smoking Cannabis, Will My Voice Improve?

The aforementioned Meehan-Atash study suggests that stopping smoking or switching to a vape can reduce respiratory problems. Although it does not specify the impact of quitting cannabis on the voice, it is highly likely that it will help.

While it is clear that smoking and singing is not an optimal combination, we know less about the impact of vaping.

Therefore, singers may be keen to find another method of consuming cannabis. Fortunately, there are now many different options available.

How to Use Cannabis Without Damaging Your Voice

Since cannabis legalization began sweeping across the states, people have been coming up with ingenious ways to use the herb. Now, the days when the only options were to roll a joint or load a bowl are long gone.

One ever-popular consumption method is cannabis edibles. They allow people to enjoy all the benefits of marijuana without putting a strain on the vocal cords or lungs.

Furthermore, edibles are highly versatile, with options available to suit every taste. Some companies are even selling cannabis or CBD-infused lozenges. These are a great way to use marijuana while also soothing the throat.

Another more modern, but highly effective, way of using cannabis is dabbing concentrates. Although this method still involves inhalation, concentrates like wax and shatter are much purer than cannabis flower. This means that they have less of a negative impact on the throat and lungs.

Other options include oils, tinctures, topical creams, and patches. Our article on how to use cannabis without smoking has further details.

Potential Benefits of Cannabis for Singers

Aside from the smoking issue, cannabis may actually have some benefits for avid singers. For example, cannabinoids like THC and CBD are well-known for their anti-inflammatory properties. Marijuana is also a muscle relaxant, and relaxing the throat and jaw are vital components of singing.

Therefore, although there is no research specifically on cannabis and singing, the herb could have some valuable properties.

To maximize the potential benefits of cannabis for singing, we recommend using either lozenges or syrup. You could also create your own soothing beverage by mixing a spoonful of cannabis honey with your favorite herbal tea.

Just remember that cannabis can cause dry mouth as a common side effect. Therefore, singers will want to keep plenty of warm or room-temperature water on hand to keep themselves hydrated.

Final Thoughts on Cannabis and Singing

Using cannabis and singing are both activities that many people love. Their vast popularity probably stems from the fact that they both influence the feel-good function of the endocannabinoid system. Both singing and cannabis can improve the mood and may have many additional benefits for health too.

The downside is that smoking marijuana is likely to have a negative impact on the voice. However, there are plenty of other viable consumption methods available. In fact, using cannabis without smoking could potentially help singers due to its relaxing and anti-inflammatory effects. We hope to see more evidence of this emerging soon.

Do you use marijuana and sing? How does it affect your voice? Let us know in the comments.

5
6 min read
Join the discussion
TOC
Premium
Your subscription has ended
If you love cannabis and want to support our site, join WayofLeaf Premium today and unlock
Best of all, part of your membership fee will go towards supporting the fight to legalize cannabis.
Sign Up for WoL Premium
Not now
I already have an account
×
Log in to Your Premium Account