Written by Natalie Saunders, B.A., LicAc
5 min read
5 comments
Read Later
Overview
Follow these instructions for a simple Bhang Thandai recipe. Firstly, place two cups of water in pan on stovetop and bring to boil. Add chopped cannabis leaves and flowers to boiling water and remove from heat. Cover and leave to soak for 10 minutes. Strain to remove the plant material and set liquid aside. Now, place three cups of milk and warm on the stovetop. Combine the cannabis with a couple of tea spoons of warm milk and grind to a paste. Continue adding more milk until you have used about half a cup. Strain the plant material and set liquid aside. Add the water and milk together and mix well. Stir in the remaining milk, spices, ground almonds, and rose water, along with sugar or honey. Chill and stir well before serving. 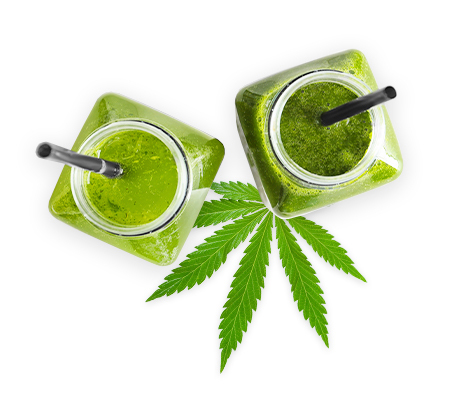 Bhang is one of the most traditional and time honored forms of marijuana edibles, or rather ‘drinkables,’ in the world. Throughout Northern India, it is a popular way of ingesting the herb and an integral part of Hindu culture.

Let’s take a look at precisely what bhang is and how you can prepare your own refreshing cannabis-based beverage at home.

Technically speaking, bhang is the name given to a paste made from the leaves and flowers of the a href=”https://wayofleaf.com/cannabis/growing/is-your-cannabis-plant-male-or-female”>female marijuana plant. However, the word has also become synonymous with a beverage that is prepared using the paste.

Bhang is made by soaking marijuana leaves and flowers in water and then grinding them to a paste. The paste is traditionally rolled into balls called bhang goli which are smooth, shiny, and green to dark brown in color.

One of the most common uses for bhang is making a drink known as ‘bhang thandai.’ It also contains milk, ground nuts, and a variety of spices. Bhang thandai is typically drunk during religious festivals such as Holi, and bhang is a major part of Hindu culture thanks to its association with Shiva, the god of destruction. Although this may sound ominous, destruction is not seen as a negative trait in Hinduism as it allows new life to be created.

Among the many stories about Shiva in the Hindu religion, one states that he descended from the Hindu Kush mountain range, bringing bhang with him as a gift to humankind. The god himself is said to use bhang on a daily basis to enhance his powers, and he is sometimes known as the ‘Lord of Bhang.’ The association between Shiva and bhang is so strong that the god even has a marijuana strain named after him. Check out our strain review of Shiva Skunk to learn more.

Using bhang is a commonplace and socially acceptable practice in India. It is so widespread that when the British colonized the country in the 19th century, they decided that outlawing its use would cause too much civil unrest. As a result, they allowed the consumption of bhang to continue, and it can still be bought in government-sanctioned stores today, especially in Northern regions of the country.

As well as having religious uses, bhang has been used in Ayurvedic medicine for thousands of years. It is one of the five sacred plants mentioned in the Atharva Veda (an ancient Hindu text compiled around 2000–1400BC). Among its many reported benefits, bhang is said to relieve the following conditions:

Of course, we now know that the cannabinoids, terpenes, and flavonoids produced by the cannabis plant have a wealth of benefits for human health. It seems that the Hindus were a step ahead of the game in regards to recognizing the many advantages of the plant.

However, the uses of bhang are not limited to healthcare. Sadhus (Hindu holy men) use the preparation to aid them in their mediation and yogic practice, and according to legend, ancient warriors would use bhang to calm their nerves before a battle. One such legend tells of how the preparation gave an anxious soldier the courage to slide underneath an armed elephant and slay it, thus leading his army to victory.

Bhang is also revered as a powerful aphrodisiac and is often used by couples on their wedding night. Perhaps it is no coincidence that the most famous sexual guide ever written, the Kama Sutra, was published in a country where cannabis is such a significant part of everyday life!

If you like the sound of bhang and would like to make your own refreshing marijuana beverage at home, you’ll be pleased to hear that the process is not too complex. There are numerous ways to prepare your bhang thandai, and a quick internet search will throw up dozens of different methods of making the drink.

In India, it is easy to walk into a bhang store, buy some goli, and crumble the paste into a food processor with the other ingredients. However, here in the western world, we have to get a little more creative.

To make bhang in the most traditional way possible, you will need some special equipment such as a mortar and pestle. Once you have this, it is easy to make your own infused beverage with just a little effort.

Here is a simple bhang thandai recipe for you to try at home.

For our bhang thandai recipe, you will need the following equipment and ingredients:

This recipe calls for fresh cannabis leaves and flowers. If you are a grower, it is an ideal way to use up your unwanted fan leaves and trim. It is possible to make the recipe using dried and cured cannabis flower, but it will be more difficult to make the paste the right consistency. Using dried bud may also make your bhang thandai more potent, and you should adjust the quantity you use accordingly.

Getting the Most Bhang for Your Buck

Cannabinoids such as THC and CBD are fat-soluble, so to maximize their absorption, you need to mix them into a vehicle with a high fat content. Therefore, it is best to make your bhang thandai using full-fat cow’s or goat’s milk.

If you’re vegan, you could try using plant-based milk to make your bhang thandai, but it may not be as potent. For the best results, choose milk that has a higher than average fat content such as coconut milk. You can also increase the fat content of your bhang by adding a spoonful of yogurt, ghee, melted butter, or coconut oil to the finished mixture.

What is Bhang? Final Thoughts

Bhang is a traditional way of consuming marijuana, and it is popular among the Hindu population of Northern India. It is used to aid relaxation and meditation, as well as having a range of potential benefits for health.

Bhang thandai is a drink that is typically made from bhang and drunk during religious festivals. It is simple to make your own bhang thandai at home with just a few basic pieces of equipment, and it makes a tasty and refreshing way to enjoy your weed.

If you have ever used edibles, you will know that consuming cannabis in this way has powerful effects and can take anywhere up to two hours to kick in. Therefore, it is wise to exercise some caution when drinking bhang and start with a small amount first. Once you know how bhang is going to affect you, you can increase the dose to a level that suits you.

For more delicious ways to consume your weed, check out our recipes page at wayofleaf.com.

How to Make CBD Gummies

Tasty AND therapeutic? It can't be so...

How to Make Weed Infused Chocolate

Why not give it a try?

5 THC Recipes that Will Definitely Get You Crazy High

How to Make a Wicked Marijuana-Thai Veggie Stir Fry

2
2 min read
Join The Discussion
TOC
Premium
Your subscription has ended
If you love cannabis and want to support our site, join WayofLeaf Premium today and unlock
Best of all, part of your membership fee will go towards supporting the fight to legalize cannabis.
Sign Up for WoL Premium
Not now
I already have an account
×
Log in to Your Premium Account