A CDL is a commercial driver’s license and is a mandatory requirement if you wish to drive a Commercial Motor Vehicle (CMV). There are three classes of CMV depending on weight, and you need a CDL to drive any of them. In specific states, you may also need a CDL to operate certain vehicles. In New Jersey, for example, you need a commercial driver’s license to drive a van for hire (designed to transport 8-15 passengers), a limousine, or a bus.

CDL’s are generally associated with truck drivers, and America has a significant shortage of them. Companies such as Walmart and Amazon are in dire need of drivers to bring their goods across the country.

According to the American Trucking Associations (ATA), we need at least 61,000 more truckers to meet demand.

It is a job that can now pay more than $80,000. However, an increasing number of Americans are turning away from the role because of the rough lifestyle. Sitting behind the wheel and feasting on roadside café food is not conducive to good health. The ATA says there are 3.5 million professional truck drivers in America. Therefore, it isn’t an industry that everyone is fleeing from.

After spending weeks driving across the United States, it is only natural that a driver may want to wind down. Once he gets home, he can light up a relaxing joint. After all, he is off-duty now and (presumably) lives in a state where weed is medically or recreationally legal. Wrong! It is a confusing situation, but if you hold a CDL, it isn’t wise to apply for a medical marijuana card. Here’s why…

Why Would a Truck Driver Need a Medical Marijuana Card?

It is easy to dismiss the job of a truck driver as an ‘easy’ one. Some in the industry believe it is one of the best jobs you can get in the U.S. without a college degree. However, don’t assume it is as simple as getting behind a wheel and driving. It is common for long-haul drivers to spend several days driving cargo thousands of miles. Imagine spending nights in motels, and stopping only to eat substandard gas station food.

Incorporating movement into your life at regular intervals is essential. Given the deadlines faced by truck drivers, they can’t stop the truck and hit the gym on the way! The job also has an association with obesity. This is hardly a surprise since drivers often combine little or no exercise with high-calorie food. Associated medical conditions such as high blood pressure and diabetes could also come into play.

All of a sudden, it becomes easy to see why the holder of a CDL would need an MMJ card. If you have a CDL and believe you need a medical marijuana card, you can apply for one and get accepted. Alas, you need to tread very carefully, or else you could lose your job.

Do you hold CDL and live in a state with a medical marijuana program? If so, you can follow the steps required to apply for the application. If you have a qualifying medical condition, there is no reason for a physician to deny you access to weed. You are entitled to your MMJ card, even if you have a CDL. However, you can wave goodbye to your career if you ever test positive for marijuana. 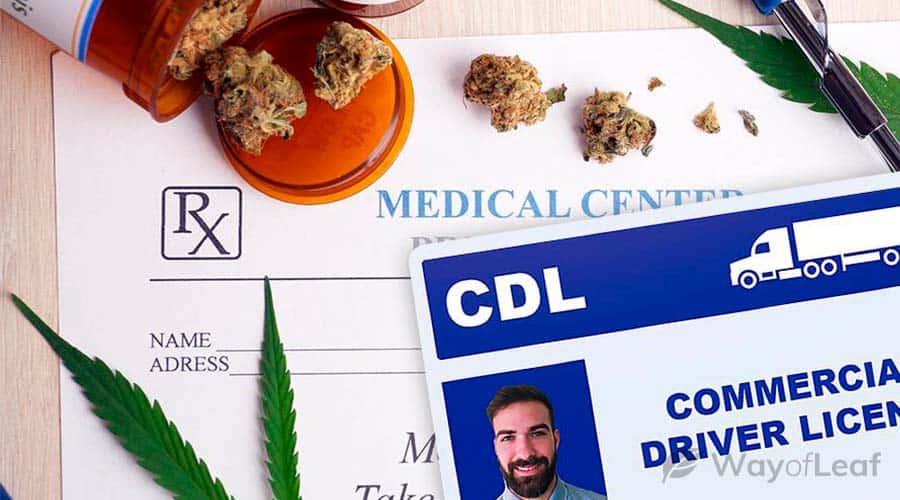 The DOT says holding an MMJ card is not a valid medical explanation if a transportation employee tests positive for any prohibited drug.

Remember, even though weed is legal for medical or recreational purposes in 33 states plus D.C., it is still federally illegal. The DOT, of course, is a federal employer. This means the use of a Schedule I drug is prohibited. ‘Safety sensitive’ employees are not allowed to have it in their systems at any time.

The laws governing CDLs involve state and feds. The latter has set the rules since 1986 with the implementation of the Commercial Motor Vehicle Safety Act. As a result, the United States Federal Motor Carrier Safety Administration is in charge of drug testing policies. Therefore, it is a terrible idea to use medical marijuana if you have a CDL.

What Could Happen if I Use Weed and Drive My CMV?

If you have a CDL and wish to drive a CMV, you must first pass a pre-employment drug test. It is common for companies to administer drug and alcohol tests after crashes. Also, employers can randomly test CDL drivers throughout the year. It is legal for your employer to immediately test you if they believe you are potentially under the influence of drugs or alcohol.

Refusal to take a drug or alcohol test is an automatic failure. A test failure or refusal to participate will result in the suspension of your CDL. You don’t get it back until you complete the ‘return-to-duty’ process with a DOT-qualified substance abuse professional.

Things get tough with a failed drug or alcohol test on your record. You may find it hard to get another job for up to a year, sometimes longer. Also, your employer is not obligated to hire you back even if you complete the return-to-duty process. At best, you will lose tens of thousands of dollars in earnings. At worst, your driving career is over.

Taking the Risk with CDL and MMJ

At WayofLeaf, we do not advocate a CDL holder risking their license, and livelihood, by using medical marijuana. The problem is, truck drivers, can legally apply for, and receive, a medical marijuana card. You need to fill in some personal details. Then, arrange an appointment with a physician legally allowed to provide MMJ certification and explain your medical issues.

If the doctor believes you are eligible for a medical marijuana card, you receive certification. Once you have your state MMJ card, you can legally purchase a certain amount of cannabis from a licensed dispensary. All of the above happens whether you have a CDL or not. The issue occurs when you start using the weed. At that point, you are just one random drug test away from ruination.

It is a bitter pill to swallow for the nation’s truck drivers. This is especially the case in a state such as Maine. There, employers are not allowed to fire existing employees or refuse a job applicant for testing positive for marijuana on a drug screening. However, once again, federal law trumps state law. Practically all modes of transportation, trucks, airlines or pipelines, face the same DOT drug testing requirements.

How Long Does Marijuana Remain in My System?

Using weed as a CDL holder is risky due to the length of time it stays in your system. The most common form of drug screening is urinalysis. As the name suggests, you urinate into a cup, and a lab tests the sample for various drugs. As far as weed goes, testers are looking for THC-COOH metabolites.

Picture the scene: You have completed a sequence of grueling journeys and have a few days off to relax. You light up a couple of joints and enjoy your well-earned time off. Four days later, you are behind the wheel again, but not before facing a random urinalysis. You will likely test positive and lose your CDL. Is it fair? Probably not, but that’s the way it is as long as marijuana remains a federally illegal substance.

Final Thoughts on Getting an MMJ Card with a CDL

In one sense, the need for CDL holders to have clean systems is perfectly understandable. They are in control of large and powerful vehicles capable of causing colossal destruction if poorly handled. No one should ever be under the influence of marijuana (or alcohol) when they get behind the wheel. If you are stoned while driving, you deserve the punishment you receive if caught.

However, CDL holders with legitimate medical concerns are not allowed to feel the relief potentially provided by marijuana. THC-COOH metabolites remain in the system for days, or even weeks, after use. Therefore, a commercial motor vehicle driver is unable to take so much as a puff of a joint. If they do, there is the fear of a random drug test catching them a few days later.

The nation’s drivers have a tough job and are susceptible to medical problems. MMJ could potentially alleviate some of the symptoms of these issues. You can get a medical cannabis card if you have a CDL, but you are taking an enormous risk. Some drivers believe they can avoid detection if they use one of the popular detoxing THC methods viewed online.

The truth is, none of those tactics are guaranteed to work, no matter what forum ‘experts’ claim.

If you get an MMJ card and use weed, even during your downtime, your CDL is continuously at risk.

It is even necessary for CMV drivers to show caution when using CBD products. Make sure you only use items with full third-party lab reports. Otherwise, there is a danger of consuming enough THC to show up on a drug test. We have heard of cases where drivers got fired in this exact scenario.

Can a Minor Apply for a Medical Marijuana Card [And Is It Safe?]

Know this before you apply

How to get medical weed for free

Want a Medical Marijuana License While Pregnant? What to Know