At the time of writing, 15 states plus D.C. allow adult-use cannabis. Twenty other states have a medical marijuana program. If you use cannabis without an MMJ card in one of those states, you are breaking the law. However, in states where recreational marijuana is permitted, you can walk into a dispensary and buy up to an ounce in most cases.

In states where recreational marijuana is permitted, you can walk into a dispensary and buy up to an ounce in most cases.

As long as you are 21+ years of age and have an I.D. to prove it, you should have no issues. So, if you live somewhere like California where adult-use cannabis is allowed, why bother going through the MMJ application process?

There are several reasons why it is beneficial to invest in a medical marijuana card in an adult-use state. For a start, you save money, but there are plenty of other bonuses, too. We check them all out in this article.

Please note that several adult-use states still don’t have a fully functional recreational sales program. Therefore, it remains illegal to use cannabis without an MMJ card in New Jersey, for example. Make sure you check your state’s laws to ensure you get up to date information.

While the terms depend on where you live, most MMJ cardholders can expect to pay significantly less tax. A few states have incredibly high recreational cannabis tax rates, as you will discover below.

In contrast, MMJ cardholders don’t pay the ‘sales and use’ tax on pot purchased from a medical marijuana retailer. This also applies to purchases of cannabis concentrate, edibles, and topical products.

To avoid paying this particular tax on cannabis, present your Medical Marijuana Identification Card (MMIC). Otherwise, you have to pay at least 7.25% extra, and usually more.

Understanding taxation in different jurisdictions is a daily concern for Americans. Therefore, it isn’t a surprise that marijuana tax is also confusing. California is among the worst states for exorbitant cannabis taxation.

According to Proposition 64,  buyers must pay an excise tax along with state sales and use tax and local taxes. As an MMJ cardholder, you pay at least 20% tax in most cases. However, recreational users pay more than double that amount. Even worse, the rate of tax increased in California in 2020.

Here are the three different fees paid by California residents:

In the state of Colorado, recreational users must pay the:

If you have an MMJ card, however, you don’t have to pay the sales tax.

It is a similar story in every state which allows recreational and medicinal marijuana. If you go through the MMJ card process, you’ll typically (but not always) end up paying less tax. The precise amount you’ll save varies from state to state.

How Much Can I Save with an MMJ Card?

Here is a quick look at the various taxes in the states which allow recreational and medicinal marijuana. 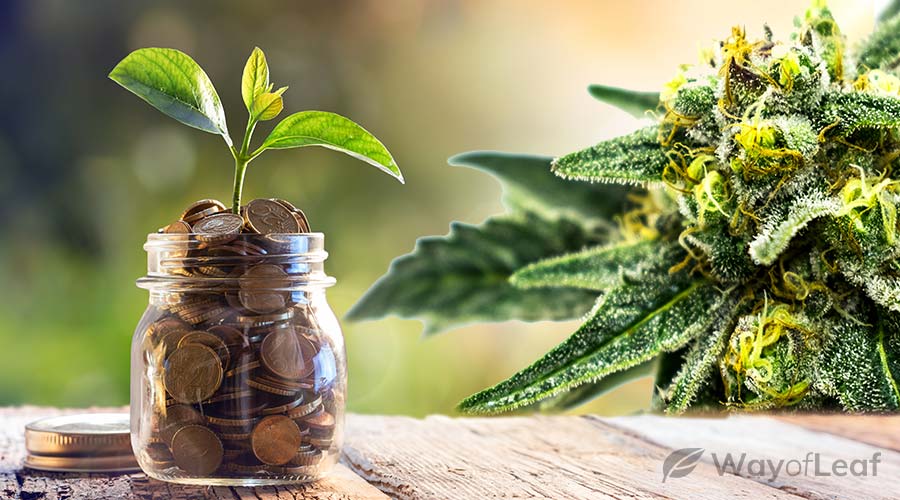 The state has no state sales tax. If you are a grower, you have to pay $50 per ounce of bud. It is $15 per trimmed ounce when selling to retailers or dispensaries. As a result, this cost is passed onto consumers instead of a sales tax. As cannabis costs around $300 an ounce in total, it is effectively a 20% tax rate.

It costs $25 to apply and $20 to renew your MMJ card. The average cost of a doctor’s appointment ranges from $200 to $250. On average, an MMJ card costs $225. The lack of a sales tax means it is questionable whether you should get an MMJ card in Alaska for savings alone. There are other benefits. However, the gap between what medical and recreational users can have is closing all the time.

We have already mentioned the tax confusion in the Golden State. There is also a product tax for growers of:

A doctor’s appointment could cost up to $150, and it costs up to $100 to apply. The average cost of weed is around $250. Overall, Californians would need to use at least four ounces of marijuana per annum to justify the MMJ card cost.

In Colorado, MMJ cardholders pay the state sales tax of 2.9%. You do not pay it if you buy recreational weed. However, retail cannabis and cannabis-infused products are subject to a 15% retail marijuana tax. It is added to the final price. There is also a 15% excise tax, which MMJ is also exempt from.

You must also pay local sales taxes, which vary from county to county. In Denver, for example, all medical marijuana products are subject to a general sales tax of 4.31%. Then there is the small matter of a 5.5% special sales tax rate. Therefore, you can add 9.81% to the other 2.9% for 12.71%. Yet, you have to add an extra 30% for recreational users, so they pay an incredible 42.71%!

You can get high-quality pot in Colorado for no more than $240 an ounce. The combined cost of a doctor’s appointment, renewal, and application is well over $200. However, you probably don’t need more than six ounces or so a year to see a financial benefit. If you use at least that amount, it is probably worth applying for an MMJ card in Colorado.

Adult-use cannabis became legal in Illinois on January 1, 2020. However, the first recreational dispensaries did not receive licenses for several months. Residents will pay 10% for items with less than 35% THC. Cannabis, with more than this amount, carries a 25% tax. Marijuana-infused merchandise with a THC of over 35% has a 20% tax rate.

Certain municipalities can collect a 3% cannabis retailers’ tax. County boards can levy a 3.75% tax for sellers in unincorporated areas. MMJ cultivators pay a 7% privilege tax, while customers are charged a 1% pharmaceutical sales tax.

Overall, MMJ patients may pay up to 34.75% less tax! It costs $100 for a one-year card, $200 for two years, and $250 for three years. You also have to pay the usual $200+ for a consultation. However, the enormous tax savings means it is worth applying for an MMJ card in Illinois, even as the recreational market grows.

The state legislature recently decided to impose a 10% excise tax on retail sales of cannabis. MMJ is subject to a sales tax of 5.5%, while edibles have a ‘prepared food rate’ charge of 8%! Those who grow cannabis in Maine must pay the following excise taxes, which are doubtless passed on to consumers:

The application fee for an MMJ card in Maine is $100. A doctor’s appointment can cost $300! With the high average cost of an MMJ card, Maine residents would need to buy 16 ounces in a year to justify the cost. That’s about one-eighth every three days!

Even so, the cost of applying and renewal is $50 apiece, and a doctor’s appointment can cost $200. Cannabis costs up to $340 an ounce in the state. Therefore, you will begin saving money on tax as an MMJ cardholder in Massachusetts if you purchase over five ounces a year.

The Michigan Registry Patient fee is $40, and the average consultation costs around $200. It also costs $150 to renew your card, but it is valid for two years. Although you pay less tax, you’ll need to use a significant amount of cannabis to make savings overall with an MMJ card.

All users have to pay the 15% excise tax on the wholesale sale. There is no reduction if you have an MMJ card. You also pay the 6.85%-10% sales tax. However, medical cannabis is now exempt from the 10% retail excise tax.

To get a medical marijuana card in Nevada, you have to pay $50 for a one-year card or $100 for two years. You can expect to pay up to $200 for a doctor’s appointment. You save a little on taxes with an MMJ card. Nonetheless, you need to use a lot of cannabis to justify the application costs. Nevadan dispensaries have reciprocity with other states, so you can get a card from another state if you have residency in it.

Cannabis users pay a total of 17% in retail tax, and certain cities and counties can add an extra 3%. MMJ cardholders are exempt from these taxes. That said, weed costs just $210 an ounce on average.

The cost of applying for an MMJ card in Oregon is $200, among the highest prices in the country. You could pay another $200 for a consultation. Even taking the tax savings into account, you need to buy plenty of cannabis to justify the cost.

While weed is legal for recreational use, it is still illegal to sell it recreationally. Residents will likely need to wait until 2022 before purchasing cannabis without an MMJ card in Vermont.

Overall, you would need to purchase at least 12 ounces of weed a year for a Washington MMJ card to be worth it. But wait! You are only allowed to grow marijuana plants if you have an MMJ card. You can carry three ounces instead of the one-ounce that recreational users are permitted. Once you figure out how to grow, you can save hundreds of dollars a year with your card.

Although you can use weed freely in Washington D.C., you are not allowed to sell it recreationally. You can possess and grow it, however. Some vendors also give cannabis to customers as a ‘gift’ after charging for another product. The District is looking to crack down hard on this practice, however.

In November 2020, residents of four more states voted for recreational cannabis. New Jersey, Arizona, and Montana already have MMJ programs. However, South Dakota voters said ‘yes’ to both medical and adult-use cannabis. None of the states have implemented their program yet. South Dakota hopes to sell recreational cannabis by April 2022. The other states may have faster implementation since they already have MMJ programs in place.

Although nothing is set in stone, here is how each state intends to tax recreational cannabis:

Strictly speaking, there is no ‘discount’ on medical marijuana. However, some dispensaries do make it cheaper to purchase it as a medical patient. In most states where you can buy it medically or recreationally, you pay less tax when you present an MMJ card.

In most states where you can buy it medically or recreationally, you pay less tax when you present an MMJ card.

As you can see from the overview, the savings you make depends on where you live. For example, Nevada residents save a little. In contrast, Maine cannabis users need to purchase up to a pound of the substance a year to save. Alaska and California residents fare best as they only need to buy a few ounces a year to start saving.

Your rate of consumption is all-important as far as saving money is concerned. This is because you have to pay application, renewal, and doctor’s fees. MMJ cardholders do enjoy other benefits, such as having the ability to grow or possess more.

Please note that all the numbers and prices in this article are subject to change due to supply, demand, and state laws.

How cannabis is boosting the e…

Get Your Marijuana Card and Become a Qualified MMJ Patient

How to Ace Medical Marijuana Evaluations

Come prepared to your evaluation