Although medical marijuana is now available in 33 states plus D.C., it isn’t exactly easily accessible to all residents of these states. One of the major problems is the cost of obtaining an MMJ card. In Florida, for example, you are looking at $250 for the doctor’s consultation, $75 for the registration fee, and perhaps $50+ for a few grams of weed. Remember, your health insurance is NOT covering any of these costs.

Over in Ohio, it can cost up to $300 for a doctor’s recommendation, $50 for a patient registry card, and another $50+ for a few grams of herb. You’ll spend at least $300 in most states just to get enough weed to last maybe a few days or a week. It is also worth noting that if the physician doesn’t recommend you for an MMJ card, that money is wasted!

We heard that some states took this into account and are now making provisions to help people in need of medical marijuana, who are unable to afford the price of a consultation. You may think that people ‘should’ have a few hundred bucks, but the harsh reality is that 58% of Americans have under $1,000 in savings. 27% have NO money saved at all. Suddenly, a $300 or $400 expenditure becomes a LOT more difficult to find. If you live in Ohio or are a veteran, help could be at hand.

In April 2019, Ohio Medical Marijuana Card, the biggest provider of MMJ evaluations in the state, announced its intention to give away 25 free evaluations each month to help reduce the financial burden for patients who have difficulty affording the costs of medical cannabis. While there is a massive surplus of weed in states like Oregon, it is a very different story in Ohio where demand far exceeds supply.

In economic terms, this means the price of the product; in this case, marijuana is going to rise. In Ohio, it can cost up to $50 for just two grams of medical marijuana; the equivalent of approximately $700 per ounce. When you add in the cost of the evaluation and card, it becomes difficult for people with minimal savings to treat their medical conditions with weed.

As well as offering the monthly free consultations (worth up to $300), Ohio Medical Marijuana allows patients to pay for appointments in installments, and even offers a $100 discount to veterans. It is a nice gesture and as the president of the company, Connor Shore, said, they have no control over how much an Ohioan dispensary charges for its product.

He also said that you could submit a fee waiver on the company’s website. All that Ohio Medical Marijuana asks is that you explain your situation, be honest, and understand that the company is unable to help all applicants. Shore went on to say that a lot of Ohioan residents who suffer from a serious medical condition are unable to afford an MMJ card consultation.

The organization has nine locations in the state and is responsible for seeing over half of Ohio residents who have an MMJ recommendation! With 15 licensed physicians, Ohio Marijuana Card has helped more than 12,000 patients receive an MMJ card in the last year.

If you live in Ohio, it may also be worth checking local events to see if there are any Marijuana Expos in your area. In June 2019, the Expo in Sharonville allowed attendees to speak with growers, dispensary operators, and physicians. At this particular event, Ohio Medical Card gave away five FREE medical marijuana evaluations.

Earlier in the year, Expos in Akron and Cleveland attracted more than 4,000 visitors. There will be a Marijuana Expo in Columbus on August 17, and another one in the same city on September 14. Keep your eyes peeled for any similar events in your local area. 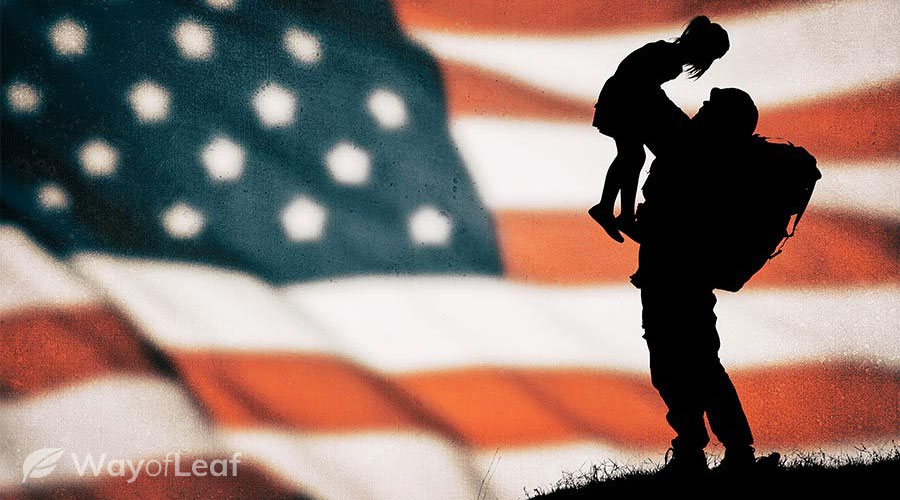 There are far more American veterans than you might think. According to U.S. Census data from 2018, there are 18.2 million veterans in this nation. The Department of Veterans Affairs serves around nine million of them annually, but there is still a huge gap between what veterans receive, and what they need.

As at 2016, around 66% of veterans had served either in the Vietnam or Gulf Wars. While the American public has immense respect for the men and women who served their country, they are aware that our veterans are not looked after properly. Many of these individuals return home having witnessed and been involved in events that have a profound psychological effect.

The healthcare and financial problems faced by veterans are well-known, yet these issues persist. According to 2018 data from the Department of Veteran Affairs, veterans aged 18-34 have a higher rate of suicide than any other age group. The suicide rate in this age demographic jumped an alarming 10% from 2015 to 2016. Conditions such as PTSD can potentially be treated by medical marijuana, but sadly, too many of our veterans find it hard even to afford the evaluation.

As such, we are pleased to note that certain MMJ organizations are doing their bit to help those who have served the United States of America. In the last few years, a variety of companies have offered free evaluations to veterans. One of the most recent occurred in Massachusetts in July when Brockton Biz offered free certifications to veterans in July 2019.

One of the major issues is that VA doctors are beholden to federal laws so they legally can’t prescribe medical marijuana to the troops. However, there are many worthy organizations that are dedicated to helping veterans get MMJ cards, including Hero Grown, Weed for Warriors Project, and Veterans Cannabis Project. These organizations are always looking for donations of time or money, so get in touch if you think you can help!

There are also companies in different states that offer a free medical marijuana consultation as an ‘incentive’. For example, MMJ Doctor in California is offering a free evaluation if you refer three friends to their service. You can get a free $20 replacement for ‘liking’ the brand on Facebook, and a free photo ID for reviewing the site on Facebook, Google, or Yelp. There are doubtless many companies offering similar rewards.

Over 500 Americans leave the armed forces and return to civilian lives each day. It is an enormous transition; not helped by the fact that many veterans have physical injuries and mental trauma to deal with. This is the price of serving their country. Those in need are directed to the Department of Veterans Affairs but don’t often find the aid they need.

Sadly, the VA is only too happy to prescribe free opiates as ‘treatment,’ but these drugs cause more problems than they solve. It is normal for our troops to take 30+ pills a day and become hopelessly addicted. An increasing number of veterans have come forward to state that medical marijuana has improved the quality of their lives.

Soldiers have spoken of their terrible addictions to painkillers and a desire to commit suicide. Once they received a medical marijuana card, they discovered that the weed was able to help with their severe pain and even mental issues such as PTSD. The problem is that these men and women often need an ounce or more a week. At a cost of $300+ per ounce (depending on the state), it is more than most veterans can afford.

Indeed, even the cost of the evaluation is a financial burden. While we are pleased to see organizations helping out with free evaluations for our veterans, we would like it to be taken a few steps further. Rather than forcing our veterans to take addictive, and possibly deadly, opioids; why not consider giving all eligible veterans a free MMJ card? Let’s also ensure they receive discounts for their cannabis; it is the least they deserve.

It seems that some of our politicians feel the same way. In March 2019, Earl Blumenauer filed a bill that aims to allow the VA to recommend medical marijuana to military veterans. This is precisely what we are talking about.

The combination of lack of savings and a high price means that MMJ consultations are beyond the financial scope of a shockingly large group of people in need of medical marijuana. There are a few organizations that provide a limited supply of free consultations, but they are hard to find, and you must prove that you are in sufficient financial hardship.

There are also several organizations dedicated to helping our veterans get free consultations. When the alternative is a possible addiction to deadly opioids, the very least we can do is give our veterans a viable choice to steer clear of these drugs. Cannabis isn’t perfect, but it could be what veterans need to survive.

What Are the Consequences of Getting a Medical Card for Marijuana?