Hemp is a wonder crop. It’s an amazingly versatile plant that can be used for a wide range of purposes. Scientists are starting to discover more and more uses for hemp, with recent studies suggesting that hemp batteries may be more powerful than lithium.

Hemp is opening up doorways to a better future, both technologically and medically. In the medical world, hemp has proven its worth, and now it’s ready to disrupt the technology sector as well. Some geniuses have discovered a way to use hemp fiber as a supercapacitor. Scientists explain that the fiber from hemp can be transformed to produce high-performance devices to store energy.

So now the question is: Which is better? Hemp or lithium batteries?

What Is a Lithium Battery?

Lithium batteries are batteries that have metallic lithium as an anode. They’re also known as lithium-metal batteries and are incredibly popular these days. You can find lithium batteries in cell phones, laptops, iPods, and PDAs. They’re so common because they’re some of the most energetic rechargeable batteries on the market.

A lithium battery is made of four key components. It contains the cathode, which determines the voltage and capacity of the battery and is the source of the lithium ions. The anode allows the electric current to flow via an external circuit. When the battery is charged, the lithium ions are stored in the anode.

Lithium batteries are mostly used as power sources for portable electronics and implanted medical devices. While they are more expensive than ordinary alkaline batteries, they have a significantly longer lifespan.

What Is a Hemp Battery? 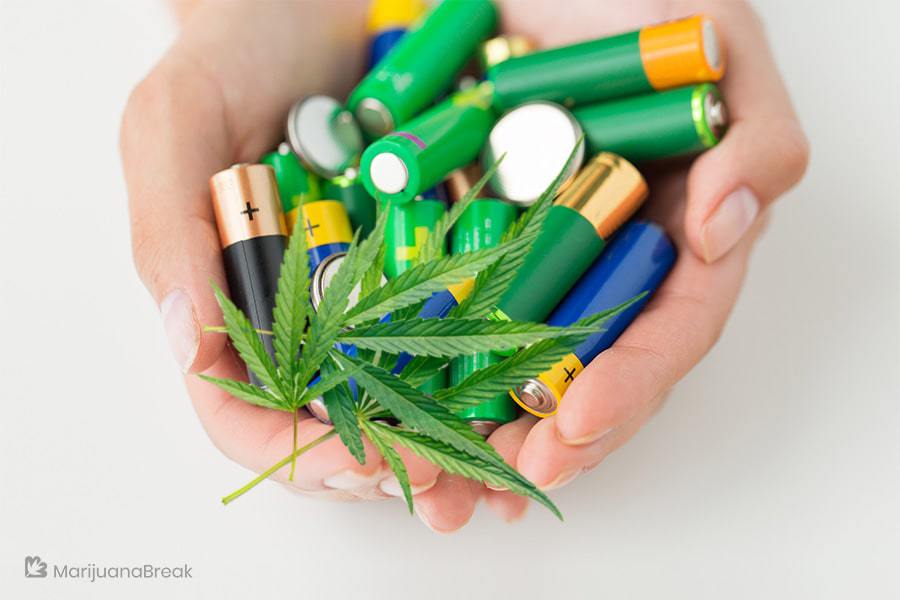 Hemp batteries are the new and improved replacement of graphene. Graphene comprises a single hexagonal honeycomb lattice layer of tightly packed carbon atoms. It is one of the lightest, strongest, and most conducive compounds to ever be discovered.

However, scientist, Dr. David Mitlin from New York’s Clarkson University claims to have found a way to manufacture hemp waste into “ultrafast” supercapacitors that are better than graphene. He says that creating this graphene-like hemp material costs a tiny fraction of what it takes to produce graphene.

For those who aren’t in the know, graphene is a unique synthetic carbon material that is lighter than foil and is also bulletproof. The main limit to its use is its feasibility. Fortunately, hemp costs a tiny fraction of the price of graphene.

The scientists proved their theory by cooking the hemp and turning it into carbon nanosheets. Later, they used that to build supercapacitors, which they discovered were better than the ones made out of graphene.

The fibers that are recycled into energy storage devices have changed the way that electronics are powered. Conventional batteries store large amounts of energy and drip-feed. However, supercapacitors rapidly discharge its entire load. For this reason, the latter is better in machines that require sharp bursts of power.

Electrodes produced from specific hemp fiber can boost the energy density of supercapacitors and hold energy similar to or on par with graphene. It’s a more cost-effective technology since the electrodes are produced from biowaste, ensuring a rather simple process.

Robert Murray Smith conducted an experiment to compare the performance of lithium batteries and hemp batteries.

He connected each of the batteries in a circuit at separate times. The test monitored three curves – the Ampere curve, the Volts curve, and the Volts per Amp curve. The sampling record was set to be once every second for a total of ½ hour.

He performed the test with a focus on both lithium and hemp batteries in the same equipment and to the same degree. When the curve (volts-amperes) was observed for both of the cells, he discovered that the power of the hemp cell was 31, while the power of the lithium cell was only 4.

Based on the results of this experiment, it appears as though the performance of the hemp cell is significantly better than the lithium cell.

Hemp cuts costs drastically for its implication in energy storage devices. It’s also a much better solution for the environment. Findings such as these show that hemp is truly a valuable resource.

As the world opens its eyes and more nations start to decriminalize the plant, the hope is that more companies will follow in these footsteps and hemp transform the planet to live on sustainable energy.