Cannabis terpenes have received significantly more attention in recent years. They are responsible for the unique flavors and effects of different strains. They also possess a variety of potential benefits for health and wellbeing.

Today we look at humulene, one of the most abundant cannabis terpenes. We’ll explain its effects and where to find it, including some of the best humulene-rich strains.

Humulene is a terpene, more specifically, a sesquiterpene. In cannabis plants, these compounds play a role in protection against pests and disease. They are often highly aromatic and are part of the reason why different marijuana strains have varying tastes and effects. 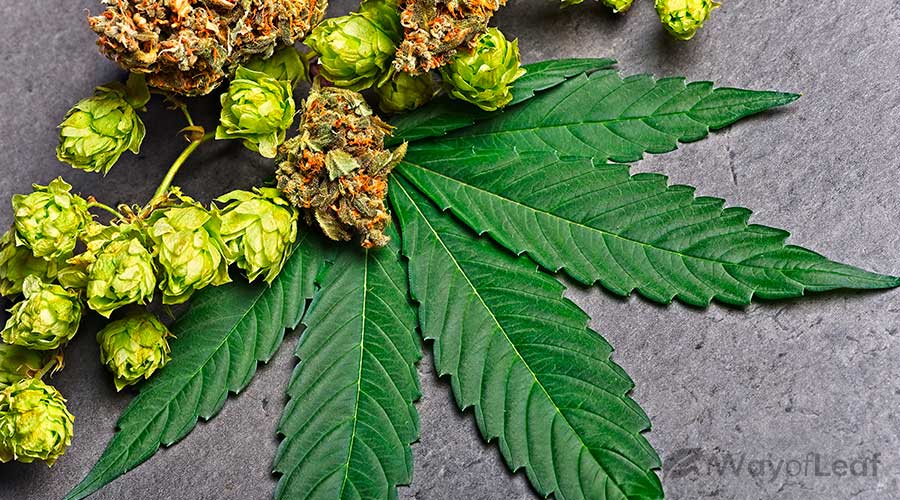 Humulene has the chemical formula C₁₅H₂₄. Its atoms are arranged in an eleven-membered ring, and the molecule is an isomer of beta-caryophyllene.

This means the two terpenes have the same formula but a different structure and, therefore, different properties. For this reason, humulene is also sometimes known as alpha-caryophyllene.

People usually describe humulene’s aroma as woody and earthy with hints of spice.

Research has highlighted several potential benefits of humulene. However, it is crucial to note that most of the existing studies utilized humulene extracts from plants other than cannabis.

Part of the reason for the lack of marijuana research is down to its illegal status. However, now that interest in cannabis terpenes is growing, it is likely that more studies will emerge soon.

Until then, we must rely on evidence relating to other plants to inform us of humulene’s benefits. Let’s look at some of the key studies on humulene’s effects to date.

It appears that humulene may have several beneficial effects, including the following:

Like many cannabis compounds, humulene seems to have potent anti-inflammatory properties. A 2007 study for the European Journal of Pharmacology found that humulene reduced certain types of inflammation in mice and rats. Amazingly, the anti-inflammatory effects of humulene were comparable to the potent corticosteroid, dexamethasone.

The authors concluded that this terpene might be an essential tool in managing and treating inflammatory disease.

A further 2008 study for Planta Medica supported these results. It found that alpha-humulene had anti-inflammatory activity following both oral and topical administration.

Finally, a 2009 study for the British Journal of Pharmacology looked at oral or inhaled humulene effects in mice with allergic airway inflammation. Once again, the compound displayed anti-inflammatory effects. Furthermore, aerosol administration of humulene decreased mucus production by as much as 51%.

A 2016 study for the Biomedical and Pharmacology Journal investigated the effects of alpha-humulene on diabetic rats. The results indicated that the terpene had antioxidant effects. It decreased levels of 8-OHdG, a marker of oxidative stress, and displayed potential anti-diabetic properties.

Since one of the primary roles of terpenes is protecting plants from disease, it is no surprise that many of them possess antibacterial properties.

Although these results are positive, further research is needed to confirm the clinical effects of humulene in humans. We hope to see more evidence emerging soon.

Does it really work? …

If you are a medical marijuana patient suffering from inflammation, you may want to try the humulene effects for yourself.

In this case, you will need to choose a strain that contains generous levels of this terpene. Here are some of the best humulene-rich strains on the market today.

Other Sources of Humulene

In addition to cannabis, you can find humulene in a variety of other herbs and spices.

One of the richest sources of humulene is hops, a common ingredient in beer-brewing. Hops are, in fact, closely related to cannabis as both are members of the family Cannabaceae. Their Latin name is Humulus lupulus, giving some indication of just how much humulene they contain.

Some other familiar sources of humulene include:

To boost your humulene intake, consider adding more of these foods to your daily diet.

Humulene is an important cannabis terpene. Its potential benefits include anti-inflammatory, antioxidant, and antibacterial effects.

However, to date, most of the research on humulene has focused on animals rather than humans. Therefore, more studies are necessary to confirm the clinical usefulness of this compound.

You can find humulene in a range of everyday herbs and spices and some types of beer. It is also abundant in certain cannabis strains, especially those with Girl Scout Cookies genetics.

Therefore, anyone wishing to increase their humulene intake should consider these varieties next time they visit the dispensary.