Most people have heard of THC and know that it is the chemical responsible for marijuana’s intoxicating effects. It is a powerful substance that is capable of significantly impacting both body and mind.

However, scientists have now identified another cannabinoid that is even more potent than THC. It is called delta-9-tetrahydrocannabiphorol, or THCP for short. The research team also isolated a similar CBD analog, CBDP.

This article is a full THCP review and also looks into CBDP. It outlines why the discovery of the THCP cannabinoid is so crucial to the future of cannabis. Finally, it looks into THCP’s legality and provides details on where to buy it.

In 2019, a research team led by Cinzia Citti attempted to distinguish the specific cannabinoid profile that makes a strain suitable for medicinal use. They performed a series of experiments on an Italian variety of cannabis called FM2.

In the course of their study, they identified the two compounds THCP and CBDP. These cannabinoids are very similar to THC and CBD in structure. However, there is one crucial difference that sets them apart and could make them even more potent than their counterparts.

Tetrahydrocannabiphorol is a phytocannabinoid, one of the hundreds of active compounds that cannabis plants produce in their resinous trichomes. Scientists have identified almost 150 of these chemicals to date, and THCP is a relatively new cannabinoid on the list. 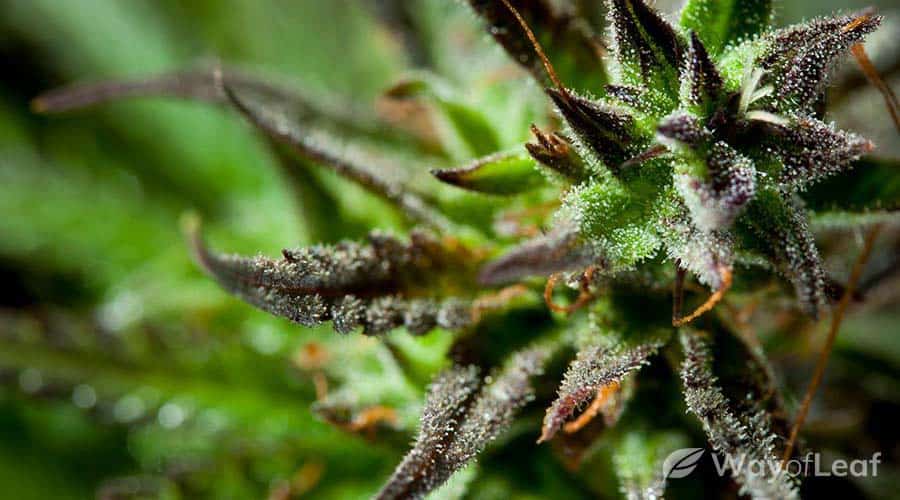 The beneficial compounds in cannabis include cannabinoids, terpenes, and flavonoids. However, cannabinoids are especially renowned for their medicinal benefits.

There are many different cannabinoids with various properties. Some of the best-known examples include:

Let’s take a look at how cannabis plants synthesize these cannabinoids and what is special about THCP.

Although there are many different phytocannabinoids, they all have a somewhat similar structure. This is because they all start life as the same molecule, cannabigerolic acid (CBGA).

Many people refer to CBGA as ‘the mother cannabinoid.’ It forms through a complex reaction between olivetolic acid and geranyl pyrophosphate. It then undergoes further enzymatic reactions to become the acidic forms of the phytocannabinoids: THCA, CBDA, CBCA, etc.

Cannabinoids only exist in their acidic forms in raw cannabis. When they come into contact with heat, a process called decarboxylation occurs. This reaction changes THCA into THC, CBDA into CBD, and CBCA into CBC, etc.

THCPA and CBDPA form in a similar way to these other phytocannabinoids. It is only after exposure to heat that they become THCP and CBDP.

However, unlike the other cannabinoids, THCP and CBDP exist in meager quantities in cannabis plants. For this reason, they have remained hidden until now.

How Much THCP Is in Cannabis?

As we have already mentioned, THCP and CBDP are far less abundant than THC and CBD. For example, in the Italian FM2 strain, typical levels of the four cannabinoids are as follows:

Note that the measurements for THC and CBD are in milligrams, while those for THCP and CBDP are in micrograms.

Each milligram is equal to 1000 micrograms, so the concentrations of these newly discovered cannabinoids are extremely low. No wonder they have escaped the attention of scientists for so long!

At present, we know very little about the THCP content of other cannabis strains. However, this information should become available in the future as research into the cannabinoid continues.

There isn’t a high enough THCP content in marijuana to create the products on the shelves. Therefore, let’s look into how manufacturers create the cannabinoid.

How Is THCP Made?

At present, the FM2 strain is the only one containing noticeable amounts of the THCP cannabinoid. Therefore, sellers of THCP products have to create them in a lab.

For legal reasons (more on this later), manufacturers create it from hemp containing a maximum of 0.3% delta-9-THC. However, little is known about the process since companies don’t tend to provide much information. As a result, make sure you ask for third-party lab reports before buying any product. Also, look through THCP customer reviews to learn more about the quality of a brand.

As part of their study, Citti and colleagues tested the newly discovered THCP on mice. They found that when they administered low doses of 2.5mg/kg, the mice displayed reduced activity levels.

At higher doses of 5mg/kg and 10mg/kg, the chemical’s sedative effects increased. The mice displayed catalepsy, a trance-like state in which the body becomes rigid and unable to move. However, at this dosage, THCP also appeared to possess potent painkilling properties.

THCP has been tested on mice. It may have painkilling properties, but can also have risks at higher doses.

The team suggests that THCP may be responsible for the pharmacological effects of some marijuana strains. However, it appears that the benefits of THCP are very much dose-dependent. Although the team’s THCP review did not involve tests on humans, it seems likely that the risk of side effects would be high.

One factor that deters people from using high-THC strains for medical conditions is the risk of adverse reactions. Common examples include dry mouth, sedation, anxiety, paranoia, and dizziness. A stronger substance, such as THCP, could potentially amplify any of these adverse side effects. Therefore, its use would require careful dosing and monitoring to provide genuine benefits.

How Is THCP Different from THC?

The molecular structures of THC and THCP are almost identical. The thing that distinguishes them is a part of their make-up called a ‘side alkyl chain.’

An alkyl chain is a string of carbon and hydrogen atoms attached to a molecule. In THC, the alkyl chain consists of five carbon atoms. However, in THCP, it consists of seven.

It is this difference in the length of the alkyl chain that changes the effects of the chemical. It appears that having more carbon atoms in its side chain makes THCP far more potent than THC.

Although all cannabinoids have a fairly similar chemical structure, the length of the alkyl chains can vary. THCA, CBDA, and CBCA all have five carbon atoms in their alkyl chains.

The highest activity occurs with compounds with alkyl chains of eight carbon atoms. If the chain is longer than this, its action begins to decrease.

The reason for this is the way that phytocannabinoids interact with the receptors in the body. These receptors include the CB1 and CB2 receptors, a crucial element of the endocannabinoid system (ECS).

Longer alkyl chains allow cannabinoids to bind with these receptors more effectively, thus increasing their effects. For this reason, THCP’s seven-long carbon chain makes it more potent than THC, which has a chain of just five.

Indeed, the team in the Italian study found that the compound had 33 times the binding affinity to CB1 receptors than delta-9-THC. While it doesn’t mean THCP has 33 times the potency, it is potentially 5-10 times stronger than delta-9.

This is a fiendishly difficult question to answer. Understandably, sellers of it suggest that THCP is legal because it isn’t on any prohibited substances list. Also, they tend to use hemp, which is now legal to cultivate in the U.S. if its delta-9-THC content doesn’t exceed 0.3%.

However, it is probably technically illegal in the United States due to the Federal Analogue Act (FAA). The FAA automatically makes analogs of prohibited substances illegal. Therefore, THCP, THC-O, and THCC are almost certainly illegal federally.

Also, the DEA’s Interim Final Rule (IFR) makes synthetically created THCs illegal, even if they come from hemp. As manufacturers create THC-P in a lab, it is classified as ‘synthetic’ and is illegal according to the IFR.

Synthetic forms of THC are technically not legal due to an interim rule by the DEA, making THCP effectively illegal in numerous states.

It is also probable that European nations such as Germany, the United Kingdom, Italy, France, and Spain prohibit THCP.

However, if you live in a state where marijuana is recreationally legal, you can likely buy THCP products without any legal hassles. It is a similar story if you have an MMJ card in a state with a medical marijuana program.

Finally, Canada doesn’t have similar analog laws to the United States. As Canada also allows recreational marijuana, THCP is likely legal there too. However, finding reputable sellers is a major issue.

What THCP Products Are Available?

This cannabinoid is a recent addition to the marketplace. Given its potency, users are advised to approach it with caution, especially items such as THCP gummies. Then again, products such as THCP edibles are hard to find. At present, you’ll likely only find the following:

Indeed, even THCP tinctures are rare finds right now. The few reputable brands that sell this particular cannabinoid focus on vape products. If you go down this route, check the ingredients as you would when buying a CBD or THC e-liquid. Pay close attention to any thinning agents used, and steer clear of products containing PEG 400 or PG. Even VG is an ingredient worth being wary of.

Where to Buy THCP

As mentioned, the selection of THCP products available is limited at present. Before buying, please keep up to date with your state’s laws to ensure THCP is legal. Already, state legislators have moved to ban delta-8-THC, for example. It is only a matter of time before they take action regarding THCP.

The consensus is that Binoid is the best option for buying this cannabinoid. The Los Angeles-based company sells a wide variety of alternative cannabinoids. It keeps things simple with its THCP range, sticking with vape juice in 1ml cartridges.

As THCP is so potent, Binoid’s approach of mixing THCP distillate with delta-8 distillate is a sensible one. You still derive the intoxicating buzz associated with THCP, but the high should prove manageable for experienced users. The cannabinoid is hemp-derived and includes terpenes rather than traditional thinning agents.

However, we don’t recommend using THCP if you have a low THC tolerance in general or are new to intoxicating cannabinoids. Indeed, Binoid goes to great lengths to include a warning with its products.

Related article
Five of the Best Weed Products without THC

Some of these are perfect gift…

THCP and CBDP are a pair of phytocannabinoids that have remained a mystery until now. Initial research suggests that they could be far more potent than their counterparts, THC and CBD. Therefore, this exciting discovery could significantly alter the way we use cannabis in the future.

However, although these chemicals hold great medical potential, they may also pose an increased risk of side effects. More research is necessary to determine their exact impacts on human health, so watch this space. We will provide more information on THCP and CBDP as it becomes available.