Information regarding popular cannabinoids (i.e. CBD and THC) is abundant. Terpenes, however, are not talked about as much. Like cannabinoids, terpenes are active ingredients found in cannabis. They play a key role in both the aroma and the taste of marijuana, and may also have a significant influence over the therapeutic effects of the plant.

The interest in cannabis terpenes is higher than ever before because cannabis growers are becoming far more aware of the importance of terpenes.

They regulate the type of high you feel, and also define the unique flavor profile of different strains. From commonly found names like myrcene to more obscure compounds like phellandrene, each terpene plays a distinct part in creating the unique aromatic profile of a strain.

Geraniol is one of more than 200 different terpenes found in cannabis. It’s a colorless, flavorful oil that naturally occurs in geraniums, and can also be found in lemongrass, lemon peels, roses, blueberries, and carrots, among other plants. In this guide, we will discuss this powerful terpene in detail, including its benefits, uses, and possible side effects.

Geraniol is a fragrant terpene that inherited its name from the geranium flower, which also contains geraniol and has a similar aroma; a sweet rose scent with notes of citrus.

Geraniol is the main compound present in rose oil. It’s also found in the cannabis plant as well as in citronella oil (from a species of lemongrass) and palmarosa oil (also derived from lemongrass). It is a component of the essential oils of lemon and geranium as well as numerous flowers, fruits, and vegetables. 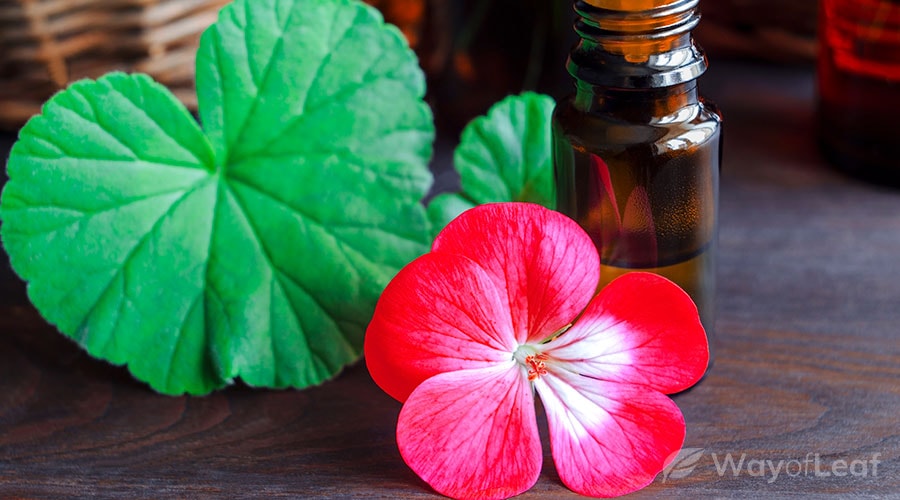 Geraniol is not as prominent as some of the more popular cannabis terpenes. However, it’s still well-known due to its subtle floral profile, which offers its signature sweet flavor to strains like Agent Orange and Black Cherry Soda. It also has an array of potential medicinal uses due to its antibacterial, antifungal, and anti-inflammatory properties.

Like many other terpenes, Geraniol is often used as an all-natural ingredient in foods such as candy and ice cream. It’s also often used in the cosmetics industry for perfumes and lotions, as well as soaps and detergents.

Interestingly, geraniol is also a compound produced by bees. The terpene serves as their mark on nectar-bearing flowers and a guide for the bees to find the entrance to their hives.

Aside from its use as an aroma and a flavor, scientific literature suggests that geraniol also has many potential therapeutic benefits.

Geraniol as an anti-inflammatory

In animal studies, as seen in a 2016 study published by NCBI, geraniol has been found to reduce inflammation in traumatic spinal cord injury. Simultaneously, the terpene promoted cell survival and offered antioxidant benefits, thereby suggesting that geraniol has significant promise in treating injuries.

Another animal study found in the European Journal of Pharmacology reported similar results and demonstrated that geraniol has anti-inflammatory effects against atherogenesis – the formation of plaques in the arteries, which can cause the arteries to harden, as well as high blood pressure and high cholesterol.

Geraniol as a neuroprotectant

A study issued in the Journal of Neuroscience Research reported that geraniol acts as a neuroprotectant, which means it may help preserve the function and structure of nerve cells. The study suggests the terpene may be especially useful in the treatment of neuropathy in those with diabetes.

Neuropathy is a medical condition in which damage to the nerves can cause numbness, pain, and weakness in the limbs. The study sums up that geraniol may be a promising therapeutic compound in the management of diabetic neuropathy in humans.

Geraniol as an antibacterial and antifungal agent

A 1997 study published in the journal Microbios combined antifungal and antibacterial tests utilizing five aromatic components of essential oils; geraniol, linalool, menthol, cineole, and citral. Geraniol was discovered to be the second-most effective component in fighting bacteria (linalool was number one).

In combating fungus, geraniol tied with citral as the most effective component. The study found that in total, geraniol could inhibit 16 types of bacteria and the entire 12 fungi that were used in the experiment.

Dozens of cannabis strains contain the geraniol terpene, but many have only negligible quantities. Here are a few of the strains that feature a high concentration of geraniol:

Potential Side Effects of Geraniol

Anecdotal evidence suggests that allergic contact dermatitis, or sensitive skin irritation, may be caused when using geraniol topically. This could be the case for many substances you use daily, including detergents and soaps. Whether you’ve got sensitive skin or not, you should read the instructions/warnings that come with topical products to ensure you’re using it correctly.

The United States Food and Drug Administration (FDA) acknowledges geraniol as safe for consumption when used properly. Furthermore, the Environmental Protection Agency (EPC) exempts the terpene from registration when used as a pesticide or insecticide-like chemical.

Over the years, geraniol has been at the center of several scientific studies to determine how beneficial and useful it is when included in cannabis strains. Although more research still needs to be done, existing studies suggest that the terpene has a number of potential therapeutic benefits, which may be helpful in managing several medical conditions.

Geraniol is one of the rarer terpenes and therefore isn’t always easy to find.

Moreover, finding products that report on their terpene content isn’t all that common. But even if terpene results aren’t available, these powerful compounds can’t hide – just use your nose. The slight smell of roses and citrus in a cannabis strain may indicate high levels of geraniol. You can also look for cannabis flower or products that are rich in linalool, which typically correlates with higher levels of geraniol.