Delta-8 THC is a naturally occurring cannabinoid in the cannabis plant. You can find it in tiny quantities in both marijuana and hemp. However, as there is so little delta-8 readily available, companies convert delta-9 THC or CBD into it via a chemical reaction. D8, as it is also known, has become extremely popular. It provides a less intense intoxicating high than delta-9 but is associated with many of the same benefits.

However, the practice of converting other cannabinoids into delta-8 is something of a legal minefield. Already, states are lining up to ban D8, while there is confusion over what federal law says. At WayofLeaf, we aim to educate readers, which is why we have created a series of up-to-date guides on the legality of delta-8. Today, we check out whether it is legal in South Carolina.

One might assume that delta-8 is illegal in South Carolina. After all, the state is one of the few in the U.S. that doesn’t have a medical marijuana program. The only law that specifically permits the use of any cannabinoid is Senate Bill 1035, also known as Julian’s Law. Signed into law in June 2014, it permits children with severe epilepsy to use low-THC oil if recommended by a physician.

The only law that specifically permits the use of any cannabinoid is Senate Bill 1035, also known as Julian’s Law.

South Carolina has yet to even decriminalize cannabis possession. You could spend up to 30 days in prison on a misdemeanor charge for the possession of any amount. A second offense could spell up to a year in jail. Since delta-8 is intoxicating, surely it means the compound is illegal?

In reality, delta-8 THC isn’t strictly illegal in South Carolina. In 2017, the state legalized the cultivation of industrial hemp under the rules of the federal 2014 Farm Bill. It later updated its rules surrounding hemp to correspond with the updated 2018 Farm Bill. It is legal to grow industrial hemp in South Carolina as long as it contains a maximum of 0.3% delta-9 THC by dry weight.

This is outlined in South Carolina House Bill 3449, Section 46-55-10. The legislation clearly states that any part of the hemp plant is legal. This includes extracts, derivatives, isomers, salts, salts of isomers, acids, and cannabinoids. The exception is delta-9 THC, and only in amounts of over 0.3%. 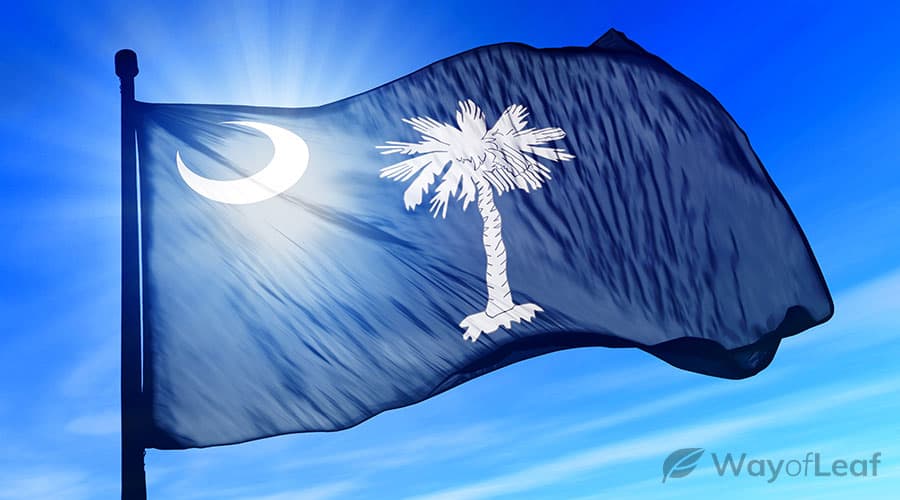 There is nothing in South Carolina state law that specifically addresses delta-8 THC. However, this fact hasn’t prevented sellers of the compound from facing legal issues. A vape shop owner in Clinton named Robert Oggenfuss had approximately $5,000 worth of delta-8 products confiscated from his store.

According to Oggenfuss, the D8 in his products is derived from legal hemp. He isn’t likely to be charged with a crime pending lab analysis. Therefore, it is unfortunate that the confiscation occurred in the first place. Whether he gets his products back is another story.

While South Carolina’s rules surrounding delta-8 remain unclear, up to 16 states have moved to prohibit or restrict the substance. At least six further states seem likely to implement restrictions or outlaw the cannabinoid shortly. Federal law is also less than transparent, though delta-8 could be heading towards ‘banned’ status. At least, it will if the DEA gets its way.

What Are the DEA Rules About Delta-8 in South Carolina?

We know that naturally occurring delta-8 in hemp is currently legal. The problem facing sellers is that extracting the cannabinoid is extremely expensive and impractical due to the small amount available. Consequently, delta-8 manufacturers use CBD or delta-9 THC to create D8, which is where legal issues arise.

How to Make Delta-8

The D8 products you see online or in a local store are created in a lab. A growing number of companies elect to convert CBD into delta-8 via a chemical reaction. This is because, at present, D8 is more profitable than CBD. Here’s a quick overview of the process:

The process is relatively simple for anyone with a background in chemistry. However, it is also something that the FDA disapproves of.

Lab-Created Delta-8 Is Illegal According to the FDA

According to the FDA, synthetic or lab-based delta-8 is federally illegal. It made this announcement via its Interim Final Rule (IFR) in August 2020. The IFR states that naturally occurring THCs in hemp are legal as long as the maximum delta-9 content is 0.3%. Therefore, using and selling D8 extracted directly from the hemp plant is legal.

However, ALL synthetically derived THCs are controlled substances as per the IFR. The FDA classifies lab-created delta-8 as synthetic, which technically makes it illegal.

It is also worth noting the terms of the 1986 Federal Analogue Act. It states that a chemical analog of any controlled substance intended for human consumption is also a Schedule I substance. Therefore, the 1970 Controlled Substances Act (CSA) provisions that outlawed cannabis and delta-9 also apply to delta-8.

Related article
How Long Does Delta 8 Stay in Your System?

Sellers of D8 products are fighting back. The Hemp Industries Association and several plaintiffs have issued a federal court challenge to the IFR. Rod Kight represents the plaintiffs, and the North Carolina-based attorney argues that delta-8 is a hemp extract. He says that if you can extract delta-8 from industrial hemp, it is legal.

Meanwhile, delta-8 sellers in numerous states have received significant body blows. A growing number of states are banning the sale of the cannabinoid. This is the case even in places where recreational marijuana is legal. Illinois, for example, legalized adult-use cannabis in 2019 but is intent on regulating the sale of delta-8.

It seems that even if federal law doesn’t prohibit delta-8, a majority of states could. It appears as if the main concern is safety, something consumers must be wary of when buying delta-8 in South Carolina.

How to Use Delta-8 Legally in South Carolina

At present, no special rules govern the sale of delta-8 in South Carolina. You can legally purchase products online or in stores if you’re aged 21+. However, one big problem is that creating D8 requires little more than solvents, acids, and a home chemistry kit. With a lack of regulation in the market, the number of low-quality products available is concerning.

Far too many amateur chemists are trying to cash in on the delta-8 craze. The result is a slew of hemp products filled with residual chemicals. For instance, acetic acid is commonly used to create D8. However, inhaling it is potentially extremely dangerous.

It is impossible not to create D9 during the conversion process. Isolating and separating it requires a lot of skill.

A California lab called InfiniteCAL performed testing on over 2,000 samples of delta-8 THC products in 2020. Incredibly, just six of them were compliant with legal delta-9 limits! Only two of these products were pure delta-8 THC extract. It is impossible not to create D9 during the conversion process. Isolating and separating the two cannabinoids requires expensive equipment and a lot of skill.

Even more concerning was the number of other components discovered in the test results. As Josh Swider of InfiniteCAL says, “Sure, 90% of the product might be delta-8, but what if the other 10% is something that could kill you?” Disturbingly, some low-grade products include bleach.

When shopping for delta-8 in South Carolina, make sure the brand in question can produce third-party lab reports from reputable labs. It is becoming increasingly common for dodgy brands to ‘buy’ lab reports to make their products look authentic. Research the lab just as you investigate the brand.

Ultimately, there is still an element of confusion over the federal legality of delta-8. It seems that lab-based D8, which comprises basically every single product on the market, is federally illegal according to the DEA. However, there are ongoing court cases where groups are challenging the Administration’s stance.

At present, then, it is best to focus on state laws. Residents of South Carolina aged 21+ can legally buy delta-8 within their state. However, please take great care to research every brand you’re interested in using. Many states are banning or regulating the compound due to safety concerns. Sticking with a trustworthy brand such as Premium Jane remains your best bet in an industry gripped with uncertainty.

Related article
What Are the Best Delta-8 Tinctures & Oils on the Market?

The most reliable brands…

Will Delta-8 THC Get You High?