Oregon has long had a positive relationship with marijuana and hemp. Even before the state legalized MMJ, Oregonians used cannabis at a much higher rate than other American locations. In 1975, approximately 19% of residents used it; this was just two years after decriminalization.

One would expect the state to permit CBD freely. You may even think that the hemp industry suffers because of easy access to marijuana. Keep reading to see if these suppositions are true and learn more about the legality of CBD oil in Oregon.

Oregon was one of the first states to legalize MMJ. It did so via Measure 67 in 1998. From 1999 to 2005, the rate of cannabis use in the state was 45% higher than the general American population. It was only a matter of time before full legalization occurred.

However, marijuana advocates had to wait until 2014, when Measure 91 was approved. At this point, the state quickly moved to crack down on low-quality products. By early 2017, only dispensaries with an OLCC license were permitted to sell marijuana to recreational users.

By early 2017, only dispensaries with an OLCC license were permitted to sell marijuana to recreational users.

Today, recreational users can carry up to an ounce of usable cannabis in public and buy the same amount. However, the possession limit rises to eight ounces in a private residence. You are also allowed to grow four plants at home and possess a maximum of 10 seeds.

Surely, all of the above means Oregonians don’t think twice about CBD? On the contrary, the cannabinoid’s propensity to help users without causing an intoxicating high is very appealing. Click on the link to learn more about the possible benefits of CBD oil.

Is CBD Oil Legal in Oregon?

Unlike some states that confuse matters, it is apparent that you can legally buy CBD oil in Oregon. It has been possible ever since the state fully legalized cannabis in 2014. The same year also saw the passing of a Farm Bill act that enabled farmers to grow hemp as part of a pilot program.

Although it was a step forward, it was a far cry from the freedom provided by the 2018 Farm Bill. The updated legislation allowed farmers to grow the hemp crop as long as it contained less than 0.3% THC. Currently, Oregon continues to follow the same CBD classification regulations as outlined by the latest version of the Farm Bill.

Barring inhalant delivery systems (such as smoking and vaping), there are no restrictions on selling CBD products in Oregon for adults aged 21+.

Before you look for Oregon CBD oil, please be aware of a recent legislative change. Governor Brown signed HB 3000 into law in July 2021.

It limits the sale of adult-use cannabinoids to people aged 21+. Any product containing more than 0.5mg of THC is considered an ‘adult-use cannabis item.’ Therefore, before buying any CBD item, check the COA to see the total THC content. If it is above 0.5mg, you can’t buy it if you’re 20 or younger.

An exception is made for MMJ cardholders who can access such products if aged 18+. For the record, the limit applies to a combination of THCs, including delta-9 and delta-8.

However, once you’re aged 21+, there is no limit on the amount of hemp-derived CBD products you can possess, with a maximum THC content of 0.3%.

There are limits on possession of CBD products that come from marijuana. At present, you are allowed a maximum of 16 ounces in solid product form, 72 ounces in liquid form, and one ounce of concentrate.

Regulation of CBD in Oregon

Users should also know that the Oregon Department of Agriculture (ODA) oversees and regulates hemp-derived CBD products. There are no special requirements for the sale of such products. However, regulations exist for labeling, testing, and cultivation. That said, the rules vary for hemp and cannabis.

For example, hemp products for human consumption or use must include the ODA’s blue hemp symbol. Products containing any marijuana must have a rectangle with a white weed leaf and an exclamation point in a box with a red background. 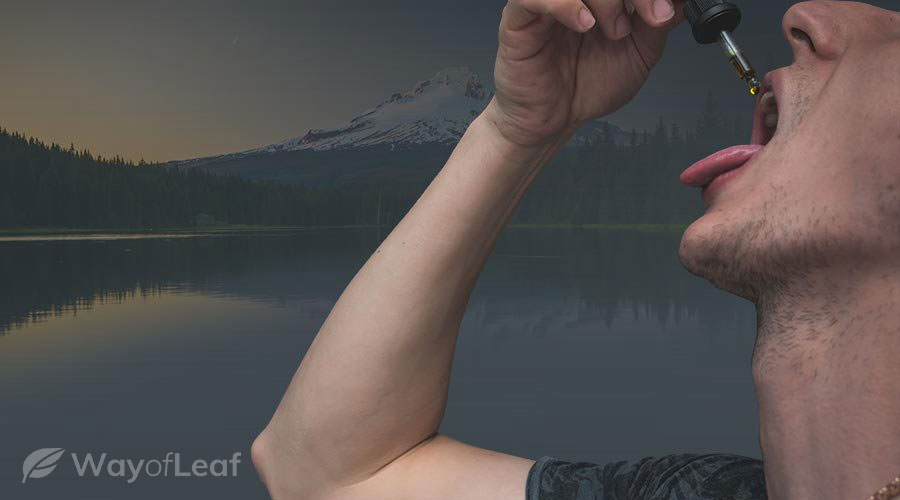 Also, all CBD products must include a warning that states it comes from hemp and could have THC. This warning must also state: “Keep out of reach of children.” The FDA’s anti-CBD stance means manufacturers must say: “This product is not approved by the FDA to treat, cure, or prevent any disease.” Concentrates or extracts for retail sale must be lab tested for solvents, pesticides, CBD, and THC content.

Is it Legal to Grow Hemp in Oregon?

Yes! Indeed, by 2017, more than 100 farmers were already planning for an estimated 1,300 acres of hemp. This is thanks to the state’s progressive attitude towards the Cannabis sativa plant. From 2015 to 2018, there was a twenty-fold increase in state licenses to grow hemp in Oregon.

In 2019, there were 50,000 planted acres of hemp in Oregon. It was #1 for hemp production in the United States and seemed certain to continue on an upward trajectory. However, the hemp boom seemed to end across the country in 2020. Oregon, in particular, suffered as wildfires caused havoc.

In 2021, it was estimated that at least 80% of farmers in southern Oregon opted out of growing hemp. Even those who continued drastically decreased the acreage dedicated to cultivating the plant.

By 2018, Oregon had an estimated one million pounds of marijuana flower in its system, along with 350,000 pounds of edibles, tinctures, and extracts.

It seems as if the hemp industry in Oregon is going the same way as marijuana cultivation. By the middle of 2018, Oregon had an estimated one million pounds of marijuana flower in its system, along with 350,000 pounds of edibles, tinctures, and extracts.

Between 2015 and 2018, the price of a gram of weed fell from $14 to $7. As supply is significantly outstripping demand, enormous amounts of marijuana are going to waste. Even with reduced production, the same thing could happen with the hemp industry.

Those looking to grow hemp commercially in Oregon should source certified seeds. For the record, Oregon State University began certifying seeds in June 2019.

You can also grow up to a maximum of four cannabis plants in Oregon without an approved cultivation registration. This means you can cultivate hemp or marijuana plants as long as the total number doesn’t exceed four.

Where Can I Buy Oregon CBD Oil?

Residents are fortunate to have an immense number of options for buying CBD oil in Oregon. We’ve taken the liberty of selecting five high-quality physical stores selling CBD in the state. Please note that some of these locations also sell marijuana.

However, not everyone can access a physical store. Despite a relatively small population, Oregon ranks inside the top 10 states in terms of area. If you don’t have a vehicle or easy access to public transport or want convenience, it is worth shopping for CBD oil online.

The following five top-rated CBD sellers deliver to Oregon and offer COAs with their products. They also use high-quality hemp and ensure every item contains less than 0.3% THC. However, you will need to check the lab reports to determine the total THC content if you’re 20 or under.

The FDA doesn’t approve CBD as a medicine, but it is prevalent in Oregon. There are CBD sellers in every major town in The Beaver State. You can also order online, with reputable brands bringing high-quality CBD to your doorstep.

Although it is tempting to try and save a little money, we don’t recommend purchasing ‘cheap’ CBD oil. There is a stark difference between getting value for money and buying garbage. If you choose low-quality CBD oil, it will fail to provide you with the results you crave. Moreover, it will likely mean you immediately discount it as a means of assistance.

If you would prefer to use THC, check out our guide on how to get a medical marijuana card in Oregon. Of course, all adults aged 21+ can also buy up to an ounce of marijuana.