President Trump signed the Hemp Farming Act into law in December 2018. It permitted the growth of industrial hemp in the U.S. Each state had to submit its program to the United States Department of Agriculture for approval. Today, the cultivation of industrial hemp is legal in every state once you have the right licensing. What the Farm Bill did not do was federally legalize CBD.

As a result, each state is in charge of its CBD laws. It is a similar story with marijuana, a federally illegal substance. A growing number of states are creating MMJ programs, while others permit recreational use. Up until recently, South Dakota didn’t have a medical marijuana program. However, the November 2020 elections changed everything. Find out how in our guide to CBD and marijuana laws in South Dakota.

Is CBD Legal in South Dakota?

South Dakota residents remain unsure about the legality of CBD in their state. In 2017, the state added CBD to its list of substances tightly monitored by the government. Lawmakers believed that CBD could cause addiction and was a substance with a high risk of abuse.

However, they exempted cannabidiol as a ‘drug product approved by the FDA’ in its definition. In essence, South Dakota permitted the use of Epidiolex. However, Senate Bill 22 reversed this decision and placed Epidiolex on Schedule IV of its controlled substances list.

There is an acknowledgment that patients with epilepsy can use cannabidiol if a doctor prescribes it.

In March 2019, the state’s Attorney General (AG), Jason Ravnsborg, issued a statement. He said that current South Dakota law made industrial hemp and all forms of CBD illegal. Epidiolex was the exception, yet even that drug was on the list of controlled substances.

There is also an acknowledgment that patients with epilepsy can use cannabidiol if a doctor prescribes it. Incidentally, a Schedule IV drug has a low potential for abuse. However, companies can only sell it freely if the FDA approves the drug.

It is Still a Gray Area

One would have expected Ravnsborg’s statement to clarify matters, but it did not. His chief of staff later said the statement is based on the definition of cannabis as a controlled substance. The AG believed that CBD oil is a product of the marijuana plant, the genus cannabis.

However, according to some South Dakota attorneys, these legislative changes resulted in a gap in SD’s controlled substance laws. They believe the gap means CBD oil product legality is open to interpretation.

The recent legalization of medical marijuana has not changed things. MMJ officially became legal on July 1, 2021. However, it hasn’t changed CBD laws in South Dakota a great deal. All it does is ensure that medical marijuana cardholders can purchase CBD derived from hemp or marijuana. Yet legal sales have yet to begin.

Mark Vargo is the attorney for Pennington County State. He admitted that he doesn’t prosecute CBD oil cases. Vargo suggests that South Dakota law doesn’t criminalize CBD as it is currently written. This is as long as the product contains cannabidiol and doesn’t come from marijuana.

Related article
Do I Need a Medical Marijuana Card to Buy CBD Oil?

Clearing up the confusion...…

At present, most South Dakotan lawyers look at each CBD oil charge on a case-by-case basis. They recommend that state residents approach the cannabinoid with caution.

Broadly speaking, you can find CBD oil in South Dakota with numerous physical stores to choose from. Dozens of online brands also send CBD packages to the state. However, please note that several major online sellers, such as PureKana, still do not ship to South Dakota.

Ultimately, there remains an element of risk when buying CBD oil in the state.

Is Hemp Legal in South Dakota?

The answer is ‘yes,’ but it is a recent development. Governor Noem is notoriously anti-hemp. However, in late 2019, she indicated that she was ready to soften her position. On March 27, 2020, she signed House Bill 1008 into law. After a one-year-long standoff, South Dakota finally legalized industrial hemp, and the bill went into effect immediately. 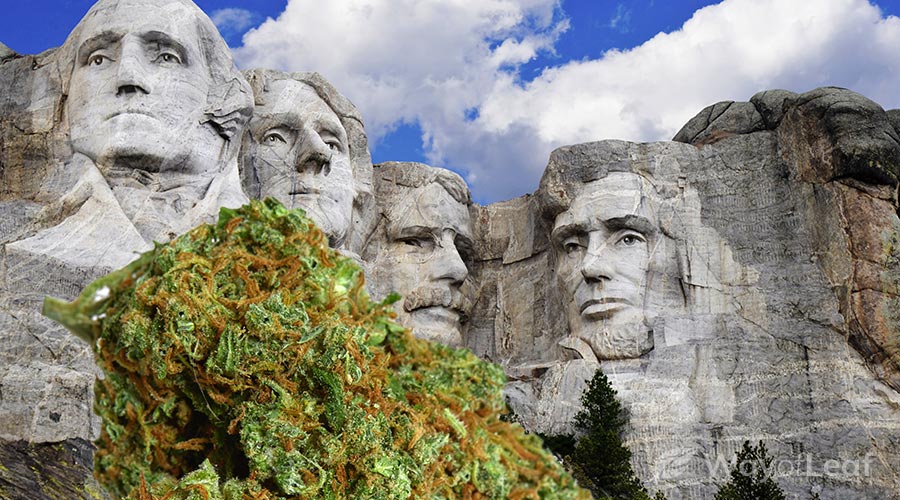 In August 2020, the South Dakota Department of Agriculture submitted its industrial hemp plan to the USDA. The USDA approved this plan in October 2020. As a result, farmers started growing hemp in 2021. Applicants must pay a non-refundable $50 fee, a $500 license fee and undergo a background check. A grower license is valid for 15 months from the issue date.

What Does This Mean for the CBD Industry?

This law should significantly impact CBD oil’s legality in South Dakota. HB 1008 allows people to transport hemp through the state if they have a permit. It also states that anyone who travels with hemp automatically consents to searches to ensure they do not carry cannabis.

Interestingly, the new hemp growing law enables licensed processors to make industrial hemp products. These are defined as a finished consumer or manufactured product containing CBD packaged for individual sale. Such products must not contain more than 0.3% THC.

This rule suggests that CBD IS legal in South Dakota as long as it comes from hemp and has a maximum of 0.3% THC. However, HB 1008 doesn’t indicate whether ‘hemp processing’ specifically includes CBD oil products.

Please note that the law also prohibits the sale of hemp for inhaling or smoking. Therefore, you can get CBD oil, edibles, and topicals. However, you cannot smoke hemp flower or vaporize hemp juice.

Where to Buy CBD Oil in South Dakota?

Despite the uncertainty, CBD oil sellers are operating in South Dakota. Here are five that have excellent customer reviews.

It is a little trickier to find reputable online CBD sellers that ship to South Dakota. However, here are five that seem to send their products to The Mount Rushmore State:

Be sure to check each brand’s terms and conditions or FAQ section for clarity on the shipping process. South Dakota residents may prefer to try an online brand rather than risk being seen going into a physical store.

Is Marijuana Legal in South Dakota?

The answer is ‘yes,’ for medical use, but residents must wait. South Dakota residents voted in favor of medical and recreational cannabis programs on November 3, 2020. Almost 70% of voters said ‘yes’ to Measure 26, the initiative to legalize MMJ in South Dakota.

Constitutional Amendment A, regarding recreational cannabis, was much closer. However, 54.2% voted for it to pass, thus legalizing adult-use cannabis in the state.

Unfortunately for marijuana advocates in the state, Amendment A was struck down as unconstitutional in February 2021. The challenge said that the recreational law violated Amendment Z, also known as the ‘Single-Subject Rule.’ Although there was an appeal, the South Dakota Supreme Court upheld the decision on November 24, 2021.

Currently, recreational marijuana remains illegal in the state. Medical cannabis is permitted but the process of starting sales is slow.

Recreational marijuana campaigners brought another ballot measure to voters in 2022. Perhaps somewhat surprisingly, the measure was rejected, with 53% of voters saying “no.”

Medical marijuana officially became legal in South Dakota on July 1, 2021. However, wide-scale legal sales didn’t begin until 2022. Very few people have been approved for an MMJ card in South Dakota at present, and it will be some time before the program becomes well-established.

MMJ cardholders can buy and possess up to three ounces of marijuana. Other marijuana users in South Dakota face strict penalties since the substance is not decriminalized. Possessing up to two ounces is a misdemeanor with a possible 12-month jail term if convicted. You’ll be charged with a felony if caught with more than two ounces of marijuana on your person.

The unlawful sale of any amount is a misdemeanor with a mandatory minimum prison term of 15 days, and you could spend up to a year behind bars. The sale of more than half an ounce is a felony that carries a penalty of up to two years imprisonment.

Cultivation is also illegal. The punishment depends on the aggregate weight of the plants and is the same as possession penalties. If your plants have more than a pound of usable marijuana, for example, you face up to 10 years in jail!

After many years of effort, campaigners have finally managed to achieve their medical marijuana legalization goal in South Dakota. What’s surprising is that the state’s voters also voted for recreational cannabis. Alas, the state has since struck down the adult-use law, and the MMJ program has yet to begin in earnest.

Even the CBD rules remain shrouded in mystery. A statement from the Attorney General in 2019 suggested that the cannabinoid remained illegal in the state.

However, after a protracted battle, the state’s governor finally signed a law that brought an industrial hemp program to SD. The USDA approved it, which is good news for the state’s CBD sellers. The new bill also suggests that CBD is now legal in South Dakota in certain forms. Yet, it is arguably better to remain cautious until there is official confirmation.

Therefore, we must state that you buy CBD in South Dakota at your own risk. It is one of the few places where state laws surrounding cannabidiol are stricter than their federal equivalent.

Is CBD Legal in All States? [2023 Updated Explanation]

The answer isn't that simple...