Medically reviewed by Lynn Marie Morski, MD, Esq.
Written by Dylan Baker, B.S.
7 min read
3 comments
Read Later
This article may contain links to some of our affiliate partners. These are brands we trust and brands we feel represent the highest quality standards. When clicking links, we may earn commissions to help support our site. Learn more by reading our full disclaimer.

Before we begin this article, we want to highlight some potential discrepancies in terminology. While we use the term “CBD vape oil” numerous times throughout, we do not imply that using CBD oil in a vaporizer is safe. Not all CBD oils are compatible with vaporizers, and health risks may occur from vaping CBD oil incorrectly. Make sure the product you are vaping is specifically made for vaping devices.

In 1964, the U.S. Surgeon General released its first national report on smoking and general health. Before then, many people weren’t aware of how much damage cigarette smoking was capable of. Perhaps this is why the average life expectancy for males born in 1930 was 58!

These days, we’re well aware of the risks. We also know about potentially safer alternatives to tobacco, such as CBD vape oil and e-cigarettes. The word “potentially” is important because neither option is completely safe, but both are likely far less harmful than tobacco smoking.

Furthermore, there is a substantial body of medical literature outlining the possible benefits of CBD. Vaporizing the substance offers the chance to feel the effects quickly, and vaping also has a higher rate of bioavailability than CBD oils, topicals, or gummies.

This article discusses the benefits of CBD vape oil compared to other popularly inhaled substances and explores the science behind some claims.

What Is CBD Vape Oil?

It is more accurate to classify CBD vape oil as CBD “e-liquid” or CBD “vape juice” because it isn’t anywhere near as thick as the CBD oil you consume sublingually. It is a liquid containing cannabidiol specifically designed for use with a vaporizer. It is unwise to consume vape juice orally because, while it probably won’t cause many adverse effects, using it in this fashion is wildly inefficient.

Vaping your CBD provides a substantially higher bioavailability rate than oral or sublingual consumption. This means a higher percentage of CBD has an effect. Therefore, it makes no sense to waste money on an inefficient consumption method!

Apart from hemp-derived CBD, vape oil will contain a thinning agent such as PG or VG to decrease the viscosity of the liquid. If you try to vape regular CBD oil, it will likely clog your device. Vape products may also contain natural flavoring. There are concerns over whether thinning agents are safe, so each user must decide if they’re comfortable with the risk.

For proponents of the substance, the benefits of CBD vape oil far outweigh the risks compared to cigarette or marijuana smoking, not to mention different methods of consuming cannabidiol. Let’s check out five such benefits.

Please note that research into CBD oil remains in its relative infancy despite the growing evidence in its favor. It is also illegal for any CBD seller to claim that their products “cure,” “treat,” “diagnose,” or “prevent” any medical ailment. Therefore, the following are potential benefits of CBD vape oil. 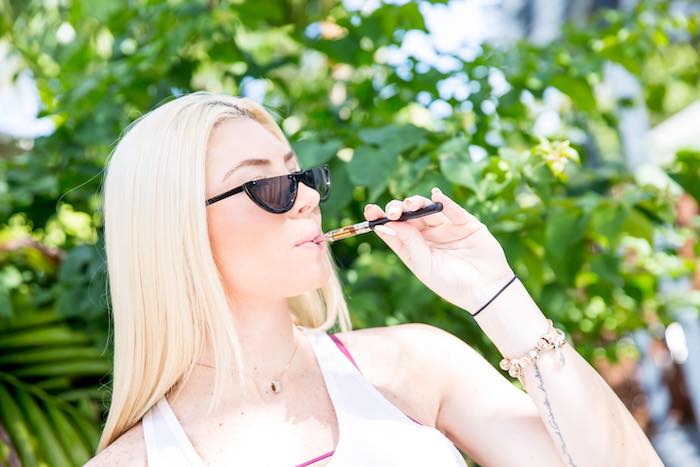 #1 – It’s Arguably Better for Your Lungs Than Tobacco Smoking

This claim is still up for debate. Institutions like Harvard Health have claimed that e-cig vapes are almost certainly “less deadly” than traditional cigarettes. However, Harvard researchers also point out that vaping comes with risks of its own.

Yet, in 2016, London’s Royal College of Physicians wrote that the long-term health risks of e-cig vaping were “unlikely to exceed 5% of the harm from smoking tobacco.” Research is ongoing, but the evidence to date suggests that while vaping is far from safe, it remains a better bet for your health than smoking.

There are also advantages relating to discretion too. The odor from vapor clouds is less pungent than tobacco smoke and dissipates faster. The scent also doesn’t stick to your clothes and the curtains!

Neither CBD nor THC is legal on a federal level. However, industrial hemp containing a maximum of 0.3% THC is thanks to the 2018 Farm Bill, whereas marijuana remains a controlled substance.

Therefore, while CBD isn’t technically legal in the United States, it is broadly tolerated in virtually every state. That is, as long as it comes from hemp and has no more than 0.3% THC (0.1% in Idaho and 0% in Kentucky). As a result, you should find it easy to buy full-spectrum, broad-spectrum, and isolate products online and in physical stores.

In contrast, marijuana remains completely illegal in multiple states, and in others, you need a valid MMJ card. Therefore, CBD vape oil is far more accessible than marijuana oil with a high level of THC.

#4 – It Could Help You Quit Smoking

There are many techniques one can employ to try and successfully kick a nicotine habit. According to this 2013 report, CBD could act as a “potential treatment for nicotine addiction … that warrants further exploration.” Without a doubt, this certainly sounds like one of the major benefits of CBD vape oil to us.

The jury is out on this, but it is intriguing to know that CBD could help someone quit tobacco smoking.

This one is open for debate as some will argue that the effect of smoking happens just as quickly as vaping. However, we’re referring to its advantages over other forms of CBD consumption on this occasion. Users often feel the effects of vaping in moments, compared to sublingual CBD, which can take minutes, and edibles, which can take hours.

CBD vape oil is among the fastest-acting forms of Cannabis sativa L. consumption, along with smoking and dabbing. Therefore, if you want to quickly combat issues such as the sudden onset of migraines, anxiety, or panic attacks without intoxication, you might seriously want to consider CBD vape oil.

Health Benefits of CBD Vape Oil – What Does the Research Say?

We briefly mentioned the potential health benefits of CBD vape oil above. Let’s check out eight such benefits.

A study published in The Permanente Journal in 2019 found that CBD could help improve a person’s sleep quality. Approximately two-thirds of the 72 adults who completed the study reported improved sleep scores after a month of CBD usage.

There are studies going back to the early 1970s outlining CBD’s usefulness for combating epilepsy, not to mention a wide variety of clinical trials offering positive results.

Such is CBD’s effect on seizures that the FDA has approved a CBD pharmaceutical product (Epidiolex) as a prescription drug for patients with the seizure-inducing conditions of Dravet syndrome, Lennox-Gastaut syndrome, and tuberous sclerosis complex (TSC).

The above-referenced study in The Permanente Journal also found that CBD could reduce anxiety. Almost 80% of the volunteers reported decreased anxiety scores after a month of CBD use, and the scores remained that way for the duration of the three-month study.

A study published in Autoimmunity in 2019 looked into the benefits of CBD on diabetic mice. The researchers found that non-obese diabetic mice who consumed CBD had a much lower risk of developing diabetes than those who did not.  The incidence of diabetes was 86% in the mice that didn’t consume CBD, compared to 30% in mice that did.

Related article
Cannabis, Schizophrenia, & Psychosis: What You Should Know

The best strains to help with …

There is also evidence that CBD could help regulate nausea and vomiting, and it achieves this by interacting with receptors in the brain that release serotonin. A pharmaceutical drug that contains synthetic THC called Marinol is FDA approved to treat cancer chemotherapy-induced nausea and vomiting.

Cardiac ischemia is when the heart is receiving an inadequate blood supply, and infarct is when ischemia leads to tissue death. A study published in the British Journal of Pharmacology in 2010 found that CBD helped reduce the number of ischemia-induced arrhythmias and reduced infarct size in rats when administered before ischemia.

Where to Buy CBD Vape Oil?

The CBD vaping industry experienced a massive increase, but the bubble seemed to have burst with the modification of the 2010 PACT Act in December 2020. The legislation was originally designed to restrict the mailing and taxation of cigarettes and smokeless tobacco products.

However, the update added Electronic Nicotine Delivery Systems (ENDS) to the list. As a result, CBD brands can no longer use USPS to send vape products via mail directly to consumers. Companies must find alternative arrangements, and many decided that the additional cost wasn’t worth it and ceased the production and sale of CBD vaping products.

Yet, there are quite a few high-quality sellers offering CBD vape oil and vaporizers, including:

Final Thoughts on the Top 5 Benefits of CBD Vape Oil

While there are some drawbacks to vaping in general, CBD vape oil has many possible health benefits. You might prefer other methods of CBD consumption, but vaping offers among the highest bioavailability, not to mention the fastest effects. 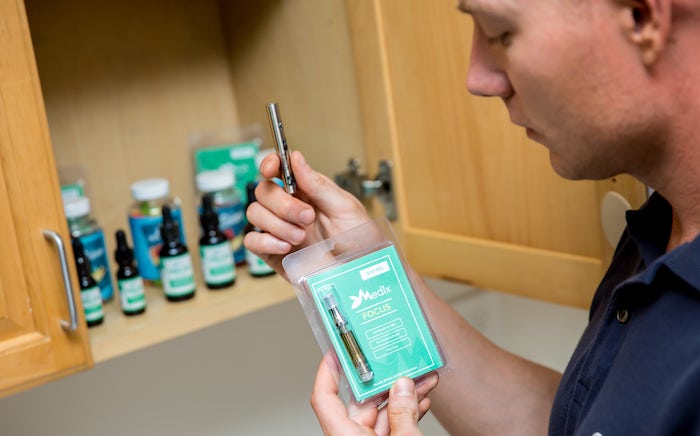 We invite you to explore the downsides of vaping and determine whether you’re comfortable with the risks. If so, you can still find high-quality CBD vape oil online despite the devastating impact of the PACT Act. If not, you can always buy CBD oils, tinctures, gummies, or topicals online.

The Benefits of Vaping CBD: A Parting Word from Dr. Ted Valley

It is important to note as a disclaimer that we still do not know what the true safety concerns related to vaping products might be. The research out there is a mixed bag, and even though this is obvious, nothing is without risk.

One study suggests that the flavoring agents used in vaping have a chemical compound that reacts negatively with lung tissue and stem cells of the lung. This same study also suggests the possibility that heavy metals from the heating element may ionize in the vape cloud before entering the lungs (and subsequently) being absorbed into the bloodstream.

Why CBD Oil Won’t Work for Everyone [Answered]

45
9 min read
Join The Discussion
TOC
Premium
Your subscription has ended
If you love cannabis and want to support our site, join WayofLeaf Premium today and unlock
Best of all, part of your membership fee will go towards supporting the fight to legalize cannabis.
Sign Up for WoL Premium
Not now
I already have an account
×
Log in to Your Premium Account