Written by Patrick Lynch, M.A.
4 min read
0 comments
Read Later
All information on this website is for general informational purposes only and is not intended or implied to be a substitute for professional medical advice, diagnosis or treatment.
London Pound Cake Overview
The London Pound Cake strain is a difficult to obtain indica-dominant hybrid with a high THC content. It offers a sweet lemon taste, making it easy to understand why the breeders named it after a dessert. This strain is best used in the evening as a means of relaxing because it causes mild sedation, along with an uplift in mood. 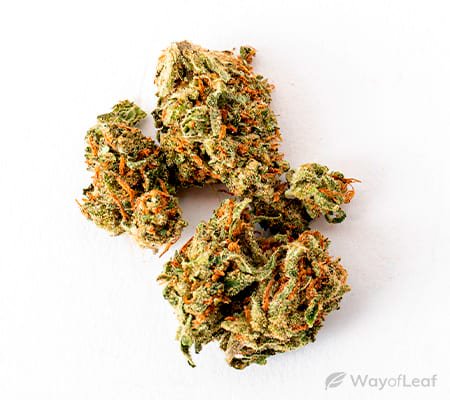 A London Pound Cake is a delicious delicacy made from equal parts of sugar, butter, flour, and eggs. Then you add vanilla bean icing and flavor with lemon tea. The marijuana strain named after this sweet treat also has a refreshingly sweet lemon taste but is likely to have a slightly different effect from the cake! Read on to learn more about this powerhouse marijuana strain.

What Is the London Pound Cake Strain?

London Pound Cake is a highly potent indica-dominant marijuana strain. There is some contrasting information available online regarding this strain’s breeder. One suggestion is that a breeder based in Spain, Heavyweight Seeds, is responsible for creating it. However, L.A.-based Cookie Fam Genetics is far more likely to be the true breeder.

When we say this isn’t a strain for novices or users with a low THC tolerance, we mean it! London Pound Cake is extremely high in THC, even by the standards of a modern hybrid. 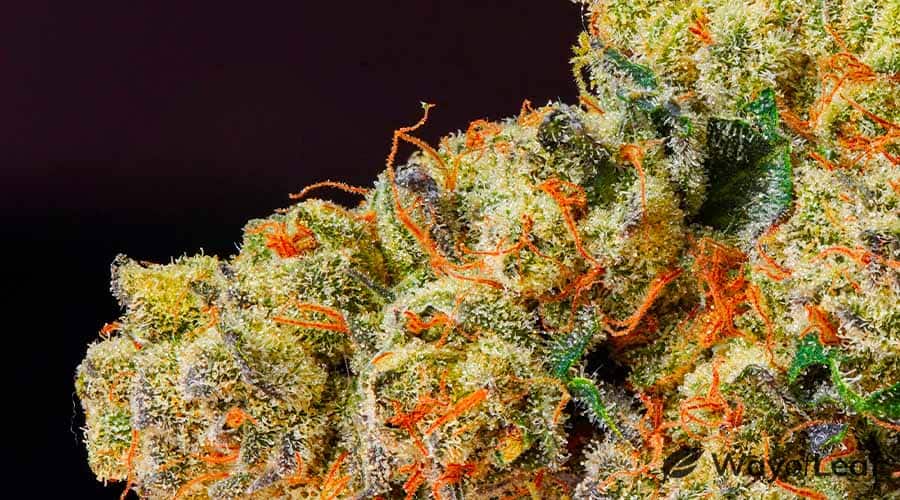 As the high takes hold, you’ll likely feel relaxed from the very onset. It is also probable that your mood will improve as the euphoria you experience helps you forget whatever troubles you might be experiencing at that moment. After a while, the body high becomes more prevalent, causing mild sedation. While you’ll feel uplifted and content to stay wherever you’re lying or sitting, London Pound Cake generally doesn’t cause heavy couch lock.

Even so, it is probably best to use it later in the evening when all your meaningful tasks are done for the day.

The breeders named this strain after a lemony dessert for a good reason, as you’re about to find out!

The sweet lemon scent is immediately apparent when you take the buds out of the bag. When you light up some London Pound Cake, you may also smell woody and earthy notes, along with hints of fruity berries.

As delightful as this strain’s aroma is, the taste manages to exceed it! Apart from the sweet lemon flavor, you also enjoy hints of grapes and berries. There is also a robust nuttiness that gives London Pound Cake added punch. Upon the exhale, you may get the slightest taste of vanilla cookies and citrus zest that lingers on the tongue.

London Pound Cake boasts olive green nugs shaped like spades. The strain is laden with thin orange pistils and sprinkled with a generous layer of trichomes, indicating its potency.

You’ll likely find it challenging to get your hands on London Pound Cake seeds. However, if you look hard enough and are prepared to pay a significant sum, you’ll eventually achieve your goal. Unfortunately, the seeds probably won’t be feminized, meaning you must remain vigilant to spot the male plants before they pollinate your entire crop. 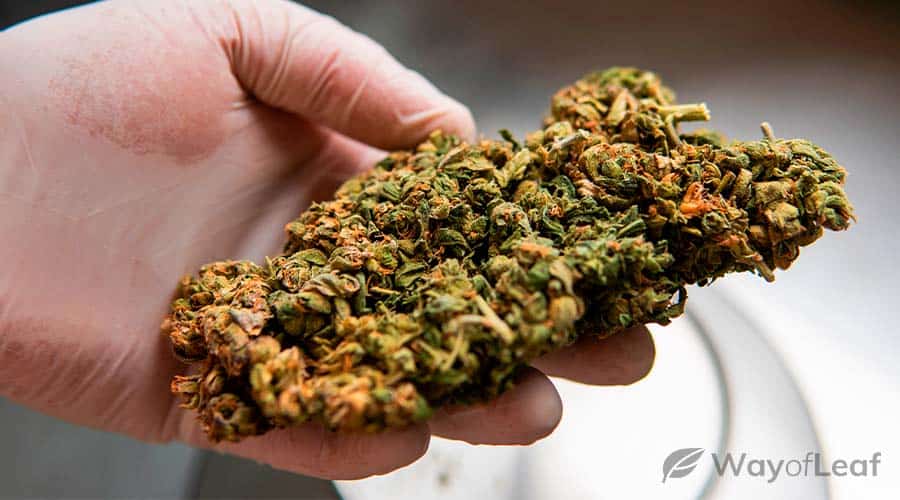 London Pound Cake is a marijuana strain that thrives indoors or outdoors. When cultivated outdoors, this strain is ready for harvest by the middle of October. However, you’ll need to live in a Mediterranean climate to get the best out of these plants.

For most growers, keeping their London Pound Cake plants indoors is more feasible. If you do so, please note that the flowering time is around 8-10 weeks.

This strain has an exceptionally high THC content, meaning one must treat it respectfully! London Pound Cake’s THC can range from 26% to 29%, with most versions leaning closer to the higher end of that scale.

There is minimal CBD in London Pound Cake, certainly far less than 1%.

London Pound Cake is a cross of Sunset Sherbet and an unknown but obviously potent indica-dominant strain. Consequently, it is about 75% indica and 25% sativa.

The London Pound Cake strain is extremely versatile and is used by MMJ patients for various reasons. It results in an uplifting feeling, which means it is potentially suitable for individuals with PTSD, depression, and anxiety. As it provides a highly relaxing feeling of intoxication, you might also find that it’s an ideal strain if you want to de-stress at the end of a challenging day.

While London Pound Cake doesn’t result in heavy sedation or couch-lock, it could prove effective if you need something to help you get to sleep. Take a few puffs, dim the lights, play some gentle music and let your body relax.

Finally, as it is high in THC, London Pound Cake might help alleviate chronic pain.

With a THC content of close to 30%, there’s no question that London Pound Cake is a strain to approach with caution and respect. If you have a fairly low THC tolerance or are a new marijuana user, the potency of this strain might prove overwhelming. In this case, you could end up with dizziness and nausea as side effects. Furthermore, while it won’t sedate regular weed users, it may cause novices to fall asleep.

Other common side effects include dry eyes and cottonmouth.

Ultimately, the London Pound Cake strain is a delight if you’re a regular marijuana user with a high THC tolerance. It is extremely potent and provides a relaxing yet not overly sedating experience. Users often report feeling happier and more at ease with themselves when intoxicated by this strain.

It has a sweet, lemony scent that is also apparent in its flavor. London Pound Cake is a moderately challenging strain to cultivate. The biggest issue is finding the seeds and then getting rid of the males before it is too late!