Written by Sam Eskenazi, B.A., PGCA
6 min read
0 comments
Read Later
All information on this website is for general informational purposes only and is not intended or implied to be a substitute for professional medical advice, diagnosis or treatment.
Green Gelato Strain Overview
A psychedelic, super flavorful strain, this is another entry in the long list of marijuana must haves, so if you see it, definitely get it. 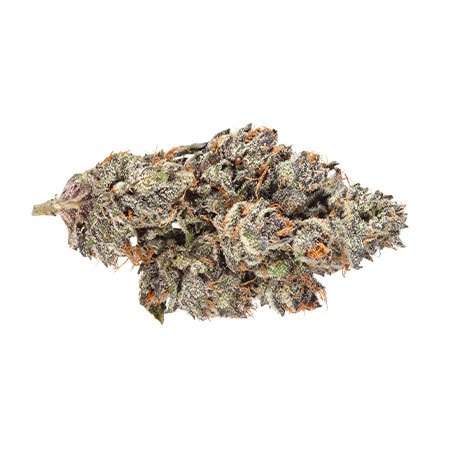 There are growers out there who are considered classic producers of marijuana; people that produce hits time and time again. Royal Queen Seeds is definitely one of them; and one of their latest strains, Green Gelato, definitely lives up to that hype.

A cross between the classic Thin Mint Cookies and Sunset Sherbet, this intensely dank and potent strain not only feels great, but tastes great as well.

Let’s investigate this intriguing new bud and find out whether it’s deserving of its acclaim and what makes it so amazing.

What Is the Green Gelato Strain? 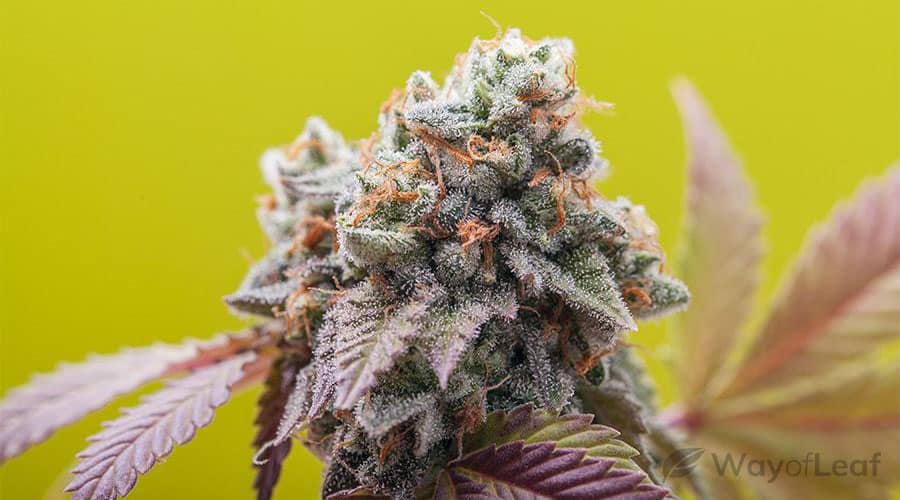 However, instead of a confusing bundle of flavors and experiences, Green Gelato is surprisingly creamy and pleasant, both in its flavor and its effects.

Green Gelato is surprisingly creamy and pleasant, both in its flavor and its effects.

The high sets in pretty quickly after you first smoke, with some users feeling under the influence before they even finish their first toke. You will almost immediately notice the world around you dilating and shifting, altering your perception in small and uncountable ways.

Your head will buzz, and your body will feel like it is almost vibrating with these intense feelings. Your body will begin to develop a sensation of not wanting to move around much, but not so much as locking you in place. It is quite psychedelic, feeling very THC-laden, and induces an elevated sensitivity to your surroundings.

However, it is still a super comfy strain whose effects are calm and serene, making it worthwhile to consider when you are looking to chill out and have a good time.

With a name like Green Gelato and parents of Thin Mint Cookies, it would make sense for one of the big draws of this strain to be its flavor. So, what kind of aroma and flavor profile can you expect from Green Gelato?

The first smell you will notice on getting close to Green Gelato is the tang of citrus. It won’t be like any specific fruit, though. Instead, it smells generally like citrus fruits, with other elements of fruitiness. This is clear evidence of its Sunset Sherbet parentage, but there is a lot more present as well.

After breaking the buds open, Green Gelato starts to smell earthy, dank, and a little bit sweet. There is an element of pine and some cake notes that make the whole experience a mixed bag of different flavors all at once.

Overall, it’s durable, slightly skunky, and packs a variety of scents into one attractive package.

The taste of the Green Gelato strain is quite similar to its aroma, but the key quality is the easy smoothness with which you can smoke it. The smoke itself is clear, smooth, and a little bit heady, with none of the complex bitterness that some strains suffer from.

The taste is pretty much what you would expect from the aroma, only that the pine and sweetness is a lot more apparent. This makes it a lot clearer that it comes from Thin Mint Cookies, reminding you of that dank, sweet, and slightly mellow tartness of the Cookies strain.

The buds of this particular strain are pretty cute, being very thick and dense and looking heavier than it really is.

It is very attractive, boasting a multitude of orange pistils that make the green leaves burst with color. There is also just a touch of purple that denotes the high-quality, well-grown bud.

To ensure that you get this purple coloration – and indeed plenty of those valuable trichomes – you need to grow it yourself.

What do you need to know to grow Green Gelato for yourself?

Unfortunately, you won’t find it super easy to get Green Gelato strain seeds, as they are not readily available in the commercial market. Instead, hunt down a grower that already has some Green Gelato plants and beg a cutting. 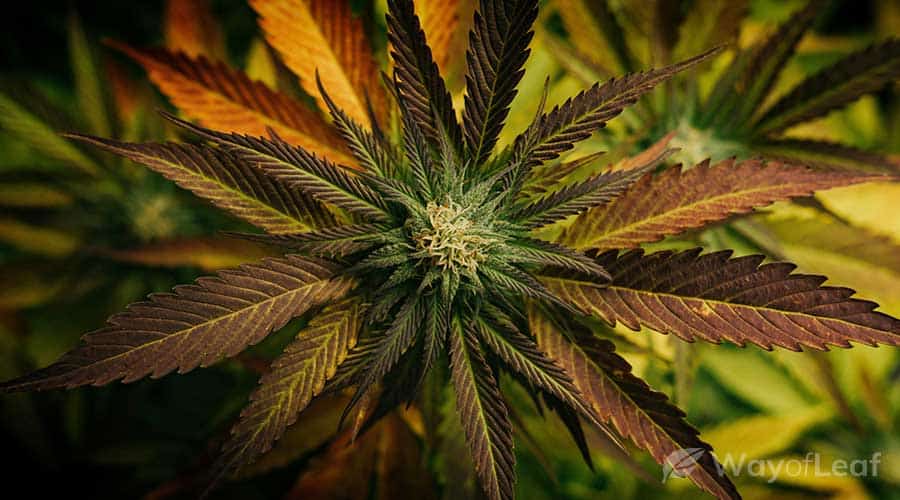 Once obtained, Green Gelato is a bit of a tricky strain to grow yourself. This is because of its need for a consistently warm temperature; it needs a pretty constant 75 degrees Fahrenheit to get going correctly. This means that you probably want to try and grow your Green Gelato indoors rather than outside, as you can more easily regulate the temperature.

Plus, you can do a few interesting tricks, such as blasting it with cold conditions just before the bud starts developing. This is what encourages anthocyanin pigments, which produce that beautiful purple coloration and create some of the more subtle aspects of Green Gelato’s flavor.

The only thing to keep in mind is that this strain, like many others in the same genetic tree, has an especially noticeable aroma as it grows. If you are trying to keep your Green Gelato plants a secret, either from housemates or neighbors, then invest in a filter to try and get rid of the immediately recognizable weed smell.

Finally, to encourage a better yield when it is time for harvesting, you should keep it well trimmed when it tries to grow tall rather than wide. All you need to do is cut off the top of the budding plant. This makes the plant more likely to grow sideways, thus producing more buds at the end when it comes time to harvest.

Green Gelato cannabis is well-known for its incredibly potent effects, so it would make sense to see a large number next to its THC rating.

Green Gelato varies in its THC concentration, but you can generally expect to find around 25% THC within any particular sample. This makes it an especially potent example of marijuana, so make sure you don’t smoke too much of it.

Even more importantly, ensure that a marijuana newbie doesn’t get their hands on this, as it can definitely prove too much for them to handle.

Unfortunately, while Green Gelato is well known for its medically beneficial properties, there isn’t really any CBD to speak of in this strain.

All the CBD that used to be there has been bred out, so as to make way for even more THC.

Of course, this doesn’t mean that there isn’t a plentiful list of significant medical effects of Green Gelato; in fact, there are all kinds of reasons to use Green Gelato to treat a condition.

The primary features of Green Gelato are its ability to induce pleasant feelings, as well as soothing your entire body.

This makes it great for dealing with issues resulting from pain, but also mental disorders. Those with depression, PTSD, or generalized anxiety can really benefit from Green Gelato, as it makes for a good evening out with a calm experience that helps you process your surroundings.

The best part about this strain’s effects is the fact that it makes you almost unaware of your body, which makes it absolutely perfect for dealing with pain and irritations. Instead of constant pain wracking your body, you can just zone out and enjoy this strain’s psychedelic effects.

It doesn’t really knock you out or send you to sleep, either, which means you can take this strain during the day. This is important, as what good is pain relief or a treatment for mental disorders if it also makes you fall unconscious?

However, there are a few potential ill effects of the Green Gelato strain that you need to keep in mind before you go straight out to buy it for yourself.

Possible Side Effects of the Green Gelato Strain

Every marijuana strain can be expected to come with a few unfortunate side effects if you aren’t careful. This is especially true when it comes to the Green Gelato strain, as it is so high in THC. With so much THC, it is no wonder that it induces such a potent psychedelic effect, but this can also have some dire consequences.

For starters, you will obviously experience a quantity of dry mouth and dry eyes. This is quickly dealt with, though, as you can just stay well hydrated. The real trouble comes from elevated anxiety and paranoia.

While this strain is excellent for treating those with anxiety, it can induce paranoia if you smoke too much.

While this strain is excellent for treating those with anxiety, it can ironically induce episodes of paranoia if you smoke too much. This is because of how much THC is present within this bud; it can overwhelm your senses and send you into a panic.

There is also the risk of developing headaches that make their way to the top of your head.

All of these side effects can, thankfully, be removed from the equation as long as you don’t smoke too much. Make sure to find out your individual tolerance level by carefully introducing Green Gelato to your system only a little bit at a time.

As long as you do that, and are especially careful, you shouldn’t really have any trouble whatsoever when it comes to Green Gelato.

Green Gelato is a typically intense marijuana strain with atypical effects and flavors. While it is suitably familiar when it comes to how it smells and makes you feel, it is the lingering, continuous effects that make it especially unique.

With an otherworldliness to its effects that leaves you almost dazed, Green Gelato has the power to make you forget all of your troubles and transcend this plane of existence into another one that contains no worries whatsoever.

So, whether you are trying to find a way to get through the day when suffering from mental disorders, or just want a potent strain to trip with, you should definitely make sure to try and get some Green Gelato.

It is pretty potent, though, so make sure you’re careful.