Written by Tiannah Pedler, M.A.
5 min read
18 comments
Read Later
All information on this website is for general informational purposes only and is not intended or implied to be a substitute for professional medical advice, diagnosis or treatment.
Cherry Pie Strain Overview
The Cherry Pie strain is a high-THC strain that is capable of inducing euphoria, happiness, and energy. It is a perfect social strain, or one for working on projects as it can help with creativity. Tasting of sweet cherry pie, this strain is as delicious as those fresh tarts mom used to make. 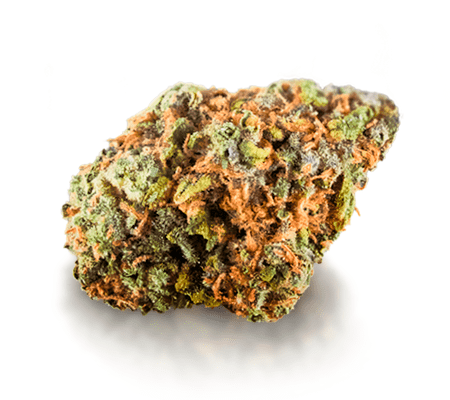 If you love weed and have a sweet tooth, then you’ll be in heaven once you get a hold of the Cherry Pie strain. Depending on the cut, this strain has a moderate to strong THC level and is capable of packing quite a punch. Certainly, the combination of fragrant baked goods in the scent and the mouth-watering cherry taste makes it a treat for the senses.

Experienced users and those in the industry have been well aware of Cherry Pie’s delectable taste and pleasant effects for quite some time. While it hasn’t won many awards, it did receive a respectable third place finish in the 2014 High Times Cannabis Cup. If you like baked cherry pie and have a penchant for getting high, keep reading to learn more about this sensational strain.

What Is the Cherry Pie Strain?

Cherry Pie weed is a strongly indica (up to 80%) dominant hybrid that is a cross of Durban Poison and Granddaddy Purple. With such rockstar parents, one would expect this strain to be top-shelf quality, and when you buy it from the right source, you won’t be disappointed.

Judging by the reviews of those who get to use it, Cherry Pie is a massive hit.

As well as providing users with a pleasant sweet and sour taste, Cherry Pie has a high concentration of terpenes. Myrcene is the most abundant terpene, followed, in no particular order, by linalool, alpha-pinene, limonene, and beta-caryophyllene. It is believed to have originated in California, and, judging by the reviews of those who get to use it, Cherry Pie is a massive hit.

The Cherry Pie marijuana strain doesn’t surprise you in terms of its smell. Many users have commented that it tastes like a freshly baked cherry pie as it gets taken out of the oven. However, you may be startled by how dank the scent actually is. Cherry Pie absolutely fills a room with a gorgeous tangy aroma which is akin to a combination of cherries, blueberries, and earthy spice.

Those who smoke Cherry Pie after often stunned by the skunky, piney taste they get from the first toke. Eventually, you will discover the sweetness of Cherry Pie, which provides a delicious smoked cherry flavor. The sticky and sweet taste, similar to glace cherries, remains on the tongue. Overall, the spiciness could cause novices to cough, and the flavor is definitely less pie, and more cherry!

The nugs are denser than Durban Poison and not as round as a cut of GDP. Good quality Cherry Pie will be relatively moist without any danger of crumbling in your fingers. It is clear that Durban Poison genetics have taken hold in how this plant looks. You probably won’t see the purple coloring associated with GDP. Instead, you will see the orange hairs and forest green leaves associated with Durban Poison.

In general, once you have Cherry Pie seeds, it is best to focus on growing your plants indoors. If you choose to ignore this advice and elect to grow this strain outside, it needs a warm, Mediterranean climate with a ton of sunshine. Outdoor grown Cherry Pie will be ready for harvest towards the end of October, and it yields 14 ounces of bud per plant on average. 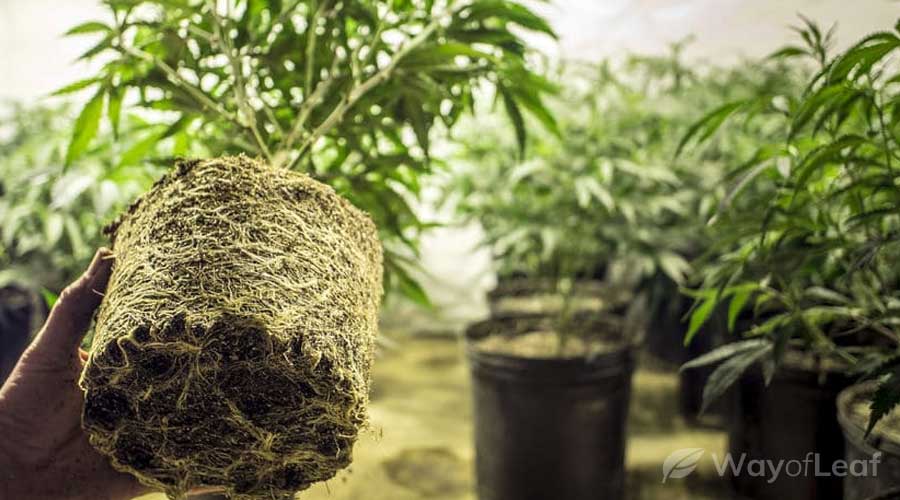 If you grow this strain inside, keep the daytime temperature between 70- and 80-degrees Fahrenheit. While it is tempting to use a hydroponics setup, Cherry Pie flourishes when you use soil. Look for loam potting soil and consider adding soil amendments such as worm castings and bat guano to improve the quality of the soil.

As far as relative humidity (RH) is concerned, Cherry Pie grows best when it is on the lower end of the scale. Keep it to around 55% during the vegetative stage and drop it into the 40s when your flowers are in bloom. Towards harvest time, the RH should be no higher than 40%.

Cherry Pie is a strain that needs a reasonable degree of pruning. It grows to be a medium-sized plant but is also capable of growing to be quite bushy. When you see your crop begin to grow out, start shearing any dying leaves you see. It is best to only prune a small amount of each plant at a time. If you trim too much, too soon, you could cause your plants to go into shock. This will slow down growth, and increase the risk of a hermaphrodite plant growing.

Finally, make sure you ‘flush’ your plants to get rid of nutrient traces. The last thing you need is the taste of nitrogen when smoking your weed! Use pH neutral water around 7-14 days before harvest, and flush the soil. Your plants will use up any nutrient reserves left, and there is no fear of that less than pleasant fertilizer taste.

You are likely to find that there is quite a difference between the strongest and weakest Cherry Pie cannabis. Some mild cuts have a THC content as low as 13%. However, stronger versions have up to 23% THC.

Cherry Pie is not known for having much in the way of CBD. Its CBD content tends to range between 0.04% and 0.2%.

What Can I Expect When I Use Cherry Pie?

If you are expecting a strong body high because it is an indica dominant hybrid, prepare to be surprised yet again. Users often report feeling a surge of energy almost immediately after having a hit. Your thoughts may begin to race as your mind’s machinations go into overdrive. Soon enough, you may find yourself becoming more talkative; this could be the evening when you decide to discuss real-world events such as politics and the meaning of life! 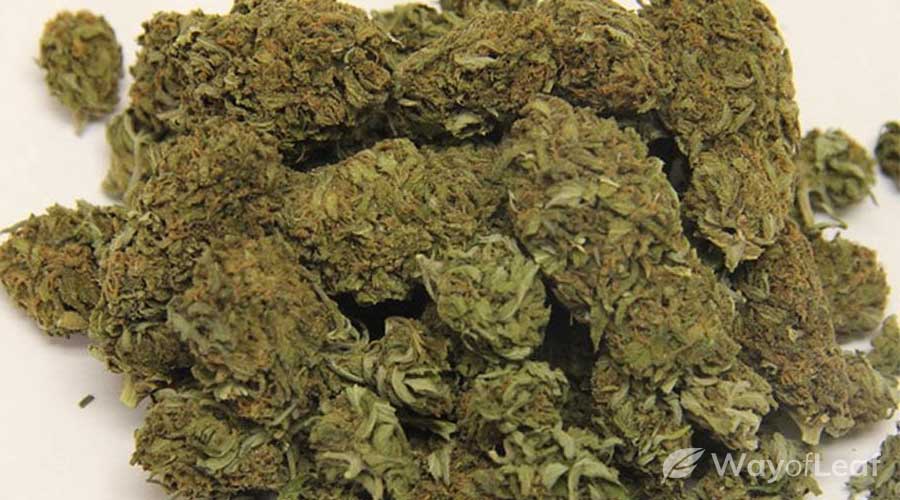 In general, Cherry Pie helps awaken those feelings of happiness that lurk deep within. As well as feeling relaxed, you could find yourself in a blissful state of euphoria. Rather than slowing you down and causing you to feel tired, Cherry Pie will put a pep in your step, and induce creativity. It is an excellent social strain, and not one we would advise you to use before bedtime.

While Cherry Pie can help melt away the stress of the day, it is not one for insomniacs. If you suffer from symptoms related to stress and anxiety, it may be worth considering this strain. Its apparent ability to elevate one’s mood is a prime reason why it is often prescribed to individuals suffering from depression. 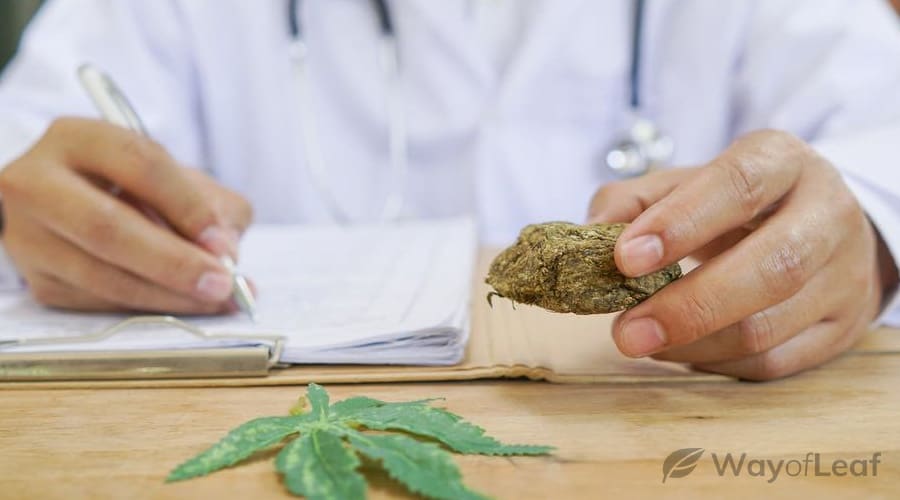 Cherry Pie isn’t the most potent strain around, but it is also prescribed to help treat issues such as headaches, migraines, muscle tension, and PMS. This strain is occasionally associated with an increase in appetite. Therefore, patients suffering from low appetite as a result of a variety of different medical conditions may find this strain useful.

Possible Side Effects of Cherry Pie

The most common side effects include dry mouth, dry eyes, dizziness, and anxiety. There is also a possibility that you’ll feel dehydrated, so it is a good idea to have a large glass of water to sip before, during, and after using this strain. In rare instances, Cherry Pie could increase feelings of paranoia, or cause a mild headache.

For a long time, Cherry Pie was perceived as a well-kept secret amongst marijuana users in America’s West Coast. Travelers to California soon discovered this marvelous strain and began bringing it to the rest of the U.S. While it isn’t the strongest strain around, you shouldn’t underestimate Cherry Pie’s potency.

While it isn’t the strongest strain around, you shouldn’t underestimate Cherry Pie’s potency.

Users claim to feel euphoric and energetic when using this strain, and it doesn’t provide the body high one might expect. It is best to grow Cherry Pie indoors, where you can keep the climate under control.