Indoor growing has changed the face of marijuana cultivation. It is now possible to grow weed at any time of the year in an indoor setup. You can use lights to mimic the sun’s effect and provide ample nutrients to help your crop grow. Thanks to auto-flowering strains, you can even enjoy the fruits of several bountiful harvests each year.

However, we have grown cannabis naturally outdoors for thousands of years. Outdoor-grown weed isn’t as aesthetically pleasing as its indoor counterpart. Also, you can only grow it once a year.

However, it is a less expensive method (if you have land). In addition, your plants benefit from the full spectrum of the sun’s light. This is a form of light that is tough to replicate with a typical indoor lighting setup.

Your plants should begin flowering in late summer. It is ready for harvest in the fall, usually between late September and late October, depending on the strain. As it happens, marijuana cultivation is a four-season endeavor. You germinate the seeds and plant seedlings in spring and watch as your plants flourish in the summer. Then you harvest in the fall, and trim, cure, and dry the buds in winter.

In locations where outdoor growing is prevalent, there is usually a surplus of fresh flowers in the weeks after an annual harvest. This is typically the best time to purchase weed because supply outstrips demand. By the end of winter and in early spring, consumers want more marijuana. Demand exceeds the supply by the middle of the year. Prices rise to reflect the relative scarcity of cannabis.

In this article, we’re going to look at the cannabis growing season and whether different strains have different seasons.

Cannabis’ Growing Season – It Is Different Around the World

In the introduction, we said that harvest time occurs in September or October. This is the case in the Northern Hemisphere. However, it is essential to remember that the seasons are reversed in the Southern Hemisphere. Therefore, while American growers are planting seeds in March, Australian cultivators are getting ready to harvest at the same time.

You can force your plants into the flowering stage by exposing them to 12 hours of continuous darkness per day for a couple of weeks indoors. Outdoor growers must rely on their area’s natural climate to help push their weed into flowering.

Once again, your location dictates when this happens. A marijuana strain that enters the flowering stage at the beginning of July in Colorado won’t flower for at least another month in Amsterdam. If you live in Hawaii, your strain could flower at any time.

The other thing about the location is that different regions have varied environmental conditions. Factors such as rainfall, temperature, and altitude heavily influence cannabis growth. If you live in an area with a mild climate, your plants will probably mature faster than if you live somewhere that is excessively hot or cold.

Not All Marijuana Strains Mature at the Same Time

If you plant ten different marijuana strains at the same time and expect them to flower and be ready for harvest together, you face disappointment. The genetics of the strain you choose plays a significant role in when they ripen. This is because each strain has adapted to its natural habitat over hundreds, or even thousands, of years.

Strains with predominantly indica genetics will flower faster and grow shorter than sativas.

Overall, sativas from regions near the equator have the longest flowering time of all. If you try to develop one of these strains too far north or south, they will die long before harvest time. Meanwhile, if you take a strain out of its natural coastal region and grow it in a warmer midlands area, it will probably flower faster.

In the modern era, breeders have found various means of growing weed faster than ever before. Even so, first-time growers should be aware of strains such as Colombian Gold, Dr. Grinspoon, San Francisco Valley OG, and Chocolate Thai.

All of them are notoriously difficult to grow. Chocolate Thai, for example, is a Southeast Asian landrace strain that takes up to 14 weeks to flower!

DJ Short illustrates the difference between indica and sativa harvest times. He is the man responsible for creating the famous indica strain, Blueberry. He harvests his famous strain in October but waits for another month or two to collect specific sativa strains.

How Much of an Impact Do Cultivation Techniques Have on the Growth of Marijuana?

The art of marijuana cultivation has evolved quickly in the last few years. Just 25 years ago, there wasn’t a single U.S. state that had legalized medical marijuana. Fast forward to today, and there are 33 states (plus D.C.) that have legalized the herb for medical use. The growing acceptance (and legality) of weed means the industry has enjoyed exceptional growth. With higher demand came a need to improve cultivation techniques. 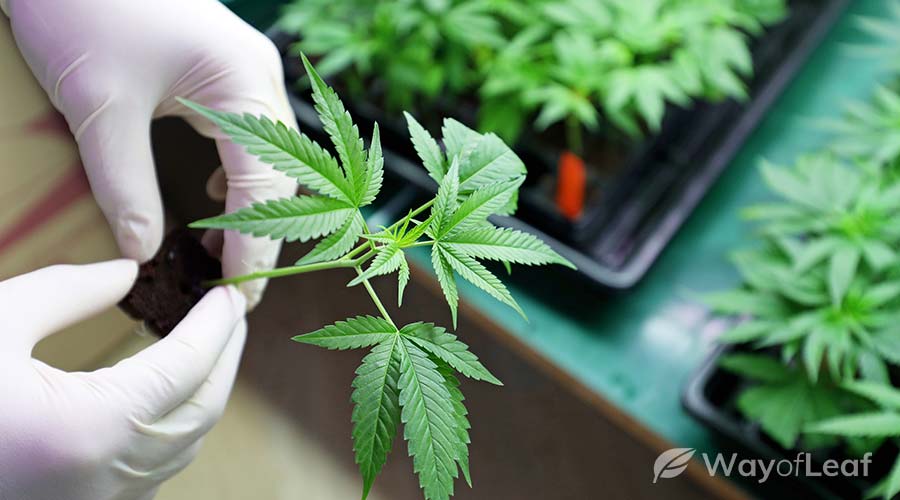 These techniques impact the timing of the marijuana growing season. Those who still grow cannabis illegally wait until as late as possible. They know they’ll end up with smaller plants that are easier to hide.

Then there is the small matter of state-by-state legislation. In California, for example, you are allowed to grow a maximum of six plants, unless you have a commercial license. As a result, residential growers in the Golden State need to find ways to boost the yield of individual plants. Growing weed early in the season allows for additional growth, fatter buds, and more end product.

One of the hardest parts of growing marijuana for newbies is ascertaining the right moment to harvest. If you collect early, the bud should provide a lighter head high. However, the weed is less potent, and the yield is smaller. If you harvest too late, some of the plant’s THC will degrade into CBN. As a consequence, you receive a heavier body high, and some users report feeling nauseous. Obviously, the longer you wait, the more likely it is that pests and diseases will afflict your crop.

There are two methods of determining when to harvest your marijuana. The trichome method involves using a magnifying glass to see if the trichomes on the plants have turned a milky white color.

With the pistil method, you are checking to see the percentage of plant hairs that have transformed from white to a reddish-brown color. For most growers, 70-80% is the ‘ideal’ percentage.

The notion of ‘ripeness’ also seems to vary around the world. If you have ever used weed in Amsterdam, you’ll probably have experienced an unusual high. This is because Dutch growers harvest their marijuana earlier than their North American counterparts.

The larger your cannabis garden, the earlier you need to harvest. If you are growing one strain, all of the plants will become mature at approximately the same time. In extensive gardens, it could take up to a week to harvest every plant. If you harvest ‘on time,’ the final plants you collect are potentially too ripe.

Even when you have harvested your crop, there is still a lot of work to do. Some growers like to trim the leaves from the plants while they are still wet. Others want to wait until the plants are dry before getting rid of leaves. You can dry your weed by hanging it upside down in a climate-controlled room. If you dry the flowers too quickly, the result is a bitter flavor. If you dry too slowly, you risk mold growth, and the bud won’t burn properly.

Did you know that the entire harvesting, trimming, drying, and curing process should take at least six weeks?

This is what happens when a seller is providing consumers with premium-grade marijuana. Alas, too many commercial and residential growers are impatient and try to consume or sell the product within ten days of harvest.

The drying and curing process plays a vital role in the aroma, taste, and potency of weed. Keeping a bud’s terpene and cannabinoid content high is a tricky business. You’ll know that you have purchased high-quality bud if it provides a smooth smoke, and a satisfying high.

Therefore, if your locality’s harvest season is mid-October, you should wait for marijuana that becomes available for sale in December and January.

As a Consumer, Should I Care About Cannabis’ Seasons?

Yes and no. It depends on whether you are consuming weed that’s grown outdoors or indoors. If it is the former, then yes, you should care about the seasons when you purchase marijuana. The best bud takes time to dry and cure. This means it isn’t always a good idea to buy weed directly after harvest.

However, commercial growers that operate on a smaller scale could spend months trimming their weed. Marijuana remains fresh for up to 12 months when stored in black UV glass jars in a cool and dry space. As a result, you could smoke weed that was stored for eight months and not even know it.

Now, it is possible to grow potent cannabis in a basic grow room. You can also produce several batches per year. Those who use greenhouses benefit from the power of the sun while protecting their plants from cold and wet weather.

If you have a large enough indoor area, you can stagger growth using a hydroponic system. You could get a fresh harvest every few weeks! This process allows commercial growers to sell new cannabis virtually every day of the year! Your dispensary should never run out in a legal state, in theory.

At one time, you could only get the best cannabis a few weeks after harvest when it was meticulously dried and cured. Today, innovations such as hydroponics allow growers to develop potent and gorgeous weed 12 months of the year. Yet marijuana connoisseurs will tell you that nothing beats the cannabis that is grown outdoors in the summer and harvested in fall, dried, and cured over eight weeks.

Everything you need to grow this unusual strain

Grow one of nature's original strains

Top tips for a speedy harvest

A Quick Guide to Growing One Marijuana Plant (Just for Fun!)

A beginner’s guide to cannabis cultivation