An increasing number of THC and CBD users are switching to vaporizers. The suggestion is that vaping is less harmful than smoking. This is because the vaping process doesn’t release as many carcinogens as smoking. Vaping doesn’t combust the material, which leads to a reduced level of chemicals being released.

Vape juice requires a thinning agent. Otherwise, the liquid will get clogged up in a vaporizer. The most popular thinning agents are medium-chain triglyceride (MCT) oil, propylene glycol (PG), and vegetable glycerin (VG). This article compares the three and outlines why MCT oil is the best option.

Vegetable glycerin is a natural chemical taken from vegetable oils. Manufacturers use it as a thinning agent because it has a mild and sweet taste and no odor. VG is widely used in the cosmetics, food, and pharmaceutical industries. For example, you can add it to foods to ensure water and oil-based ingredients mix. VG can also moisten or sweeten the final product.

Proponents of VG say the throat hit is smoother than that of PG.

This thinning agent is much thicker than PG, so it is popular amongst those who prefer sub-ohm vaping. Proponents of VG also say the throat hit is smoother. However, it is worth noting that liquid with a high percentage of VG could clog up vaporizers. Such liquid could also increase the risk of dehydration. Typically, vape juice creators tend to mix VG and PG to decrease the thickness of the e-liquid.

Is VG Safe to Vape?

Vegetable glycerin is classified as safe to eat, drink, or apply to the skin. There is even a suggestion that it has certain benefits. However, glycerin is a form of sugar alcohol that the body doesn’t properly absorb. As a result, overconsumption could result in gas, diarrhea, and other side effects. 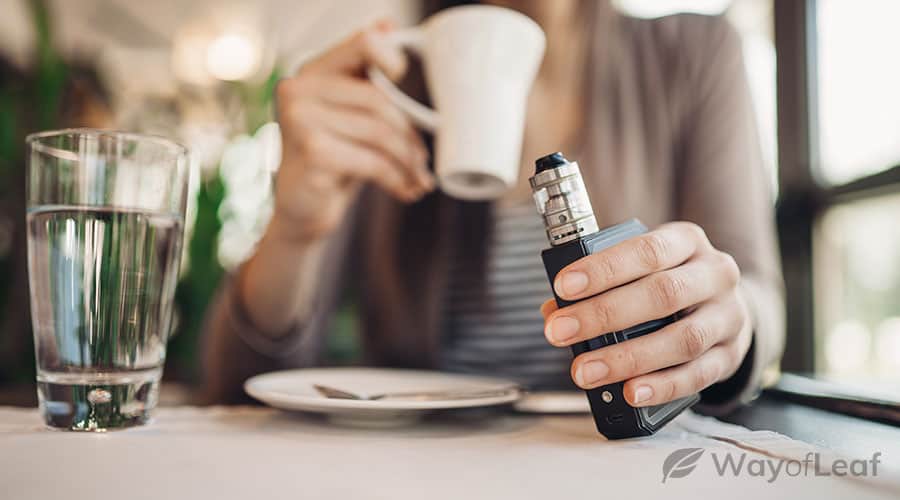 However, just because VG is safe in certain capacities doesn’t mean it is completely safe to vape. When it is heated, there is a chance that it could cause harm to the body. As VG is relatively thick, a vape device user must increase the temperature to vaporize it properly. This process may elevate the risk of releasing carcinogenic by-products.

A study published in Cancer Prevention Research in 2020 looked at the effects of e-cigarettes on the human lung. The research team found that using e-cigarettes with e-liquid containing a mix of VG and PG could result in lung inflammation in the long-term.

In the trial, volunteers used e-cigarettes twice a day for a month. The researchers found that the vapers had higher levels of PG and other chemicals in their blood at the end of the trial period. This had an association with inflammatory changes in the lungs. For the record, the e-cigarette refills had a 50/50 mixture of VG and PG.

However, there is a possibility that PG is the chemical that’s responsible for many of these ill effects.

Propylene glycol is a by-product of petroleum. It is another popular thinning agent due to its lack of color or smell. It is also less thick than VG, making it ideal for thinning e-liquid. PG seems to provide a more robust throat hit and stronger flavor than VG. As a result, manufacturers of products such as nicotine fluid and flavor concentrates choose propylene glycol.

However, the stronger throat hit could be irritating. There are also a few reports of PG causing an allergic reaction in users. If you use it and develop a rash or another adverse reaction, you should switch to a product with a high-VG or MCT thinning agent. Milder side effects include a dry mouth and increased thirst.

You will also find PG in household items such as dog food, beauty products, and toothpaste.

Is PG Safe to Vape?

The FDA has recognized it as being safe for use as a food additive. A study from 1972 claimed that PG was safe to ingest orally. Another study, this time from 1947, wrote that PG was ‘completely harmless.’ As you can see, the fact that the limited research into PG’s safety for human consumption is so dated is a real issue.

Even if it is safe as a food additive, it doesn’t mean PG is also okay for use in vape juice. Indeed, research to date, which is much more recent than the above, paints a troubling picture.

A study published in PLoS One in 2010 looked at a mixture of PG and glycol ethers. It found that this combination potentially increased the risk of respiratory and immune issues in children. These problems included hay fever, eczema, and asthma. At the time, the study suggested that the glycol ethers were responsible.

A far more concerning study was published in the Journal of Alternative and Complementary Medicine in 2017. It analyzed four commonly used thinning agents: MCT, VG, PG, and PEG 400. The researchers heated all four to a temperature of 446 degrees Fahrenheit (230 degrees Celsius). Then they tested the vapors for formaldehyde, acrolein, and acetaldehyde. All are known carcinogens.

Overall, the researchers found that PEG 400 and PG produced extremely high levels of formaldehyde and acetaldehyde. In contrast, VG and MCT produced relatively little of any of the harmful chemicals.

What Is MCT Oil?

Medium-chain triglycerides is another substance without color or smell. It is made from palm oil and coconut oil. It has recently become a popular thinning agent in vape juice. Companies also use MCT as a carrier to help improve the bioavailability of CBD.

In general, MCT oil is associated with various health benefits. Unlike other fats, they go directly from the gut to the liver. At this point, they are used as an energy source or turned into ketones. Ketones are produced when the liver breaks down a significant amount of fat. The brain can use them for energy instead of glucose or sugar.

Is MCT Safe to Vape?

Evidence to date suggests that it is the safest thinning agent option. The Journal of Alternative and Complementary Medicine study found that it didn’t produce many of the tested carcinogens.

However, in March 2020, the Colorado Department of Public Health and Environment banned MCT oil in marijuana vape products. The suggestion is that MCT oil was one of the main culprits in the vaping illness epidemic of 2019 and 2020.

Dozens of people died from a vaping-related illness, and thousands more were hospitalized. Most people affected by the epidemic purchased fake vape cartridges. The decision made by Colorado lawmakers came despite a relative lack of evidence of MCT oil being a chief contributor to the epidemic.

Related article
The Dangers of Vaping with a CBD Oil Pen

A study published in Toxics in 2020 analyzed vaping cartridges recovered from patients with a pulmonary injury. Although there was MCT oil in numerous cartridges, the researchers identified vitamin E acetate as the most likely problematic ingredient.

Some physicians have gone on record as saying that MCT oil can cause lipid pneumonia. It is a condition caused by fat particles entering the lungs. At present, the evidence clearly linking MCT oil with this condition isn’t concrete or plentiful.

In general, research into vaping, and the ingredients of vape juice, is ongoing. Evidence to date suggests that propylene glycol is the most harmful of the three options mentioned in the article. When heated to a high enough temperature, PG releases carcinogenic substances that vapers inhale.

We need to learn more about the vaping process itself, as much as the ingredients in e-liquids.

Studies into the safety of VG are inconclusive. It may cause inflammation in the lungs, although the issue could relate to a different substance. Some say MCT oil is the safest thinning agent. However, it may increase the risk of lipid pneumonia. In truth, we need to learn more about the vaping process itself, as much as the ingredients in e-liquids. Users are advised to vape responsibly and take note of any side effects.