Practically everyone reading this article has likely eaten frozen food at some point in the last few days. Even some of the food you consume in restaurants was frozen before it made its way to your plate! Clarence Birdseye is accredited with inventing the quick-freezing method in 1924. Frozen food is incredibly convenient, and the process of freezing enables us to cook large batches of meals and keep them preserved for weeks, even months.

The cannabis industry has recently discovered the joys and benefits of fresh frozen marijuana. There are plenty of home growers who like to freeze their weed. In theory, your frosted bud should retain most of its quality. However, in the commercial marijuana growing sector, they freeze their harvest to create high-THC resin with beautiful aromas.

As medical marijuana is legal in individual states rather than federally, there is a mish-mash of laws and regulations. There is also a significant difference in the supply vs. demand situation across the country. Much of it has to do with the number of dispensaries allowed.

Illinois legalized recreational marijuana in June 2019. However, the state will have fewer than 200 dispensaries by May 2020. This equates to an open dispensary for every 67,000 residents! For reference, Oregon’s dispensary to population ratio is ten times higher!

While this is excellent news for weed lovers in Oregon, the state has problems of its own. Growers are cultivating so much herb that supply significantly outstrips demand. Companies in California face the same issues. If they are unable to sell their supply, they need to find a way to store it in the long-term. Yes, properly cured and dried herb can last for up to 18 months when stored in a cool, dry place away from sunlight.

There is another solution. One that also allows innovative companies to produce exceptionally high-THC live resin and rosin. Fresh frozen marijuana enables them to keep their harvests safe and provide a premium-quality product in the bargain. In California, for example, an increasing number of growers freeze their entire harvest!

All it takes is a hell of a lot of dry ice or a few industrial freezers! Cultivation companies now realize that fresh frozen cannabis saves them time, money, and risk. They have abandoned the once-essential post-harvest process and embrace a new way to store weed. 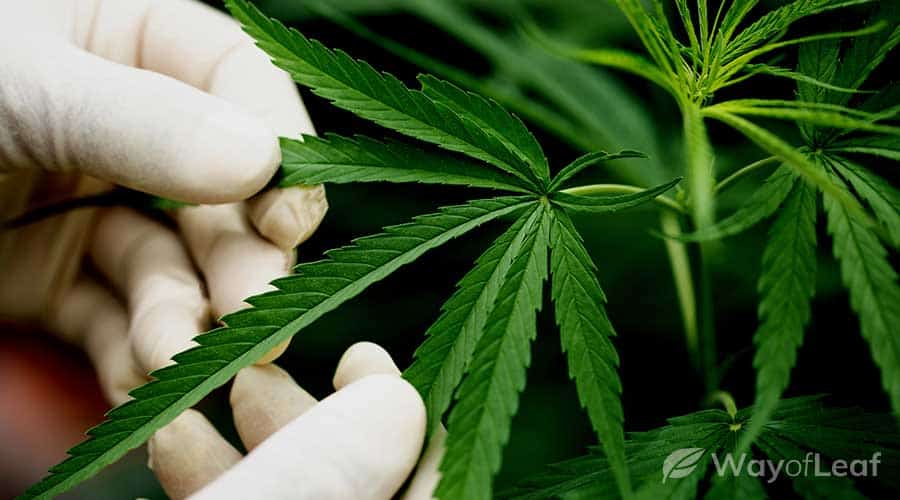 As you can probably tell, fresh frozen weed is cryogenically frozen cannabis. Companies freeze the herb immediately after harvest to ensure the complete preservation of terpenes. Fresh frozen marijuana is also a term for a hashish product created using nothing but frozen trim and bud. When you get to work immediately after harvest, you don’t end up with crumbly pot like you would when you dry and cure it first.

If you have ever grown and harvested cannabis, you know the traditional process. Once enough pistils have changed color, or the trichomes are white with mushroom heads, you cut down the weed as it is at, or close to, peak THC levels. The next step involves drying the buds for several days and curing them in jars. It can take months of curing to produce the best smelling and tasting herb.

The drying and curing process is as tricky as it is necessary. You face a constant battle to ensure the temperature and humidity of the storage rooms are at ideal levels. A failure to continually monitor your herb could result in excessively dry, or moldy, marijuana. Losing bud that you grew for months to mold is infuriating, to say the least. If only there were a better way?

The beauty of fresh frozen marijuana is that you don’t have to go through any of the time-consuming processes of drying and curing. Instead, farmers cut down their plants, remove the stems, branches, and leaves, and vacuum seal the rest. They can easily preserve several pounds of herb in each bag.

The next step involves placing the bags in a massive freezer at a temperature of -38 degrees Fahrenheit. At such a low temperature, virtually all of the plant’s cannabinoids, flavors, and terpenes remain locked in, along with the water.

Speed is of the essence, however. Farmers mustn’t allow the buds to remain out for more than 60 minutes. If over two hours pass from cutting down the plant to placing it in the freezer, the herb begins to lose monoterpenes. The loss of specific terpenes starts to occur within four hours of cutting. When this happens, you wave goodbye to the authentic taste of live resin.

If the goal is to create live resin, the next step is to grind the frozen buds into a fine powder finely. Then, the company places the ground herb into a machine and uses butane hash oil (BHO) extraction using a closed-loop process. This pulls out all of the cannabinoids and terpenes and could contain up to 90% of a cannabinoid, such as THC or CBD, in some cases.

Now that the technician has golden brown liquid to work with, they remove the solvent by heating the mixture as much as possible. Aside from the cannabinoids, the liquid contains a variety of terpenes, which provide the flavor and scent of the product. The company then sells the end product, live resin, to users intent on experiencing the potency of concentrates.

You can use live resin to dab, or insert some in a vaporizer. Called the ‘champagne of concentrates,’ live resin offers an incredible array of flavors. However, it has the bonus of not stinking up a room like smoked cannabis! Therefore, you can enjoy a quick dab or vape at home without attracting unwanted attention.

The fact that marijuana was unilaterally prohibited around the world means that it took a long time to make discoveries such as fresh frozen marijuana. Fortunately, we have finally uncovered the benefits of freezing weed. One of the most important aspects of it is the fact that cannabinoids suffer hardly any degradation. When you store the freshly cut cannabis in a freezer, you also retain terpenes lost to drying and curing.

Although fresh frozen marijuana works perfectly for live resin, it is also spawning a new range of products. Manufacturers use it to make items such as THC-infused beverages, edibles, oils, and balms. Some companies create oil, better known as a distillate, from their frozen harvests.

These days, there is ample room for flower that isn’t aesthetically pleasing. If your weed looks terrible but has plenty of terpenes and cannabinoids, it is a good option for the freezer. While the highest-grade herb still goes through the curing and drying process, farmers can now make use of their slightly lower-grade harvests.

There is also a burgeoning live rosin market that involves fresh frozen cannabis, which does not include the use of a solvent.

It is a rapidly growing market as farmers now understand the many benefits of freezing their weed as soon as possible after harvest. We do not recommend trying to create live resin at home because the use of a solvent makes it a dangerous process. Instead, you can try to make live rosin because it doesn’t involve hazardous ingredients such as butane.

There are several factors to consider when you decide to shop for live resin. First and foremost, make sure it has a color that ranges from deep amber to gold. High-quality resin also has a delicate balance of liquid (terpenes) and crystals (THC).

Bear in mind that marijuana strains have varying terpene concentrations. For example, Sour Diesel contains a significant proportion of beta-caryophyllene, limonene, and myrcene. When in doubt about reputable brands, always opt for companies that include third-party lab reports.

Once you buy live resin, there is a multitude of ways to enjoy it. The most common is the use of a dab rig. If you go down this route, look for a rig with a quartz or glass nail for better flavor and temperature control. If you use a metal nail, you could burn away the precious terpenes that the farmers tried so hard to preserve.

Also, if you use live resin created from fresh frozen marijuana, use it sensibly! It is incredibly potent with a THC level far beyond what you would find in cannabis flower.

The future of the cannabis industry

Cannabis Laws in North Korea: They Will Definitely Blow Your Mind

Five of the Best Discreet Weed Vape Pens Ever

These products are awesome