Some might think of cannabis only as a medicinal and recreational substance. However, did you know that cannabis also has a long and varied history as a spiritual herb?

Cannabis has been a key component in the rituals and ceremonies of religions spanning the globe for several thousand years. Its spiritual characteristics have been recognized by societies ranging from ancient Chinese Taoists to modern-day Rastafarians.

This article will explore the spiritual history of cannabis and look at its religious uses in the modern world.

Cannabis as a Spiritual Herb

The many spiritual uses of marijuana are no doubt related to its intoxicating compound Δ9-tetrahydrocannabinol (THC). When consumed, this chemical causes several physiological and psychological effects, including relaxation, euphoria, and a sense of general well-being.

Some people believe that regular cannabis use will help them achieve spiritual enlightenment.

Since the third millennium BC, various civilizations have utilized these properties to aid rituals, ceremonies, and meditation. To this day, the more spiritually aware among us have taken advantage of these effects. Some even believe that regular cannabis use will help them achieve spiritual enlightenment.

Some of the earliest evidence of marijuana as a sacred herb dates back to ancient China. However, this evidence did not come to light until around 20 years ago when farmers discovered the mummified remains of a man in the area now known as Xinjiang in western China.

The man was well dressed and obviously of high social status. Along with his body, the farmers found other items, including a harp and archery equipment. As he was buried with these items, historians believe that he must have been a shaman. Also among his possessions was a large amount of marijuana – 789 g to be exact!

Radiocarbon dating placed the remains at 2700 years old. Despite this, the plant matter was preserved incredibly well. As a result, scientists were able to positively identify it as cannabis and confirm the presence of THC in its leaves. Researchers believe that, in this case, the herb was probably used for its intoxicating properties, possibly to aid divination or other shamanistic rituals.

The curious thing about this man is that, although his remains were found in China, he was actually of Caucasian ethnicity. It is unclear exactly who this man was or how he came to be there. It seems most likely that he came from a nomadic Indo-European tribe known as the Gushi.

Cannabis Use in Ancient and Modern-Day China

The Gushi were not the only people using cannabis in China at that time. By the first to second century AD, marijuana had already been listed as a medicinal herb in the Divine Farmer’s Classic of Materia Medica. In this ancient text, the author describes marijuana as having many different medicinal uses. The author also states that it can cause one to see ghosts and that “prolonged consumption frees the spirit light and lightens the body.”

This statement is almost certainly a reference to the plant’s psychoactive properties. The authors of the 16th-century text Compendium of Materia Medica make a similar claim in their work. They recommend cannabis for people “seeking to see ghosts.”

Related article
Exploring the Use of Marijuana in Chinese Medicine

Exploring how cannabis has imp…

There is also a link between cannabis use and Taoism, an ancient Chinese spiritual practice based on the teachings of the Tao Te Ching. The word tao means “the way” in Chinese. The Taoists would have used cannabis as incense, helping them progress on their spiritual journey beyond the mortal plane.

In modern-day China, cannabis remains an integral part of the Uighur culture. The Uighurs are a predominantly Muslim ethnic minority. They originate from the western provinces but can now be found living all over the country and have a reputation for using hashish.

Just as cannabis use was becoming more common in China, the spiritual use of marijuana was also becoming widespread elsewhere in Asia. This spiritual use of cannabis took place in India, Nepal, Pakistan, and Afghanistan. As it spread across the subcontinent, cannabis began to play a significant role in Hinduism.

There are references to cannabis in the Atharva Veda, an important Hindu text compiled between 1200 and 1000 BC. Here cannabis is listed as one of five sacred plants with medicinal and spiritual properties. Marijuana is often associated with the Hindu god Shiva, who reportedly used the herb to aid his meditations.

Marijuana is still associated with Hinduism today, and there are three types of cannabis preparation commonly used in India. The first is known as bhang, a preparation usually mixed with milk and drunk. The second is Ganga, the flowers and sugar leaves of the female plant, which are smoked. The final preparation is charas, also known as “black gold” or “finger hash.” Charas is a form of resin extracted by rolling almost-mature flower buds slowly between the palms.

Of the three preparations, it is charas which is considered most special, and it often plays a role in festivals such as Holi. People smoke Charas in a pipe called a chillum, sometimes mixed with tobacco.

Cannabis is also often used by Sadhus, holy men who have renounced their material possessions to seek spiritual enlightenment.

Cannabis and the Scythians

The Scythians were people originating from central Asia and the area now known as southern Siberia. They were nomadic warriors, skilled archers, and horsemen but apparently enjoyed nothing more than a good smoke. 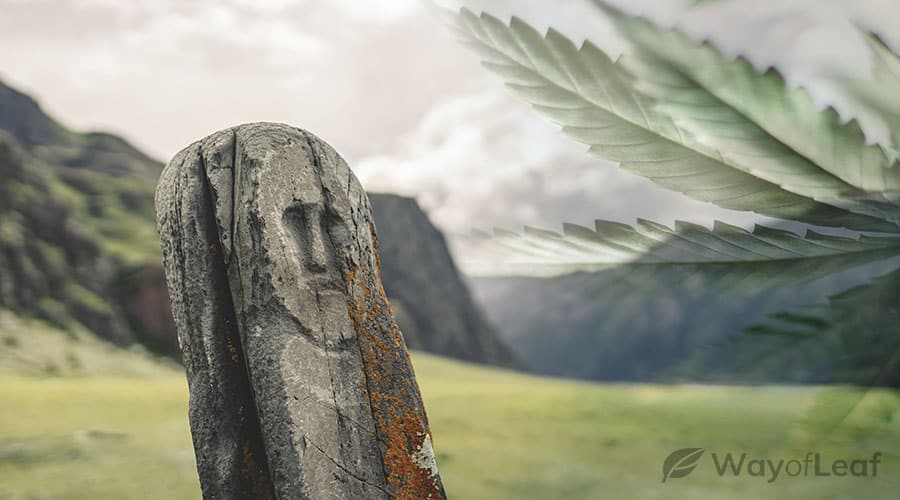 The Greek historian Herodotus wrote about the Scythians’ ingenious use of cannabis. Herodotus wrote that they would construct a temporary structure similar to a tent, throw marijuana onto hot stones underneath, and bathe in the smoke. It is unclear whether they were doing this as a spiritual practice, some form of cleansing, or both. However, the Scythians were said to “howl with joy” as they inhaled the cannabis vapor, suggesting that it was more than just a practical activity.

Other evidence has since been found of the Scythians’ reverence for marijuana, with seeds discovered in leather pouches at their burial sites. Some believe that it may have been the Scythians who first introduced cannabis to Europe.

Little is known about the spiritual use of cannabis in Europe, as Europeans primarily saw it as a medicinal herb. However, it did play a role in Norse paganism, and there is a link to Freya, the goddess of love, beauty, and fertility.

Cannabis in the Middle East

Marijuana was also a popular spiritual herb in the Middle East. It was first associated with the Zoroastrians, an ancient religious group originating in Persia long before the birth of Islam. Cannabis gets a mention in the Zoroastrian sacred text, the Avesta, where the author refers to it as the “good narcotic.”

There have also been reports of the Assyrians using cannabis as incense, with references found in books from as early as the 7th century BC. The Assyrians came from an area encompassing parts of modern-day Iraq, Iran, Turkey, and Syria.

Cannabis is also mentioned in the Jewish Talmud, where it is said to have euphoric properties.

By the 11th century, cannabis use was spreading fast across the Middle East. It was used by Islamic mystics known as Sufi, and there is a reference to it in the famous 1001 Arabian Nights. One of the reasons why marijuana became so popular in this area is the large population of Muslims, who used it to replace alcohol forbidden by Islamic law.

Cannabis in the Bible

Some people believe that cannabis also features heavily in the Bible. They suggest that the Hebrew word kaneh bosm (meaning cannabis) may have originally been mistranslated as calamus. Calamus is another plant that is more closely related to the iris than cannabis.

If this is the case, then cannabis is mentioned several times throughout the Old Testament. References to cannabis are present in the books of Isaiah, Jeremiah, Ezekiel, and the Song of Songs. In Exodus, God even instructs Moses to create a sacred oil using kaneh bosm and other herbs, including myrrh, cassia, and cinnamon leaves mixed together in olive oil.

Cannabis has also been associated with the biblical King Solomon, a man considered to possess great wisdom and knowledge. According to legend, marijuana grew on his grave years after his death.

The religion that is probably most associated with spiritual cannabis use is Rastafarianism, a relatively new religion based on the Old Testament teachings.

Marijuana has become a core element of Rastafarianism due to its interpretation of various passages of the Bible. For example, “eat every herb of the land” is interpreted to mean that all herbs, marijuana included, were put on Earth by God for man to use as he pleases.

Rastafarians believe that cannabis brings them closer to Jah (God), and they smoke it in ceremonies known as “reasonings.” These involve deep meditation, prayer, debates, and discussions with peers. Reasonings are serious affairs, a far cry from the stereotypical image of a Rasta sitting on a beach and listening to reggae with a huge joint hanging out of his mouth.

Final Thoughts on the Spiritual History of Cannabis

Cannabis has been used for many thousands of years by members of different religions across the world. Due to the presence of THC in its leaves and buds, cannabis has psychoactive properties which allow it to bring about a sense of deep relaxation and, for some, spiritual realization.

Whether you use cannabis for religious, recreational, or medicinal purposes, it certainly is an extraordinary herb.

Whether you use cannabis for religious, recreational, or medicinal purposes, it certainly is an extraordinary herb. So next time you light up, why not take a moment to think about the more spiritual side of cannabis and how it has truly stood the test of time.

18 Mind-Boggling Questions to Ask Yourself High as Hell