We all know that donating blood saves lives, but is it okay to give it if you use marijuana? The quick answer to the title question is ‘yes.’ Blood drives will accept a donation from a weed smoker; just make sure you don’t turn up stoned!

With that said, let’s dive into the facts, understand the effects of marijuana on your bloodstream, and whether or not you should donate blood if you’re a weed lover.

It is a sad fact that there isn’t enough blood to go around in the United States. Every two seconds, a resident of this country needs blood. An estimated 4.5 million Americans require a blood transfusion annually.

While 37% of people in the nation are eligible to donate, less than 10% of this select group choose to do so. Overall, approximately 6.8 million of us give blood each year.

It is a relatively simple process that lasts 10-12 minutes. The entire visit takes slightly over an hour, according to the American Red Cross.

This includes the mini-physical, checking your blood pressure, pulse, temperature, and hemoglobin to make sure it is safe for you to donate. Keep reading to see how blood collection groups view weed users and discover the criteria for giving blood.

Do Blood Collection Groups Check You for THC?

America’s Blood Centers confirmed that it does not test your blood for THC. They test it to ensure it doesn’t contain infectious diseases that can be transmitted via transfusion. Its centers don’t turn away weed smokers unless they seem stoned. Another reason to reject a donor is if they use cannabis to treat a condition that precludes them from donating.

The American Red Cross has a similar policy. It doesn’t test for THC and won’t reject you unless you’re clearly under the influence. Of course, you can’t donate if you use illicit substances. However, the American Red Cross doesn’t place marijuana in that category. Here is an official statement: “Legal or illegal use of marijuana is not otherwise a cause for blood donation deferral.”

So, It’s Okay to Have a Smoke Just Before as Long as I Don’t Get Stoned?

Technically, yes. After all, there is no test for THC. However, it is inadvisable for a variety of reasons. 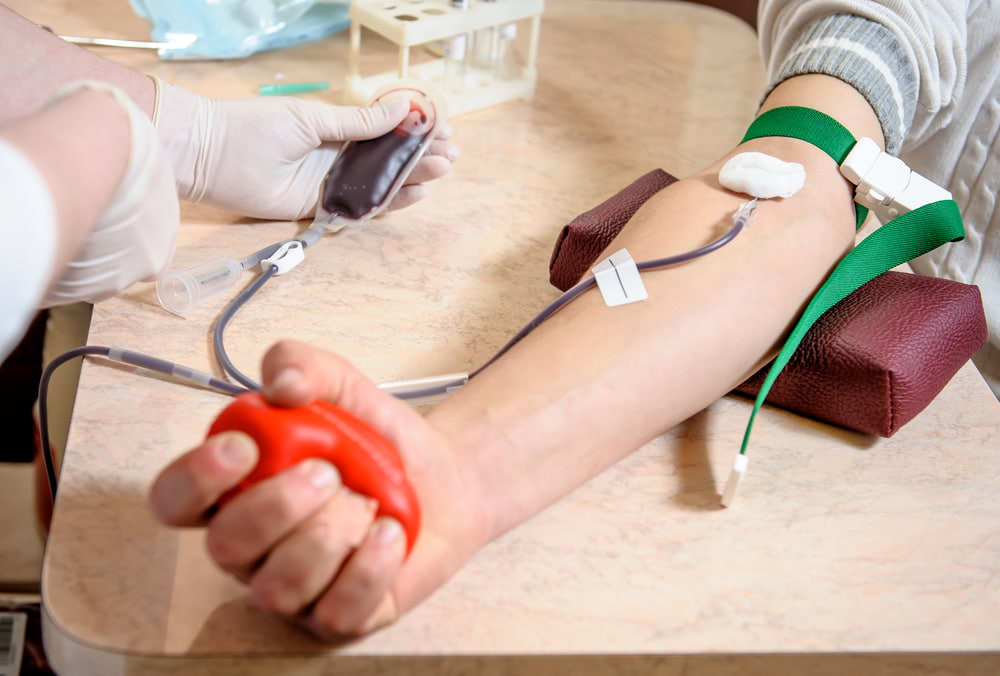 When you smoke weed, your body metabolizes the THC into a pair of different chemicals: 11-OH-THC and 11-nor-9-Carboxy-THC. The former compound is psychoactive like THC, while the latter is not.

Do you notice that your case of the ‘munchies’ is delayed for a little while after smoking? This is probably because the 11-OH-THC causes hunger pangs. It takes the body time to metabolize the THC before the new chemical becomes present in your bloodstream. Soon, the 11-OH-THC starts to turn into 11-nor-9-Carboxy-THC, although the process takes a few hours. When there is no more 11-OH-THC in your system, it means you’re no longer high.

If you notice the wording in statements from groups like the American Red Cross, it says that donors who are ‘unwell’ will be rejected. In their eyes, a visibly stoned individual is ‘unwell’ because their blood still contains some psychoactive chemicals. Yes, you could ‘fool’ the people at the blood drive. However, you’re not doing any favors by donating blood that still contains psychoactive THC.

This is the medical term for low blood pressure. Occasionally, using weed can result in a ‘white-out.’ This involves symptoms such as pale skin, shakiness, loss of balance, dizziness, and even fainting. It is a short-term problem that is usually only dangerous if you fall and hurt yourself. As it transpires, these white-outs occur because of low blood pressure.

You also experience a fall in blood pressure when you donate blood. If you smoke cannabis shortly before donating blood, there is a possibility of a white-out occurring.

What Disqualifies Me from Donating Blood?

Individuals who smoke tobacco cigarettes are also permitted to donate blood. However, they must not smoke before an appointment, as the process can cause an increase in blood pressure. In the United States, potential disqualifiers include, but are not limited to:

The regular use of several prescription drugs may also preclude you from giving blood. These include:

Individuals who have traveled to a nation with a high risk of malaria are generally told to wait a certain length of time.

When Donating Blood, How Long Should I Be ‘Clean’?

If you want to be a good citizen, it is essential to learn when weed leaves your system. Generally speaking, drug tests focus on urine because THC and THC metabolites remain in urine for much longer than in blood. This is because the cannabinoid is seeking a fatty deposit to land on.

If you smoke cannabis irregularly, the THC should leave your bloodstream within 12-24 hours. If you use it frequently, it can take up to three days. It can take weeks for the blood of chronic smokers to become ‘clean.’

What Are the General Blood Donation Criteria?

If you wish to donate blood and platelets to the American Red Cross, there are a few rules to consider. First and foremost, only apply if you are in good general health and ‘feeling well.’ This means no smoking weed immediately beforehand! In most states, the minimum age is 17 years. However, some states allow 16-year-olds to donate if they have parental consent. You also have to weigh at least 110 pounds.

Incidentally, you are allowed to donate:

The Burning Question – Should I Donate Blood Even Though I Smoke Weed?

There is no legal obstacle to becoming a regular blood donor as long as you don’t smoke marijuana immediately before the donation. Cynics will suggest that the blood of a cannabis user is unsuitable for a baby, infant, or toddler. However, it is essential to remember that the psychoactive THC, which could harm the recipient of the blood, will be gone by the time of the donation.

Blood from a generally healthy weed user is far better than blood donated by someone with high cholesterol.

In reality, donating blood is a life-saving activity. Did you know that just one donation could save the lives of up to three people? If it weren’t safe, reputable organizations such as the American Red Cross would expressly forbid blood from marijuana users. In actual fact, the group welcomes such donations.

In summation, if you’re a regular user of cannabis and want to donate, nothing is stopping you! Far from causing harm, you could save lives. However, please refrain from using marijuana for as long as possible before the appointment. For regular users, this could mean several weeks.

Ganja in English: Does It Translate?

More than just another word for weed?

Why Does Weed Give You Crazy Dreams?

The link between cannabis and dreams

The Difference Between Mids and Regs (Fully Explained)

Is top-shelf weed really worth the extra cash?

21
7 min read
Join The Discussion
TOC
Premium
Your subscription has ended
If you love cannabis and want to support our site, join WayofLeaf Premium today and unlock
Best of all, part of your membership fee will go towards supporting the fight to legalize cannabis.
Sign Up for WoL Premium
Not now
I already have an account
×
Log in to Your Premium Account