How Many Grams in an Ounce of Marijuana? [Exact Answer]

Wouldn’t it be nice if a cannabis purchase was straightforward? In states like California and Colorado, where weed is legal for recreational use, it is! All you have to do is buy your Mary Jane like you would a gallon of milk or a loaf of bread. The market is regulated, so sellers will not get away with ripping you off – simply choose your weed, and they have to give you the right amount every time.

The illicit market is a little different, as your local dealer isn’t necessarily going to be a straight shooter. After all, in states where marijuana is against the law, he (or she) is considered a criminal and will be severely punished if caught. So if your half-ounce weed is off by a gram (or five), you can’t exactly make a complaint to the cops!

Admittedly, even in regulated markets, it is helpful to know how much weed you’re buying, whether it be in the form of herb or edibles. When you can purchase the correct amount, you can curate a collection of edibles, strains, and other products. In this instance, it makes perfect sense to purchase a weed scale to take the guesswork out of the equation.

If you want accurate weed measurements, a scale is an essential purchase. Unless you’re a vastly experienced user who can tell what 1 gram of weed looks like with the naked eye, a drug scale of this nature will ensure you always get what you pay for. It also enables you to determine how much you’re using per session. 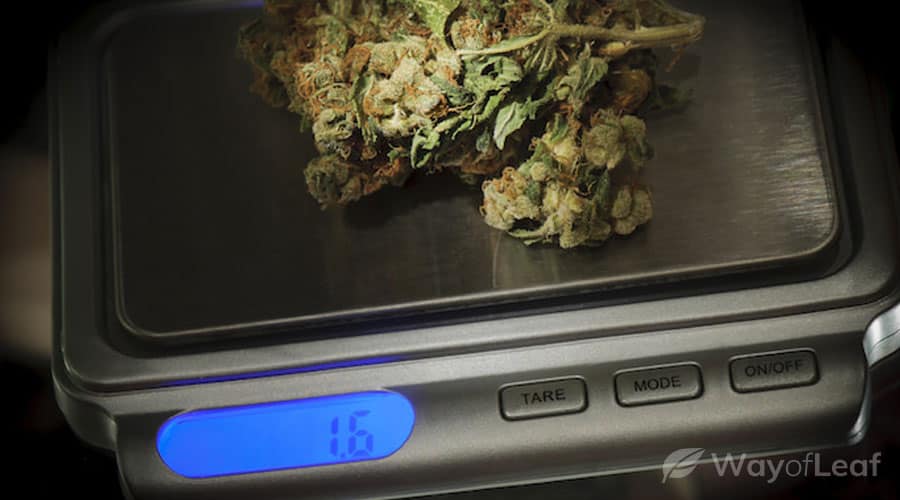 There’s another excellent reason to invest in a weed scale; even in states where recreational and medical use is allowed, there are limits on how much you can buy or sell. In Alaska, for example, you can purchase one ounce of marijuana per transaction. A scale could be the difference between a nice, easy purchase, and a serious fine!

When buying a scale, here are a few things to consider:

We have regularly found scales available for less than $10, so there is no need to go crazy and purchase a top-of-the-line model that you don’t need. If nothing else, a nice scale is a sound investment that takes most of the guessing work out of buying weed and having to convert from oz to g, g to oz, and so on. Buying an ounce of weed becomes a breeze – not a dreaded chore.

It’s no secret that a gram of weed belonging to one strain might look very different from the same amount of another strain. The fact is, some nugs are more compact and dense, while others are loose and fluffy. So a gram of the latter will look significantly larger than the same amount of the former. This can make things kind of difficult (if not impossible) when crunch time comes around and you’re attempting to convert grams to ounces by the sheer skill of your naked eye.

Then, you have to, of course, consider things like the level of moisture in the bud, and the fact that it is possible for a strain to come in one large nug, or several smaller ones. The fact is, the “eye test” is almost certain to be inaccurate, no matter how experienced you are.

If for some reason you don’t want to spend a small sum of money on something that will help you a LOT, never fear! We have uncovered a variety of MacGyver-esque methods to weigh your cannabis without a scale (don’t use kitchen scales though because they are nowhere near accurate enough).

While these following techniques are fun to try and can help you out in a pinch, though, it’s worth reiterating that they are no substitute for the best weed scales on the market, which will make an exact science out of your attempt to convert ounces to grams, or when you’re desperately trying to remember (through a stony haze) how many grams are in an ounce.

The Ruler & The Penny

This is a pretty simple technique that only requires a ruler and a 1982 penny. Use the ruler as a scale by balancing it on something, and place a penny on one side, and your weed on the other. Since the penny weighs exactly 2.5 grams, you’ll know you have that amount when the ruler is perfectly balanced.

Also, it’s worth pointing out that when using “streetwise” techniques like this, it pays to have all of your conversions memorized. No matter their level of “academic achievement,” most any self-respecting dealer will be able to tell you off the top of his or her head how many grams in an ounce, how to convert 1 oz to grams, or even how many grams in a kilogram.

All you need here is a plastic hanger, a long piece of string, a drill, and a pair of scissors (although a ruler will come in handy as well). Also, you need a nickel as it weighs five grams (substantially less than 1/4 oz)  and acts as a convenient counterweight.

If you have a relatively new smartphone, there are a few different options for “Weed Scale” apps or something else of the sort that can work fairly efficiently (there’s actually one in the Android Play Store called “Weed Weight”). Please note, though, that such apps are not totally reliable, and a typical scale is still the best option.

Grams to Ounces – Or Maybe You Mean How Many Grams in an Ounce?

Let’s go ahead and get to the point of the article, which is to determine how much an ounce of weed is in terms of grams. Regardless of whether a nation uses the imperial or metric system, grams, ounces, and pounds have been the universal weed measurement for a very long time. The traditional method has always stuck around when it comes to weed. Dealers have used this to their advantage because purchasers always ask for ounces, quarters, and eighths, a lot of times without even really realizing how many are in each. 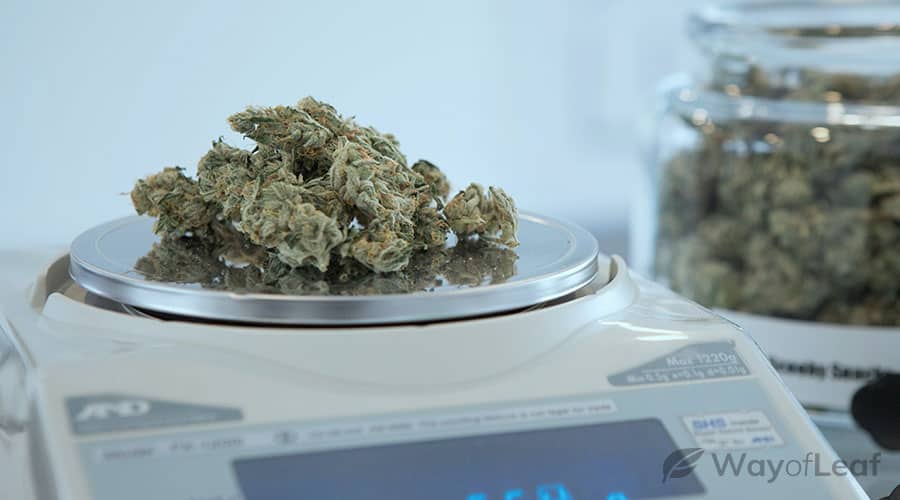 Did you know, for example, that 1/8 of an ounce is exactly 3.5437 grams, but dealers tend to round it down to 3.5 grams? Admittedly, that 0.04-gram sliver of weed won’t be missed, but it adds up over time if you’re a heavy user. Think of all the thousands of pounds of pot that have been “rounded down” over the years by wry little small-time dealers!

Also, they’ll do the exact same thing when converting ounce to gram, grams to ounces, and so on.

Anyway, let’s go ahead and break down the most frequently used weed measurements and convert them into grams for you.

How Many Grams in an Ounce? The Ultimate Weed Conversion Table

To help you easily figure out how many grams are in an ounce of weed (or a quarter, eighth, or pound), we have put together this handy weed conversion table just for you.

Of course, a lot of times when you’re buying weed you’ll hear some pretty strange terms flying around – terms that, for the uninitiated, will carry no meaning whatsoever. Knowing what these terms mean are not necessarily a substitute for memorizing your standard conversions like ounce to grams, but they definitely do help:

Big Players Will Know How Many Grams in a Pound…

So far, we’ve been talking about all the “standard” transactions you’re likely to come across when buying an average amount of weed. But how do all the big players do it when measuring out much larger amounts like pounds and kilograms?

Well, it’s all the same processes and conversions, just on another level. And of course, we by no means recommend you ever purchase more than the legal amounts of the state that you live in. For all realistic purposes, nobody should ever have any reason to be buying pounds or kilos of marijuana at a time.

Moreover, possession amounts in these larger ranges are still taken extremely seriously – even in states with super lenient marijuana laws.

In Colorado, for example, most people don’t realize that it’s still a felony to possess over 12 oz of weed at any one time (unless of course, you’re a dealer).

Thus, for all extents and purposes you should be just fine sticking to your normal amounts of weed and normal conversions; oz to grams, grams to ounces, and so on and so forth.

Now that you know the basic units of measurement, it is easier to explain (and figure out) how much you’re actually smoking when you pack up a bowl or fire up a joint (though that being said, it is practically impossible to quantify how much weed is in the “average” joint, as everyone rolls differently. One very interesting 2011 study by Mariani et al. suggested that the average weight of a joint is 0.66 grams, though the government suggests it is about 0.43 grams).

So let’s make things easy for ourselves and split the difference by using 0.5 grams as the average joint size. If we go by this amount, you can get two joints per gram, seven joints in an eighth ounce, and a magnificent 56 joints in an ounce! In California, the average cost of high-quality weed is about $256 an ounce, so if you can afford to drop that amount, each joint will cost you approximately $4.57 – which is actually not a bad deal!

We hope this guide helped you figure out the weed market a little bit better, and hopefully, it didn’t bring back too many bad memories of high school math class. Happy smoking, friends!

Feel free to use our online Grams, Pounds and Ounces Converter:

How Many Ounces in a Pound? [Know the Exact Answer]

We have the answers right here

Prep for Your Drug Test with Our Online THC Calculator

70
8 min read
Video
Join The Discussion
More comments
TOC
Premium
Your subscription has ended
If you love cannabis and want to support our site, join WayofLeaf Premium today and unlock
Best of all, part of your membership fee will go towards supporting the fight to legalize cannabis.
Sign Up for WoL Premium
Not now
I already have an account
×
Log in to Your Premium Account