CBD Ice Cream: Is There Such a Thing?

Written by Tiannah Pedler, M.A.
6 min read
1 comments
Read Later
Overview
Making CBD ice cream involves three steps; preparing your honey, preparing your ice cream, and freezing & whipping the cream. Firstly, place honey into slow boiler and keep on a low heat. Stir in the CBD powder until it's completely absorbed. Remove from heat. Next, bring the cream, honey and vanilla flavoring to a boil in a heavy saucepan and stir occassionally. Remove from heat and keep mixture covered for about 30 minutes. Once cooled, pour through a sieve and return to a pan on moderate heat. Whisk the eggs and salt together in a separate bowl - and add the hot cream. Place this mixture in a pan and heat on a moderately low flame. Stir constantly for 5 minutes. Then remove from heat and pour through a mesh sieve. Let everything cool and stir occassionally. Cover and chill in the fridge for between 4 - 24 hours. 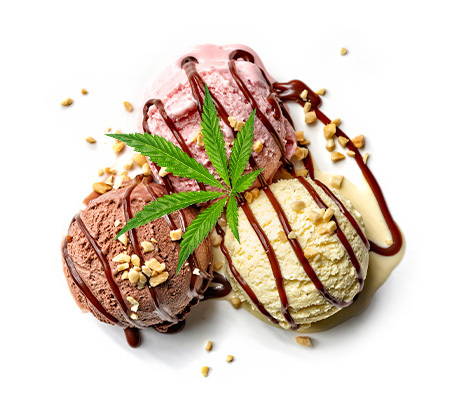 You’ve probably heard that CBD is making a splash in a big way. From lip balms to lotions and even doggie treats, CBD has made a huge cultural impact. There may seem to be CBD in all kinds of things, and those who enjoy these products are getting a heaping dose of healthful benefits.

But it’s not as cut and dried as it may seem. CBD is still a component of cannabis, a substance that until very recently was illegal in many states. As states move to make cannabis legal, there has been little movement on the federal front.

Due to this limitation, major manufacturers of ice cream and other desserts cannot wade in the cool waters of CBD. Just recently, Ben & Jerry’s, the makers of some of the world’s most awesome ice cream, released a statement on their website stating, “It’s no surprise that we can’t wait to get into the latest food trend: cannabidiol, or CBD. We are committed to bringing CBD-infused ice cream to your freezer as soon as it’s legalized at the federal level.”

In fact, earlier this year a Brooklyn based ice cream maker, Van Leeuwen, was hailed by New Yorkers as a premium ice cream outlet with a CBD twist. Some of their flavors came in delectably delicious assortments, including the “Couch Potato,” an explosion of potato chip delight mixed with caramel, vanilla ice cream, chocolate-covered pretzels, and CBD extract.

If you’re not in areas where CBD-infused ice cream is available, you may be able to order it to be shipped from an artisan ice cream shop to where you are if such products are legal in your state. Artisan ice cream shops are beginning to recognize CBD oils, powders and other CBD extracts as potent and beneficial ingredients.

Specialty shops all over the country are now infusing their ice cream and other products. Customers looking to get the benefits of CBD while enjoying a sweet treat can visit stores in their areas, but major chains won’t have nationally created brands anytime soon.

Why is the Concept of CBD Ice Cream So Popular?

Marijuana has gotten a bad rep over the years, with many sources citing it as a potential cause of many societal ills and conditions. Recently, the government and the public have been reassessing this position, and CBD, in particular, has been the subject of renewed interest.

CBD lacks the psychoactive effects of THC, a component of cannabis that is responsible for the feeling of users being “high.” CBD, on the other hand, has been indicated in the activation of many of the major receptors in the brain.

Many of these receptors work to deliver important signals throughout the nervous system. These signals include instructions on the regulation of movement, memory, mood and even pain. Many users swear by CBD and often utilize it on a regular basis to address a variety of symptoms.

CBD’s ability to be cultivated and used in a variety of ways also makes it an attractive option to many. It can be vaped, used in a bong, taken sublingually and placed in edibles like brownies and gummies. So it’s no surprise that ice cream would be the latest in a list of things users have been waiting for.

Ice cream lovers can rejoice as many of their favorite flavors won’t necessarily be affected by the CBD oil that it contains; the taste won’t be fundamentally changed or transformed. This is why brands like Ben & Jerry’s are hoping to put a CBD spin on some of their customer’s favorite classics, while also making new ones.

What Exactly is CBD’s Status?

It may be confusing as to the current status of CBD and CBD infused foods. If you’re not in the know, the difference between what’s legal and illegal can be a very strange gray area. In 2018, the Farm Bill was signed by President Trump. This 2018 bill lifted a former ban on producing hemp. But the bill leaves each state to interpret how they see CBD and cannabis products, and some states still classify these as illegal.

Hemp, however, has a pass on the same kinds of restrictions. CBD cultivated from hemp including CBD oil is legal for use throughout the U.S. as long as it contains no THC.  However, consumers must be aware that both marijuana and hemp are cannabis.

Nationally, marijuana is still considered to be an illegal substance and classed as a Schedule I drug, though there has been increased pressure to change this.

Where Can I Get My Own CBD Ice Cream?

If you live in a state where CBD is legal (some states specify that the CBD oil can contain no more than 0.3% THC), you can order your own CBD ice cream online. However, if everything is completely legal, you can always make your own.

Creating this cool and delicious treat isn’t hard, and if you follow the recipe below, you can make a dish that will be a hit either by yourself or with friends. This recipe takes about a day from start to finish, but if you’re looking for CBD ice cream, this is a great way to get it!

*It is recommended that you use a hand mixer and thermometer.

Step One: Prepare Your Honey

The first thing we are going to do is quickly infuse the CBD into your honey. To make this even simpler, you can utilize a double-boiler.

If the ice cream is to your liking you can take out the container and enjoy! Serve to your friends or enjoy this as a snack. It may not be Ben & Jerry’s, but you might find it’s just as delicious. Try it with any number of other desserts and keep a lookout for legislative changes in the near future: CBD ice cream just might be on the shelves of your local grocery store.

How to Make Cannabis Sugar

Marijuana Turkey Roast Recipe | How to Prepare This Fun Dinner

Cannabis-Infused Maple Syrup Candies [Are They Any Good?]

What Are Weed Firecracker Edibles & How to Make Them?

One of the easiest edibles around

Get your CBD drink on!

How to Infuse Coconut Oil with Marijuana

Eat your daily dose of cannabis