Residents of 33 states plus D.C can access medical marijuana. The criteria usually include being a resident of the state and having a qualifying condition. Most MMJ programs also have a minimum age limit of 21. Things are less clear cut if you have a felony conviction, however.

The question of ‘can I get medical marijuana if I have a felony’ is a consistent inquiry from WayofLeaf readers. Unfortunately, the answer isn’t entirely as cut and dry as one would hope. Rough estimates suggest that 24 million people live with a felony in America. It is a number far beyond the 6.1 million estimated by The Sentencing Project in 2016.

We just deliberately used language akin to what we write when discussing medical conditions. Why? Because in many cases, individuals with felonies are treated as if they have a contagious disease!

Convicted felons lose many rights in the United States. Some are restored over time, while others are lost forever.

Here are a few rights they lose, though they vary according to state:

The right to get medical marijuana is another that varies depending on where you live. In this article, we take a more detailed look into this burning issue. Bear in mind that possession of a small amount of marijuana is a felony offense in some states!

I Have a Felony… Can I Still Get Medical Cannabis?

Those convicted of a felony know first-hand how much of a roadblock it presents when accessing otherwise ‘normal’ things. Felons have a far harder time getting a job and re-immersing themselves in society. In some states, they even have their right to vote revoked.

For example, in states like Tennessee, Mississippi, and Alabama, individuals convicted of certain felonies lose their right to vote forever. In fairness, it often only applies to those convicted of serious crimes such as rape and murder. Other states aren’t quite as strict. For example, you can vote even while behind bars in Vermont and Maine. However, a felony conviction will have immediate and long-lasting repercussions in your everyday life.

Interestingly enough, obtaining MMJ if you have a felony depends on the state you live in. In much the same way as voting restrictions, the specific laws and regulations vary from state to state.

Christopher Uggen, a sociology professor at the University of Minnesota, has an interesting take:

“State disparities are really astounding … It is definitely confusing at election time, and many former felons are risk-averse — they may not vote if they are afraid of getting a felony conviction for illegal voting.”

Therefore, convicted felons may steer clear of medical marijuana, even if they need it. Let’s take a look at the states that bar felons from using MMJ. First, however, we’ll analyze some interesting facts relating to the topic.

Interesting Facts About Felonies and Medical Marijuana Use in the U.S.

Estimates on the number of Americans with felonies vary. A study by Shannon et al., published in Demography in October 2017, claimed that 8% of all adults had a felony conviction. The study also found that an incredible 33% of African-American men had a felony conviction to their name. Overall, the research suggests that there were 19 million Americans in jail in 2010 with a felony record.

Meanwhile, a study by Dr. Nicholas Eberstadt, published in American Enterprise Institute in May 2019, painted a depressing picture. The study author believes there is a ‘blind spot’ in American national statistics. He claims that the actual number of people with a felony in America is 24 million. Regardless of the real figure, we know that millions of people could lose access to MMJ.

Which States Allow Felons to Use MMJ, and Which Don’t?

Interestingly, medical marijuana is less restricted than things such as voting rights and public housing. A significant majority of individual MMJ programs make no mention of restrictions for felons. In most cases, the law states that requirements to obtain medical marijuana include:

Some states go even further in favor of felons. Proposition 64 in California, for example, has created a path for nonviolent weed offenders to clear their records. If this expungement process is successful, you could get a gun license, own a cannabis growing business, or serve on a jury! 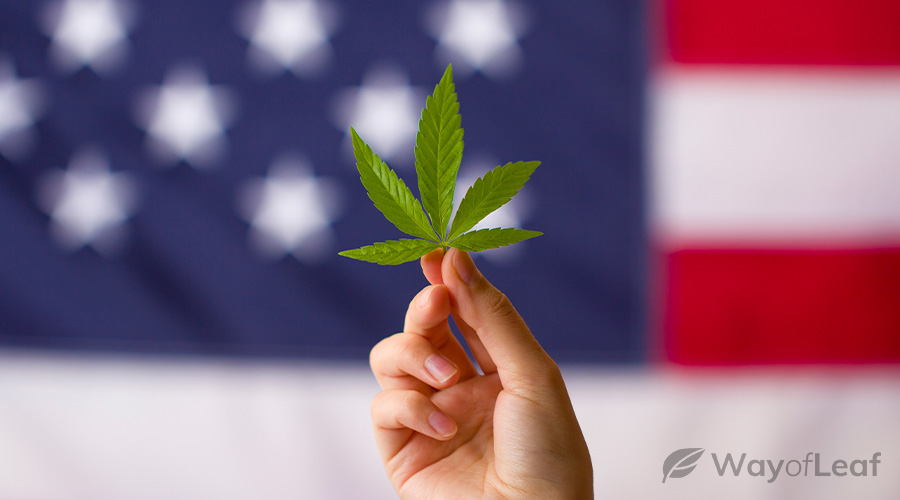 Sadly, locations like the state of Illinois are more draconian. MMJ applicants must have their fingerprints scanned and go through a background check. If the test shows a conviction for a drug crime, you don’t get an MMJ card. You may have your record cleared if a first-time offender, however.

The story is similar in Iowa, where a felony drug conviction prohibits you from obtaining an MMJ card. It is one of those states where the ‘once a criminal, always a criminal’ mantra is unfairly applied. It seems as if Iowa and Illinois are the only MMJ programs that explicitly prohibit felons.

Establishing a legal medical marijuana business with a prior felony conviction is a different matter entirely, however.

Can Felons Get Medical Marijuana? Most Likely No if They’re Trying to Open a Business…

Most states that offer legal medical marijuana programs do not allow felons to attain commercial business licenses. It is especially the case if their prior convictions were for drug or drug trafficking-related charges.

“Permitting those who have demonstrated the interest and willingness to ignore state and federal drug laws sends the wrong signals to those who would participate in the legal, regulated [marijuana] industry.”

Many other U.S. states have implemented similar restrictions to would-be cannabis business operators with a felony conviction. These restrictions are supposed to “legitimize the trade.” One concern is the transportation of MMJ products from a legal to an illegal state.

All states where recreational cannabis is legal restrict marijuana business licenses based on criminal conviction history.

In Nevada and Washington, the state only looks at your last ten years. Almost all adult-use states (California and Washington excepted) prevent individuals with certain convictions from even working in the industry.

In Alaska, for example, you can’t get a marijuana business license with a felony conviction in the last five years. The restriction also applies to those still on parole for a felony. Even those who sold alcohol without a license to minors are prohibited. Alaskan residents can’t even work in a recreational weed business with a felony within the last five years. You are also out of luck if convicted of a misdemeanor within the previous two years.

So What’s the Answer – Can You Get Medical Marijuana if You Have a Felony?

Our unofficial answer is yes. You can avail of MMJ if you live in most legal states, barring Illinois and Iowa at present. If you know of any other state where you cannot get medical cannabis with a felony, be sure to let us know.

Lastly, it’s worth pointing out that many states issue restrictions on caregivers with felony convictions. A caregiver is someone legally allowed to purchase, transport, deliver, and sometimes even grow medical marijuana for a qualified patient.

Therefore, felons can use medical cannabis in most states if they meet the program’s criteria. However, it is a different story for caregivers or those seeking to profit from the industry’s boom.

What Are the Consequences of Getting a Medical Card for Marijuana?