At present, marijuana is legal in up to 33 states plus Washington D.C. for either recreational or medicinal use. However, it is federally illegal. In theory, the government could one day decide to arrest everyone in possession of weed in Colorado, for example. This is even though it is legal within the state for recreational purposes.

At the time of writing, there are 22 states where cannabis is only legal for medicinal use.

In these locations, you need a medical marijuana card (MMJ) if you wish to treat an ailment with the plant. Each state is allowed to develop its own rules. As a result, it is much easier to get your MMJ card in some places than in others.

The majority of states have relaxed their cannabis laws with decriminalization. However, there are still several states where possession of even a tiny amount of cannabis is entirely illegal.

In Alabama, for example, first offense possession is a misdemeanor and could result in up to a year in prison. However, further offenses are felonies with severe jail time involved. In Idaho, possession of between three and sixteen ounces is a felony with a prison sentence of up to five years as the penalty!

Several locations have legalized cannabis for medical use but make it extremely tough to qualify. In these states, you can expect to jump through a lot of hoops and complete enough paperwork to kill several trees. In this article, we look at the hardest and easiest state to gain your MMJ Card.

Although the state legalized medical marijuana in 2015, the program remains restrictive several years later. In fact, MMJ wasn’t dispensed in Louisiana until August 2019!

Governor Bobby Jindal signed HB 149, which was supposed to set out the framework of how medical patients would receive the plant. However, it took until May 2018 for the state government to provide licenses to nine businesses. This is a wholly inadequate number for a state with a population of 4.7 million. In Louisiana, you get cannabis from a ‘pharmacy’ rather than a dispensary. These locations must operate similarly to regular pharmacies. 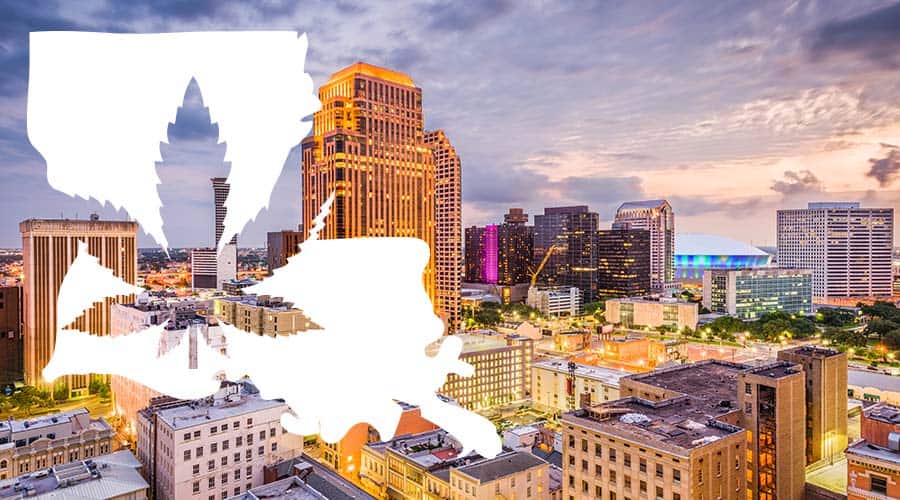 These pharmacies are spread out across nine regions in the state. For example, H & W Drug Store, LLC, serves Region 1, which includes St. Bernard, Orleans, Jefferson, and Plaquemines parishes. For a lot of MMJ cardholders, this means a long drive each time they want to purchase medical Mary Jane.

Southern University and Louisiana State University are the only locations in the state where it is possible to grow medical weed. Just 4,350 patients had bothered to sign up for the MMJ program in its first six months.

Even now, the state’s Board of Medical Examiners is still trying to license physicians who are interested in recommending medical marijuana. There is little sign of the state’s doctors getting involved either. By the end of 2017, over two years after the announcement, only six physicians in Louisiana had signed up for the program! By May 2018, the number had barely increased to 11, and only 15 physicians had even applied.

One of the main issues is that Louisiana doesn’t have a state-specific program. Instead, the state’s Department of Agriculture and Forestry oversees it. There is no online application process. You can only get a recommendation from one of the few physicians with a permit from the Louisiana Board of Medical Examiners.

The limited number of access points means medical patients are finding it hard to purchase cannabis. There are also severe restrictions on the number of medical conditions that ensure an applicant is eligible for an MMJ card in the first place. Qualifying conditions include:

You don’t receive an MMJ card in Louisiana as you do in other states. Instead, your physician adds you to the Board of Pharmacy as a qualified patient.

Even patient possession limits are strict. Once you receive approval, you are only allowed a 30-day supply of ‘non-smokable preparations of marijuana.’ However, the state has increased the number of qualifying conditions. It has also removed the restriction that only allowed physicians to certify a maximum of 100 patients. Fortunately, MMJ patients no longer have to recertify every 90 days.

Even so, Louisiana still ranks as the worst legal state for MMJ cardholders. Its program seems stuck in the Dark Ages. The Americans For Safe Access’ (ASA) most recent annual report gave the Louisiana program a ‘D’ rating. Only Utah scored lower among states that have a functioning MMJ program.

Our guide to MMJ in Louisiana…

One other issue is the cost of cannabis in the state. Some patients must pay up to $400 per month to get the marijuana they need. There are plans to improve the state’s medical-marijuana program, and a change can’t come soon enough.

The most recent ASA report rates other MMJ programs higher than New Mexico. However, the state scored 89.67%, just 0.33% below the 90% ‘A’ grade rating. Both Oregon and Illinois’ programs rank higher. However, the latter forces applicants to pass a criminal background check.

There are no such issues when looking for an MMJ card in New Mexico. You need to fill in the New Mexico Department of Health’s ‘Medical Cannabis Program’ form, which is short and easy to complete.

Medical cannabis was legalized in 2007, so the state has had time to implement a common-sense program. When Governor Bill Richardson signed the bill into law, he said: “This is for medicinal purposes, for… people that are suffering. My God, let’s be reasonable.”

New Mexico has steadily increased its number of dispensaries to meet demand. The program receives hundreds of patient applications each day. Even so, the state strives to approve each completed request from eligible patients within 30 days of receiving the form.

There is a lengthy list of qualifying conditions, over 20 at the last count including:

The state’s program is far from perfect. However, its lawmakers continue to try and improve things. The ASA report noted that Governor Lujan Grisham signed SB 406. It’s a bill that provides exemptions from criminal and civil liability for all caregivers, patients, and employees. It also established civil rights protections in the area of child custody and medical care.

Overall, it is difficult to find a state MMJ program easier to access than the one in New Mexico. Book a consultation with a physician and register online once you receive approval. Submit your application and wait.

Although there are several contenders, we believe that New Mexico is arguably the easiest state to qualify for your medical marijuana card.

Louisiana is on the other end of the spectrum. Unfortunately, very few state physicians seem interested in becoming licensed to approve MMJ cards. There is no online application, limited pharmacies, and cannabis is very expensive. Although there are recent improvements, Louisiana has an awful lot of work to do to improve its medical marijuana program.