That the world needs an alternative to plastic isn’t in doubt. Leo Baekeland coined the term ‘plastics’ to describe these synthetic or semi-synthetic malleable organic compounds. He created Bakelite in 1907, the world’s first synthetic plastic.

Developed nations use around one-third of plastic for packaging. Globally, we use 50 kilograms of plastic per person annually. As convenient as plastic is, the material is disastrous for the environment. It takes anywhere from 10 years to 1,000 years for a plastic item to decompose in a landfill. Burning it releases toxic gases like mercury and dioxins.

Greenpeace estimates that we dump approximately 200 kilos of plastic in the world’s seas and oceans every second. The damage caused by plastic disposal accounts for the death of 100,000 marine animals and one million seabirds each year.

Hemp Plastic Is a Viable Option

The use of hemp plastic to reduce the damage caused by regular plastic is a growing trend. Hemp is now legal to grow in the United States and a host of other nations. It is clean, sustainable, renewable, and ecological. Crucially, it is also remarkably versatile. 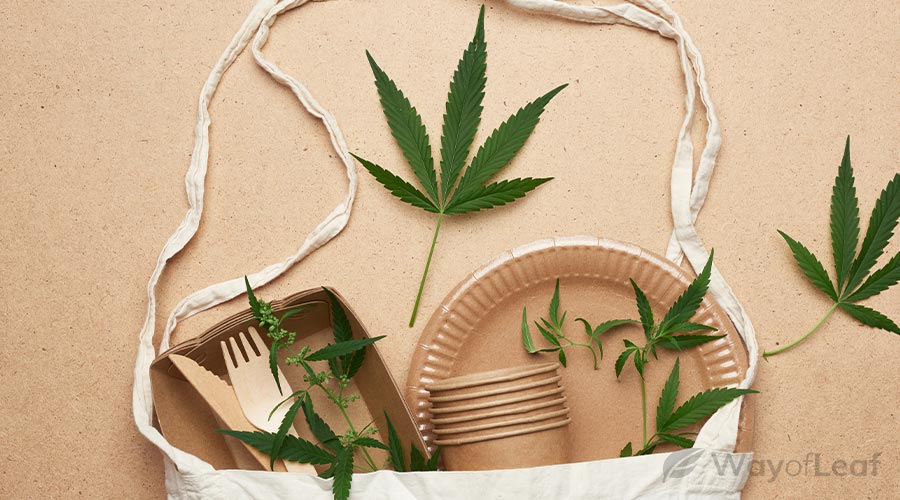 We can use it to replace polluting materials in the construction, design, automobile, and fashion industries.

One of the many benefits of hemp plastic is the speed at which it biodegrades. In general, it will biodegrade in 3-6 months. Moreover, it is possible to recycle it indefinitely. Termed a ‘bioplastic’ material, hemp plastic isn’t made from fossil fuels, which means it doesn’t produce CO2 as it decomposes.

It is hemp’s cellulose content (65-70%) that makes it the ideal plastic manufacturing material. Cellulose plastic is already a popular bioplastic. Let’s check out the manufacturing process.

Cellulose is a polysaccharide that you can extract from various natural resources such as the hemp plant. In general, cellulose doesn’t exist in a pure form. Instead, you find it in composite form, with various other compounds. They may include hemicellulose, lignin, and other polysaccharides.

Therefore, manufacturers must remove non-cellulosic material to produce the pure cellulose needed for hemp plastic. Unfortunately, it is a long and complex process.

However, a group of scientists looked to simplify matters a few years ago. Their work is outlined in a study published in the National Agriculture Library in 2014. The researchers aimed to create plastics from biomass and noted that cellulose was a potential material of choice.

How hemp could change the worl…

The researchers soaked the biomass material in acid. This was because they only wanted to break apart the cellulose’s crystalline structure rather than convert it into simple sugars. They used trifluoroacetic acid (TFA). It isn’t as strong as the acids used in biofuel applications. 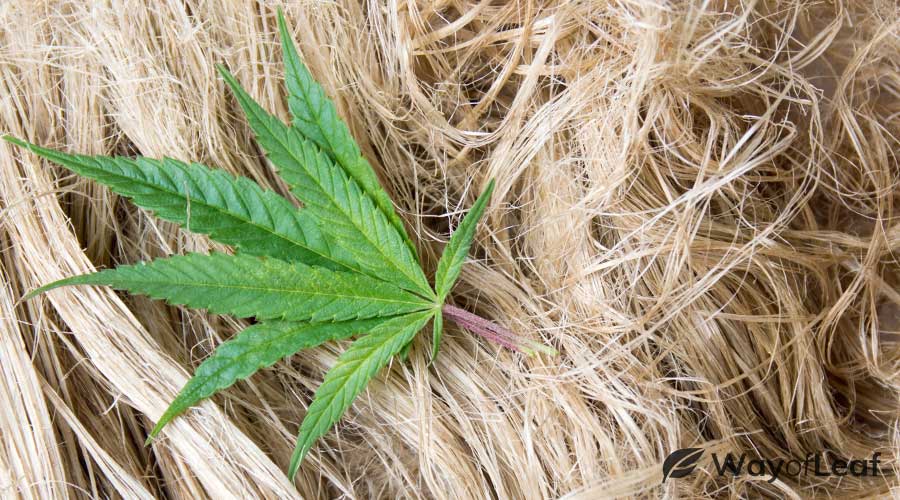 They used the TFA to soak the inedible waste from rice, spinach, parsley, and cocoa beans. After a few days’ worth of soaking, the team managed to remove the volatile acid. The result was a yield of plastic coatings and films with various properties. For instance, the materials had similar tensile strengths to many popular polymers. The bioplastic also began thermally degrading when exposed to a temperature range of 300 – 570 degrees Fahrenheit.

In June 2020, South Dakota University (SDU) announced research that aims to extract cellulose efficiently. According to assistant professor Srinivas Janaswamy, we can extract the material from different biomass types. 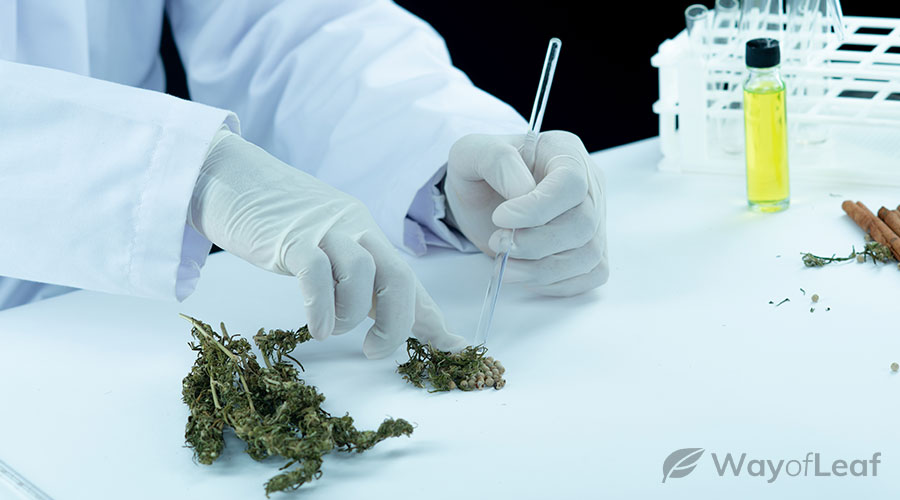 Janaswamy also reiterated the point about breaking down cellulose before using it. The SDU team used a zinc chloride solution to break down the cellulose network. Then, they added calcium chloride. This process crosslinked the cellulose chains and helped develop strong films.

Other Forms of Cellulose Extraction

One common method is to hydrolyze raw pulp. This process involves adding water to separate the pulp into its component parts at a temperature range of 122 – 194 degrees Fahrenheit. As the studies above show, you can also soak the pulp in a weak acid. It results in the separation of the crystalline sections from the amorphous ones. The result is nanocrystalline cellulose.

Subjecting the material to additional pressure and heat may result in nanocellulose. This looks like a gel. In standard conditions, it is viscous. However, if it is subjected to stress or shaken, it takes on a more liquid form.

The Zeoform brand creates hemp plastics via cellulose-based plastic. The company utilizes a patented process that involves the use of water and natural cellulose fibers like hemp.

What Are the Different Types of Hemp Plastic?

There are several options available. Some of the entries might surprise you.

No organic polymer is more abundant than cellulose. It is typically used for making paper. However, the research outlined above illustrates that we’re getting ready to find further uses for it.

Remember, cellulose is a long-chain polysaccharide. It is comprised of an enormous number of glucose units. Cellulose forms tiny strands free from fibers in a plant’s cell walls. Though it has several crystalline forms, it mainly consists of crystalline and amorphous sections.

Related article
Why Don’t We Have Hemp Cars?

Weighing up the pros and cons…

Cellophane and rayon are relatively well-known plastics. Structurally identical to cellulose, they involve a similar production process. The first step involves dissolving cellulose in an alkali solution. Then it is placed into sulphuric acid to create a cellophane film. Otherwise, you can place it through a spinneret device instead of the acid to create rayon.

Celluloid involves combining nitrocellulose and camphor. It is possible to use hemp cellulose to create celluloid, cellophane, and rayon.

A polymer matrix makes up composite plastics. There are numerous natural polymers, including shellac, tar, and tree resins. It is common to mix a synthetic polymer such as glass fiber with a natural fiber to create a biocomposite. It is possible to use hemp as a natural fiber, and its high tensile strength makes it an attractive option.

The use of hemp plastic has only begun once again in the modern era. It was illegal to grow hemp in the United States since the Marihuana Tax Act of 1937. This all changed in December 2018. The predictable surge in hemp production means we can, once again, focus on its use in the creation of plastics. Hemp is rich in cellulose, which is already part of many forms of plastic.

Ultimately, we hope that the rate of hemp plastic used in the world grows exponentially. Unlike existing plastics, the hemp equivalent biodegrades in a matter of months. This means less pollution in the seas and oceans of the world. Hemp plastic also doesn’t produce carbon dioxide when degrading. This means the material could help in the fight to prevent climate change.

Related Articles
What Are the Pros and Cons of Hemp as a Material?

0
5 min read
How Much Would It Cost to Build a House out of Hemp?

0
5 min read
Why Was Hemp Banned After World War II?

0
6 min read
What Are the Biggest Disadvantages of Hempcrete as a Building Material?

0
5 min read
Is Industrial Hemp Legal in My Area? [State by State Breakdown]

0
7 min read
Hemp vs. Lithium Batteries: Which Is Best?

0
3 min read
Hemp and 3D Printing – The Manufacturing Process of the Future?

0
5 min read
How to Build a House Using Hemp

0
5 min read
Hemp vs. Cotton: Is This the Future of Clothing?

1
3 min read
How to Grow Industrial Hemp: Is It Legal?

3
9 min read
5 Ways Hemp Can Save the Planet