Carl Linnaeus was the first to classify the Cannabis sativa in 1753. Jean-Baptiste Lamarck identified Cannabis Indica and published his findings in 1785. Cannabis ruderalis remained unidentified until named by D. E. Janischevisky in 1924.

However, the marijuana plant has been used by humans for thousands, possibly tens of thousands, of years. In fact, it has been illegal for less than 1% of the time since we first used it. While the precise origins of cannabis are not completely known or understood, we have been able to glean a greater degree of detail about it in recent years. Perhaps full legalization will help us unlock even more mysteries?

Botanists use a term called ‘biological taxonomy’ to determine how various species of animals and plants are related. For instance, an individual species is placed in a genera; then they are placed into families which are grouped into other categories, and the process continues until there is nowhere else to group them. It is an important method of understanding the similarities and differences between the millions of life forms on Earth.

Therefore, Cannabis is a genus of flowering plant and was placed in the Cannabaceae family by Stephan Endlicher, an Austrian botanist, in 1837. He also placed weed’s sister plant, Humulus in the same family. Later, other botanists grouped cannabis into the nettle family (Urticaceae) and then the fig family (Moraceae). In 2002, a study determined that Cannabaceae was a distinct family which included species of the Celtis genus.

The earliest reputable fossil records suggest that Urticaceae emerged around 34 million years ago. Meanwhile, Humulus lupulus (hops) became completely speciated approximately 6.38 million years ago. Therefore, we were able to surmise that the cannabis plant evolved at some point between those two dates. It diverged from the genus Humulus so there is a clear link between marijuana and beer since both are related to the hops family.

Perhaps one of the major mysteries surrounding weed has finally been solved! At least it could be according to a study by McPartland et al. It was published in Vegetation History and Archaeobotany in May 2019. In it, the researchers reviewed over 150 fossil pollen studies in Asia. According to their findings, the team announced that Cannabis and Humulus diverged around 27.8 million years ago.

While cannabis is now recognized as its own genus of plant, scientists are unable to agree on how the breakdown from genus to species occurred. One suggestion is that environmental changes caused the appearance of different marijuana species. Remember, marijuana has been around for potentially 28 million years, and during that time, there have been Ice Ages and extremely hot spells.

Remember, marijuana has been around for potentially 28 million years, and during that time, there have been Ice Ages and extremely hot spells.

During colder times, the advances of glacial ice sheets caused marijuana to spread south in search of warmer climes. During warmer spells, the ice melted and cannabis was able to go north. Humans have influenced the growth and evolution of the plant in the last few thousand years, but it is nature itself that’s had the biggest impact.

What is also fascinating is that the cannabinoids we know and love, THC and CBD, probably didn’t exist in cannabis until a few million years ago. A study by Laverty et al., published in Genome Research in November 2018, suggests that ancient viruses are the reason why cannabinoids such as THC and CBD are in weed in the first place!

Cannabis: Its Origins in Humankind

No one knows how long humans have used marijuana. We know it is possibly the oldest crop we’ve cultivated. However, everything we believed we knew has been seriously undermined by recent discoveries. Traditionally, it is said that weed originated in Central Asia with the Mongolian steppes and Altai mountain range among the favorites. The McFarland study suggests the plant originated in Tibet however. 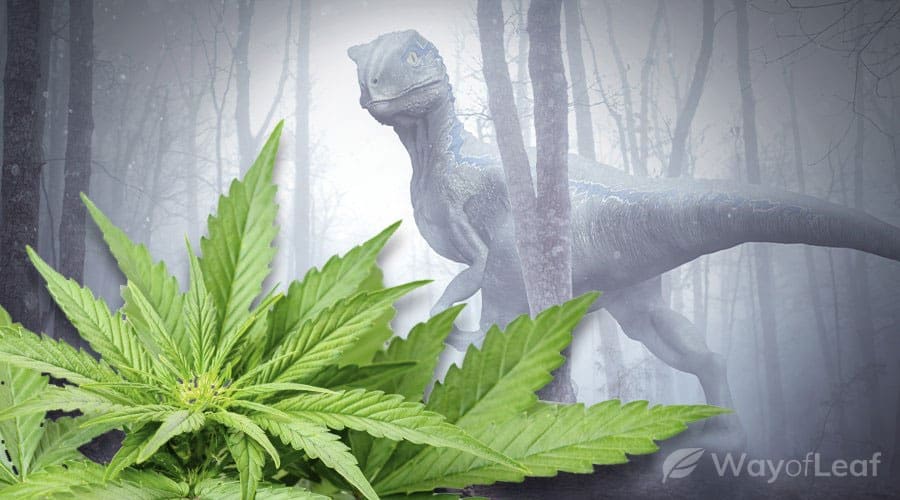 Excavation of a Neolithic site dated from 10,000 BC in Yuan-shan Taiwan revealed pottery with hemp cord marks on the surface and a stone beater used to beat hemp. The hemp rope found in former Czechoslovakia predates the Taiwanese site by over 17,000 years.

Unfortunately, nothing has been found between these two dates, but since the rope was discovered in Central Europe, it means that hemp was first cultivated outside Asia or else it was used thousands of years before that date and then spread to Europe. However, if the plant spread millions of years ago as scientists now believe, perhaps other Homo species close to humans used it as well?

Further excavations have discovered a variety of textile articles made from silk and hemp. These items were found in a Chinese Neolithic site and were dated to 4,000 BC. During this period, the Yangshao economy of the Yellow River valley relied heavily on cannabis and archaeologists have found evidence that the people of the Yangshao wore hemp clothing and created hemp pottery. Hemp seeds were pressed for oil and used in cooking or as a salad dressing.

Weed was possibly first used for medicinal purposes approximately 6,000 years ago. There is an element of doubt over the first written record of marijuana use for medicinal purposes in 2737 BC by Shen Nung, the Emperor of China at the time. He wrote that cannabis was effective in the treatment of gout and rheumatism.

The problem is, ‘Shennong’ is the name of a deity in Chinese religion, and historians are unable to find evidence that Emperor Shen Nung existed. The Ancient Chinese never wrote down dates, so there is no way of knowing what was written, and when! Shen Nung was one of the ‘Celestial Emperors’ (along with Fu-Hsi and Huang Ti) and apparently ruled for 140 years! 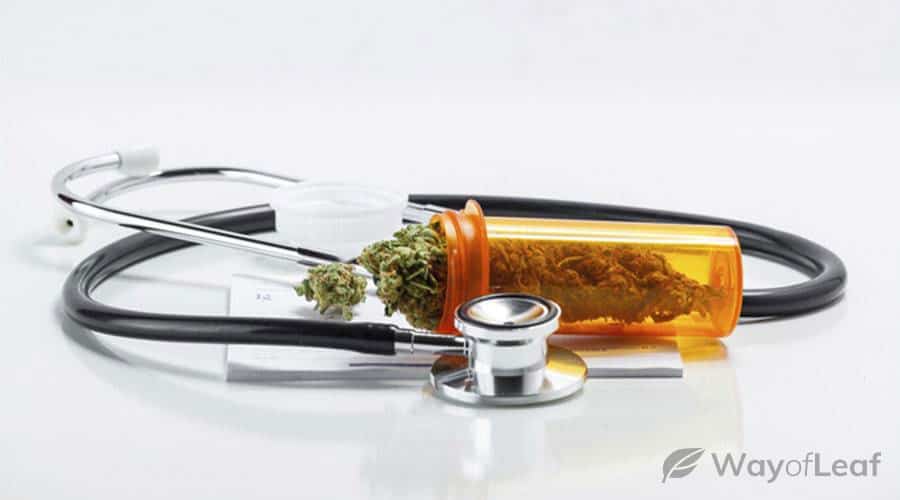 Huang Ti, the Yellow Emperor, supposedly ruled for 493 years, so it is safe to say that this is utter fiction. Also, there is no evidence for a unified Chinese ruler before 221 BC or a record of a ruling family before the start of the Shang Dynasty in 1600 BC. Even the unconfirmed rule of the Xia Dynasty probably began no earlier than 2100 BC.

Marijuana began to spread from China in around 2000 BC where it ended up in the Middle East by 1400 BC at the latest and eventually arrived in Europe in the First Century AD. As an interesting aside, Ancient Greece, one of the most enlightened and influential societies of all time, almost certainly used marijuana, and lots of it; a fact that anthropologists seem keen to gloss over.

One Egyptian mummy dated to approximately 1,000 BC was discovered to have trace amounts of THC from weed in its soft tissues, bones, and hair due to the standard of the body’s preservation. Over four times more weed was found in the mummy’s fat cells than is in the average German medical marijuana patient!

Myths About Early Marijuana Use

Most of us are aware of the dreadful Reefer Madness era and the war on weed that has been waged ever since. Marijuana proponents like to point out that until the recent era of oppression, countless societies have enjoyed weed without any ill effects. Remember, there isn’t a single case of someone dying from a cannabis overdose in recorded history. With a lack of evidence to support their assertions that marijuana has been bad forever, anti-weed campaigners have taken to fiction.

In the 1937 publication: ‘Marihuana; America’s New Drug Problem’ by Robert P. Walton, the author tries to suggest that Herodotus, the ancient historian, described the intoxicating properties of marijuana and how it took over the minds of the Scythians that used it. First of all, Herodotus wasn’t on the islands in the Araxes river where these events allegedly took place. Secondly, the historian writes the word ‘fruit’ instead of ‘hemp.’ Finally, he is the only source for the myth.

It is worth noting that Herodotus DID write about hemp but used the correct name (not ‘fruit’) and wrote about how the Scythians grew it for fiber and made garments from it. Nowhere else in his writings does he mention hemp causing a loss of control or anything of the sort.

Another myth that was widely circulated during the 1930s was the ‘Nepenthe Myth,’ which originated from Homeric poems dated between the 9th and 6th century BC. The tale states that Helen of Troy learned about the power of Indian Hemp or Cannabis Indica from the Egyptian King’s wife. She drank it to lull pain and anger, and forget about sorrowful thoughts. The word ‘Nepenthe’ was used to describe the drug which was supposedly weed.

Walton hilariously wrote: “There is no proof, however, that the drug was not hashish.” Oddly enough, there is no proof that it WAS weed either! To this day, none of the proponents of the ‘Nepenthe Myth’ can back up their allegations with the merest shred of physical, written, or archaeological evidence

To this day, none of the proponents of the ‘Nepenthe Myth’ can back up their allegations with the merest shred of physical, written, or archaeological evidence.

Of the tens of thousands of marijuana studies that have been conducted to date, not one of them has ever reported symptoms in any way similar to those allegedly suffered by Helen. The only ‘evidence’ that Walton could come up with was that the hemp plant was available at the time. Then there is the minor fact that Helen of Troy almost certainly didn’t exist!

Final Thoughts on the Origins of Marijuana

Marijuana has been cultivated and used for at least 12,000 years, although recent evidence suggests it was first used at least 30,000 years ago. It enjoyed an almost uninterrupted run throughout history as practically every society recognized the benefits of the plant for medicinal and recreational purposes.

Sadly, in the supposed ‘enlightened’ modern era, cannabis has suddenly become the Devil after millennia of safe use. Meanwhile, governments around the world stand idly by and allow pharmaceutical companies to fill our bodies with poison.

While 11 American states plus D.C., along with the nations, Canada and Uruguay, have seen sense and are allowing a natural plant to be used recreationally, others are still lagging behind the times. It seems as if ‘profit’ is the main hurdle and, until powerful entities find a way to make money from weed legalization, it will remain illegal in far too many places.

What Is Bubble Hash? And How Do You Use It?

CBG: All You Need to Know About This Cannabinoid