CBL, also known as cannabicyclol, is one of the many compounds that the cannabis plant produces. However, unlike its cousins THC and CBD, we know very little about CBL and how it affects the human body.

In this article, we explore the current knowledge of CBL and how we might learn more in the future.

CBL is short for cannabicyclol. Its alternative name is cannabipinol or CBP. This chemical is a phytocannabinoid, one of the many synthesized in the resinous trichomes of Cannabis sativa L. plants.

The most famous phytocannabinoids are THC (tetrahydrocannabinol) and CBD (cannabidiol).

The former is predominant in most strains of marijuana and is responsible for its intoxicating effects. And while CBD does not possess the same level of psychoactivity, scientists have linked it with a range of beneficial effects.

Furthermore, there is a whole range of lesser-known phytocannabinoids, including:

Some of these cannabinoids form when others break down with heat, light, or time. For example, heat is necessary to convert THCA and CBDA into their active forms, THC, and CBD. This process happens automatically when you smoke cannabis in a joint, bong, or vaporizer.

However, if you plan on making edibles, you will need to decarboxylate your cannabis first. If you skip this stage, you will not activate these cannabinoids and will probably be disappointed with the results.

Another example is CBN, which forms when THC degrades over time. Like THC, CBN has some psychoactive properties, although it is not as potent. It also has more sedative than euphoric effects.

Similarly, CBL forms from the breakdown of CBC. This process happens in the presence of heat and light. For this reason, older cannabis has higher levels of CBL than fresh herb. Even so, it is only ever present in tiny amounts.

Interestingly, CBL has the molecular formula C₂₁H₃₀O₂, which is the same formula as THC and CBD. However, all three chemicals have a slightly different arrangement of atoms, giving them their separate names and effects.

What Is Special About CBL?

Although we know very little about CBL, we do know that it is a very stable molecule. Scientists have found relatively high quantities of CBL in cannabis samples that are around 2700 years old!

The samples came from an ancient tomb in western China. The arid climate of the region, coupled with alkaline soil and the grave’s depth, preserved its contents exceptionally well. The tomb contained the skeleton of a male, approximately 45 years old. The items buried with him indicated that he was a shaman. 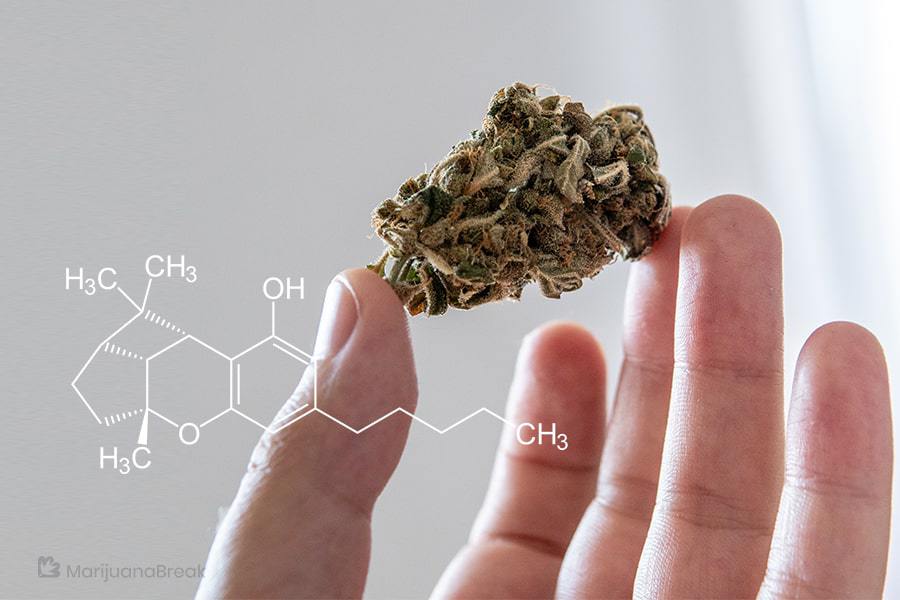 Among these items was a large amount of cannabis. The leaves had retained much of their green color, although their distinctive aroma was gone. When scientists tested the sample, they revealed large amounts of CBL and CBN. This is hardly surprising considering that these two compounds form via the breakdown of other cannabinoids.

This information is relevant if you have cannabis that you have stored for a long time. You can expect far higher levels of CBL and CBN than you would otherwise find in this situation.

Are There Any Benefits of CBL?

Unfortunately, because CBL occurs in cannabis in such low concentrations, it is challenging to extract and study.

We know that other phytocannabinoids have a variety of potential benefits. These include stimulating the appetite, relieving pain and inflammation, reducing nausea, and a range of other effects.

However, it is currently impossible to say for sure whether CBL shares any of these benefits. In fact, one of the few studies that exist on the cannabinoid suggests it may trigger convulsions in rabbits. However, these findings are unlikely to be a cause for concern due to the extremely low levels of CBL in cannabis

But while we know very little about the benefits of CBL, we do know more about its precursor CBC.

One of the most prominent endocannabinoids is anandamide. It has many essential functions within the body and helps to maintain a state of homeostasis (internal balance). CBC affects the endocannabinoid system by inhibiting the uptake of anandamide. This activity increases the levels of this helpful chemical in the bloodstream.

It is possible that CBL may have similar effects on the endocannabinoid system. However, until further research emerges, we can only speculate.

What Does the Future Hold for CBL?

In recent years, interest in cannabis and its active compounds has increased significantly. More and more research is now emerging, helping us understand the many benefits of this plant better.

While, to date, information on CBL is sparse, this is likely to change in the near future. Many scientists are dedicating their careers to researching cannabis and its effects. Therefore, it is only a matter of time before we glean more knowledge of CBL and its properties.

In the meantime, here is a summary of the best-known cannabinoids and their potential uses:

This list of uses is likely to continue growing as more evidence emerges to explain how phytocannabinoids affect human physiology.

What Is CBL? Final Thoughts

We know very little about CBL and its effects on the body, primarily due to it occurring in such small quantities in cannabis. It is more prevalent in older plant material that has been in storage for a long time. This is because it forms from the degradation of CBC, one of the more prominent phytocannabinoids.

CBL will probably never become as popular as its relatives CBD and THC. However, we will likely learn more about it in the future.

The cannabis industry is growing at an unprecedented rate, and new studies are emerging all the time. Scientists are now paying more attention to the full range of cannabinoids in addition to ‘the big two.’

So, if you want to learn more about CBL, watch this space. Here at WayofLeaf, we aim to keep you up to date on all the latest cannabis research. In the not too distant future, that could well include more on CBL.