At the time of writing, scientists have identified around 120 cannabinoids in the marijuana plant. The illegal status of the drug around the world has impeded research to date. However, Uruguay and Canada have fully legalized cannabis, with Mexico likely to follow. Numerous other countries, and 35 American states (along with D.C.), allow it for medicinal use.

As a result, cannabis research is growing. We are finding out new and exciting things about the plant and its hundreds of compounds.

Cannabidivarin, better known as CBDV, is one of the compounds that has only been researched recently. That the ban on weed has hindered research is unquestionable. Vollner et al. first identified CBDV in 1969.

In 1971, Frans and Merkus wrote about CBDV and tetrahydrocannabivarin (THCV), stating they were ‘two more constituents of hashish.’ It is only recently that CBDV became the subject of detailed research, well over 40 years after its initial identification.

Cannabidivarin is a non-intoxicating compound with a similar structure to CBD. They both have 30 stereoisomers and seven double bond isomers. In general, you’ll find CBDV in plants with high levels of CBD and low amounts of THC. It isn’t an easy cannabinoid to find in any significant amount. Marijuana is the only plant known to produce it, and you don’t find much CBDV in commercial strains.

If you seek a strain high in CBDV, it is best to focus on indica landrace strains from Africa and Asia. Landrace strains are genetically pure, which means they haven’t been impacted by experimentation. Indicas such as Medical Mass and Euphoria may contain relatively high amounts of CBDV. We can say the same for sativas such as Painkiller XL, Royal Medic, and Dance World. 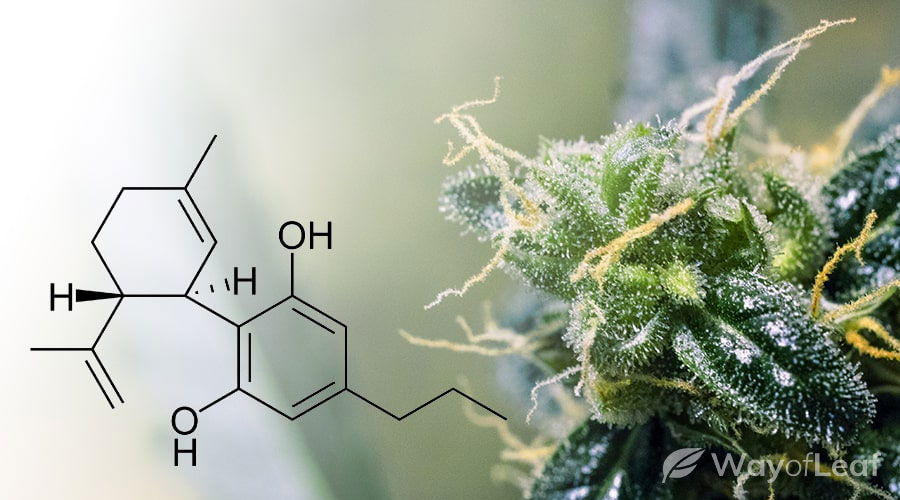 You may also have joy when trying to extract CBDV from hemp. Remember, hemp strains can have a ratio of CBD to THC as high as 100:1. As a result, CBDV could be lurking in the background. As you can probably guess, researchers are trying to discover the medicinal benefits of CBDV. They have conducted several studies within the last decade or so.

Incidentally, you won’t feel a psychoactive ‘high’ from CBDV. Instead, you can expect it to affect you similarly to CBD. The lack of a ‘high’ means we can use CBDV to treat children with conditions such as epilepsy and its associated seizures.

Other potential conditions it could treat include nausea, Duchenne muscular dystrophy, and gastrointestinal diseases such as Crohn’s and inflammatory bowel disease.

One of the primary differences between CBD and CBDV is that the latter is shortened by two methyl (CH2) groups in its side chain. Both marijuana compounds have demonstrated potential anticonvulsant activity in human and animal studies.

Compounds such as THC modulate most of their physiological effects via binding with the CB1 and CB2 receptors. However, cannabinoids such as CBDV, which have anticonvulsant actions, use mechanisms not involving either receptor. 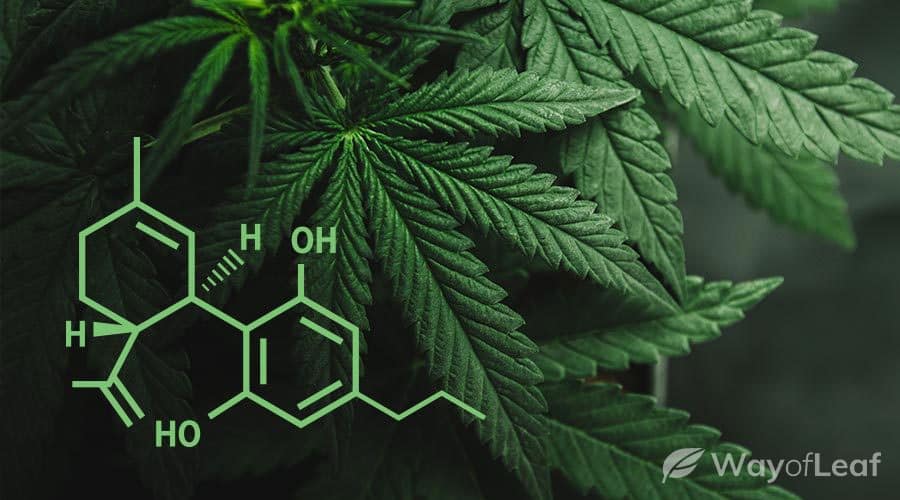 CBDV’s anti-epileptic activity is potentially modulated by the cannabinoid’s effects on the capsaicin receptor, TRPV1. Along with CBD, CBDV has shown an ability to dose-dependently activate and desensitize the TRPA1, TRPV1, and TRPV2 channels. By desensitizing these ion channels, these molecules cause a neuronal hyperexcitability reduction. This helps reduce epileptic activity and associated seizures.

CBDV could inhibit the activity of DAG (diacylglycerol). DAG is the primary enzyme that causes the synthesis of the endocannabinoid 2-AG. However, this particular interaction doesn’t seem to impact the anticonvulsant activity of the cannabinoid.

Big Pharma Is Getting Involved with CBDV

CBDV gained a significant amount of attention in recent times. Big Pharma giant, GW Pharmaceuticals, announced it had started developing it as an experimental compound called ‘GWP42006.’ GW hoped to treat seizures in epilepsy and submitted its product for clinical trials. In early 2018, GW announced that a Phase 2a placebo-controlled study for focal seizure did NOT meet its primary endpoints.

However, the firm stated that it would continue to study the cannabinoid’s use in epilepsy. It also extended investigations to include its possible use in fragile X, Rett syndrome, autism spectrum disorder, and other conditions. Interestingly in October 2017, the European Medicines Agency gave CBDV an ‘orphan designation’ for use in Rett syndrome. It did so again in February 2018 for treatment of Fragile X.

In case you are wondering, ‘orphan’ designation is for drugs that are potentially effective in treating rare diseases. A drug can only receive this status in Europe if it treats a condition that affects no more than 1 in every 2,000 people.

In 2020, the FDA followed the European Medicines Agency by granting orphan designation to CBDV for fragile X and Rett syndromes. Now, Sanobiotec is trailing the cannabinoid for ASD benefits. It is involved in an interventional Phase II study in children with ASD.

Here are the most effective st…

CBDV as an Anticonvulsant

A study by Hill et al. published in the British Journal of Pharmacology in December 2012 looked at CBDV as a possible anticonvulsant in rats and mice. The researchers said that CBDV was an effective anticonvulsant in a broad range of seizure models. Significantly, the cannabinoid also didn’t impact normal motor function. The team concluded that CBDV warranted further investigation as a ‘novel anti-epileptic.’

Autism spectrum disorder (ASD) and intractable childhood epilepsy are closely connected. A study by Hollande of the Albert Einstein College of Medicine in New York is investigating CBDV’s effects in treating ASD issues. These include social functioning & communication problems, and repetitive behavioral issues.

A study by Iannotti et al., published in ACS Chemical Neuroscience in November 2014, looked at the effects of CBD and CBDV on rats with induced epilepsy symptoms. The team found that both cannabinoids interacted with TRPV1. This channel is responsible for detecting and regulating our body’s temperature and producing sensations of pain.

A recent study, published in Frontiers in Cell Neuroscience in 2019, gave hope to individuals with ASD. The researchers discovered that CBDV treatment could ameliorate autism-like behaviors. However, once again, the test subjects in this case were mice.

DMD’s symptoms include irreversible skeletal muscle damage and chronic inflammation. A study by Iannotti et al., published in the British Journal of Pharmacology in May 2019, is relevant. It looked at the performance of non-euphoric cannabinoids from marijuana on muscle quality and performance of dystrophic mice.

The team found that CBDV could not only reduce inflammation but also enhance muscle function. As the compound also improved locomotion, the researchers suggested that the cannabinoid was potentially a novel DMD therapy.

A study by Zamberletti et al., published in the Journal of Psychopharmacology in July 2019, also offered interesting results. It discovered that CBDV helped rescue memory defects in mice carrying the same genetic defect as humans with Rett Syndrome. While the compound also helped with neurological effects, these were transient effects.

Speaking of inflammation, a study by Petrocellis et al., published in Acta Physiologica in February 2012, had fascinating results. It found that CBDV could dramatically decrease the gastrointestinal inflammation that accompanies diseases such as inflammatory bowel disease, Crohn’s, and irritable bowel syndrome.

Related article
CBD for Crohn’s Disease [Does It Work?]

CBD to the rescue…

CBDV as an Anti-Nausea Agent

A study by Rock et al., published in the British Journal of Pharmacology in October 2013, looked at the effect of CBDV on rats with nausea. The researchers found that CBDV probably acts as an agonist on CB1 receptors, blocking the nausea response. Despite the positive results, however, the study also concluded that more research is needed to determine CBDV’s effectiveness.

Preliminary research into CBDV reveals that this cannabinoid could have an array of therapeutic effects. The fact that weed has been illegal all this time has set us back. Remember, researchers first discovered CBDV in 1969. However, there are few studies into its efficacy for treating the symptoms of conditions such as epilepsy before 2012.

Further research will hopefully show us that CBDV is a potentially useful form of alternative medication.

If this happens, we expect breeders to focus on developing high-CBDV strains as they did with CBD. At present, not many strains contain a reasonable level of CBDV; expect that to change shortly.

Now that the FDA allows its use, albeit, in a very limited sense, the future for CBDV looks bright.