At one time, your options for consuming marijuana broadly boiled down to smoking a joint or eating a hash brownie. These days, there are various tinctures, ointments, and gummies laden with cannabinoids. However, dabs are a form of weed gaining popularity as fast as anything on the market.

Weed dabs, a type of marijuana concentrate, are essentially an extracted form of dry herb which you can smoke or vaporize. Although you can learn how to make dabs with marijuana, it is often best to purchase concentrates from a reputable seller. Also, as the THC content is sometimes over 90%, we urge you to moderate your use at first and watch out for any dabbing side effects.

In this guide, we tell you what weed dabs are, how to make them, and how they work. We also provide you with a brief history of dabbing.

Are Dabs Related to Marijuana?

The simple answer is ‘yes.’ However, there is a significant difference in potency between dried weed and dabs. Brands that create dabs use marijuana flower or trim as their source material.

When harvest time arrives, growers remove plant material such as sugar leaves from the buds; this is called trim. However, making a stronger concentrate involves using marijuana flower and availing of its trichomes, which are high in THC. 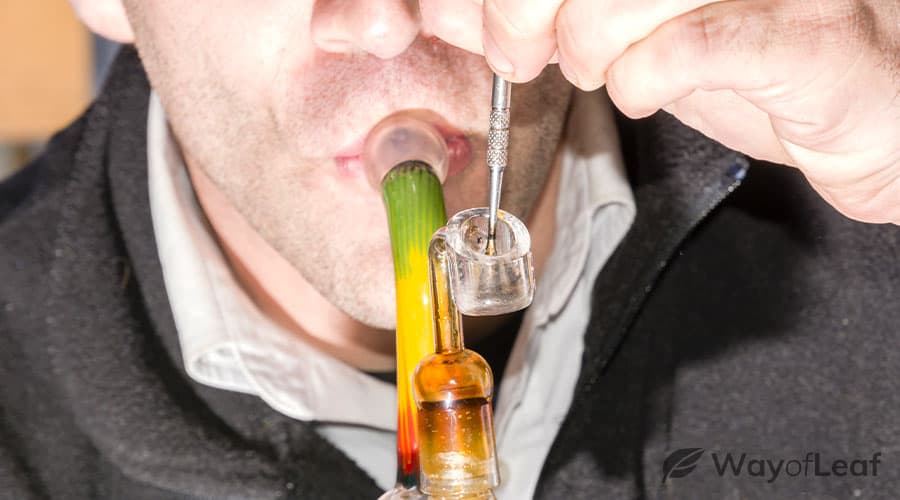 Manufacturers then place the plant material and a solvent into a closed-loop system for several hours to create a slurry-like substance. The solvent removes the trichomes from the plant matter. Next, the company purges the solvent to ‘clean up’ the concentrate, which is removed from the machine.

Brands may also use winterization and dewaxing to remove fats, waxes, and plant lipids from the concentrate. Dabs created using these methods are clearer and more flavorful. There are various forms of dabs, which we outline below.

What Are the Different Types of Dabs?

Shatter: A semi-transparent thin sheet of concentrate that looks like amber glass. It is easy to break below room temperature, so be wary.

Butter: It looks a lot like peanut butter and is malleable because of its doughy consistency.

Oil: Also known as 710 or honey oil, this dab type is a thick liquid with an amber or dark gold color. Most oils are vaporized or smoked, but it is possible to eat some varieties.

Live Resin: This typically comes in oil form and is made from fresh plants that did not go through the normal drying process. While some users claim this is the ultimate dab, it is hard to find.

If you decide to dab, you should purchase some extra equipment. While you can use a normal weed bowl for dabs, buying a specific dabbing rig is best. When you dab, you place a concentrate on a hot surface and inhale the vapor created when the substance evaporates.

Here is a quick look at the devices you can use when dabbing.

Also known as a dab rig, this is the classic piece of dabbing equipment. It is a water pipe specifically designed for concentrate use and consists of a nail, dome, and holder. You place the concentrate in the holder, heat the nail with a torch, and set the dome in place. Once the red-hot nail makes contact with the concentrate, a vapor is created, which you then inhale.

There are also all-in-one rigs known as domeless nails, which are essentially the same as typical rigs. The main difference is that you don’t have to remove or replace the dome.

There are various vaporizers, ranging from expensive desktop models to cheaper vape pens. Regardless of the type of vaporizer, they all have a heating element that heats the concentrate to the correct temperature. They are best used with wax, shatter, or oil.

These are designed to combine the benefits of water pipes and vaporizers. You load the dab in an atomizer, and the battery-heated device warms the concentrate to the point where it gets vaporized. Then, you inhale the vapor like you would from a water pipe.

A Brief History of Dabs

People have likely used THC-laden concentrates for at least 2,000 years. Most experts now believe that the “dab” originated in Eastern Asia before spreading to Nepal, India, and the Himalayas in 100 CE. In the modern era, a group known as the Brotherhood of Eternal Love (based in California’s Orange County) began using butane hash oil extractions in the late 1960s. This concentrated form of weed was also known as honey oil.

It’s believed that THC-laden concentrates have been used for at least 2,000 years.

However, the first proper dab rigs were not created until the 21st century. Some sources suggest these rigs were created as early as 2005, but most marijuana historians suggest the first true dab rigs were unavailable until 2010. California is sometimes called the home of dabbing, and today, hundreds of thousands of people consume cannabinoids in this manner.

Can You Overdose on Dabs?

To date, no reliable reports state that anyone has ever overdosed on marijuana. However, this doesn’t mean the substance is completely safe either. It is possible to consume such a high THC level that you experience hallucinations. Your reaction to these effects could place you in significant danger. There ARE reports of people overusing marijuana and subsequently suffering a tragic accident.

Certainly, it is possible to experience the following adverse effects from excessive usage of dabs:

There are now dabs in the market with a THC content of over 90%. This is approximately quadruple the THC level of ‘potent’ marijuana flower. Apart from the general strength, those who dab will tell you that the effects hit incredibly quickly.

Related article
Why Do Some People Become Paranoid After Using Marijuana?

A rice-grain-sized dab could contain a similar amount of THC as an entire joint. The difference is that the intoxication hits you all at once. It is a sensation not unlike consuming shots of vodka or another highly intoxicating spirit.

Ultimately, while you technically won’t ‘overdose’ on dabs, you could suffer from a great deal of discomfort if you fail to use them sensibly.

Also, according to a study by the National Institute of Drug Abuse (NIDA), regular dabbing could result in more severe withdrawal symptoms and greater THC tolerance than the consumption of marijuana flower.

Generally speaking, if you dab weed safely and sensibly, you could have an enjoyable experience. However, there are potential health risks associated with these products.

First and foremost, please ensure you purchase concentrates from a reputable source. Brands of dubious repute may utilize a solvent such as butane during the production of the dabs. In this instance, users inhale the butane gas while consuming the concentrate.

A study published in Emergency Medical Journal in 2005 outlined the dangers of solvent abuse. Side effects of butane inhalation, accidental or otherwise, include nausea, headaches, confusion, and muscle weakness.

For your safety, make sure the dab seller provides updated third-party lab reports with every product.

Disturbingly, a study published in the Journal of Toxicological Sciences in 2015 found that up to 80% of the concentrate samples tested by researchers were contaminated. For your safety, make sure the dab seller provides updated third-party lab reports with every product.

Even the process of consuming dabs has its risks. After all, the rig’s nail can exceed 600 degrees Fahrenheit. A brief accidental touch could result in a highly unpleasant sensation! This is another reason why you should NOT get excessively intoxicated while dabbing.

As an aside, it is a terrible idea to try and make dabs at home, especially using liquid butane. It is a substance that can explode if mishandled. There are several reports of people being seriously injured and even dying while attempting to create dabs using a highly flammable solvent.

The simple answer is: yes, they should be. Top-shelf dabs’ flavor will taste like the marijuana strains they are extracted from. Dabs can sometimes taste like vaporized weed, and they should always have a taste like marijuana. Here are a few things to look out for when sampling dabs:

Aroma: Make sure the concentrate has a weed-like smell. If there is no obvious scent or it emits a foul, pungent odor, steer clear.

Texture: Good hash oil has a syrup-style texture, while concentrates that are ultra-high in cannabinoids are crystalline.

Appearance: The best forms of shatter will resemble stained glass, while crumble has a honeycomb look. Hash oil should resemble light maple syrup.

Taste: Good dabs taste like weed; full stop! If they taste like solvents, you have a bad-quality product in your hands and are potentially risking your health by inhaling it.

Concentrates are extracted from marijuana flower and are significantly more potent than dry herb. You can purchase shatter, wax, crumble, or oil and use a dab rig or vaporizer to consume it. Some users like to roll some dab on their joint for an extra kick. If you use a rig or vape device, you inhale the vapor, whereas smoking marijuana combusts the plant matter and is harder on the lungs.

Although cross-breeding has created some potent flower, the effect of dabs is far stronger than those provided by marijuana. Proponents of both forms of weed make pretty good points. Let’s look at the pros and cons of dabs compared to dry herb.

There is no clear winner in the dabs vs. marijuana flower competition that everyone appears to be talking about. We can tell you that dabs are incredibly powerful and could result in unpleasant and potentially dangerous adverse effects if used improperly. NIDA suggests that dabbing may increase the risk of severe withdrawal symptoms due to the high THC content.

Concentrates offer a fast and potent way to consume marijuana, and these weed dabs are becoming bestsellers despite the risks.

It is up to you to decide if you want wax, oil, butter, shatter, or resin to dab with. We also recommend paying for a high-quality dab rig or vaporizer to get the very best out of your concentrates.

However, please be careful when using dabs because they are far more potent than anything you have ever tried before. Regular dab use could increase your THC tolerance rapidly, meaning you need to consume increasing amounts to feel the same effects as before.

An alternative is to dab CBD instead. It is non-intoxicating, and reputable brands such as CBDistillery  sell various powders and isolates that work well with a dabbing rig.

Related article
These Are the Best Torches for Dabbing [2022 Update]

Our top torches to use at home…