Pain and inflammation are part of life. So if you’re someone who struggles with pain often, then ibuprofen is probably a good friend of yours. In recent times, however, more and more folks are turning to CBD oil to help manage pain in a more natural way.

Therefore, this raises the question – can CBD oil be taken with ibuprofen?

CBD Oil vs. Ibuprofen: How Does Ibuprofen Manage Pain?

Ibuprofen is one of the most common non-steroidal anti-inflammatory drugs (NSAIDs), first discovered in 1961. Today, it’s an active ingredient in numerous over-the-counter pain-relief drugs, including household names like Motrin and Brufen. Ibuprofen is very effective at eliminating most forms of pain that result from inflammation. It also works well as a fever reducer.

Ibuprofen works by blocking a specific type of hormone known as prostaglandin. Unlike normal hormones, prostaglandins are not secreted by any gland. Instead, they form via chemical reactions at the site where they’re needed. Typically, this is a site where there has been an infection or tissue damage (hence the resulting pain, inflammation, etc.).

Ibuprofen limits the number of enzymes produced by cyclooxygenase-2 (COX-2). This results in decreased prostaglandin release when the body experiences injury, leading to lowered inflammation and pain.

It’s important to note that ibuprofen comes with some potential side effects. Some of these include dizziness, high blood pressure, and ulcers (stomach bleeding).

Cannabis has been consumed for centuries to help alleviate pain, and now scientists are aiming to find the link between cannabinoids and their anti-inflammatory and analgesic (pain-relieving) potential.

As one of more than 100 cannabinoids found inside the cannabis plant, CBD offers many potential health benefits without causing users to feel high. The primary difference between CBD and ibuprofen is how they interact with pain response pathways. For example, CBD interacts with CB2 receptors, while ibuprofen blocks the COX-2 from producing extra prostaglandins.

The analgesic mechanism of CBD is complex and not as well understood as that of ibuprofen. However, it appears to offer pain relief by inhibiting the action of neurotransmitters.

Although CBD interacts with pain response pathways in a unique way to ibuprofen, it appears to have similar pain-relieving properties.

According to a 2018 publication in Frontiers of Pharmacology, cannabinoids (like CBD) have an inhibitory effect on neurotransmitters and neuropeptides that are involved in the “activation of descending inhibitory pain pathways, [as well as] reduction of neural inflammation.”

So, as you can see, the differences between CBD and ibuprofen for pain relief are quite distinct. Of course, ibuprofen and CBD are often not enough by themselves to combat pain completely. This leads many to want to use the two drugs in combination. But is using ibuprofen and CBD oil together safe?

How Does CBD Interact with Ibuprofen?

Currently, not much is known about how CBD could interact with other medications – including ibuprofen. More research is needed, but research has shown that CBD poses inhibitory action on some enzymes that galvanize drug metabolism.

Therefore, the risk of experiencing adverse side effects linked to ibuprofen use may increase when a person takes the drug in conjunction with CBD. 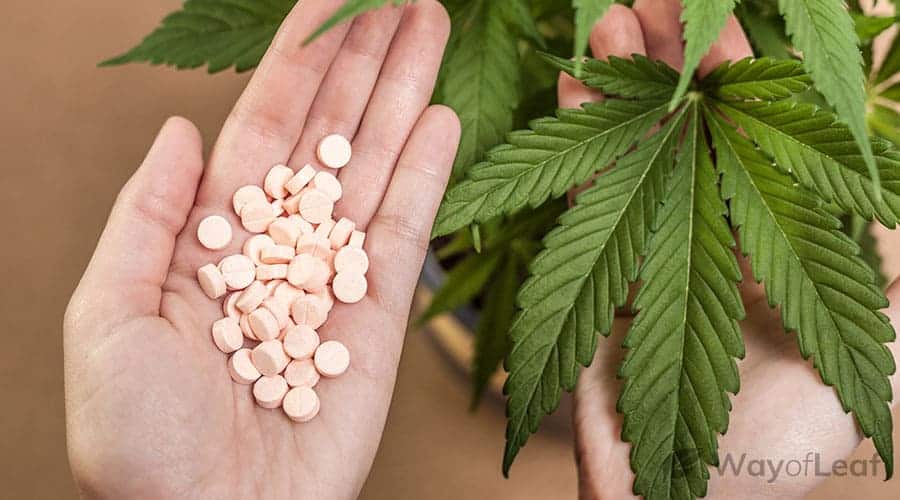 When looking at CBD drug interactions, there are two basic categories:

Ibuprofen falls into the second category – you should be cautious when using it together with CBD because they are both metabolized by the same process in the liver. Since taking both may either increase or decrease their concentration depending on how quickly liver enzymes can break down each drug, the overall effects of the ibuprofen may be reduced or intensified.

The time that you take both CBD and ibuprofen may influence how the two drugs interact in your body. Spacing out doses of medication helps to reduce the workload on the liver.

For instance, depending on a drug’s half-life (and the dose of the drug), it has the potential to inhibit liver enzymes for a variable timeframe. Therefore, liver enzymes could regain sufficient function by the time the person takes the second drug.

The risk of experiencing adverse drug interactions may be lower if you consume ibuprofen and CBD at different times of the day.

The dosage used may also have an effect on any potential interaction of ibuprofen with CBD. When a person uses large amounts of CBD and ibuprofen together, there may be an increased risk of danger (such as increased stomach bleeding). Some medical experts have speculated that taking low amounts of CBD doesn’t seem to affect the way the liver metabolizes ibuprofen.

Of course, it’s worth noting that everyone responds differently to drugs. Some individuals may be sensitive to certain substances, while others may have little to no reaction. Ultimately, how the body processes medication – and its effect – is very much influenced by genetics, body size, age, and so on.

Final Thoughts on CBD and Ibuprofen

While taking low amounts of ibuprofen and CBD will likely not produce severe adverse effects on the body, more research is needed on the topic. In addition, due to interaction with enzyme activity, there is the potential that CBD may either intensify or reduce the effects of ibuprofen.

Ultimately, it’s best to consult with a doctor or healthcare provider before using CBD oil in conjunction with ibuprofen. They will help you decide whether it’s safe to use CBD oil and may also be able to offer medical advice regarding the dosage of CBD oil that may be effective without causing any adverse effects.

Related article
CBD Oil vs. CBD Topicals for Back Pain – Which Is Best?

Do You Need a Prescription for CBD Oil?

Confused by CBD laws? You're not alone...

CBD Oil Samples – Watch Out for This Common Trap

What Is Rick Simpson Cannabis Oil – and How Do You Make It?

21
9 min read
Join the discussion
TOC
Premium
Your subscription has ended
If you love cannabis and appreciate our content, join WayofLeaf Premium today and receive:
Best of all, part of your membership fee will go towards helping to legalize cannabis.
Go Wayofleaf Premium
No thanks, I can't afford it
I already have an account
×
Login in to your premium account