Written by Editorial Team
5 min read
7 comments
Read Later
All information on this website is for general informational purposes only and is not intended or implied to be a substitute for professional medical advice, diagnosis or treatment.
Wedding Crasher Strain Overview
Contrary to its name, the Wedding Crasher strain will not put you in the mood to crash any weddings, but rather to crash on the couch. It can help with sleep and provide a spacey and cerebral high that will have you sedated in no time. In addition to its dreamy and mellow high, it has a delicious wedding cake and grape/vanilla flavor that is to die for. 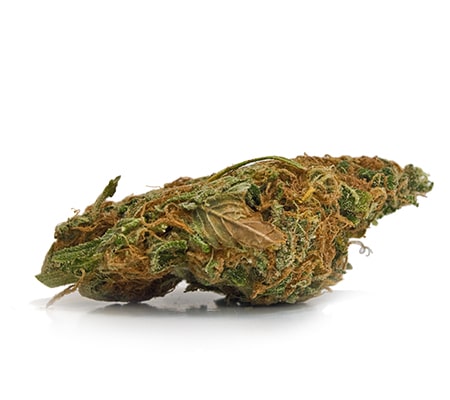 The Wedding Crasher strain is one of those strains that amalgamates the properties of a few popular phenotypes in an (assumed) effort to create something that’s better than the sum of its parts.

In reality, what’s produced is a mildly unique spin on Wedding Cake and Purple Punch – you should be able to notice a hint that famous vanilla sweetness of Wedding Cake, while the berry aftertaste from Purple Punch is pretty obvious as well.

But what makes the strain unique? What’s the high like? What kind of medical ailments would it be good for treating? Is it easy to grow? Find out all the answers to these questions and more in our complete Wedding Crasher marijuana strain review.

What Is Wedding Crasher Cannabis?

Like we said in the intro, Wedding Crasher weed is a strain bred from Wedding Cake (a hybrid), and Purple Punch – a relatively popular indica flower that is one-half Granddaddy Purple and one-half Larry OG. (So funny as it may be, you could legitimately say that Grandaddy Purple is actually a “botanical granddaddy” of Wedding Crasher).

Symbiotic Genetics is generally credited as the mastermind breeder behind the Wedding Crasher strain. They conceived the great idea of combining two relatively sweet and fruity flavors. This produced a solid blend of (mostly) indica-dominant traits.

From a genetic perspective, Wedding Crasher weed is classified as a hybrid. Nevertheless, its indica-specific traits could rank in as high as 45% or so. (Looking at the flower and/or the entire plant of a specific crop would help give you a better idea of the indica profile).

We’ve seen Wedding Crasher weed with THC content upwards of 20%, but again, this is something that will vary slightly from flower to flower. It doesn’t have a high CBD content though, so be advised that it will produce a pretty legit high. One commenter on Leafly even said it made him feel like Batman. 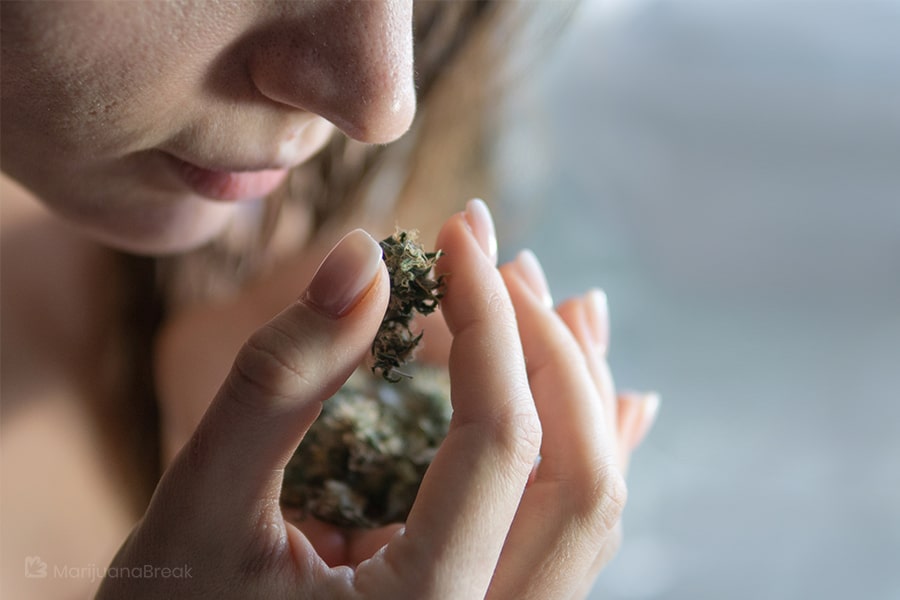 Have any experience with Wedding Crasher’s parent strains – Wedding Cake and Purple Punch? If so, you should be able to get a pretty good idea of the aroma and flavor profile that you’ll be dealing with when you toke up a healthy dose of this hybrid flower.

In our experience, the grape hit of the Purple Punch is a bit more noticeable than the vanilla from the Wedding Cake, but if you’ve got even a slightly discernible palate you should be able to identify both. All in all, what you’ll be getting is a more-than-mildly-sweet hit, with a nice berry aftertaste. A pretty enjoyable strain if you’re into the fruity-flavored stuff.

In terms of aroma, you can pretty much guess what kinds of scents will be flooding your nostrils when you chirp out on a decent cultivate of Wedding Crasher weed.

Unless your sense of smell is entirely off-key, you should be able to detect a very obvious berry scent. This grape smell overpowers pretty much everything else.

As far as general visual appeal, the Wedding Crasher strain is nothing that will really catch your attention too much. The phenotypes we’ve seen have generally been pretty frosty with a lovely trichome presence, as well as healthy-looking pistils that nicely counterbalance the earthy-green tint of the sugar leaves.

We have seen a couple of buds with a decent smattering of purple. Really all this means is the CO2 levels were probably slightly elevated during the growing process. (Contrary to popular belief, purple marijuana does not constitute heightened potency. Any strain – and in fact, any flower for that matter – can develop purple leaves if the anthocyanin presence is stronger than the chlorophyll presence).

You won’t find a ton of information out there in regards to how to grow Wedding Crasher marijuana. Be advised that it will probably take on the characteristics of most any hybrid grow you’ve done before.

By that, we mean it should have a mid-range flowering time of about 9-10 weeks and grow equally well in either soil or hydroponics (depending of course on the quality of operation you set up and maintain).

Like most hybrids, Wedding Crasher cannabis will prefer temperatures in that traditional 60:70:85 range.

Don’t expect too monstrous of plants to pop up if you try and grow Wedding Crasher marijuana. The healthy presence of indica genes should maintain that the adult females are nice and robust but not overly tall.

Wedding Crasher Strain Review: What About the High?

In terms of the high that Wedding Crasher weed produces, it’s a damn good one. It doesn’t have that “stoning” effect of a full-on indica. The “professional balance” that exists between the sativa and indica lineage produces a mostly-cerebral high that is at once invigorating. At the same time, this strain still maintains a traditional “spacey” element to it.

Also, a lot of folks say they feel a certain level of mental fortitude. After toking up a decent specimen of Wedding Crasher nuggets, some describe an increase in confidence. It sounds odd to say that a weed strain will promote “confidence,” but hey, we’ve heard of stranger things.

In our experience, the high is more sativa-dominant than indica-dominant, which is odd because most of the other traits of the plant seem to have a very obvious “indica appeal.” I personally prefer that spaciness of potent sativas, and Wedding Crasher provides that nicely while still maintaining a clear-headed and easily-manageable cerebral state.

All in all, the flower provides a wonderful high that is neither too anxiety-inducing nor too sedative. It won’t melt your body away along the lines of something like Northern Lights, but it will definitely be enough to chill you out while still encouraging an element of psychoactiveness and creativity.

Wedding Crasher weed isn’t a strain too often used for medicinal purposes. Simply going off of its cerebral and physical effects we would reckon it would work wonders on folks who suffer from migraines, arthritis, and even chronic body pain.

Since it lacks the sedative punch of a full-bore indica it probably wouldn’t be the best sleep-inducing option for victims of insomnia or anxiety, but still – we could easily see it being effective to help deal with mild bouts of stress, depression, and even fatigue.

This strain has the universal side effects that you’ll get with most any marijuana strain on earth (dry eyes, cottonmouth, etc.) The Wedding Crasher strain doesn’t really do anything too noteworthy on the “negative” effects spectrum.

It won’t give you that racing heart or nervy aura that some super potent paranoia-inducing sativas do, and in our experience we can’t really see it knocking you out on your ass and succumbing you to hours and hours of couch lock either.

All in all, just have a bottle of water with you and some eye drops on hand when you smoke Wedding Crasher cannabis, and you should be OK.

Oh, and if you’re the kind of person who gets wicked bouts of the munchies, be sure to have a few bags of Doritos and Ho-Ho’s around (and maybe a pepperoni pizza or two), as this strain will light up your appetite like the Fourth of July.

All in all, we would reckon that Wedding Crasher weed is a strain definitely worth trying. Especially if you can get your hands on it. It’s not something that any dispensary on earth will have on hand. Additionally, it’s probably not really worth calling around to try and find. If, however, you happen to see a jar of it in your go-to shop around home, pick up a gram and try it out. (And if you do, be sure to let us know what you thought of it in the comments below!).

We hope you enjoyed this Wedding Crasher strain review. If you’re a fan of either Wedding Cake or Purple Punch (or both), you’ll surely enjoy the concoction of cerebral effects that this pretty little hybrid flower produces.