Written by Editorial Team
5 min read
0 comments
Read Later
All information on this website is for general informational purposes only and is not intended or implied to be a substitute for professional medical advice, diagnosis or treatment.
Raspberry Kush Strain Overview
Raspberry Kush is an indica strain (75% indica / 25% sativa) with a THC range of between 16 - 20%. It was named after its scent that is reminiscent of sweet raspberries and creamy yet spicy undertones. 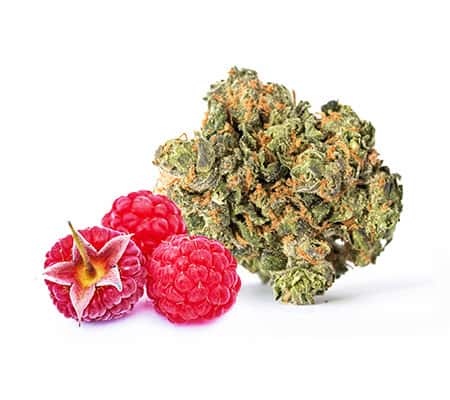 Flavors
Earthy
Raspberry
Sweet
Common usage
Chronic pain
Depression
Lack of appetite
Migraines
Effects
Creativity
Euphoria
Relaxation
Growing info
Raspberry Kush grows to a medium height and thanks to its hardy nature can be grown both indoors and outdoors. It has an average flowering time of 9-10 weeks. BUY SEEDS FOR THIS STRAIN AT OUR #1 RATED ONLINE SEED STORE: HOMEGROWN
THC
16%
CBD
1%
Sativa
25%
Indica
75%

Raspberry Kush is a delicious strain with disputed origins that has risen to fame thanks to its lighthearted nature. It’s the perfect sweet strain to end off your night, but can be quite potent, especially if used in large doses. In most cases, you can expect a mind-numbing and soothing high that will make your world seem brighter.

Although no one actually knows where the Raspberry Kush strain came from, it’s managed to make its way into the hearts of Kush fans all over the West coast. With pleasant, sedative effects, and an uplifting mental high, this strain is one of the most popular Kush hybrids in the cannabis world.

It’s a potent strain that will make you feel euphoric, ensuring you feel a fun rush of euphoria as you experience your high. Raspberry Kush is said to be a smoking experience like no other, with it’s pleasant and uplifting mental effects that last for hours.

What Is the Raspberry Kush Strain?

Raspberry Kush is an indica-dominant hybrid strain consisting of 75% indica and 25% sativa properties. It was named after its raspberry aroma and flavor, which keeps users coming back for more. The genetics of this mysterious strain is unknown, but it’s suggested to have been derived from one of the Cheese Kush strains and Raspberry Cough.

The original lineage of Raspberry Kush comes from the Hindu Kush mountain range that extends between northern Pakistan and Afghanistan. Featuring a heavy body sensation, and a happy, creative head high, it’s an all-around pleasant and authentic indica strain. 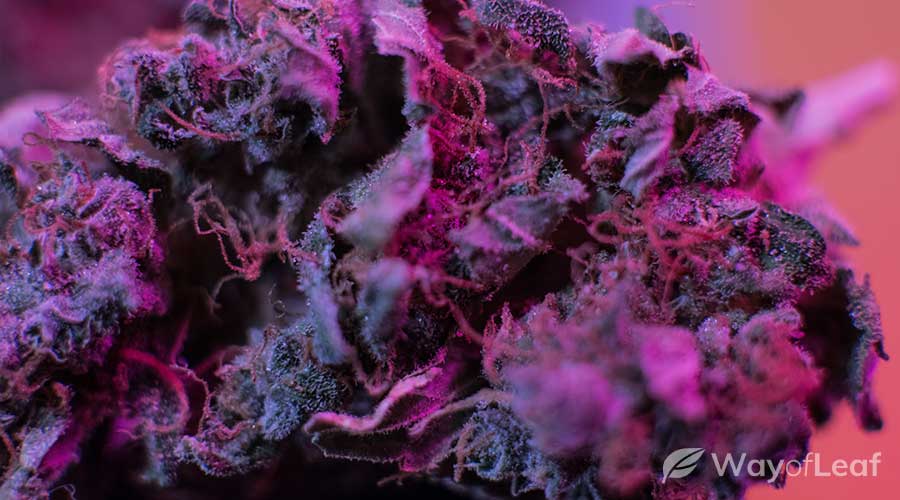 With an average THC level of around 16%, Raspberry Kush promises a long-lasting effect on the body and mind. The high is known to start in the head, slowly spreading throughout the body and relaxing the muscles – as many indicas tend to do. It also produces cerebral effects that make social events seem more pleasurable. In fact, the strain is often consumed at parties and social events to help strike up conversations.

Raspberry Kush can even make the tensest person feel soothed and relaxed and invigorated thanks to the pleasant effects it has on enhancing one’s senses. It’s ideal for days when you just want to feel carefree and happy. Some users also report experiencing a boost in energy after smoking Raspberry Kush.

Artists love this strain for its creative properties, helping them to come up with more inspired ideas than on your average day. Raspberry Kush can also make you feel sleepy in high doses, relaxing users from head to toe. The sleepiness usually comes once the high melts off, so afternoon or evening use is best.

Harcore kush fans will find Raspberry Kush to have a very recognizable scent. It will fill your surroundings with a strong earthy smell that is bound to make you crave more, with the mouthwatering Kush notes that make your nose tingle. You can also expect strong hints of berries and cream.

As you may have guessed, Raspberry Kush has a sweet berry flavor. It contains sweet vanilla notes, combined with earthy goodness on the inhale. The exhale smoke has a creamy taste and is known to leave a light but sticky flavor on the tongue.

Raspberry Kush features deep, dark green buds with hints of purple that are frosted with crystalline trichomes. The buds are dense, tightly formed nugs, and have an array of orangish-brown hairs intertwined throughout.

Raspberry Kush grows to a medium height, and thanks to its hardy nature can be grown both indoors and outdoors. Outdoors, the strain likes a sheltered spot but craves a lot of sunlight. When grown indoors, a soil or hydroponic system works best for growing Raspberry Kush and can lead to high yields.

Raspberry Kush grown indoors has an average flowering period of 9 – 10 weeks. The strain can yield approximately 16 ounces of fresh buds during harvest.

This hybrid strain loves a sunny spot in outdoor environments and yields approximately 12 ounces of bud per plant. You can expect Raspberry Kush to be ready for harvest from mid to late October.

On average, Raspberry Kush contains between 16 – 23% THC, with 23% being the highest possibility. Due to the high THC levels, it’s recommended for moderate to experienced cannabis users. This strain is potent enough to cause a solid couch-lock.

Raspberry Kush contains minimal traces of CBD. In fact, there’s no indication that it even has as much as 1% CBD – the CBD content is close to being non-existent.

Raspberry Kush is a great choice for those looking for some medical help. It can make patients feel relaxed, happy, creative, and focused. Furthermore, a sense of euphoria brought on by this strain may be helpful to those who struggle with anxiety and depression related to disorders like PTSD. It also has sedating effects, which may be beneficial for people who have trouble sleeping.

Raspberry Kush is also known as a great option for patients who suffer from chronic pain. The strain may help to numb pain associated with muscle spasms, backaches, and arthritis, but is especially effective in the treatment of headaches and migraines.

The Raspberry Kush strain induces relaxation, which means it may help to mitigate stress. It’s also been found to relieve muscle spasms, lack of sleep, inflammation, and irritability – helping patients find a more natural way to achieve a relaxed state. Also, since it can cause an intense case of the munchies, Raspberry Kush may be helpful to patients who are in need of an appetite boost.

Possible Side Effects of the Raspberry Kush Strain

Raspberry Kush has a few potential side effects, which is to be expected from any potent strain. It will definitely leave you feeling a bit parched, with a dry mouth and dry (sometimes itchy) eyes, which is more likely to occur when used in high doses.

In some instances, Raspberry Kush may leave you feeling dizzy due to the high THC levels. In rare cases, you might feel a bit paranoid, which can be accompanied by a headache. For this reason, it’s best to keep the dose at a reasonable level – especially if you are prone to feeling overwhelmed with stronger strains.

Anyone who enjoys experimenting with delicious, cannabis-infused desserts will love Raspberry Kush. The aroma and flavor of this strain are one of the main reasons that it’s loved by so many. The euphoric and uplifting effects is another reason users are drawn to Raspberry Kush.

The effects of Raspberry Kush start in the head and gradually spread throughout the body, giving users an energizing boost. It’s a great strain for relaxing after a long day and can also be perfect for weekend hangouts and parties.

Raspberry Kush is a sleepy strain that is best used in the evening. However, although it produces a deep and physical relaxation, it also offers a surprisingly upbeat mental experience. Novice consumers should go slow with this bud, as it’s known to be potent.