Written by Editorial Team
4 min read
3 comments
Read Later
All information on this website is for general informational purposes only and is not intended or implied to be a substitute for professional medical advice, diagnosis or treatment.
Purple Trainwreck Strain Overview
The Purple Trainwreck strain is an evenly balanced hybrid that offers its consumers the best of both worlds. This strain just might be as fragrant and tasty as it is stunningly beautiful! 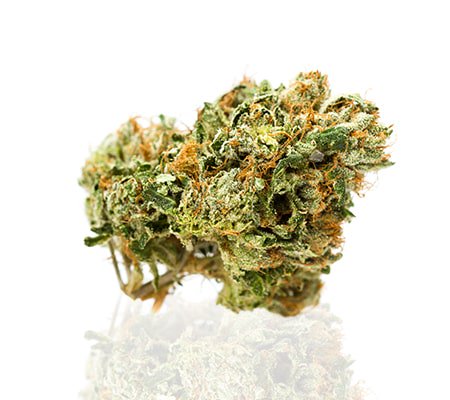 If you are seeking a pick-me-up, then look no further than the Purple Trainwreck strain. Purple Trainwreck also carries the nickname ‘Granddaddy Wreck,’ but unlike the sobriquet, this strain boosts your mood and stimulates creativity. In other words, it doesn’t turn you into a wreck. Instead, it may even help you feel better if you already feel wrecked.

What is Purple Trainwreck?

Purple Trainwreck is a hard-hitting marijuana strain that is classified as a ‘well-balanced’ hybrid due to its 50:50 sativa and indica genetics. With the Purple Trainwreck strain, consumers get to experience the best of both worlds.

This strain was created by the Humboldt Seed Organization and is a cross of Trainwreck and Mendocino Purps. It has a powerful THC level that can hit the heady heights of 26%. The strain’s genetic makeup is an intriguing mix of Afghani, Thai, and Mexican strains. These strains have been beautifully combined to create a fantastic strain which may prove beneficial to medicinal marijuana consumer.

The ‘Trainwreck’ part of the name gives you a fair idea of what to expect. Just like a high-speed train, Purple Trainwreck is exceptionally potent and fast-acting. But instead of succumbing to a sleepy stupor, you will feel energized.

Purple Trainwreck is widely regarded as one of the best ‘social’ smokes out there. It makes you feel a bit hyperactive initially, before later settling you down nicely. Users often find themselves being more talkative than usual, and they even burst out laughing for no particular reason.

There is no question that high doses of Purple Trainwreck provide you with a heavy body high after a while. After experiencing an incredible burst of euphoria, you suddenly feel calm and relaxed. Moreover, your mood is significantly boosted to the point where you feel positive about almost everything.

If you need something to boost your mood, there are few better strains on the market. Its potent effects mean you probably shouldn’t use it at work because you may find it hard to explain why you have a permanent smile etched on your face! However, after a hard day at the office, some Purple Trainwreck may make you feel better almost immediately.

According to some users, Purple Trainwreck provides them with about an hour of energy before its sedative effects kick in. Although its effects will vary, make sure you’re close to home when using this strain.

Users will immediately fall in love with the strain’s gorgeous, sweet smell, which can fill an entire room with a mouth-watering herbal and berry aroma. There are hints of fresh pine and grape, with a generally robust and fruity smell.

Purple Trainwreck consumers will also enjoy the potent taste of herb, with highlights of berry and grape. When you exhale, the woody and sweet flavor linger long on the tongue. This strain’s pleasantly sweet and herbal aftertaste allows you to savor Purple Trainwreck for a little while longer.

As you can probably tell from the name, Purple Trainwreck consists of purple buds with dark red hairs. A Purple Trainwreck plant is arguably as beautiful as it is fragrant. With its bright green and magenta hues, this strain boasts striking and eye-catching good looks.

This is a strain associated with high yields, and it also grows exceedingly tall. As a result, if you decide to grow Purple Trainwreck indoors, make sure you train the plants. If you don’t, they may stretch too close to your lighting system and suffer from light burn.

Overall, a Purple Trainwreck plant is suitable for novice growers. It has a high resistance to mold and mildew, which means it is more forgiving of rookie mistakes.

When you grow Purple Trainwreck indoors, it can provide a yield of up to 18 ounces per square meter planted. Purple Trainwreck’s flowering time ranges from 9 to 11 weeks. Purple Trainwreck is a strain that’s easy to grow outdoors, particularly if you live in a region with a warm and dry climate with minimal frost. It can produce a whopping 25 ounces per plant outdoors and is ready for harvest in mid-October.

Purple Trainwreck is a widely used marijuana strain in the medical field due to its versatility. As it is a balanced hybrid, users get the best of indica and sativa effects. For example, you can use Purple Trainwreck if you have chronic stress or general mood disorder. It could also potentially be useful for other mental health problems such as anxiety and depression.

If you suffer from joint aches or muscle pains, Purple Trainwreck could provide relief due to its purported anti-inflammatory properties. As well as potentially providing relief for patients with headaches or migraines, you could also use this strain if you have trouble sleeping. However, you may need to consume a little bit more of this strain if you are taking it for insomnia. If you are considering using the Purple Trainwreck strain for any medical condition, it is advisable that you discuss it with your health care professional first.

There is also a possibility of experiencing itchy eyes or a dry mouth. In rare cases, users report dizziness and headaches.

Overall, Purple Trainwreck is slightly different from its parent, Trainwreck, because of its infusion with Mendocino Purps. One of the noticeable aspects of this combination is the enhanced purple tint along with the sweet berry flavor that you don’t necessarily taste when using Trainwreck.

Also, this strain provides a considerably larger uplifting feeling than what is usually associated with weed of similar lineages. As a consequence, Purple Trainwreck could be one of the best marijuana strains out there for dealing with chronic pain.

If you use a vaporizer, you will also notice that the strain produces a thick and tasty vapor. Vaping this strain will send you into a land of tranquility at lightning speed. It has become one of the most popular strains for people who suffer from chronic pain and prefer to vape their cannabis.

Once you come home from work, light up a joint or bowl or switch on your vaporizer. Sit back, and relax, because Purple Trainwreck may elevate your mood and allow your stress to melt away.