Written by Editorial Team
6 min read
0 comments
Read Later
All information on this website is for general informational purposes only and is not intended or implied to be a substitute for professional medical advice, diagnosis or treatment.
Pitbull Strain Overview
Pitbull is a strong strain with a tantalizingly fruity flavor. Imagine tropical pineapple and citrus. The smoke creates a delightful indica high that makes you feel euphoric and relaxed, ready to take on the world. 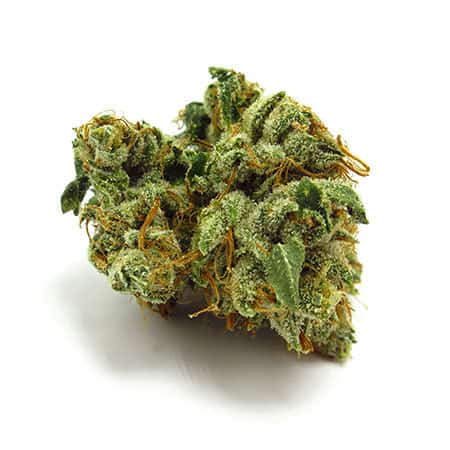 If you’re looking for a powerful and unrelenting indica high, then the Pitbull strain could be the one for you. There is lots to love about this strain, but not many people know all the details of it.

Here at WayofLeaf, we like to let our readers know what they can expect before they toke up, and give them an indication of what to look for in the dispensary. We have tons of strain reviews, and today we are investigating the Pitbull strain. This indica offers up a delightful fruit flavor profile and some amazing sedative effects.

Could Pitbull be the perfect strain for you? Let’s find out.

What Is the Pitbull Strain?

The Pitbull strain is an indica-dominant hybrid, with just 20% sativa genetics. Stoney Girl Gardens bred this strain back in the 2000s by crossing P91 and Sugar Plum. On the P91 side, Pitbull can be traced back to an Afghani landrace strain, giving this strain strong genetics.

As a breed of dog, pitbulls have become somewhat infamous for their tenacity and power; many also believe them to be aggressive. Pitbull weed is not at all aggressive, nor will it make you feel aggravated. However, it does provide persistent effects and a strong high. Contrary to aggression, though, the Pitbull strain will have you settling down to sleep as it runs its course. 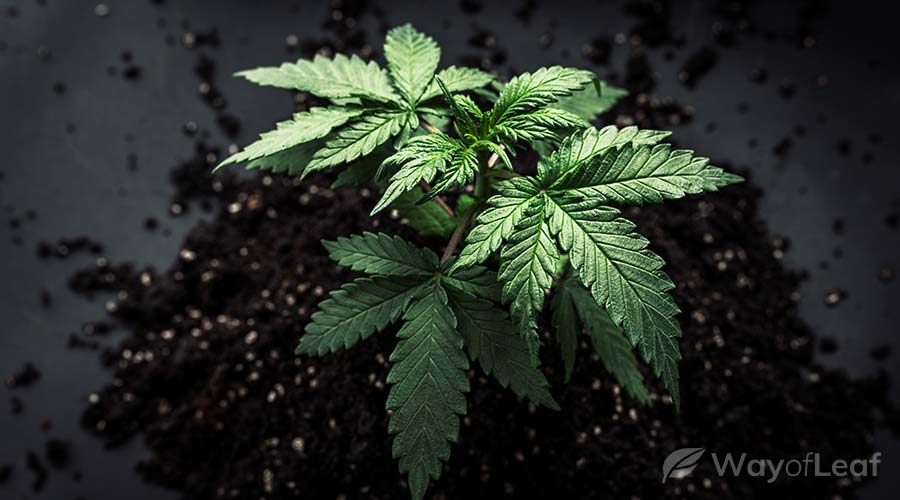 As a primarily indica strain, Pitbull offers insane levels of relaxation. The sativa touch also provides a head high, even though most of the effects are focused on the physical. Shortly after smoking, you will notice a euphoric sense of elation, with a smile plastered to your face.

It’s a good strain to use with friends, as Pitbull will give you a powerful dose of the giggles. By the way, some people experience some hallucinogenic effects as a result of this strain; you may experience visual and auditory distortions if you take too much.

The cerebral high gives way to total body relaxation and a numbing effect that will leave you stuck to the couch. Make sure you smoke up somewhere comfortable, because you won’t be getting up for some time. Pitbull’s numbing effects ensure that all pain melts away, while the euphoria squashes any worries. In the end, the high will leave you happy and relaxed.

At the very end of the high, you will fall asleep. There’s no way to fight it; Pitbull’s indica side is strong, leaving you too sleepy to fight it. The good news is that you’ll be falling asleep happy, with no care in the world.

The scent of the Pitbull strain is initially a typical marijuana aroma. However, on closer inspection, it’s a lot more complicated and pleasant. The primary scents are fruity, with an emphasis on tropical fruits like pineapple. In true cannabis fashion, there are also lots of citrus aromas.

Those with a keen nose will also be able to detect some lingering floral elements, with a lavender touch. Lavender’s scent comes from the terpene linalool, which is a known soporific. It’s likely that the Pitbull strain contains a decent amount of linalool, leading to its sedating high and the hints of flowers in its scent.

Just like the aroma, the flavor has a lot of pineapple elements. This is the primary flavor, along with a heavy citrus taste that lingers on the tongue even after you exhale. These fruity, tropical tastes make Pitbull a delight to smoke, leaving you eager to go back for more.

Pitbull also has a lot of earthy tones, probably thanks to its grandparent strain, Northern Lights. The earthy, herbal tastes root Pitbull more firmly in the cannabis world, reminding seasoned marijuana users of classic landrace strains like Afghani. Interestingly, Afghani is actually the great grandparent of the Pitbull strain.

The smoke is quite smooth rather than harsh, and so you can genuinely enjoy the fruity flavors that shine through.

By all accounts, the Pitbull strain is pretty regular looking. As an indica plant, it grows short and bushy, with some heaviness to the buds. Pitbull nugs are mottled green in appearance, with some orange pistils peeking through. It’s not particularly unusual in appearance, but the buds are extraordinarily large, giving it a little edge over some other plants.

You’re more likely to recognize Pitbull on account of its tropical smell rather than its appearance.

One of the most tenacious aspects of the Pitbull strain is the way it grows. Cultivators say that it can withstand a wide variety of environments, making it an easy strain to grow for newbies to cultivating. However, the breeders, Stoney Girl Gardens, haven’t specified what kind of environment is best for growing Pitbull marijuana.

When grown indoors, Pitbull flowers in between 6-7 weeks, providing up to 20 ounces of usable bud per square meter. Outdoors, you may be rewarded with 24 ounces – or more! – per plant. These buds will be ready by mid-September.

To begin growing this strain, you’ll need some Pitbull seeds. Stoney Girl Gardens have kept their cards close to their chests, and they don’t sell these seeds online. You can buy them in a few brick and mortar stores, but your best bet is to find some clippings and grow a clone.

That’s another reason why Pitbull is easy to grow; starting from a clipping means you can skip the risky germination and transplanting stages.

Pitbull has a relatively high THC content, with the average being 19%. That’s enough to get you decently high without overwhelming you, although newbies to cannabis should exercise some caution.

However, some Pitbull samples have tested at 25% THC, which is much stronger. As a result, you need to be careful how much Pitbull you use at any one time. Go low and slow, and only use more if you need to; otherwise, you run the risk of experiencing adverse side effects as a result of too much THC.

Like most high-THC strains, Pitbull has barely any CBD to speak of. The average is between 0.2-0.5% CBD, but some samples have contained 1%. This is pretty much the maximum, and therefore you can’t expect many of the CBD-induced effects that some people look for in cannabis.

Nevertheless, Pitbull has several medical uses on account of its numbing high and powerful indica genetics.

Medical Benefits of the Pitbull Strain

When the Pitbull high begins, it seeps into your brain, causing a significant wave of euphoria. The intense happiness will stop you from being worried or stressed about anything. Pitbull is effective for those suffering from mood disorders such as stress, depression, and anxiety. When high on Pitbull, you’ll be unable to think of anything but the positives in life.

However, the primary medical benefits of Pitbull are related to the body. Namely, the numbing body high of Pitbull will melt away all the pain you feel. Sufferers of chronic pain often use Pitbull as a way to combat constant aches. Whether your pain stems from inflammation with a condition like arthritis, or whether you suffer from a condition like neuropathy or fibromyalgia, Pitbull could be on hand to help.

In fact, some patients with inflammatory conditions like lupus and rheumatoid arthritis have found solace using the Pitbull strain.

Unsurprisingly, Pitbull is also used to combat insomnia. Since the indica effects will put you to sleep at the end of the high, it’s the perfect strain to help you when you’re struggling to drift off. Of course, Pitbull also combats both pain and stress, two ailments that can prevent you from falling asleep. So, no matter the source of your sleepless nights, Pitbull could be the ideal strain to keep on hand to help you get the rest you need.

By the way, some users also say that Pitbull can combat nausea. Whether you suffer from nausea as a result of medical treatments, PMS, or an underlying condition, keeping Pitbull on hand could be a way to make you feel better quickly and effectively.

Possible Side Effects of the Pitbull Strain

Pitbull can trigger the stereotypical marijuana side effects of dry mouth and dry eyes. We suggest keeping a large bottle of water on hand, because the couch-lock effects will render you glued to the couch, but the strain will make you super thirsty and leave you needing a drink. You don’t want to become dehydrated, so it’s best to be prepared.

Dry mouth and dry eyes are the two most common side effects people experience with this strain. However, some users also report feeling dizzy and anxious. Often, this stems from a low THC tolerance or using too much marijuana at once. Remember, some strains of Pitbull have a high THC level, and so using a lot of this strain can trigger paranoia and unwanted dizziness. As long as you stick within your limits, you should be fine.

Strangely, some female users report feeling tingly after using this strain. This isn’t always unpleasant, but it also isn’t a desired effect. Be aware that marijuana can cause strange consequences like this sometimes, so you should always go slowly.

Final Thoughts on the Pitbull Strain

The Pitbull strain is a classic example of an indica-leaning hybrid. It produces wonderful indica effects, causing you to feel relaxed and sleepy. However, it has just enough sativa genetics to trigger a euphoric head high and make you feel endlessly happy. Pitbull is the perfect strain to melt away your stress and allow you to truly wind down.

Use Pitbull in the evening to forget about the stresses of work and drift off to sleep happily. You’ll wake up feeling well-rested and ready to take on the world.

Another draw of Pitbull is that it tastes amazing, with delicious tropical fruit notes. You can enjoy the tantalizing citrus and pineapple flavors packaged in smooth smoke. Plus, Pitbull is easy to grow, so anyone can cultivate it.

Have you tried Pitbull before? We’d love to hear your thoughts. Let us know in the comments!