Written by Editorial Team
6 min read
0 comments
Read Later
Pink Kush Strain Overview
Pink Kush is an indica-dominant strain known for its body relaxing effects. It also boasts an uplifting and euphoric high, perfect for anyone looking to relieve stress and melt away their worries. 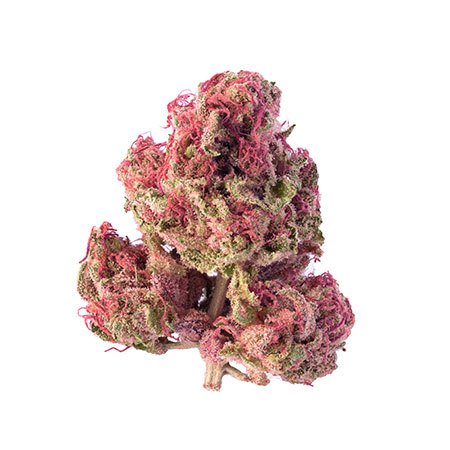 If you’ve been on the lookout for a strain that will help to ease your mind and unwind, Pink Kush may be your best bet. Though some of its heritage is shrouded in mystery, some cultivators believe it has some strong ties to OG Kush. Like OG Kush, Pink Kush has a long-lasting buzz that hovers for hours, and users describe it as pleasant and mellow, without a harsh edge. It also has a bubbly, uplifting high with a let-down that soothes aches and pains.

What Is the Pink Kush Strain?

Pink Kush weed is mostly indica. Strain experts contend that its indica dominance may run up to 90%. It does have an indicated sativa profile at 10%. Despite this low number, its sativa underpinnings help to boost its uplifting, happy, and euphoric effects.

Many users enjoy its vibrant and surprisingly sweet flavor. They also like its versatility. Consumers can use this strain in a variety of ways. Some tout its ability to soothe frayed nerves and ease them off to sleep.

Others indicate that they find it useful for assisting with back pains, migraines, and other aches. These sentiments fall in line with Pink Kush’s indica-leaning nature. Like some similar indica strains, it has some tendencies that make it a prime candidate for calming and soothing users. 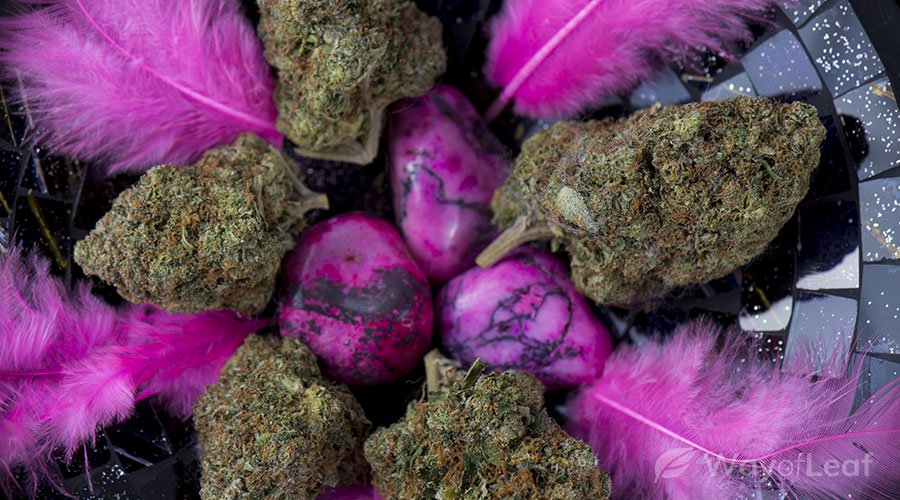 Users embrace this strain’s fun and refreshing side. It goes by a few names, including the Pink Cadillac strain, Pink OG, Pink OG Kush, and Pink Candy strain.

Those suffering from intense stress and anxiety cite that it helps to unravel tension, especially in regards to racing thoughts. The result is often a calmer and more tranquil feeling. Insomniacs find this aspect especially intriguing as many report the inability to stop their worries as a significant barrier to sleep.

While some love Pink Kush’s body high and its sedative nature, many feel it is an excellent social strain. It allows for relaxed conversation, the lowering of stress, the easing of anxiety, and mental pressure.

Anyone planning on consuming this strain should do so in the late afternoon or evening. It may give some a sense of drowsy languor as well as a touch of couch lock. It may also trigger hunger, so users should have snacks on hand.

Pink Kush has a distinctive aroma. It is pungent and striking, though not wholly unpleasant. Instead, many enjoy that it has some sweet tones and a mix of other intriguing elements. It contains hints of vanilla, along with dashes of wood and earth.

It also features a few other light scents, including pine and flowers. Its scent has a dash of sour, melded with a tiny bit of heat. Some would describe the smoke as incredibly powerful, but not acrid or overwhelming. Other fans of this strain have described the aroma as fruity and even a little bit minty.

Although Pink Kush has a punchy kind of aroma, it has a flavor that wows even more. Many users love this strain’s complex and robust flavors. It isn’t a strain that comes on too lightly in the taste department, and for strain connoisseurs that enjoy intricate flavors, this is a great choice. It has notes of sweet, candied vanilla on the inhale, followed by a floral bouquet.

It has notes of sweet, candied vanilla on the inhale, followed by a floral bouquet.

The flavor profile doesn’t end there. The sour touch of citrus is combined seamlessly with the crisp, fresh taste of menthol and pine. Some users state that they detect berries and hints of other ripe, summer fruits. Splashes of wood and dank earth shine through.

There is a bit of heat underlying the flavors. While some may not care for the burst of spiciness, it lends a bold character.

Pink Kush has an appearance that most would describe as aesthetically pleasing. It boasts an array of colors, including vibrant pinks, yellows, and greens. It has a thick coating of sticky resin, and those that grow this strain note that it has a frosty appearance.

Its leaves bear the lion’s share of deep, resonant green, while it is the pistils that sport the vivid yellows and dots of pink. There are bits of orange coloring here and there as well as distinguished splashes of purples and tan. The nuggets are compact and dense.

Pink Kush strain seeds are hardy and can withstand a multitude of irritants. These irritants include most molds, mildew, and pests. However, home growers should be careful, as the plant can develop light molding if temperatures and humidity are not optimal.

Pink Kush typically thrives in an environment that is warm and dry. Although this plant tends to grow on the shorter side, some cultivators may support it during the early stages of growth. This will discourage drooping. Other methods, such as topping, are quite successful with this strain. It can grow both indoors and outdoors. The harvest for indoor growth is about 18 ounces per square meter. Outdoor growing may yield 25 ounces or more. 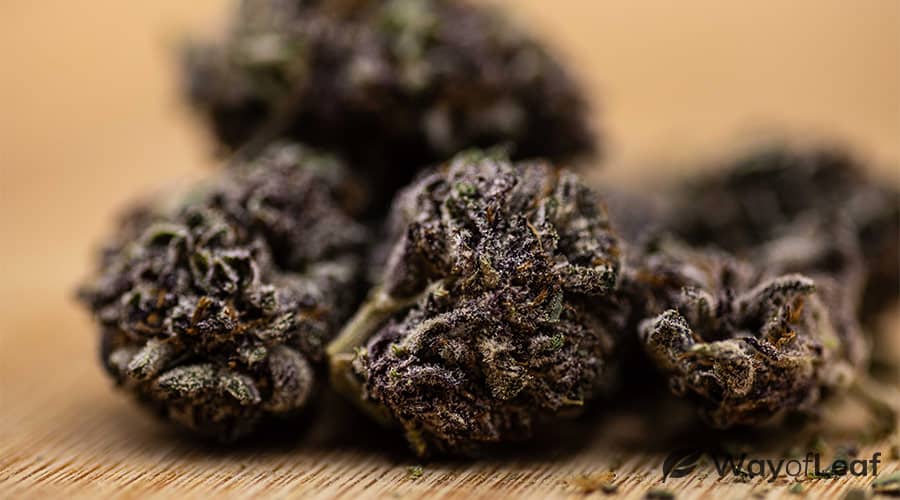 Pink Kush is easy to grow, though it may pose a few problems if it doesn’t get the right nutrients. The soil should be nutrient-rich, and water should have a pH of no more than 6.5. Those looking for a quick turnaround may not like the growth period of this strain.

While it grows hardy and abundant, it also takes upward of 10-11 weeks to finally mature. Some growers have stated that in some cases, it may mature much faster, around nine weeks. However, the best results include a harvest time of 10-11 weeks for more potent effects when consumed.

Growers can also adopt a hydroponics setup. This will aid in growth and discourage the growth of mold. Those looking to grow this strain should also consider low-stress training and pruning. Though this plant is relatively short, it has thick, leafy branches. Air circulation and sunlight are crucial.

The highest content test for CBD averages no more than 1%.

Pink Kush users cite this strain’s ability to soothe, calm, and relax. It has been a hit in cannabis communities for its de-stressing effects. Consumers like that this strain releases tension. Many also state that Pink Kush’s body high offers relief from pain. Migraine sufferers and those with back pain or muscle spasms have cited Pink Kush as assisting with day to day maintenance of their ongoing symptoms. 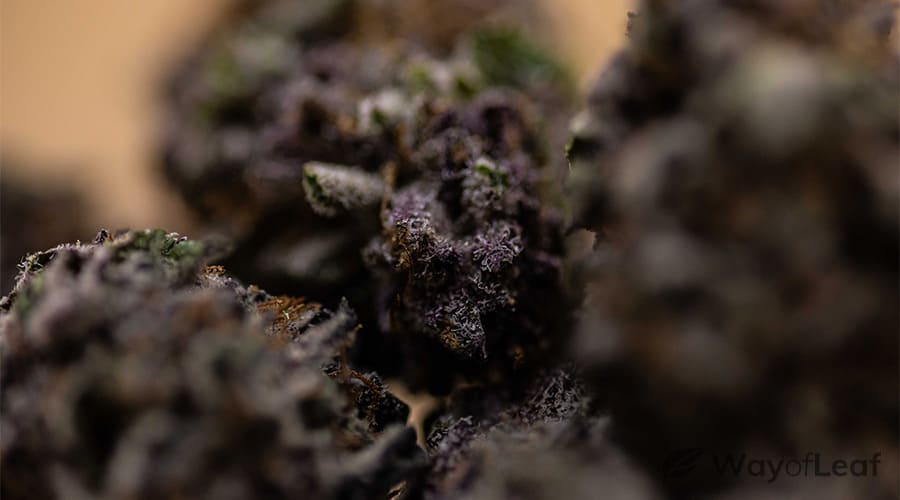 Its stress-relieving properties extend to the symptoms of other disorders as well, including PTSD, anxiety, and panic disorders. Insomniacs appreciate its tendency to induce calm and soothing thoughts as well as drowsiness. Healthy sleeping patterns and more sleep may address many of the issues facing many others with a variety of sleep disorders.

It may also relieve the stress and tension of social anxiety disorder and allow peace of mind and clarity for people living with ADHD/ADD and those seeking focus and creativity.

Possible Side Effects of the Pink Kush Strain

Pink Kush may have some side effects for some users. Some adverse effects include dizziness, dry eyes, and nausea. Other reactions may consist of mild paranoia and dry mouth.

While Pink Kush packs a punch, it is also an excellent way to calm down and unpack the worries of the day. Pink Kush strain also functions as a way for individuals struggling with sleep disorders or insomnia.  It soothes and calms, and users enjoy its body buzz that aids with aches and pains.

Its origins are not altogether straightforward, but some connoisseurs suggest it has some genetic links to OG Kush. If so, its background makes it a sedative smoke with some euphoric properties. For those seeking to grow this strain, it is hardy, but growers should be watchful.

Its origins are not altogether straightforward, but some connoisseurs suggest it has some genetic links to OG Kush.

Some home growers contend that too much humidity may result in light molding, which isn’t suitable for the plant or the final product. Pink Kush thrives best in a warm and dry climate. Cultivators should opt for a variety of growing methods. These methods include topping, LST, and hydroponics.

Those growing this strain should also exercise some patience. It may take up to 10-11 weeks for harvest. While some growers state that growers could harvest the plant sooner. However, for optimal potency, growers should harvest later.

It grows short and stout, but trimming should frequently occur due to the thickness of Pink Kush’s branches. Air and light circulation optimize growth. Indoor growth could yield up to 18 ounces per square meter, and outdoor growth may provide 25 ounces or more. Despite its longer growth time, this sizable harvest makes this strain a viable option for anyone looking to grow.

Pink Kush is indica leaning, with just a dash of sativa heritage. Its THC content is relatively high, at 22%. Users enjoy this strain’s flavors, which include sweet fruit, candy, pine, vanilla, and warm earth.

A sweet treat you won't want to miss