Written by Editorial Team
5 min read
2 comments
Permafrost Strain Overview
One glimpse of this heavily frosted strain is enough to make you feel like you’ve been transported to a fabulous winter wonderland. Apart from its striking appearance, Permafrost has built up a strong reputation among medicinal cannabis consumers due to it purported health benefits. 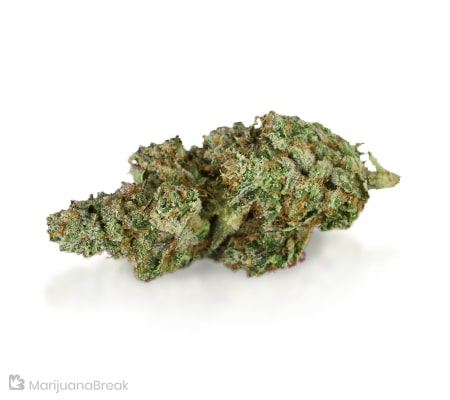 Winter Permafrost might sound chilly, but this marijuana strain will keep you warm and calm.

The Permafrost marijuana strain gets its name from its brilliantly glistening and potent buds, which gleam gorgeously underneath the light. Permafrost has a beautiful crystalline structure (and therefore hefty quantities of THC), which gives it a frosted appearance.

The Permafrost strain was bred by Rogue Buds, who genetically combined two incredible cannabis strains, thereby giving birth to Permafrost. Since then, it has been making waves throughout the medical cannabis community. It has several purported health benefits, some of which may help with the symptoms of mental illnesses and mood disorders.

What Is the Permafrost Strain?

Permafrost’s lineage is slightly contentious. The consensus is that it is a cross between two legendary marijuana strains, namely White Widow, and Trainwreck. However, some believe that Permafrost was created by combining Kali Mist with Trinity Snow.

Despite its chilly and cold seasoned name, this marijuana strain brings warmth and relaxation to the mind and body.

Classified as a hybrid, Permafrost does sway more towards the effects of a typical sativa. This makes sense as Permafrost is a sativa-dominant hybrid, with a 70% sativa and 30% indica genetic ratio. While Permafrost induces relaxation, its consumers say that it helps them to remain focused and attentive.

As its name implies, Permafrost has a large number of trichomes coating its buds’ surfaces. As you can imagine, this means that Permafrost packs quite a potent punch. Lab tests of Permafrost samples have recorded THC levels as high as 23%.

Depending upon the dose consumed, Permafrost has something different to offer to everyone. In smaller amounts, it acts as a mild creative and focus-inducing stimulant. As well as its stimulating cerebral effects, Permafrost has some deeply relaxing physical effects too.

Consumers of this strain say that it both relaxes and loosens up the muscles and joints. While the body begins to melt, the mind remains energized and clear. In higher doses, Permafrost can produce intense psychoactive effects, which induces deep, introverted thought processes.

Regardless of the dose, this marijuana strain won’t make you sleepy or lower your energy levels. It’s energizing and uplifting effects are long-lasting, so you won’t have to worry about falling asleep after consuming this strain.

Some Permafrost consumers say that this cannabis melts away all anxieties, paranoias, and worries. Permafrost is also said to provide a euphoric and mesmerizing experience. Permafrost may be a good choice for artistic types in search of a little inspiration. This strain is said to make you think more creatively and abstractly.

One small aspect of Permafrost’s effects is its ability to cause the munchies. It can sometimes boost appetite so much that it makes its consumers ravenous with hunger.

Overall, Permafrost is a pleasant balance between an indica and a sativa strain. Due to the stimulating nature of its effects, Permafrost is best suited to daytime use.

Permafrost’s aroma is a complete earthy and grounding experience. These buds radiate all-natural scents that bring its consumers back to memories of time spent in the woods.

Laden with a piney and herbal fragrance, coupled with a spicy and pungent aroma, Permafrost really wakes up the senses. Permafrost’s aroma is not only pleasant but stimulating, too.

The flavor is similar to the aroma, with a slightly woodier flair. While Permafrost’s taste might not appeal to everyone, it’s mild, tasty, and multi-dimensional. Despite their small size, these buds pack in a lot of flavor. Permafrost has a sweet and woody aftertaste on the exhale, which lingers long on the tongue.

As Permafrost’s name suggests, this strain is covered in crystals, that are packed full of THC. Aside from this, the flower is a healthy and hearty green color. Some sugar leaves appear paler due to the frosted coating muting down the darker green shade.

In between the frosty sugar leaves are brassy orange pistils. These are a female plant’s reproductive organs. These tiny hairs curl and bend around the buds.

As a Permafrost plant is medium in height, it is suitable for most growing locations. Even smaller indoor grow rooms that have lower ceilings.

A Permafrost plant is naturally resistant to common molds and mildews, as well as some diseases and pests. Permafrost is a dream for cannabis cultivators as its growing difficulty is rated as easy.

Not only is a Permafrost plant low maintenance, but it also produces a generous and potent yield.

A Permafrost plant flourishes best in a warm and temperate climate, which is what it requires when cultivated outdoors. This plant can also be grown indoors in conditions that mimic its ideal environment for growth.

When grown outdoors, this plant will be ready for harvesting around late-October. This cannabis strain has a flowering period of around 10-11 weeks. Successful indoor growers can expect to be rewarded with approximately 16 ounces per meter squared of usable bud. Outdoor growers are looking at a return of around 14 ounces of bud per plant.

The highest recorded THC level in a Permafrost sample is believed to have been 23%. Reports of Permafrost’s THC range vary reasonably wildly. Some say that its THC can range anywhere between 14% on the low end, to 23% at the top end. This would indicate that Permafrost’s average THC content is around 18.5%.

Permafrost is not a high-CBD strain. This strain will have an average CBD content of less than 1%. The highest recorded CBD content in a Permafrost sample is believed to have been 0.93%.

Medical Benefits of the Permafrost Strain

As already mentioned, Permafrost has been making waves throughout the medical cannabis community. Medicinal consumers of this strain believe that it helps alleviate the symptoms of a variety of different conditions.

Permafrost’s indica effects may help to reduce stress and anxiety. This strain may be useful for people with depression. Its sativa effects produce a euphoric, uplifting high, which may offer temporary relief from the symptoms of the mood disorder. Some medicinal Permafrost consumers believe that this strain can help with the symptoms of ADHD/ADD.

As well as the mind, this marijuana strain may also provide relief for the body. It may be useful for people with chronic pain, which could make day to day activities a little more bearable. Additionally, this strain may help alleviate other types of pain associated with muscle tension and arthritis (joint pain).

Other conditions that Permafrost is purported to be useful at alleviating include nausea, lack of appetite, and migraines. For patients suffering from low appetite, Permafrost may help relieve nausea associated with some medications and treatments.

Possible Side Effects of the Permafrost Strain

Despite its potency, Permafrost generally does not produce any significant side effects. This is yet another reason why the cannabis community so adores it. As is the case with most marijuana strains, Permafrost can produce cottonmouth, itchy eyes, and mild dehydration.

Be sure to drink plenty of hydrating fluids before, during, and after consuming Permafrost. Keep a bottle of water nearby at all times to remind yourself to drink. Drinking water not only decreases cottonmouth and dehydration but also helps to prevent headaches and grogginess the next day. Also, eye drops can help to relieve dry, itchy, or irritated eyes.

Permafrost’s potent effects make this strain unsuitable for a novice smoker. A small percentage of Permafrost consumers have experienced headaches and dizziness due to over-consumption.

Final Thoughts on the Permafrost Strain

Permafrost’s sativa-dominant genetics provides its consumers with the best of both worlds. Its sativa genetics produce a euphoric, cerebral high, but one which allows you to remain focused rather than hazy. On the other hand, Permafrost’s indica genetics provide deep relaxation in the latter stages of its effects.

Permafrost has built up a solid reputation among the medicinal marijuana community.

It has several purported health benefits, which may make it useful for alleviating conditions like depression, stress, and anxiety. However, as this strain can have a THC content as high as 23%, it is unsuitable for a novice cannabis consumer. The nature of Permafrost’s effects makes this strain best suited to daytime use.