Written by John Killerlane, B.A., HDip
4 min read
1 comments
Read Later
All information on this website is for general informational purposes only and is not intended or implied to be a substitute for professional medical advice, diagnosis or treatment.
Pennywise Strain Overview
The Pennywise strain gets its name from the terrifying killer clown from the Stephen King novel. However, unlike the book or movie, this strain won’t keep you awake at night. Instead, Pennywise consumers will experience deep relaxation, calming, and soporific effects from this high CBD strain. 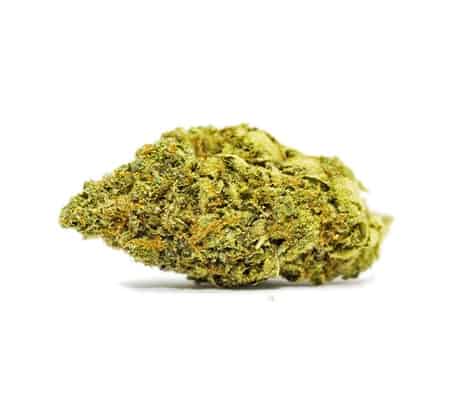 The name ‘Pennywise’ may strike fear into anyone who has read Stephen King’s It. For those of you unfamiliar with the book or the subsequent movie, Pennywise is the name of the terrifying killer clown in the story.

Pennywise is a new breed of marijuana strain with almost equal amounts of CBD and THC. The good news is that, unlike the terror-inducing clown, Pennywise the strain, could help to relieve anxiety and stress.

What Is the Pennywise Strain?

Pennywise weed is an indica-dominant hybrid with a 70:30 indica to sativa ratio. This strain was created by Subcool’s The Dank and is a cross of Harlequin and Jack the Ripper. Due to its high CBD content, Pennywise is much better suited to the medicinal rather than the recreational marijuana consumer. 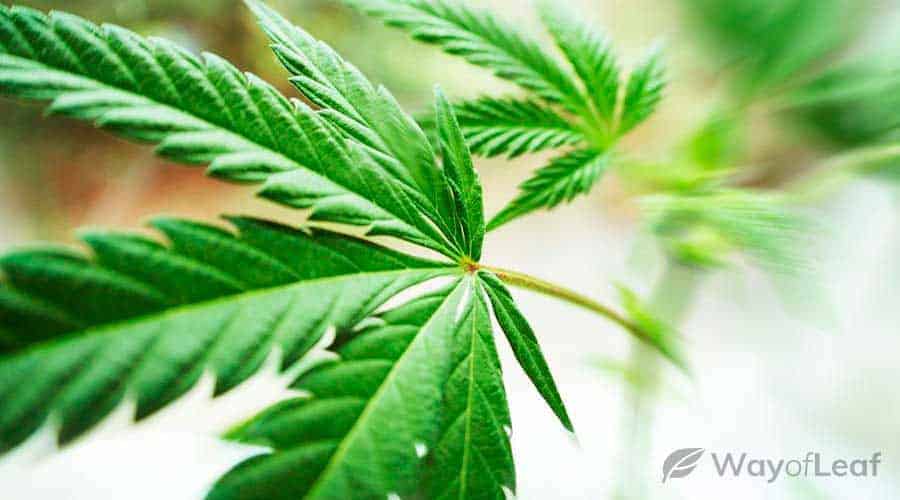 As already mentioned, the Pennywise strain has an evenly balanced THC to CBD ratio. With such a high CBD content, the psychoactive effects of Pennywise are predictably mild. After consuming this strain, you may feel a mild cerebral high and an improvement in mood.

Most users report feeling focused and clear-minded when using this strain.

As this strain’s effects take hold further, its indica properties begin to exert their influence on the body. A feeling of deep relaxation and ultimately sedation sets in. The pace at which Pennywise’s physical effects kick in, tend to vary depending on the user. For some, the body high hits them quickly, but for others, it is a gradual process.

Pennywise consumers say that in the early stages after consuming this strain that they remain lucid and clear-headed. However, when the indica effects begin to take hold, they tend to intensify as time passes. Consumers of this strain say that they commonly become couch-locked after consuming it. These sedative effects can often lead to drowsiness and sleepiness in their latter stages. For this reason, Pennywise is best suited to late afternoon or evening time use only.

Pennywise has quite an interesting fragrance. It has distinctive, coffee-like notes with hints of pepper, and subtler sweet aromas of lemon and bubblegum. When Pennywise’s buds have been cured and dried, they have a dank, earthy odor, similar to damp soil. Breaking open or grinding the buds reveals slightly spicy notes with a hash-like aroma.

Pennywise tastes a lot like it smells, but with one key difference. It has a deliciously citrusy and fruity lemon flavor on the inhale, which is a real treat for the taste buds. Take note, however, while this strain tastes fantastic when combusted, Pennywise produces thick and harsh, cough-inducing smoke. On the exhale, Pennywise’s sour and pepper notes are more prominent.

A Pennywise plant’s flowers are small to medium in size. They cluster together in thick, chunky, and irregularly-shaped formations. The buds commonly have an indica-type structure and are densely compacted together. However, in some Pennywise plants, the buds have a loose, sativa-like appearance.

A mature Pennywise plant has a generous coating of resinous trichomes, which gives it an almost frosted appearance. The pale green leaves provide a little added color, and the orange and brownish pistils grow prominently among the leaves.

One remarkable characteristic of Pennywise is that you could complete four separate grows and end up with four different plants. This is because the strain can express itself in one of four phenotypes. While the structure of the buds and the plant’s colors may differ, they all will be the Pennywise strain. While they may be aesthetically different, they will also have the same Pennywise taste, smell, and potency. 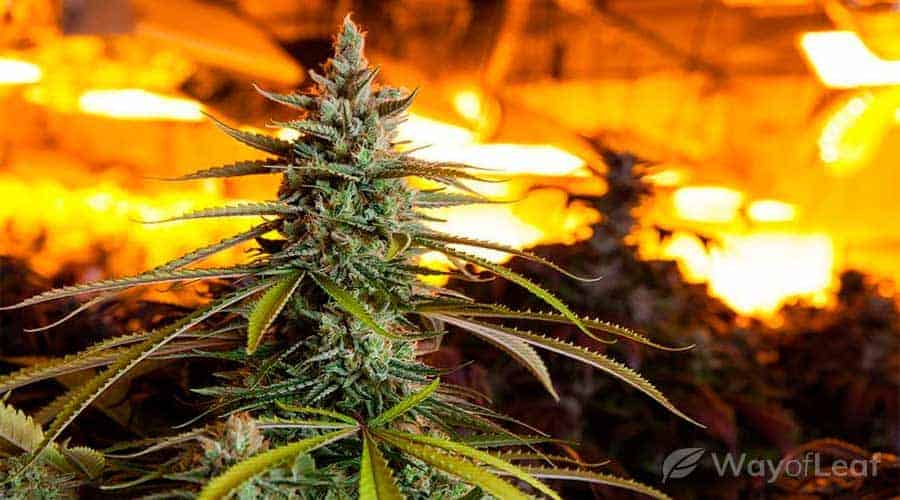 Once you have Pennywise seeds, you can grow indoors or outdoors. If you grow this strain indoors, it should flower in 60-70 days. Indoor growers are looking at a return of 12-16 ounces per square meter planted.

We recommend topping your plants at least once during the grow. Trim away any broad fan leaves that are blocking out light to the lower nodes.

Most Pennywise growers rate its grow difficulty as easy. One big plus is that a Pennywise plant is highly resistant to mold and mildew.

If you grow your Pennywise plants outdoors, they should be ready for harvesting by early to mid-October. Outdoor growers should see a yield of up to 16 ounces per plant.

The highest recorded THC content in a Pennywise sample is believed to have been 15%. However, most Pennywise strains will have a THC content of between 12-15%.

Pennywise is one of the few strains around that provides users with a 1:1 CBD to THC ratio. With up to 15% CBD in some cases, it is a highly-sought-after marijuana strain by medical marijuana consumers.

The CBD to THC ratio of 1:1 is considered ideal for medicinal purposes by those in the industry. Pennywise is often used to help alleviate the symptoms of an array of medical conditions, including PTSD, epilepsy, and arthritis. With such an emphasis on its cannabinoids, it is all too easy to ignore Pennywise’s exceptional terpene profile.

The strain contains more than 0.5% of several well-known terpenes. Here is a list of them along with their potential benefits:

Alpha-Pinene: This terpene is found in pine trees and is responsible for the pine flavor and smell of different strains. Research suggests that alpha-pinene may have anti-inflammatory properties.

Caryophyllene: This terpene tastes of hops, a relation of marijuana. It may help lower stress and anxiety levels, and for alleviating the symptoms of depression. One tip, you will end up with more caryophyllene if you grow in soil rather than using a hydroponics system.

Linalool: You will get a floral scent from this terpene along with a hint of spice. It is linked with an increase in neural function because it modulates gross motor movement. It is also said to have anti-inflammatory properties.

Beta-Myrcene: This is the most abundant terpene in marijuana, although it is only the second most abundant in Pennywise. It has an earthy scent and is known to act as a sedative and relaxes muscles.

Limonene: This terpene is responsible for the lemon scent and taste of Pennywise. It is also the most abundant terpene in this strain. It is said to help with weight loss, bronchial infections, and more.

Possible Side Effects of Pennywise

As is often the case with marijuana, Pennywise use could result in dry eyes and cottonmouth. There is also a chance that you will feel dizzy; this is especially the case if you are a newbie. As the effects are mild on the whole, it is all too easy to make the mistake of overindulging. However, this may lead to dizziness and headaches. There is also a chance that you’ll have a case of the munchies.

In the end, the strain with the killer name is a pretty mild one. With a modest THC content of no more than 15% and a CBD to THC ratio of 1:1, it is unlikely that Pennywise will overwhelm experienced users. Pennywise is considered to be one of the best medicinal marijuana strains on the market.

Pennywise is considered to be one of the best medicinal marijuana strains on the market.

It has numerous purported health benefits and may help alleviate the symptoms of several conditions. While it won’t get you too high, it will probably help you go to sleep. If you plan on consuming this strain, save it for late afternoon or evening time use.

Perfect for every pocket…