Written by Editorial Team
5 min read
0 comments
Read Later
All information on this website is for general informational purposes only and is not intended or implied to be a substitute for professional medical advice, diagnosis or treatment.
Orange Skunk Strain Overview
Orange Skunk is an 80/20 sativa cannabis strain that is also known as The Original Californian Orange Skunk. Thanks to its moderate THC levels of between 12 to 16%, this is a strain that can be enjoyed by most smokers. 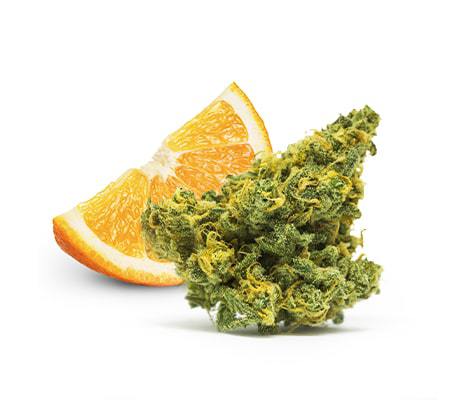 Some of the best hybrid strains on the market can be found with skunk genetics. Generally, when you think of skunks, you are probably familiar with those that are black and white. But there are others that have grey, brown, or cream colors, and in the cannabis community, there’s one that comes in orange.

Skunk isn’t exactly an appetizing name, but it’s a well-known term around the world and considered to be a pillar of cannabis breeding. Skunk began with Californian cultivators combining different landraces, eventually leading to a wide range of hybrids.

The Orange Skunk name is because of the delightful scent of orange. The orange influence is a trait inherited from one of the parent strains, California Orange.

When referring to this strain, many users like to call it old-school because it first emerged back in the 80s. Over the decades, it’s also been given several other names – Cali Orange Bud, Cali-O, and Californian Orange. It’s known for its clear-headed high.

The other parent strain, Skunk No. 1, also has an undeniable influence on Orange Skunk. This isn’t only evident in its aroma, but also in the way it makes users feel energetic.

Find out more about this intriguing strain in our complete Orange Skunk review below.

What Is Orange Skunk Strain?

The Orange Skunk cannabis strain is an 80/20 sativa-dominant strain that is also known as the Original Californian Orange Skunk. This strain originates from two wonderfully delicious buds: California Orange and Skunk No. 1.

Orange Skunk is a dank bud that has an average THC level of between 12 to 16% and features an array of dominantly sativa effects. Thanks to its moderate THC levels, this strain can be enjoyed by most smokers. It won’t blow you out of this world, but it will leave you feeling warm and fuzzy after just a few hits. 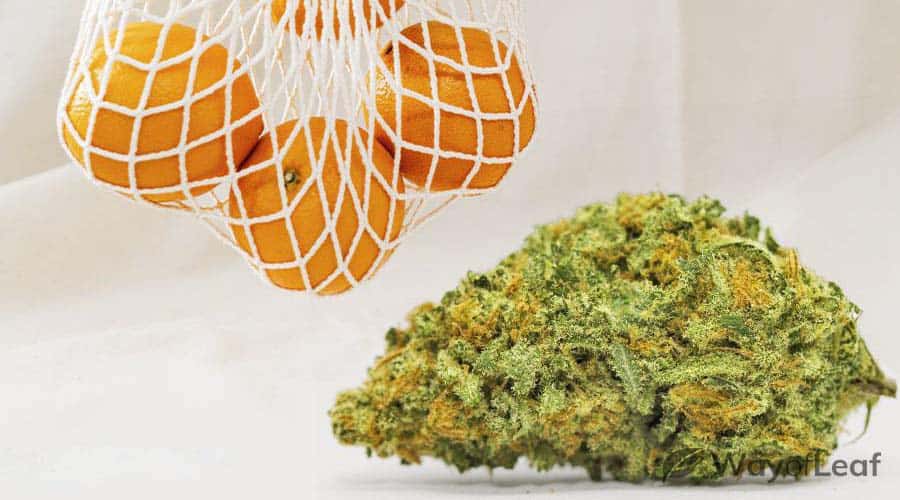 Because this is a sativa-dominant strain, you can expect the cerebral high that most sativa lovers adore. After just the first hit, waves of creative energy will wash over you, and a boost in energy and an overwhelming sense of euphoria will follow soon after.

At its onset, you will feel an uplifting mental buzz that offers an overall sense of bliss. The head clears almost instantly, and most people will experience heightened sensations. With a laser-like focus, you will be very much aware of your surroundings. Most users are still able to function and do their tasks – and often even be motivated to do so.

As the indica side takes effect, a warming high will hit your limbs and make its way all the way to your neck and head, leaving you completely relaxed as the tingles move throughout the body. As the high begins to fade, you can enjoy the steady laziness that takes over your motivation. You will want to have snacks handy because this strain is known to peak hunger levels.

When cannabis fanatics start discussing the best smelling strains, California Orange is bound to come up. And Orange Skunk smells very similar, but also has a subtle skunky odor to compliment the orange scent that has been delighting users for the past three to four decades.

The Orange Skunk flavor doesn’t disappoint. It tastes very much like it smells. You can expect citrusy orange flavors with a tad of wood. It’s pleasant and delightful.

Growing Orange Skunk is a breeze and has even novice growers rejoicing at the simplicity.

As a sativa-dominant strain, Orange Skunk has a fairly quick flowering time. It grows well both indoors and outdoors and is known to produce an impressive yield of resinous buds. It’s best to place the plant in a cool place before it starts to flower; it will then produce purple and maroon hues.

When grown indoors, the plant has a flowering time of about 8 to 9 weeks. It requires more tending than usual to keep it bushy. It is also best to prune and trim some leaves to give better ventilation and allow more light to hit hard-to-reach parts of the plant. When ready, it produces up to 24 ounces of buds.

Outdoors, Orange Skunk thrives best in warm environments. It can handle colder temperatures, but that’s best done only later on in the vegetative stage. The flowering time takes place during the last days of September, and each plant produces an incredible yield of up to 40 ounces of buds.

Generally, Orange Skunk is considered to be an average strain in terms of potency with THC levels of between 12 to 16%. However, some tests have found the THC content to be as high as 22% – which is a very high level that will thrill most recreational users.

Ultimately, Orange Skunk takes users on a ride without falling off the edge.

Orange Skunk contains just about no CBD. In fact, no test has found even as much as 1% CBD in any strain. Essentially, this bud only has trace amounts of CBD.

Orange Skunk is typically used for its sedative-like qualities and soothing tingles, which make it great for headaches, pains, and muscle spasms. It helps to smooth over the tension and aches that lead to chronic conditions, and users love the relief it provides.

For those who suffer from a lack of appetite, the hunger-stimulating effects of this strain can make it the perfect companion for meal preparation.

Because Orange Skunk induces an uplifting high, it helps to shift the mind away from both physical and psychological discomforts.

Although it doesn’t possess much CBD, users still find it helpful in dealing with pain. This is probably due to the euphoric cerebral buzz that makes users ignore mild discomforts. While it only has a very small indica side, it exerts enough of these properties to soothe aching muscles and reduce tensions.

Also, thanks to the feelings of happiness that set in, people who are dealing with emotional issues may find it easier to manage their feelings. This is important for those who are experiencing extreme stress or depression.

Although it’s a delightful strain that even smells wonderful, Orange Skunk doesn’t come without its adverse side effects that users would rather not experience. That said, adverse reactions are always a possibility when using any cannabis strain.

Most commonly, users may experience dry eyes and a dry mouth after smoking weed. But compared to other strains, Orange Skunk is more likely to cause headaches, especially if it’s overused. To a much lesser extent, mild dizziness or a little paranoia are also a possibility.

Orange Skunk offers a blend of stank and flavor, which has skunk lovers feeling ecstatic. Enjoy this strain with breakfast or early afternoon to enjoy an invigorating and active high that will carry you through much of the day.

Because of its average (not so potent) THC level, Orange Skunk may be a good strain for beginners. It’s also perfect for twisting up into a joint and enjoying with friends since it takes a few hits to get truly lifted off this one. It’s a great mood-enhancer, making users feel uplifted, happy, and cheerful. When used in moderation, it is an excellent party strain.

Orange Skunk may work well for anxiety, inflammation, minor pains, depression, or stress. Furthermore, because it’s an upper, it can enhance focus and motivation.