Editorial Team
8 min read
0 comments
Ninja Fruit Strain Overview
A strain with incredibly mild, soothing effects that don't leave you a disabled zombie for the rest of the day, this is a strain worth finding and holding onto. 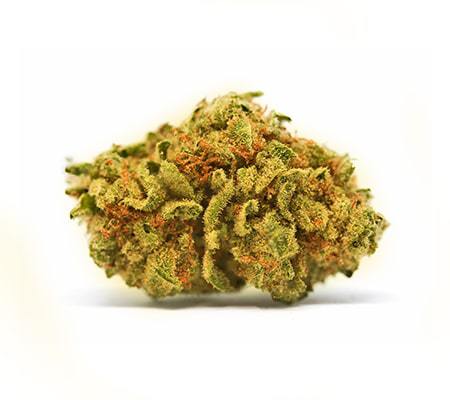 Ninja Fruit, also known as Fruit Ninja, is one of the most popular phone games out there, with most people having at least tried it at least once.

However, as you start to get older, it can feel pretty challenging to try to relive these old games that fill us with nostalgia. Maybe one of the best ways to try and relieve this feeling is to enjoy a marijuana strain that is not only named similarly but also gives you that same kind of feeling.

Let’s take a look at the Ninja Fruit strain and figure out whether or not it really can cultivate that same feeling of satisfaction and enjoyment.

What Is the Ninja Fruit Strain?

Both of these strains have pretty clear parentage, as well as a significant flavor profile that means that Ninja Fruit is going to have just as potent and pungent a flavor.

Alongside the plentiful quantity of cannabinoids within this strain, Ninja Fruit is well known for carrying with it an absolutely unheard of amount of different terpenes. This not only helps encourage a unique and mellow flavor, but also aids in its myriad effects.

When you first imbibe this pungent and memorable strain, you will immediately get the sensation that this is the perfect daytime, chill-out experience. People commonly use this strain at the very start of the day. It gives you an instant rush of euphoria, allowing you to feel like everything around you is easily accomplishable, and there is no difficulty in anything.

You will feel like you are full of energy, while still remaining razor-focused and just a bit more eager to talk to people. As the high begins to develop, usually around lunchtime, if you took it at the beginning of the day, the remnants of indica lethargy will kick in, as well as a potent kick of the munchies.

This kind of effect can feel like it happens suddenly and without warning, so make sure you time your dosage correctly. If you are planning on enjoying this strain at the start of your workday, you do not want to find yourself suddenly overcome with intense feelings of tiredness right when you need energy.

So, what kinds of things can you expect from the flavor and aroma of this strain? Does it offer up everything it promises with such a fruity and flavorful name?

The Ninja Fruit marijuana strain has an aroma that is pretty typical of what you would expect when you consider the name. There is plenty of that rich, tangy fruitiness that goes along with Fruit Ninja.

The inherent sweetness is just a little bit spicy as well, carrying with it the smells and aromas of the jungle, replete with earthiness and a little bit of that almost acidic dankness.

It isn’t just one note of sweetness; however, there is plenty of bitterness and sourness, especially towards the end of the aroma. This starts to show itself as you crack the bud open and bring it closer to you.

What about its actual taste? Does it offer up as significant a flavor as it does a smell?

As you first inhale a puff of Ninja Fruit, the first thing you will taste is a rush of pungent fruitiness. This kind of flavor profile does seem pretty obvious, but there are far more intricate and in-depth layers to it than you would first expect.

As the smoke fills your mouth and rolls over your tongue, you will notice a prolific note of spicy herbaceousness, almost like chicory or cilantro, plus all of the accompanying freshness. It is ultimately pretty similar to its aroma, though it does also come with a decent level of that subtle difference that makes it worthwhile to taste it and not just smell it from afar.

The sourness is especially more noticeable as you exhale, giving the whole experience a sensation of perfect balance, like a perfectly flavored gourmet meal.

What about how it looks? Does it also have an attractive appearance to go alongside its flavor and aroma?

The buds of the Ninja Fruit strain are quite ordinary in initial impression, offering up a suitably round and decently attractive appearance. They are quite globular, as well as being intensely green, though this is interrupted by plenty of bright orange pistils.

There is plenty of those beautiful trichomes, which give it a subtly white appearance, rather like a covering of gentle clouds on a warm spring afternoon.

The strain ultimately looks pretty regular, albeit with plenty of those great warning signs that this is going to be a delightful piece of bud.

However, if you want to view this strain in all its glory, as well as more carefully tailor how the final product looks, you need to try and grow some for yourself. So, what do you need to know to grow your own Ninja Fruit?

If you are looking for some Ninja Fruit, you should not have any problem finding some Ninja Fruit strain seeds. The best thing about growing your own Ninja Fruit is the fact that it is not incredibly hardy, but it is basically foolproof.

You can quickly grow it either indoors or outdoors, requiring only minimal extra equipment if you want to keep it inside. Ninja Fruit has a pretty standard flowering time of roughly eight to nine weeks, producing a very sizeable yield.

The thing you need to remember is that, even if it is an easy strain to grow yourself, it still does require some attention to detail and care is given to its growing cycle. You need to keep it fed with sufficient nutrients, as well as ensuring the ambient temperature is held to the proper level.

If you neglect any of these steps, you can find yourself with only a middling quantity of sub-par bud, all of which will lack any kind of distinctive flavor, aroma, or those beautiful trichomes.

For nutrient additions, stick to ones high in nitrogen, as well as ones that don’t put the plant at risk of being shocked from overwatering. A thick, permeable soil is best, possibly interlaid with some loose stones or rocks to help encourage proper drainage.

Assuming you give it the attention it deserves and keeps it watered, you likely won’t find too much difficulty with your Ninja Fruit plant.

Once it is all harvested, dried, and prepared, what kind of final cannabinoid content can you expect?

The THC content of the Ninja Fruit cannabis strain is around 15%, which is a surprisingly mild concentration compared to its effects.

Most of the time, when a strain has a series of effects like what Ninja Fruit offers, it will tend to be pretty overpowering in THC concentration. While some people do prefer this level of cannabinoid overload, most of the time, it is just too much to deal with.

By being able to enjoy a strain with only an average level of THC, Ninja Fruit offers a calm and pleasant high that doesn’t leave you paranoid and freaking out over every little thing.

Considering the lower level of CBD found within Ninja Fruit, you would think that it would contain a decent amount of CBD to help make up the balance.

However, despite this seemingly decent assumption, Ninja Fruit has basically no CBD content whatsoever. This is a result of its strong and highly in-depth growing history, producing a strain that has been tailor-made with the exact levels of cannabinoids desired in the final product.

This is not to say that there are no beneficial medical effects of the Ninja Fruit strain, however.

Those looking for the therapeutic effects of their favorite marijuana strains are typically hunting for a few specific reasons, usually to treat chronic physical or mental disorders.

The great thing about this strain is the fact that it does not leave you completely removed from existence and unable to function. The same qualities of this strain that make it perfect for taking at the start of the day also make it great for dealing with pain.

It can help soothe problems associated with long-term pain or injuries, while still keeping you mentally aware enough to participate in the world around you. You can also use this strain to help tackle mental issues, as this strain’s calming and pleasant effects are perfect for tackling feelings of stress, depression, and anxiety.

For those that are struggling with maintaining a consistent appetite, whether through an eating disorder or as a result of medical treatment such as chemotherapy, Ninja Fruit is another great option. With incredibly potent hunger-inducing effects, this strain is a great way to make sure you eat what you need to, while also helping reduce feelings of nausea.

What about side effects? Are there any unpleasant consequences of taking the Ninja Fruit strain?

Possible Side Effects of the Ninja Fruit Strain

While many marijuana strains possess a decently sized list of unpleasant, almost irritating side effects, Ninja Fruit is one of those strains that seemingly manages to avoid it altogether.

There are still always present side effects of dry mouth and dry eyes with this strain, but you can easily avoid them by staying hydrated and keeping a moist towel on hand.

There isn’t really any significant risk of paranoia or anxiety as a result of this strain, primarily because of Ninja Fruit’s lower than average THC concentration. The only real side effect that people tend to report with this strain is an occasional bout of eye pressure.

This means a growing, almost mounting irritation behind the eyes that leaves you feeling like there is something straining just behind the eye. This effect is not long-lasting, really only taking place about an hour into the high. This also almost entirely only happens if you smoke too much of it at once. So, as long as you control your intake of this strain, you should be fine.

The Ninja Fruit strain is one of those rare, highly sought after strains that are able to be taken during the day.

With most marijuana strains being relegated to only being usable in the evening, for fear of falling asleep or having too strong psychedelic effects, it is a real marvel to be able to enjoy the Ninja Fruit strain whenever you like.

Commonly taken at the beginning of the workday, this is a strain to enjoy whenever you feel like enjoying some long term relaxation and plenty of lovely feelings of contentment to last you throughout the day.

Just make sure you anticipate the slight state of lethargy towards the end of the high – you don’t want to be falling asleep during meetings!

All you need to know about this delicious bud