Written by Editorial Team
4 min read
0 comments
Read Later
All information on this website is for general informational purposes only and is not intended or implied to be a substitute for professional medical advice, diagnosis or treatment.
Neptune OG Strain Overview
Neptune OG is a balanced hybrid strain that offers a euphoric high followed by heavily sedating effects. Many use this strain for evening relaxation after a busy day or to de-stress and unwind. 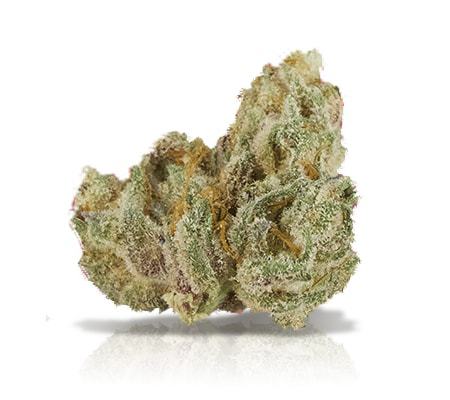 Both novice smokers and experts love hybrid strains as they offer both sativa and indica effects together. Hybrids are ideal for those times when you want to experience an uplifting high followed by deep relaxation.

Some hybrids offer a sativa-dominant experience with just a hint of indica thrown in. Others provide an almost perfect balance between the two. And that’s what you’d expect from Neptune OG on paper. However, its effects do not quite match its reported perfect 50% indica / 50% sativa split.

You would believe it to be an indica-dominant strain with a relatively low sativa content after consuming this strain. We’ll discuss Neptune OG’s effects in more detail below.

What Is the Neptune OG Strain?

There is very little information about Neptune OG’s origins, both in terms of its breeder and its lineage. Neptune OG’s name implies that it is a member of the OG family, although its exact link is unknown. The lack of information surrounding Neptune OG makes it challenging for those looking to grow their own Neptune OG plants.

The Neptune OG strain is technically a perfectly balanced hybrid strain with a 50% indica / 50% sativa breakdown. In reality, however, Neptune OG closely resembles the effects that you would expect from an indica-dominant hybrid.

Initially, users will experience a euphoric cerebral high, coupled with a greater sense of focus. As time passes, the potency of the heavy indica effects takes over.

Consumers report heavy sedation and an intense couch-lock sensation. Neptune OG causes your limbs to feel heavy and your body to melt into deep relaxation.

Some people also describe experiencing sensory distortion after consuming Neptune OG, which could be upsetting to novices. It is a good idea for those unused to intense indica effects to start with a small amount. This may help to avoid any potential anxiety-inducing effects.

Users often recommend Neptune OG for a creative boost due to the strain’s psychedelic effects. Even for those who are not planning on pursuing creative projects, Neptune OG’s intoxicating effects can offer a new perspective.

Some say that Neptune OG’s aroma smells like berries and hash mixed with a fresh earthy odor. It’s advisable to smoke Neptune OG outside or in a well-ventilated room due to its pungent fragrance.

With the first puff of Neptune OG’s thick smoke, your taste buds are flooded with a wave of sour grapes.

After exhaling, there’s a pleasant sandalwood incense aftertaste that leaves you wanting more. Neptune OG is sure not to disappoint those who enjoy OG strains for their distinct flavor profile. 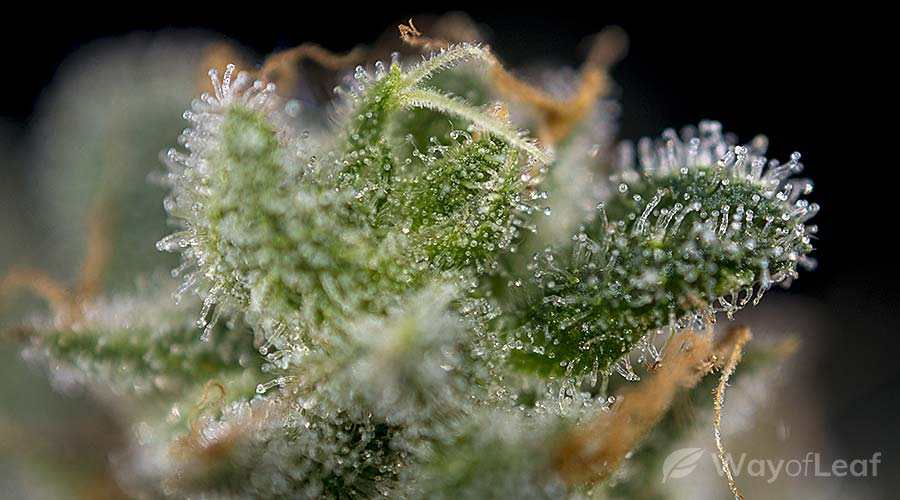 Neptune OG is covered in a very thin layer of rusty orange pistils. Neptune OG lives up to its OG roots with a thick and almost fluffy covering of trichomes over each bud. Typically, Neptune OG plants produce small flowers.

The good news is that Neptune OG is an excellent strain for those who are new to growing and have little gardening experience. Neptune OG plants are extremely low maintenance, resistant to most common garden molds and pests; they require minimal checks.

It is best to grow Neptune OG plants indoors as they need a high humidity environment of at least 80%. Luckily Neptune OG plants rarely grow above three feet, allowing you to keep them even in confined spaces. Neptune OG plants take between 10 and 12 weeks before they are ready to harvest and produce a sizable and rewarding yield.

For those growing Neptune OG plants outside, you can expect a harvest at the beginning of fall as the temperatures start to drop.

Neptune OG cannabis contains 23% THC at its highest and approximately 21% on average. The average THC level for a hybrid strain is 13%, placing Neptune OG at the higher end of the scale.

The highest recorded CBD content in a Neptune OG sample is believed to have been 1.11%.

These marijuana strains will b…

Neptune OG’s heavily sedative indica effects have made it a popular choice for people with insomnia. Many Neptune OG users say that it has strong soporific effects in its latter stages and helps them sleep better.

The short-term uplifting effects may help those with mood disorders such as depression and anxiety. Many also use this strain to de-stress and for relaxation purposes.

The Neptune OG strain is reportedly effective at alleviating a whole host of painful conditions. Some of these include muscular and joint pain and headaches, to name just a few.

Possible Side Effects of the Neptune OG Strain

The most common side effects when smoking Neptune OG are dry mouth and dry eyes. In large doses, Neptune OG can cause sudden dizzy spells due to its high THC content. Some have also experienced heightened paranoia and anxiety after consuming this potent strain.

Neptune OG reportedly is an evenly-balanced hybrid strain. However, its euphoric and uplifting early effects quickly give way to heavy sedation that commonly causes couchlock. Therefore, Neptune OG acts more like a potent indica than it does a hybrid strain. Novices should leave this potent strain to more experienced cannabis consumers.