Written by Editorial Team
3 min read
0 comments
Read Later
All information on this website is for general informational purposes only and is not intended or implied to be a substitute for professional medical advice, diagnosis or treatment.
Mob Boss Strain Overview
Mob Boss is a strain that you definitely don’t want to mess around with. Otherwise you may just find yourself in a bit of a situation. No pun intended. This strain can produce quite the cerebral high and has been known to overwhelm its users as a result. It can also give you quite the burst of energy as well, so it’s best used in moderation! 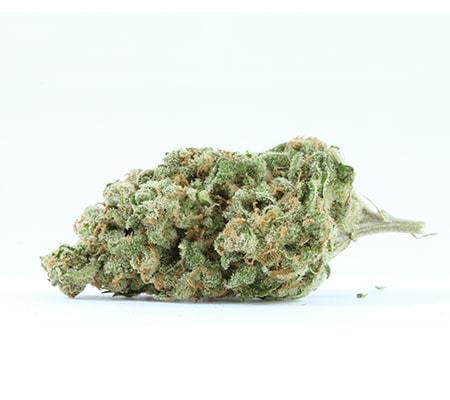 Although we are supposed to loathe bloodthirsty criminals, there is an aura amongst legendary mob bosses such as Frank Costello, Carlo Gambino, Big Jim Colosimo, Al Capone, and John Gotti. They did awful things but commanded respect from their subordinates, fear from their enemies, and there is still a fascination with them to this day.

Interest in the Mob Boss strain is a little easier to understand. As a marijuana strain, it is as tough as the name suggests, and not one for newcomers to take lightly.

What is the Mob Boss Strain?

Mob Boss weed is a sativa-dominant strain that is a cross of Tang Tang and Chewdawg. Grindhouse Medical Seeds is the California breeder accredited with creating this strain in 2009. This is certainly an interesting combination, since Chewdawg is a potent strain with a chemical fuel aroma, whereas Tang Tang is a sativa that acts fast.

When you hold this strain in your hands, you will appreciate the sweet floral scent that comes with added tinges of herbs and citrus. Once you light it up, you still get a pleasant lemon aroma.

Mob Boss is an exceptionally flavorful strain, and you can experience spicy, citrus, sweet and woody tastes in a single toke. However, we are also keen to point out that you may also get a powerful skunky smell, but should still enjoy sweet and sour notes as you exhale.

Far from being an intimidating looking strain, Mob Boss is an aesthetic marvel. The fluffy buds are a healthy green color and the glistening trichomes that coat the buds at harvest time are a joy to behold.

After getting your hands on Mob Boss seeds, you will be pleased to know that you can grow it indoors or outdoors. However, it takes a little skill to properly cultivate this strain so novices may require some guidance to get them through the process. When it is ready to harvest, you will note the dense buds and see red hairs sticking out from the leaves.

If you grow Mob Boss outside, you need to live in a Mediterranean climate, and the plants should not be exposed to daytime temperatures below 70 degrees Fahrenheit. It grows up to four feet tall and begins flowering at the beginning of October. The potential yield is an impressive 28 ounces per plant.

Not everyone has access to private land outside, and this may be a blessing, as Mob Boss is easier to cultivate indoors. Its aroma is strong, so we recommend placing it in a sealed grow room or tent with an odor-control filter. Mob Boss’ flowering time is 9-11 weeks, and it can yield up to 24 ounces per square meter planted.

Consider using the Sea of Green (SOG) method to reduce flowering time. It may also be a good idea to top the plants early to keep the height of the plants in check. Once you have harvested your Mob Boss plants, hang the buds upside down for seven days until they dry in a room with a relative humidity level of 50% and a temperature of 70 degrees. Once the buds are sufficiently dry, place them inside wide-mouth glass mason jars.

By the way, if you watch your plants carefully, you will be able to see which parent is taking control. For example, if Chewdawg dominates, you will see rounded-top or flat colas and big bracts. If Tang Tang genetics come to the fore, you will see long pointed colas which are very thick.

Mob Boss’ THC ranges between 18% and 24%. Believe it or not, the effects of this strain are even more powerful than the high THC content suggests.

What Can I Expect When I Use Mob Boss Weed?

The problem with Mob Boss is that there are two phenotypes which provide you with very different experiences. The first one is the most available option and offers a clear-headed high which gives you an uplifting buzz that improves your mood. Not only will you experience a feeling of euphoria, but you should also feel a significant boost in energy.

If you end up using the second phenotype, watch out! It will hit you right in the face as your head fills with a buzzing pressure; you will find it hard to keep your eyes open during this phase such is the potency of the cerebral high. We don’t recommend the second phenotype to new users because the experience may prove overwhelming. Once the euphoric high subsides, your body begins to relax, and you may crave food at this stage.

Although you ultimately experience full body relaxation, Mob Boss is not a strain to be used before you go to bed, nor should you use it if you still need to complete difficult tasks. It is probably best used in the evening several hours before you intend to sleep.

This is a strain known for its medicinal value. It is often used by individuals with depression or similar mental health issues because of its ability to enhance a user’s mood. It is also said to be an excellent stress reliever because it helps you to remain upbeat and full of positive vibes for several hours.

Mob Boss is used as an analgesic because of its potency. Patients use this strain to soothe their muscles and reduce the pain caused by a variety of conditions. As it can give users the munchies, you could use Mob Boss to stimulate your appetite. One instance where this is useful is in cancer patients undergoing chemotherapy. Finally, as it can focus one’s attention, Mob Boss is potentially effective when treating conditions such as ADD/ADHD.

Perhaps the biggest issue with Mob Boss is overuse due to its potency. If you use too much, you may feel paranoid or anxious. Novices who use this strain will probably experience a high so intense that they classify it as a bad experience. Even when used in moderation, there is a chance that this strain will result in side effects such as headaches, dizziness, and dry mouth.

This is one Mob Boss that you don’t mind having in your house. As the name suggests, it is not a soft and cuddly strain suitable for novices. It is extremely potent cannabis so use it wisely and sparingly. It is possible to use it in the morning, but we only recommend this if you are an experienced user who has already been exposed to Mob Boss in the past.

It is also not the ideal strain for novice growers. If you grow it outside, it can reach a height of seven feet. For indoor growers, it is important to prune as necessary and top the plant to keep the height under control. Mob Boss requires lots of maintenance and is best grown by someone with plenty of experience.