Written by John Killerlane, B.A., HDip
4 min read
15 comments
Read Later
All information on this website is for general informational purposes only and is not intended or implied to be a substitute for professional medical advice, diagnosis or treatment.
Mimosa Strain Overview
With its parents being the flavorful Clementine and Purple Punch strains, it's of little surprise that this combination produced the delicious cocktail-like offspring, Mimosa. The Mimosa strain offers a happy and energetic high, but it does cause the munchies, so have plenty of food on hand. 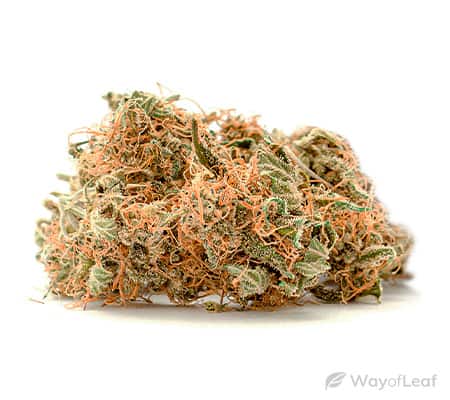 When you hear the name Mimosa, you may picture yourself lounging beside the pool with the famous champagne and orange juice cocktail in your hand.

But if you have been paying attention to up-and-coming cannabis strains like Mimosa from Symbiotic Genetics, you are probably picturing a joint in your hand rather than a cocktail.

What Is the Mimosa Strain?

Mimosa (sometimes referred to as Purple Mimosa) is a sativa-dominant hybrid (70% sativa: 30% indica) strain that is the offspring of the sativa Clementine and the indica Purple Punch.

Mimosa’s popularity has been steadily growing since its arrival on the cannabis scene in 2017. Smokers of Mimosa weed love this strain’s cerebral high and uplifting effects.

Due to Mimosa’s energizing effects, cannaseurs refer to this one as a  “wake and bake” strain. Therefore, it is best suited to daytime use, and you are better off avoiding this strain late at night if you intend on going to sleep anytime soon.

Users say that following the initial euphoric buzz, which tapers off gradually, Mimosa leaves you feeling happy, uplifted, and energized.

Mimosa has a modest CBD level of 0.05% but a much more potent THC level, which can reach up to a staggering 30%.

Mimosa’s delicious citrusy aroma and flavor are further reasons why this strain has become so popular among cannabis smokers.

The good news is that Mimosa has inherited all of those wonderfully delicious citrusy orange scents from its parent strain Clementine. These are infused with some sour notes, which give it a robust sweet and sour smell.

Mimosa’s other detectable aromas include some earthy notes and fresh floral fragrances.

Mimosa’s aroma gives the prospective user a good indication of how great this strain tastes. The sweet and sour flavors dominate, and just like the Mimosa cocktail, this strain is a treat for the tastebuds.

A mature Mimosa plant has a dense coating of large cone-shaped buds with a heavy covering of milky-white trichomes. Hints of purple from its parent strain Purple Punch contrast beautifully with the heavily frosted appearance of the Mimosa plant. 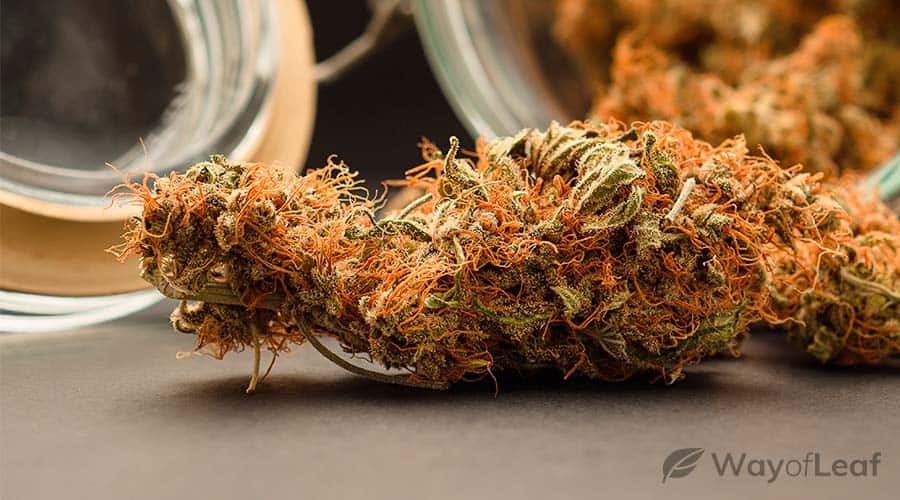 The bright orange pistils that grow prominently around the leaves and wintergreen calyxes make a Mimosa plant a sight to behold.

There are ways to help Mimosa’s terpenes reach their full potential and thus maximize the plant’s flavors. One is the soil quality you choose to grow the Mimosa plant in.

We highly recommend using a complex healthy soil medium rich in essential nutrients, as it will help to nourish the plant during its different growth stages. You can purchase a super soil mix in a bag for about twenty to thirty bucks or try your hand at creating your own. 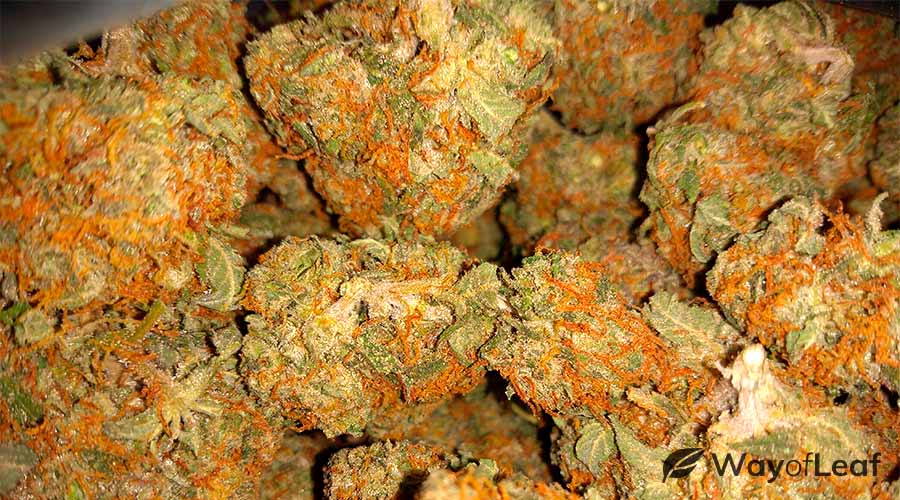 Alternatively, you can provide the Mimosa plant with some of the essential nutrients it needs at different stages of its growth. You can start by applying above-average levels of nitrogen in the vegetative stage. Follow this by adding high phosphorus and potassium levels in the flowering stage to help maximize terpene content.

After harvesting, you can further enhance Mimosa’s citrusy orange flavor by curing the buds. Begin by drying the buds, either by hanging them upside down or placing them on a drying rack for seven to ten days. The buds need to be completely dry so that they don’t develop mold during the next stage of the curing process.

When the buds are completely dry, place them in an airtight container like a wide-mouthed Mason jar. Seal the lid tightly before storing them in a cool, dry place, e.g., a closet.

During the first week of curing, you will need to open the lids at least three times a day for five to ten minutes. Doing this will allow any moisture to escape and let the buds breathe. After the first week, you will only have to do this a few times during the following weeks to prevent any mold from forming.

After two or three weeks, the Mimosa buds will be sufficiently cured for you to experience all of the sweet citrus aromas and flavors in their full glory.

You can continue to cure these buds for 4-6 weeks if you don’t mind waiting around a few weeks longer for even better results.

Don't skimp on the last growin…

Mimosa has an indoor flowering time of nine weeks and is typically ready for outdoor harvesting by mid-to-late October.

The highest THC content recorded in a Mimosa sample is believed to have been a whopping 30%. Mimosa’s THC level can range anywhere between 17-30% so novices should exercise caution with this highly potent strain.

Medical Benefits of the Mimosa Strain

Mimosa has many medical benefits thanks to its sativa-dominant genetics. Mimosa contains a significant amount of the following terpenes:

Both limonene and linalool are believed to elevate mood. Meanwhile, beta-caryophyllene is believed to be an effective stress reliever. Therefore, it is hardly surprising that Mimosa’s effects include reducing stress levels and addressing mood disorders such as depression.

Mimosa users say that this strain is an effective pain reliever that can alleviate headaches and joint and muscular pain.

Users with chronic fatigue say that Mimosa’s energizing effects provide a much-needed energy boost to help them get through a busy day. Others say that while Mimosa is not great at reducing nausea, it does induce the munchies, so it may be an effective appetite enhancer for some.

Possible Side Effects of the Mimosa Strain

The main side effects that people associate with smoking Mimosa weed are dry mouth and dry eyes. If you have a low tolerance to THC or overindulge, you may experience heightened anxiety, dizziness, and paranoia. 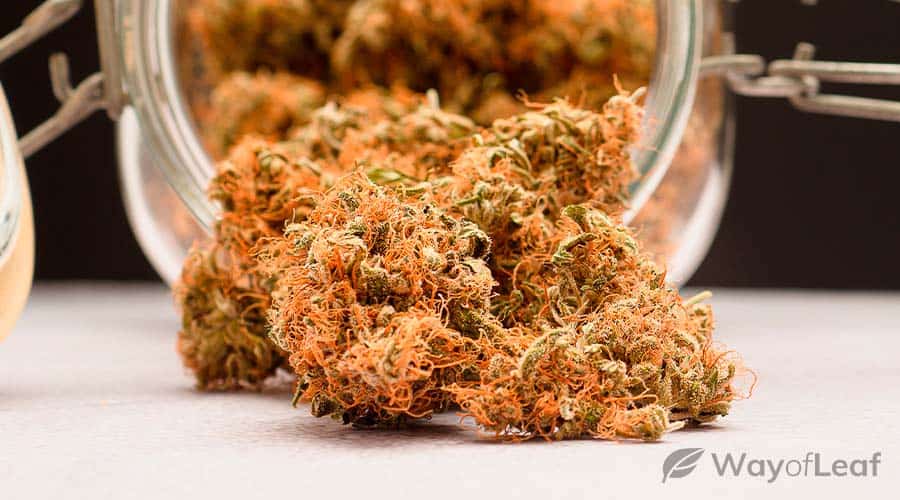 Another side effect associated with smoking Mimosa weed is the crash experienced later in the day after the initial euphoric high and energizing buzz has worn off.

Final Thoughts on the Mimosa Strain

Mimosa’s popularity is only increasing, and it is easy to see why. Its energizing and uplifting effects make smoking Mimosa weed an enjoyable experience for recreational and medicinal cannabis consumers.

However, its high THC content makes Mimosa a more suitable strain for an experienced rather than a novice cannabis user.